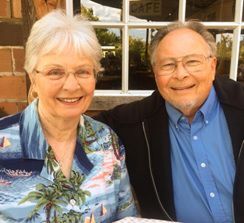 Sandra and Eugene Hoover on their 60th anniversary. 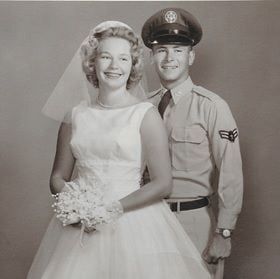 The Chapel at Carson City, Nevada, was the setting for nuptials on August 2, 1960, uniting Sandra (Sandy) McClure and Eugene (Gene) Hoover, both of Napa.

Reverend A. S. Shiriver, retired Presbyterian minister of Carson City, officiated at the ceremony, which was attended by relatives and friends.

Sandra remembers that Rev. Shiriver was a bit late for the ceremony. He had been fishing out back and came in wearing his waders and carrying a fishing pole. It only took him a few minutes to remove the fishing gear to present himself properly.

The couple had met in Napa when Gene’s family moved across the street from Sandy’s family in 1957.

Following the nuptials, the couple lived at Edwards Air Force Base in Southern California while Gene completed his military assignment.

They have lived in Sacramento, Reno, and Orangevale and Roseville, California, while Gene pursued his career with Equifax Insurance Services. Gene and Sandra owned a hardware store in Sacramento for some years, which kept them very busy.

Sandra is president of the Napa Valley Genealogical Society and has been a Senior Center Advisory Commissioner, a medical assistant and a seamstress for MGM.

They have two children and seven grandchildren who all live in Reno.

The couple plans on celebrating with family and friends next year when COVID-19 is no longer a threat.

We’re excited to celebrate your achievements. Share your accomplishments with the Napa Valley Register. Submit your news in our Virtual Newsroom.

Sandra and Eugene Hoover on their 60th anniversary.