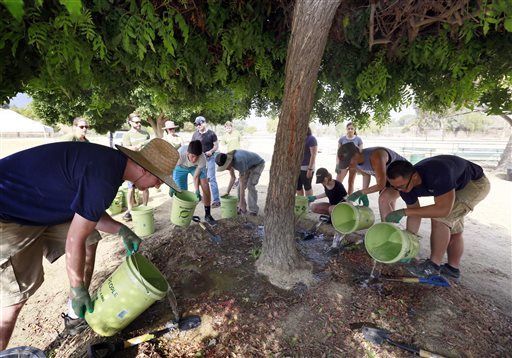 TreePeople volunteers water a tree at the Los Angeles Equestrian Center Martinez Arena in Griffith Park, Friday in Los Angeles. As Californians and the communities they live in cut back water usage and let lawns go golden, arborists and state officials are worrying about a potentially dangerous ripple effect. Nearby trees are going neglected and becoming diseased or dying. 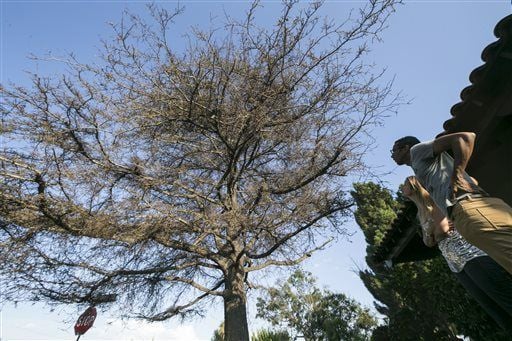 Residents Jean Lopes and his wife, Caroline, stand outside their home next to an old tree in Los Angeles. As Californians and the communities they live in cut back water usage and let lawns go golden, arborists and state officials are worrying about a potentially dangerous ripple effect. Nearby trees are going neglected and becoming diseased or dying.

LOS ANGELES — As Californians and the cities they live in cut back water use and let lawns turn brown, arborists and state officials are worrying about a potentially dangerous ripple effect: City trees going neglected and becoming diseased or even collapsing.

With cities ordered to reduce water use by 25 percent during the state’s four-year drought, many residents are turning off sprinklers — not realizing that trees can be permanently damaged by a sudden reduction in the amount of water they receive.

“You don’t want to be cutting back the water to the trees,” said Ruben Green, an arborist with Evergreen Arborist Consultants in Los Angeles. “The tree can’t adjust.”

Across the state, 12 million trees died over the past year due to lack of water, according to the U.S. Forest Service. While the bulk of those deaths occurred outside urban areas, conservationists and officials are now focusing on cities, where mandated water reductions are becoming visible in drying limbs and scorched leaves.

Fears that parched trees could pose a danger were heightened this week when a 75-year-old, 75-foot-tall pine tree fell on a group of kids from a camp at a Southern California children’s museum, leaving a boy and girl hospitalized with serious injuries. An independent arborist and another from the city of Pasadena are conducting an investigation into the cause, which has not been determined to be drought-related.

Green visited the site of Tuesday’s tree collapse and said it appeared unlikely the drought was to blame because the area around the tree looked well irrigated and its root system appeared compromised — a sign of rot, decay or injury, not necessarily the drought.

Los Angeles alone has more than 25 square miles of parks and some 327,000 trees.

Green and other arborists said they have seen an increase in the number of diseased trees in the city. As they get less water, they become more prone to illness caused by pests. In addition to bark beetles, Green has seen a newer pest drilling tunnels in the trunks of “dozens and dozens of trees.”

Arborists say the number of falling trees and limbs does not appear to have risen in Los Angeles, but there are concerns that could be next. They also are worried that if a strong El Nino brings a wet California winter, already distressed trees will collapse when a storm hits.

“We’re really right on the brink of starting to face more serious issues,” said Cindy Blain, executive director of California ReLeaf, a nonprofit network of urban and community foresting groups around the state. “This is a critical time.”

A new six-person crew removes potentially hazardous trees from Los Angeles parks. So far this year, it has moved out 550 trees — surpassing the 300 removed in an average year.

“They are starting to fail due to the drought, and we want to make sure these trees don’t potentially pose a hazard to the public,” said Laura Baurenfeind, principal forester with the city parks department.

Turf areas in city parks are being watered three times a week, down from at least five when drought regulations were not in place. To help nearby trees compensate, the city and nonprofits are installing makeshift basins to filter water to trees.

Meanwhile, a public education campaign is underway. California ReLeaf has partnered with Save Our Water, a coalition of the California Department of Water Resources and Association of California Water Agencies, to better inform residents about proper tree care during the drought.

Blain said many of the people she’s spoken with say they have forgotten about their trees or gotten worried and began watering at the tree’s base. Trees should be watered from the edge of their canopy.

If a tree goes too long without enough water, it will become unable to soak up liquid at all.

Like many Californians, Bruce Birkett has reduced lawn watering at his childhood home in Los Angeles in response to the drought. Recently, though, he’s watched in grief as the giant cedar in the front yard became brittle and brown.

“That was hard,” he said, “watching this lovely tree looking poor.”

Beekeeping an essential service during pandemic

WASHINGTON — "Excuse me, can I ask what you're doing here?" a resident in a southeast Washington neighborhood asks as Sean Kennedy and Erin Gleeson get out of their truck and scour the streets.

Faith in protest as young people find fervor on the street

“I can’t breathe!’” the crowd chanted, invoking the dying words spoken by George Floyd as a white police officer pressed a knee into his neck.

A father, a sister, a son: Beirut blast takes a heavy toll

BEIRUT — A close twin sister, now separated forever. An attentive and doting husband who sacrificed for his family and promised his wife the moon. A student financing his education by working double shifts at Beirut's busy port.

Relief bill up in the air

WASHINGTON — Negotiators on a huge coronavirus relief bill reported slight progress after talks resumed Monday afternoon in the Capitol, with issues like food for the poor and aid to schools struggling to reopen safely assuming a higher profile in the talks.

JACKSON, Miss. — Magnolias and stars. Crosses and guitars. Beer cans and crawfish. A Gulf Coast lighthouse. Elvis Presley and Kermit the Frog. All appear on proposals the general public submitted for a new Mississippi flag.

Lack of study and oversight raises concerns about tear gas

SALEM, Ore. — On June 2, Justin LaFrancois attended a protest against police violence and racism in downtown Charlotte, North Carolina, where he planned to livestream the event for his alternative newspaper’s website.

U.S. testing for the coronavirus is dropping even as infections remain high and the death toll rises by more than 1,000 a day, a worrisome trend that officials attribute largely to Americans getting discouraged over having to wait hours to get a test and days or weeks to learn the results.

TreePeople volunteers water a tree at the Los Angeles Equestrian Center Martinez Arena in Griffith Park, Friday in Los Angeles. As Californians and the communities they live in cut back water usage and let lawns go golden, arborists and state officials are worrying about a potentially dangerous ripple effect. Nearby trees are going neglected and becoming diseased or dying.

Residents Jean Lopes and his wife, Caroline, stand outside their home next to an old tree in Los Angeles. As Californians and the communities they live in cut back water usage and let lawns go golden, arborists and state officials are worrying about a potentially dangerous ripple effect. Nearby trees are going neglected and becoming diseased or dying.