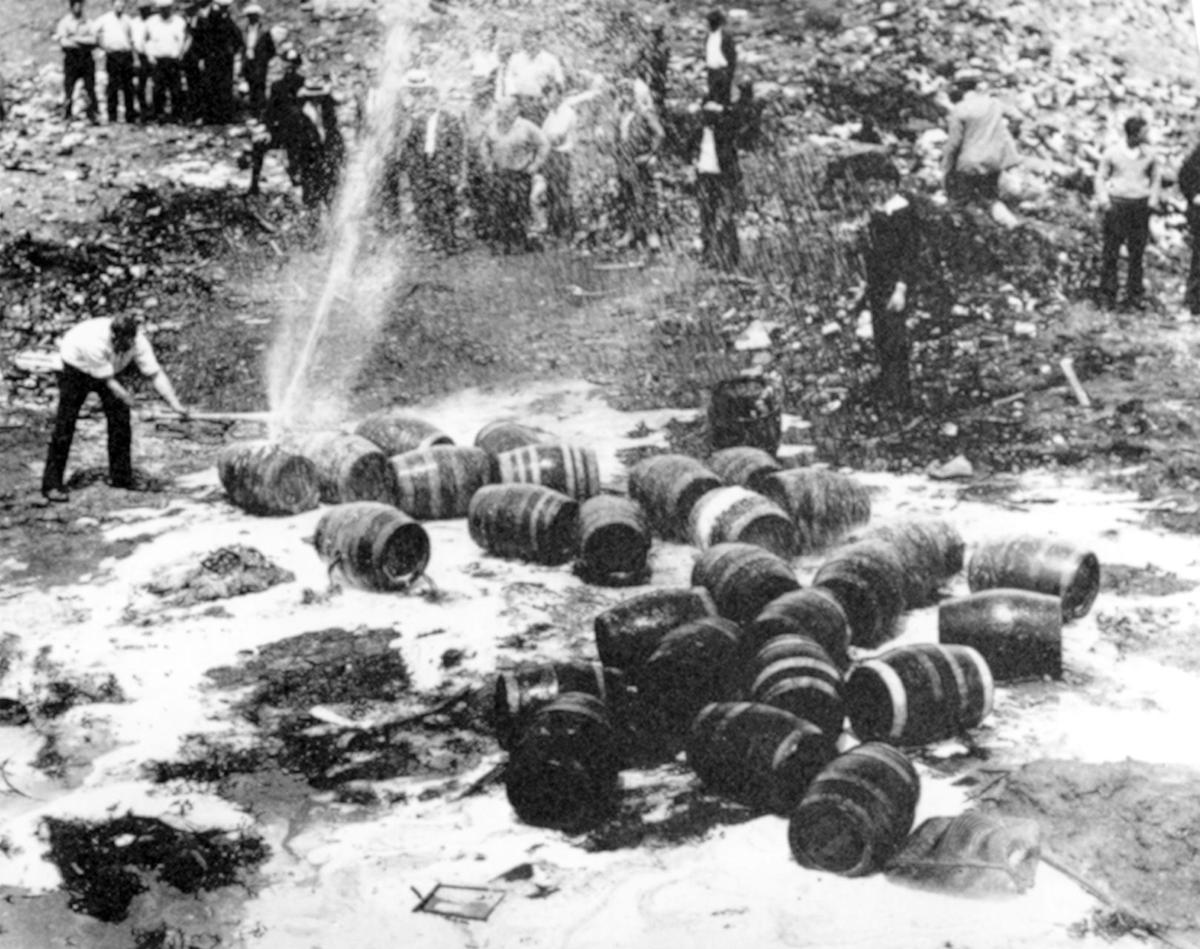 In this June 18, 1931, file photo beer barrels are destroyed by prohibition agents at a dump in New York City. The federal government, as well as state and local authorities, spent huge sums on enforcement yet never allocated sufficient resources to do the job effectively. Bootleggers awash in cash bribed judges, politicians and law enforcement officers to let their operations continue. 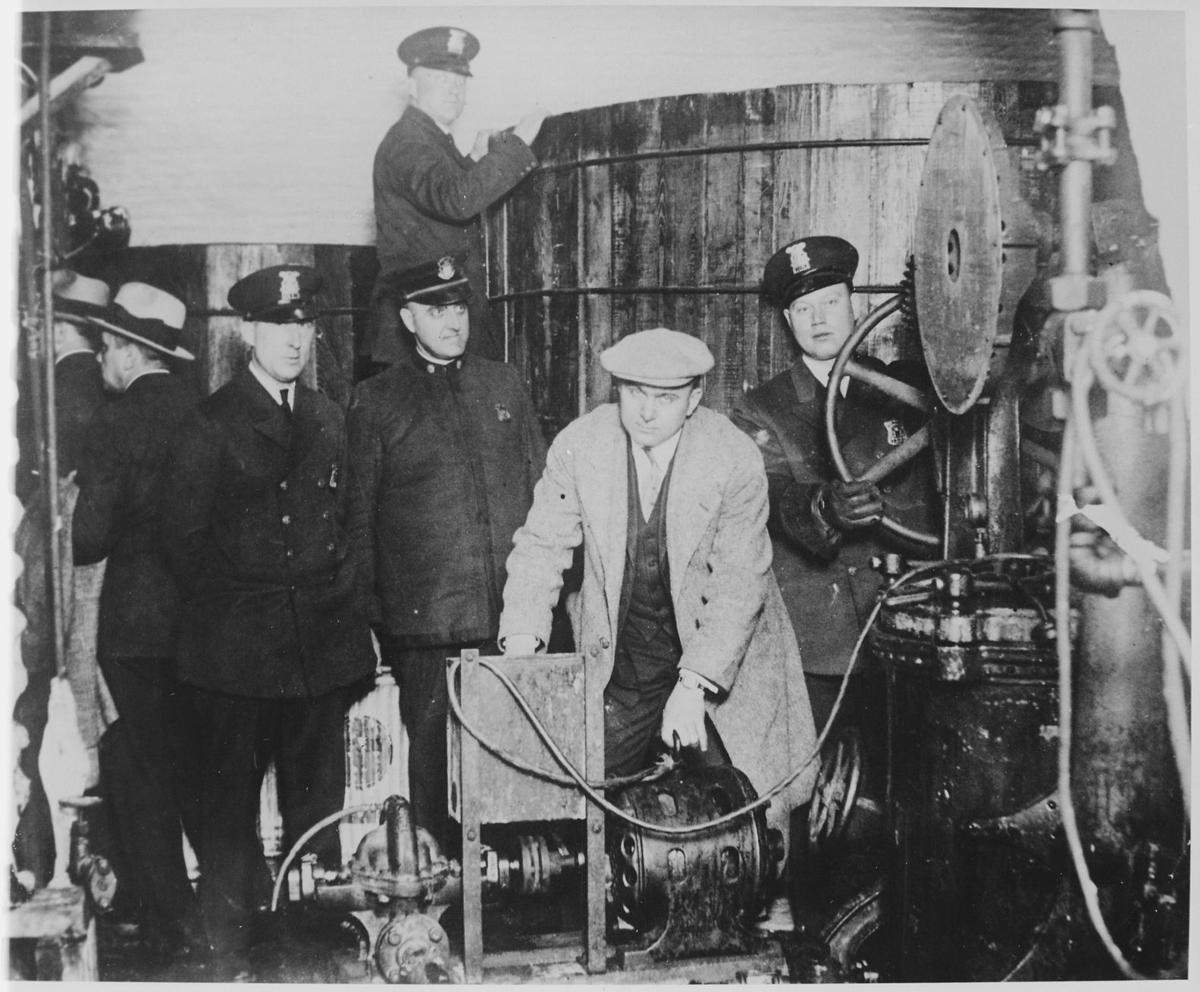 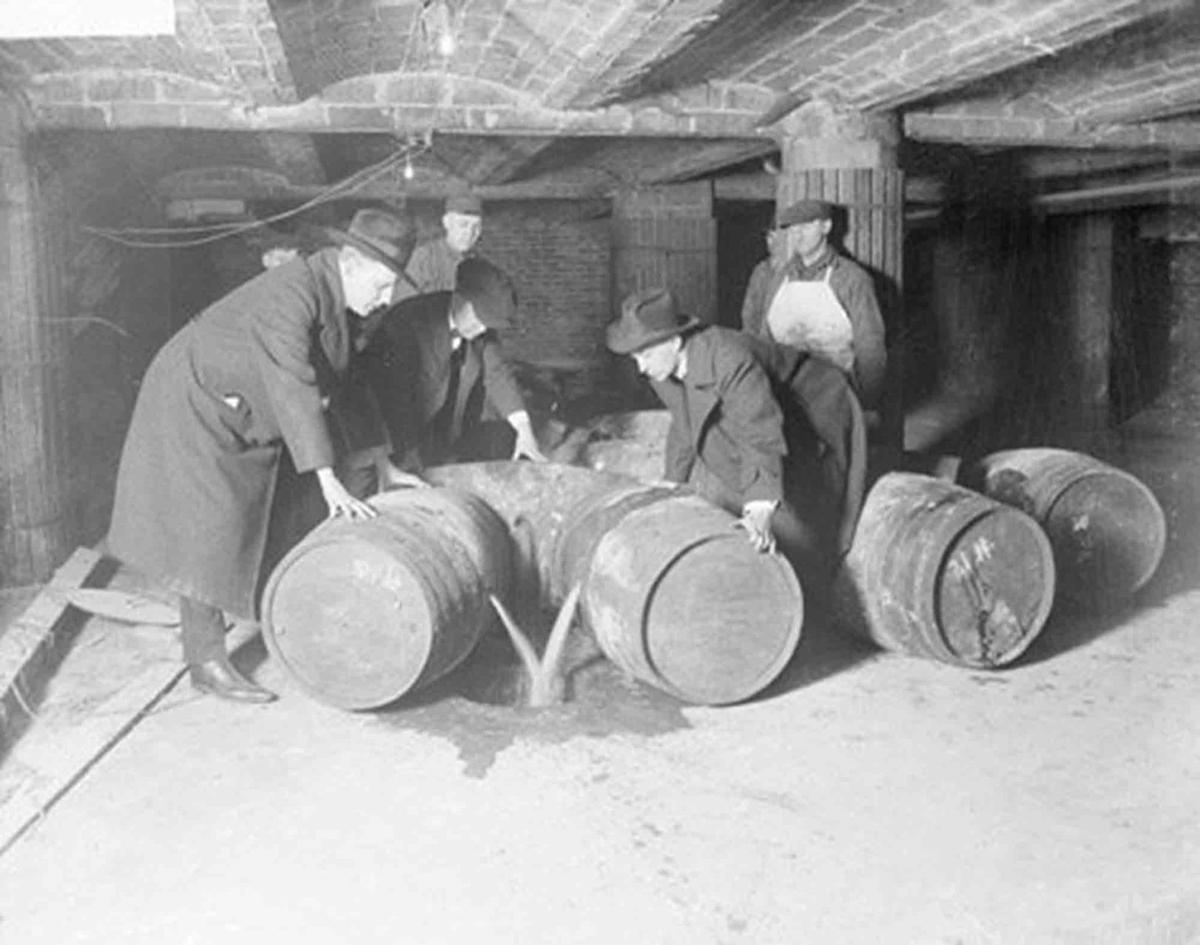 NEW YORK — In this era of bottomless mimosas, craft beers and ever-present happy hours, it’s striking to recall that 100 years ago the United States imposed a nationwide ban on the production and sale of all types of alcohol.

The Prohibition Era, which lasted from Jan. 17, 1920, until December 1933, is now viewed as a failed experiment that glamorized illegal drinking, but there are several intriguing parallels in current times.

Americans are consuming more alcohol per capita now than in the time leading up to Prohibition, when alcohol opponents successfully made the case that excessive drinking was ruining family life. More states are also moving to decriminalize marijuana, with legalization backers frequently citing Prohibition’s failures. Many of the same speakeasy locations operating in the 1920s are flourishing in a culture that romanticizes the era.

And in a time of heightened racial divisions, Prohibition offers a poignant history lesson on how the restrictions targeted blacks and recent immigrants more harshly than other communities. That treatment eventually propelled many of those marginalized Americans into the Democratic Party, which engineered Prohibition’s repeal.

“Prohibition had a lot of unintended consequences that backfired on the people who worked so hard to establish the law,” said Harvard history professor Lisa McGirr, whose 2015 book “The War on Alcohol” examines Prohibition’s political and social repercussions.

“It helped to activate and enfranchise men and women who had not been part of the political process earlier,” she said. “That was not the intention of Prohibition supporters.”

Ratification of the 18th Amendment in 1919, which set the stage for Prohibition’s launch a year later, culminated a century of advocacy by the temperance movement. Leading forces included the Women’s Christian Temperance Union, the Anti-Saloon League and many Protestant denominations. Prohibition supporters assailed the impact of booze on families and the prominent role that saloons played in immigrant communities.

By the time the constitutional amendment was ratified in January 1919, many states had enacted their own prohibition laws. That October, Congress passed a law detailing how the federal government would enforce Prohibition. It was known as the Volstead Act in recognition of its foremost champion, Rep. Andrew Volstead of Minnesota. The law banned the manufacture, sale and transport of any “intoxicating liquor” — beverages with an alcohol content of more than 0.5%, including beer and wine.

Prohibition was a death knell for California’s then-burgeoning wine industry, which had begun in the late 19th century. Winemakers and grape growers, the continuation of their principal livelihood now a federal crime, struggled to stay afloat in Napa and Sonoma.

Some abandoned their wineries completely; leaving the skeletons of buildings nestled into the Valley’s hillsides. Others destroyed their wineries altogether, burning their wooden frames. Still others turned to making religious wine for Catholic and Jewish communities or continued work on a smaller scale, producing alcohol for the black market or finding alternative uses for their grapes.

“The future prospects of wine grape growers in Napa Valley are a long way from being gloomy, despite the advent of prohibition,” a Napa Valley Register article from 1920 reads, noting that grape buyers from St. Helena had come to Napa to purchase wine grapes at $30 per ton (about $384, in today’s dollars). They’d come on behalf of the Sunseri Fruit Company, which sought to produce grape juice and grape syrup, the article says.

Another article from September of 1934, just months after Prohibition’s repeal, talks of Napa as one of the counties to take first place for dry wines in the California state fair.

“For the first time in 14 years, the wine was exhibited legally,” the article reads, “and there was every evidence that the wine industry was returning to pre-prohibition levels.”

1934 may have marked the beginning of the end of the wine industry’s decline, but its recovery was a slow one. Robert Mondavi’s construction of his eponymous winery in 1966 marked the addition of the first large-scale winery to the valley since Louis M. Martini finished construction on his own winery in 1933. More than a third of a century had passed without a new winery in Napa Valley.

Mondavi’s would prove to be the gateway for a new generation of wineries – and wine consumers.

Statistically, Prohibition was not an utter failure. Deaths from alcohol-related cirrhosis declined, as did arrests for public drunkenness.

McSorley’s Old Ale House, established in New York in 1854 and still flourishing as one of the city’s oldest bars, never closed during Prohibition. Ostensibly, it served “near beer” with permissibly low alcohol content, but in fact produced a strong ale from a makeshift brewery erected in the basement.

“It wasn’t a near beer. It was McSorley’s ale,” said the pub’s manager, Gregory de la Haba. “At least once a week, people ask, ‘What did we do during Prohibition?’ And my reply, ‘We made a ton of money.’’’

The federal government, as well as state and local authorities, spent huge sums on enforcement yet never allocated sufficient resources to do the job effectively. Bootleggers awash in cash bribed judges, politicians and law enforcement officers to let their operations continue.

“Newly hired and poorly trained Prohibition agents, along with local and state police, targeted violators at the margins,” McGirr wrote in a recent article. “But they lacked the capacity, and at times the will, to go after powerful crime kingpins.”

It’s simplistic to say Prohibition created organized crime in America, but it fueled a huge expansion as local crime gangs collaborated with those from other regions to establish shipping systems and set prices for bootlegged alcohol.

Beneficiaries included Chicago-based gangster Al Capone, who earned tens of millions of dollars annually from bootlegging and speakeasies. In the infamous St. Valentine’s Day Massacre of 1929, gunmen disguised as police officers killed seven men from a gang that sought to compete with Capone’s empire.

Beyond the ranks of gangsters, legions of Americans were committing or abetting crime. Michael Lerner, in his book “Dry Manhattan: Prohibition in New York City,” says courtrooms and jails were so overwhelmed that judges began accepting plea bargains, “making it a common practice in American jurisprudence for the first time.”

Anti-immigrant sentiment was a key factor behind Prohibition, partly because of record-high immigration in the preceding decades.

“Often the political machines run by the bosses were based in these saloons, or used them as a conduit for extending favors,” Cowan said. “So there was concern about political corruption, changing social values, immigrants learning radical politics.”

Prohibition’s start in 1920 coincided with a major expansion of the Ku Klux Klan, which supported the ban on alcohol as it waged its anti-immigrant, anti-Catholic and racist activities.

The Volstead Act “provided a way for the Klan to legitimize its 100% Americanist mission — it could target the drinking of those they perceived to be their enemies,” McGirr said.

Area wineries fear they will become collateral damage in an escalating trade war between the U.S. and France.

Napa's growers ahead of state-wide ban on harmful pesticide chlorpyrifos

Chlorpyrifos, once commonly used on wine grapes, will be banned in California.

There are a world of adjectives that exist to describe wine. At Hagafen Cellars, 'kosher' is one of them - but just one.

Vintner Gerry Rowland is diversifying from Napa wine to gin flavored with botanicals.

In this June 18, 1931, file photo beer barrels are destroyed by prohibition agents at a dump in New York City. The federal government, as well as state and local authorities, spent huge sums on enforcement yet never allocated sufficient resources to do the job effectively. Bootleggers awash in cash bribed judges, politicians and law enforcement officers to let their operations continue.