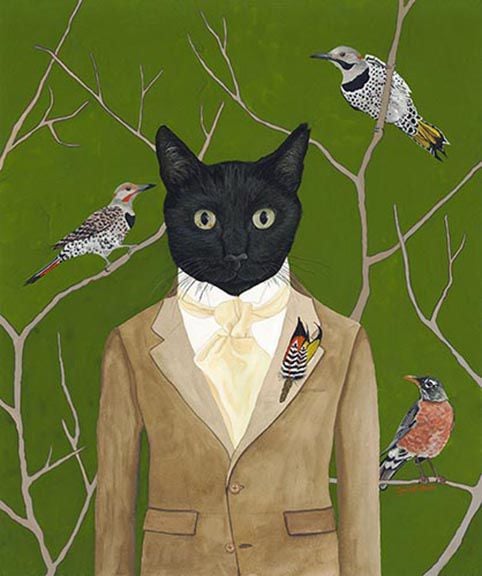 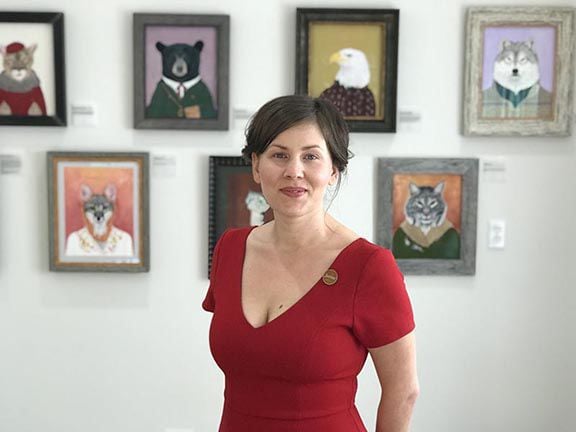 Jamie L. Luoto stands in front of her animal portraits. Her work is on exhibit at the Napa Main Library this month. 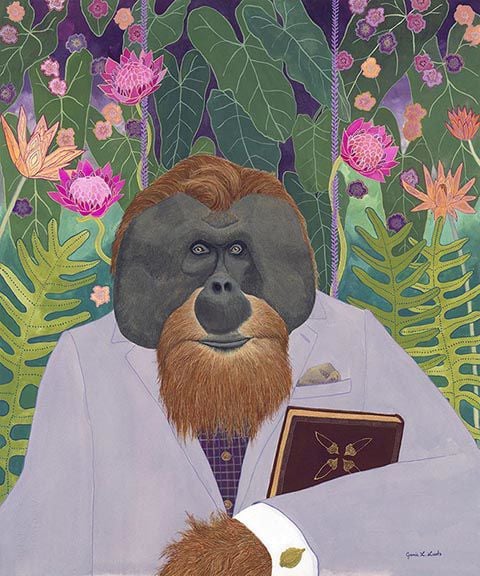 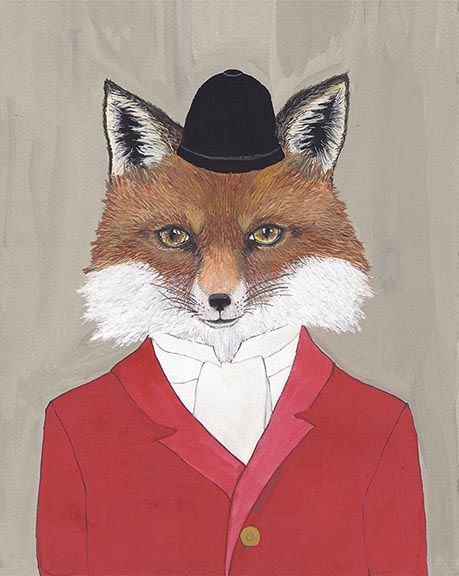 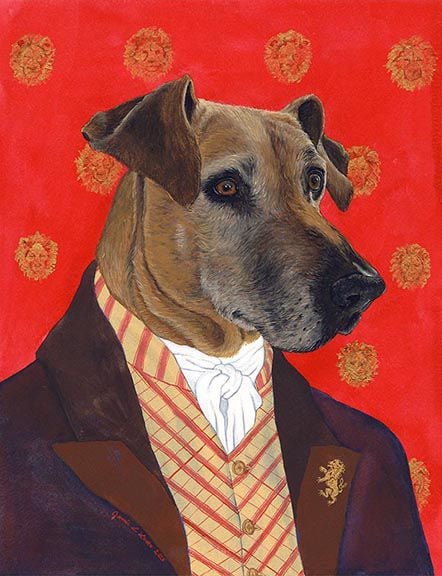 Jamie L. Luoto stands in front of her animal portraits. Her work is on exhibit at the Napa Main Library this month.

The faces of the animals in Jamie L. Luoto’s paintings are so realistic they could almost be mistaken for photographs. Their soulful eyes appear to be gazing straight into the eyes of the viewer.

On exhibit at the Napa Main Library this month, Luoto’s paintings depict 27 different animals, ranging from wild animals, native to this area such as a bobcat and a rattlesnake, to jestic, exotic creatures like an elephant and orangutan, to “some very special” dogs and cats.

She specializes in animal portraiture that explores themes of identity. Like a modern day Beatrix Potter, Luoto’s animals, sporting stylish clothing, are anthropomorphically presented as if they were portraits of “kith and kin.”

Luoto will share stories about these animals and reveal secrets behind how and why she makes what she does at a wine and hors d’ oeuvres reception for her exhibit from 6-7:30 p.m. on Friday, July 12. An artist talk is scheduled for 6:30 p.m. Admission is free.

For the last 15 years, Luoto, a Healdsburg, California artist originally from Minnesota, has been selling her paintings, which include self and society portraits, in this country and abroad. Her work can be found in public and private collections in 14 countries around the world.

“I’m excited about having my work in the Napa library. When I was younger, I worked in four different libraries. It’s great being around books and it is nice to see a library used like this one,” Luoto said during an interview in the library after she completed hanging her paintings.

“I use my art to explore themes of identity in ourselves and the world around us, including animals,” she said. “Identity has been a lifelong fascination of mine. I’ll be explaining more in my talk (at the reception).

Pointing to various paintings, she disclosed details about the animals in them.

“I see the animals as visitors to the library in their own way, sharing the wonderful energy of imagination, curiosity, and discovery with the Napa community,” Luoto said.

The “noble” polar bear, in one painting, is “an activist” marching for science to bring awareness of climate change.

An arctic hare in another is one of the animals the polar bear is “standing up for.”

A mountain lion, dressed as a wealthy woman, is representative of female entrepreneurs and business leaders. She is one of three North American animals Luoto made in 2017, portrayed as female, to explore the role of gender.

A well-dressed black bear represents women in science. “She’s a naturalist,” Luoto explained. “The bald eagle is representative of women in politics.”

Many of her paintings have been commissioned by pet owners. These are usually beloved dogs or cats.

An exception is a painting of an orangutan that was commissioned by a family who loved orangutans.

“This is special to me,” she said. “It was after the fire in Sonoma County. The family that commissioned it lost their home in the fire. When I started this piece, I made a connection of habitat loss for orangutans with their forests being burned and the loss of the family’s habitat. The California live oak climbing over the orangutan’s journal ties both places together.”

All her paintings have “layers of stories” embedded in them.

“I think it is important for a work of art to have a deeper meaning,” Luoto said. “ Not only to be beautiful but to have substance.”

A close-up painting of a reindeer was inspired by Luoto’s journey to Finland to explore her ancestry. She is descended from the Sami people, semi-nomadic reindeer herders from near the Arctic circle in the Nordic countries.

Luoto can’t remember a time when she wasn’t an artist.

“I always knew this (art) was what I was supposed to do,” she said. “I knew I was an artist long before I even knew who I was. It’s the cornerstone of who I am and a way for me to understand and define my identity.”

She studied art at The School of the Art Institute of Chicago, The Perpich Center for Arts Education in Minnesota, and Nocciano Institute for Arts and Culture in Italy.

Luoto, the owner of three beloved cats, launched her animal portrait series when a friend was having a baby.

Combining her love of stories, animals, portraiture, narratives and art, Luoto was inspired to make a zebra painting as a gift for the newborn.

Shortly after painting the zebra, she was inspired to paint a “cheeky” red fox, dressed like an English fox hunter. “He’s got something to say to them about the fox hunt,” Luoto said.

“I invite visitors to the exhibit to look at each animal closely to challenge assumptions and inspire your own imagination and to develop a personal connection with one or two,”

Before she starts painting an animal, she does extensive research into the animal’s geographical location, diet, habitat, behavior.

She said that making her art is fun but labor intensive. Luoto uses different size brushes as she works, eventually using a needlepoint brush to get up close to see each of the brush strokes.

Luoto thinks of the animals in her paintings as friends and family. “They want to meet you. They want to have a one on one conversation with you,” she said. “It is hard to part with the originals, but I have the prints.”

Art in the library is sponsored by the Friends of the Library Foundation. The public is welcome to view the art and meet the artist who gives a talk about their work, process and inspirations.

A jury of local artists, a library commissioner and art in the library coordinator Stephnia Pramuk view all entries and make selections for the year.

The judging is blind, without identifying factors that could identify the artist.

The Napa Library has pre-selected materials to help children from pre-schoolers through third grade cope with difficult situations.

Get local Crime & Courts updates directly in your inbox!