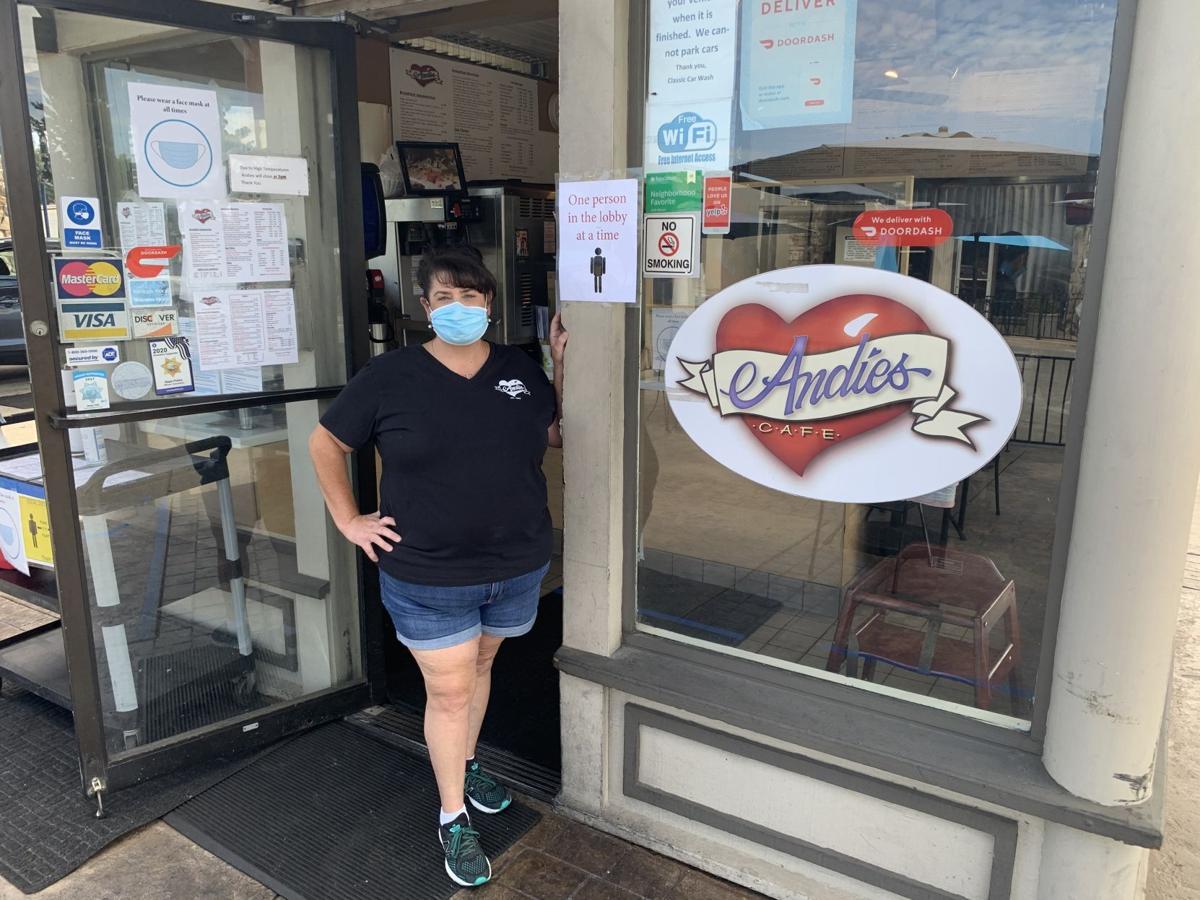 Andies Cafe owner Susie Kastella and her cafe are celebrating 25 years in business. 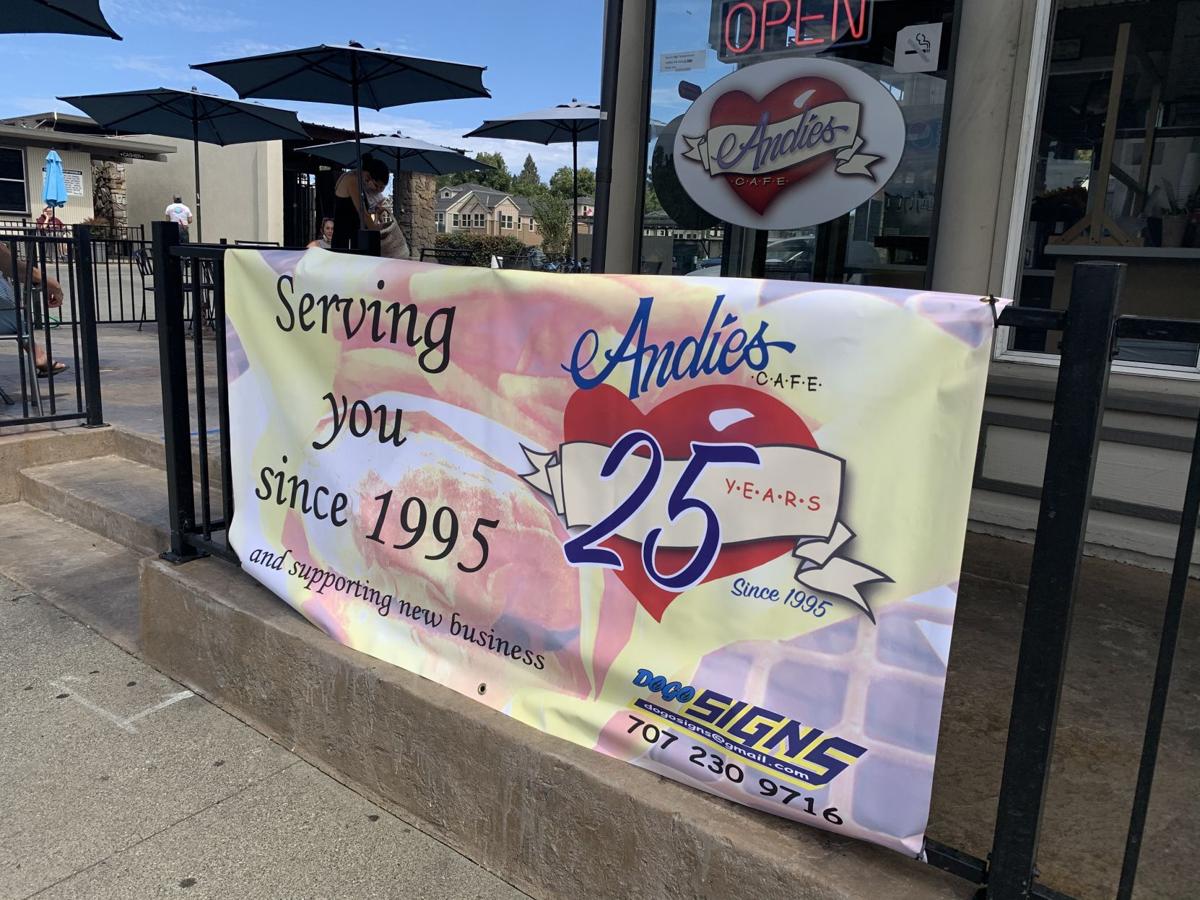 Located near the Napa Premium Outlets, Andies Cafe is celebrating 25 years of feeding  Napans -- and visitors. 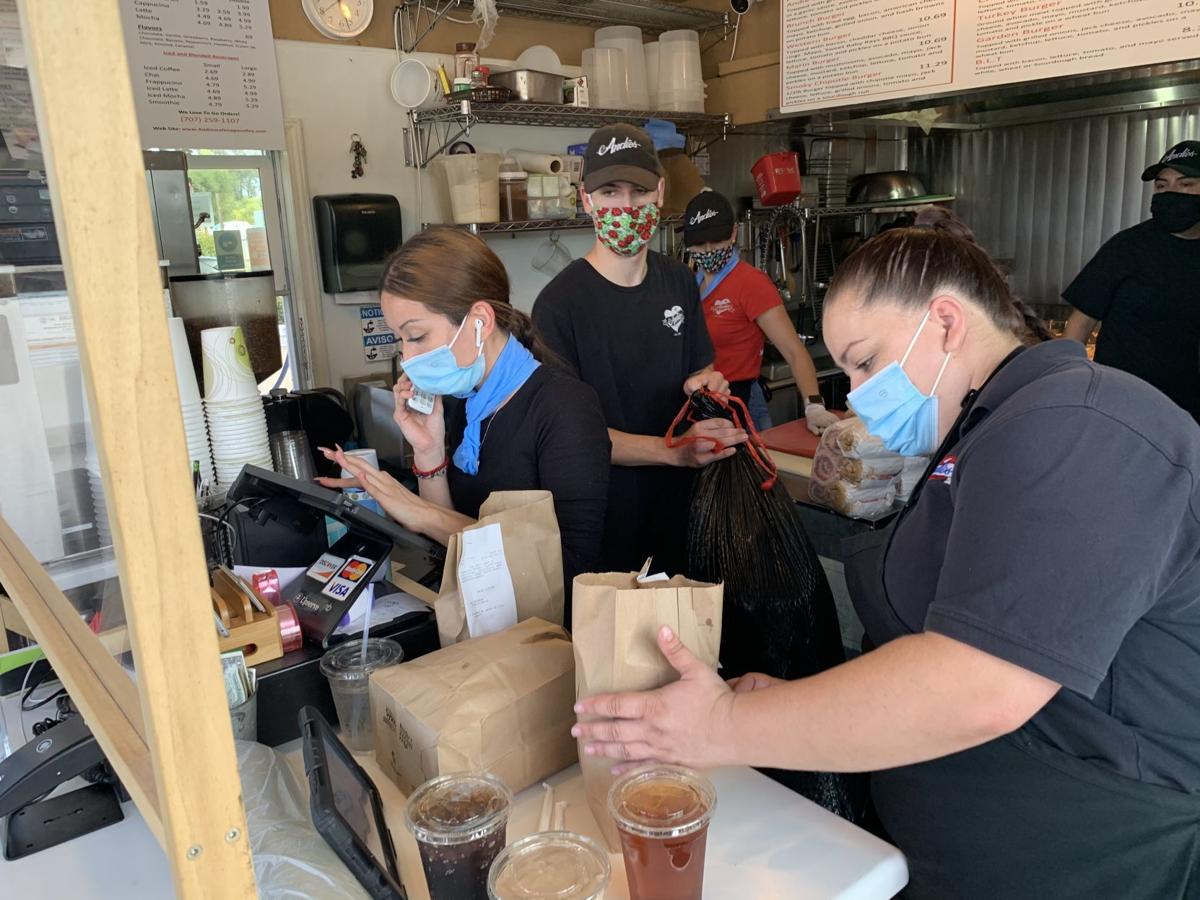 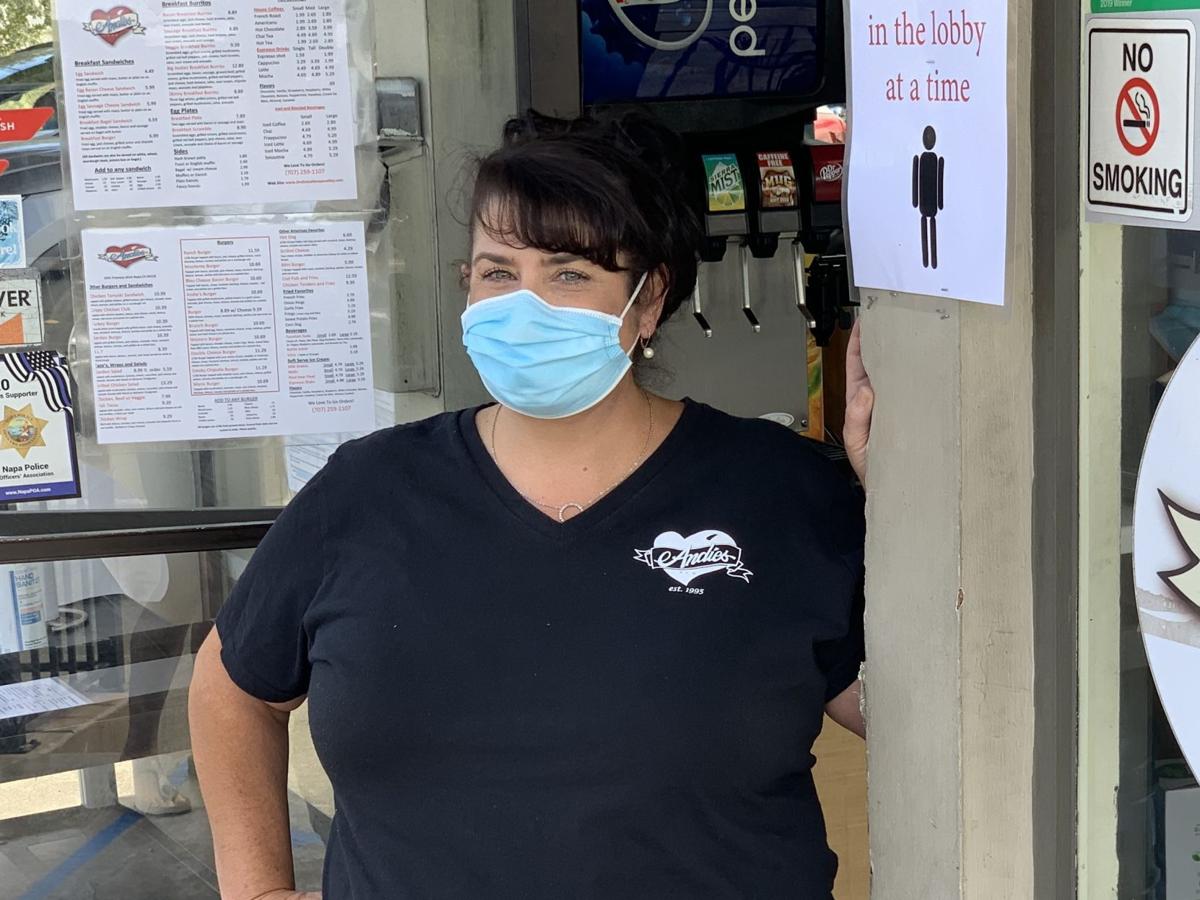 Andies Cafe owner Susie Kastella and the cafe, located on Freeway Drive next to a car wash, are celebrating 25 years. 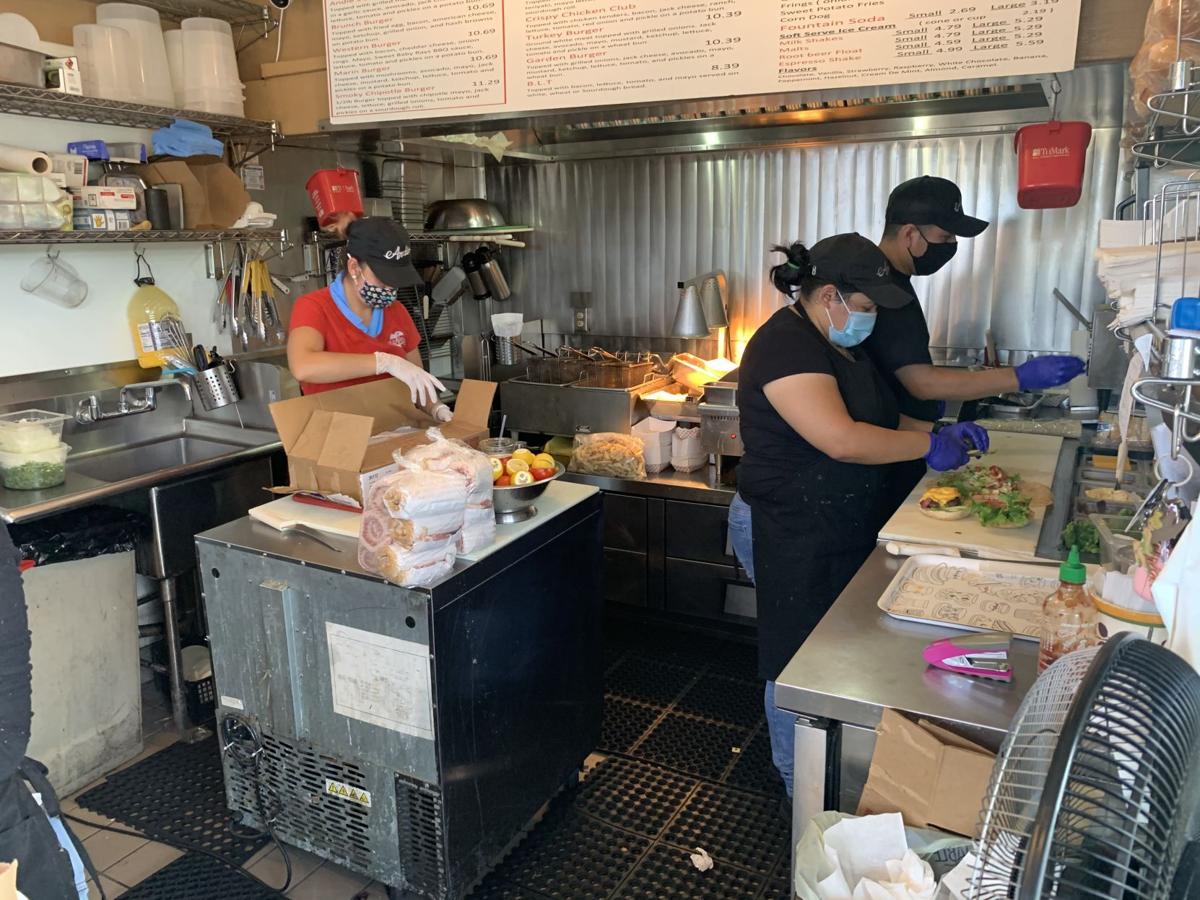 “Going to Andies Café is better than going to the hairdresser – you can hang out and catch up on people’s stories,” according to Traci Taylor-Perkins, a longtime loyal customer.

Formerly of Napa, the Vacaville resident said she’s been doing just that for 25 years, the precise amount of time that Susie Kastella has owned the place.

“She had just taken over when I met her,” Taylor-Perkins said.

“Service, friendship, community,” she said. “I was pregnant with my daughter then, and became addicted to (Susie Kastella’s) salsa and her pickles when I first started coming. I live in Vacaville now and still go at least twice a month. My daughter’s first job was there. (Susie) is just such a nice person and does so much for the community.”

“We bought it from another lady who owned it for two years — Andie Ames,” she said. “My grandfather had passed away and my grandmother didn’t have anything to do, and this seemed like a retirement opportunity.”

For Kastella’s mother, Sue Snook and her grandmother, Marie Snook, Andies became a place to meet and talk to people. But “it became too much for her and they decided to sell it off to me in 2000.”

A third-generation Napa native, Kastella had already worked at Andies, and in the meantime studied business at Santa Barbara City College, got married and raised two children, and was ready to take over its management, she said.

“When we opened the business, there was nothing in the place, and two people were working there. And $100 a day was a good day,” she said. “And I wanted to come home and this was a good fit. I started as a manager, and it just grew, and it’s been growing by leaps and bounds. We’ve been blessed.”

Among the most interesting and unusual aspects of Andies is that it operates from inside a car wash, and it remains a family affair, with both Kastella’s children and a series of nieces, nephews and cousins working or having worked there. And the family considers the larger community family, too, and regularly “gives back to the community, and people support me, as well,” she said.

Also supportive, is Kastella’s husband, Joseph, whose day job is as a technician for Image 2000, but who also takes care “of the honey-do list at the restaurant,” she said.

“If there’s a downside, it’s probably the worrying,” he said. “It’s not just you, but the employees and vendors and customers that get affected when something goes wrong.”

But Andies has made Susie into a local celebrity, he said.

“When we go out she’s always seeing people she knows,” he said. “Our employees are like family. We have a Christmas party where we get to be with them and their families. We’ve had a number of employees that have been with us eight-plus years and they bring their family members in to work.”

Susie Kastella said she thinks part of the restaurant’s success can be attributed to the consistency of the most popular “American cuisine” recipes used.

“Burgers, chicken sandwiches, BLTs, salads, and we’re known for our breakfast burritos,” she said. “We do about 600 of those a week, typically. We’re also known for our burgers.”

Andies didn’t have to reconfigure everything when the coronavirus pandemic hit, because it has always been a to-go business that also has a drive-through and only outdoor seating, Kastella said.

“We’re in the car wash, and when they closed from the pandemic, we took a hit. But, we’ve always been a to-go business and the DoorDash business exploded and the to-go also started to grow when we went touchless,” she said. “It’s been difficult, but we made it work.”

The car wash reopened in May, and things are returning to normal, she said.

“All my staffing came back and I’ve hired new people. It’s taken an upturn. I feel for the restaurants who aren’t set up for to-go. We’re blessed,” she said.

Others have taken note of Andies’ interesting location, she said.

“It’s unique to be inside a car wash. Other car wash companies have asked if we were interested in opening another place in theirs,” she said. “But, I’m not going anywhere. I’m able to stay in Napa, make a living, buy a house from my mother. I’m blessed.”

Kastella said the best part of her work is “seeing the regulars every day and giving them great food and making them happy. I even have some with dogs who get really excited because they know they’re coming to Andies.”

Everything isn’t always coming up rainbows, but Andies owners always try to find the silver lining in any dark cloud, she said.

“All kinds of things happen,” she said. “When the (2014 South Napa) earthquake hit, the underground sewer pipes broke and we had to re-pipe everything, but we took the opportunity to remodel,” she said.

The restaurant had to shut down for five weeks, but it all turned out OK, she said.

“I was blessed because I was insured, so it’s been upgraded. But it was pretty scary,” she said.

“The fires were pretty scary too. People were pretty grateful when they lost power during the fires that they could come in for a cup of coffee and see the news on TV just to see what was going on.”

And Andies is evidently a great employer. “We have a great time at work. Everybody loves their jobs and are thankful to have them right now for sure,” Kastella said.

Joseph Kastella says he is awed watching his wife stay on top of things at the café. “If we only had four Susie’s we wouldn’t need anyone else.”

In recognition of their 25th year in business, Andies’ owners have been offering some free items like ice cream and face masks, and planning a Fair Food Day to help take the sting out of the cancellation of this year’s Napa Town and Country Fair.

“There will be corn dogs and fries, onion rings and other deep fried goodies,” Susie Kastella said. “You can look up what and when on our Facebook page, Andies café.

Watch now: how to wash your hands — preschool style

American Canyon residents line up for 'S'mores and Meteors'

A mix of new and old found at Napa consignment shop

A car crashed into the front of Consign & Design last week, but new owner Katie O'Brien says the store will reopen shortly. In the meantime read on for more about one of Napa's few consignment stores.

Jessica Rockwood of Jean and Louise Handmade has found a unique way to preserve memories of loved ones: Memory Bears.

Napa businesswoman juggles a lot, adding business, even during pandemic

Andies Cafe owner Susie Kastella and her cafe are celebrating 25 years in business.

Located near the Napa Premium Outlets, Andies Cafe is celebrating 25 years of feeding  Napans -- and visitors.

Andies Cafe owner Susie Kastella and the cafe, located on Freeway Drive next to a car wash, are celebrating 25 years.