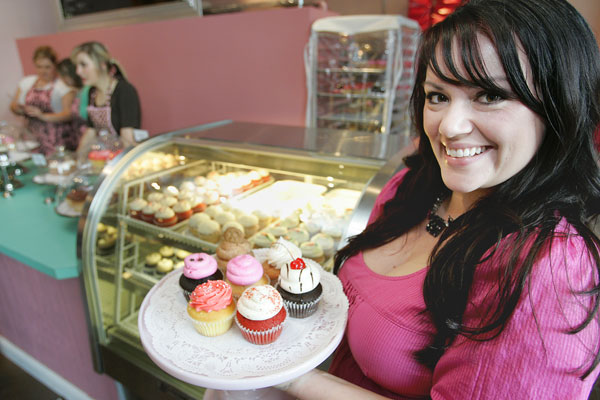 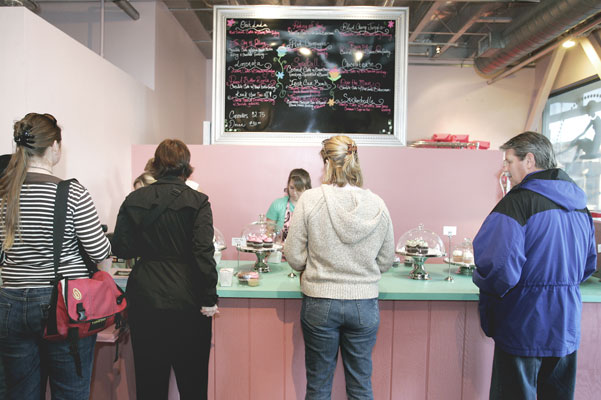 There’s nothing like a cupcake to put you in a good mood. Mix in some fashion and you’ve got one sweet combination.

Sift, a cupcakery, and Cake Plate, a fashion boutique, have joined forces to offer cupcakes and clothing to Main Street shoppers.

Andrea Mikami-Ballus is the baker behind Sift. In April 2008 she opened Sift’s first location, in Cotati. The businesswoman said she opened her bakery because she was in search of high-quality cupcakes. Finding the supply scarce, Mikami-Ballus decided to make her own using family recipes and others she adapted.

Consumers seem to be catching onto the cupcake craze. Mikami-Ballus said she sells more than 300 of the mini cakes a day in Cotati. “On Valentine’s Day we sold 1,500,” she said.

Many of her customers come from Napa County, and she has made many a trip over county lines delivering special orders for weddings and other events. “It just made sense logistically” to open a second store, said the baker.

Lindsay Kroll of Cake Plate, the downtown Napa boutique, met Mikami-Ballus while she was on a fact-finding trip in Napa. “We had this instant connection,” Kroll said.

Selling cupcakes inside Cake Plate, at 1000 Main St., Suite 100, is like the icing on the cupcake for Kroll. “I get phone calls at least once a day for something sweet, so this satisfies them.”

Kroll said it was easy to make room for Sift. The retail spot next to the Opera House was once a café, and the plumbing remained. After a minor remodel, Sift was ready to bake up some business.

At a recent Sift/Cake Plate grand re-opening party, Ian Stanley of Napa bought a snickerdoodle cupcake to go with his free Pinking-of-You cupcake. Stanley said he mistakenly thought Cake Plate was a bakery when it opened. Now that Sift is inside, Stanley said, “It’s the realization of my dream.”

“I would try the ‘Irish Car Bomb’ but I don’t know what a Guinness cupcake would taste like,” said Lauren McNerney of Napa. For the record, it’s made of chocolate and Guinness flavored cake with Irish cream frosting.

Lisa Rudell of Lafayette visited Napa for the afternoon. “Cupcakes seem to be the trend,” she said. They’re kind of like the donut of the ’90s.

Rudell said she prefers cupcakes because “they don’t have too many calories and they’re just so cute.”

Cynthia Caballero from Sonoma is a Sift fan. The red velvet is “to die for,” she said. “It’s become an addiction.”

Madison Moskowite, 13, shopped at Cake Plate with her mom while sampling Sift selections. “It was delicious,” she said of her treat.

“These are killer,” said her mom Ann Moskowite.

Sift cupcakes come with whimsical names like Black Cherry Jungle, Snowball, Over the Moon and Knock Your Sox Off. One of the most popular is the red velvet Oooh La La cupcake. The bakery makes 18 cupcake flavors daily, selling for $2.75 each or $30 for a dozen.

What does Mikami-Ballus say to the cupcake skeptic who’s not used to paying $2.75 for a morsel of cake?

First of all, people love cupcakes, she said.

“They’re small and they don’t have to share with anyone. And one cupcake is less calories than a slice of cake.” People don’t think twice about buying a cup of ice cream or a latte for about that same amount, Mikami-Ballus said. “It’s not that big a price tag for something that will make you very happy.”

Two other cupcake bakeries, one in the Oxbow Public Market, and one in Browns Valley, are also hoping to entice cupcake connoisseurs.

“Competition is good and I think there are enough cupcake lovers to go around,” Mikami-Ballus said.

“Cupcakes are here to stay.”

Judging from the lines seen in front of Yesenia Gallegos’ Sweet Straw Tea Bar, Napa’s only boba shop is already a hit.

'A new look for an old junk yard': Pick-n-Pull now open in AmCan

Ever shopped at Pick-n-Pull? The company's newest store is now located at 5759 Broadway St. in AmCan.

10 Questions: Business is sweet and 'Sunny' for Napan

What's new in Yountville? The Conservatory retail store has taken over the Forty Five Ten space on Washington St.

Americans are rapidly shrinking their credit card debt during the pandemic

Who's on the move? Napa County's latest home prices and sales.

What do you think of Napa artist Mikey Kelly's new artwork at First Street Napa?

Tom and John Mills' Common Cents: Consider this before you claim Social Security

Considering claiming Social Security? Tom and John Mills have some tips to think about before you decide.

Sift takes the (cup) cake
© Copyright 2020 Napa Valley Publishing, 1615 Soscol Ave. Napa, CA | Terms of Use | Privacy Policy | Do Not Sell My Info
Powered by BLOX Content Management System from TownNews.com.
You don't have any notifications.