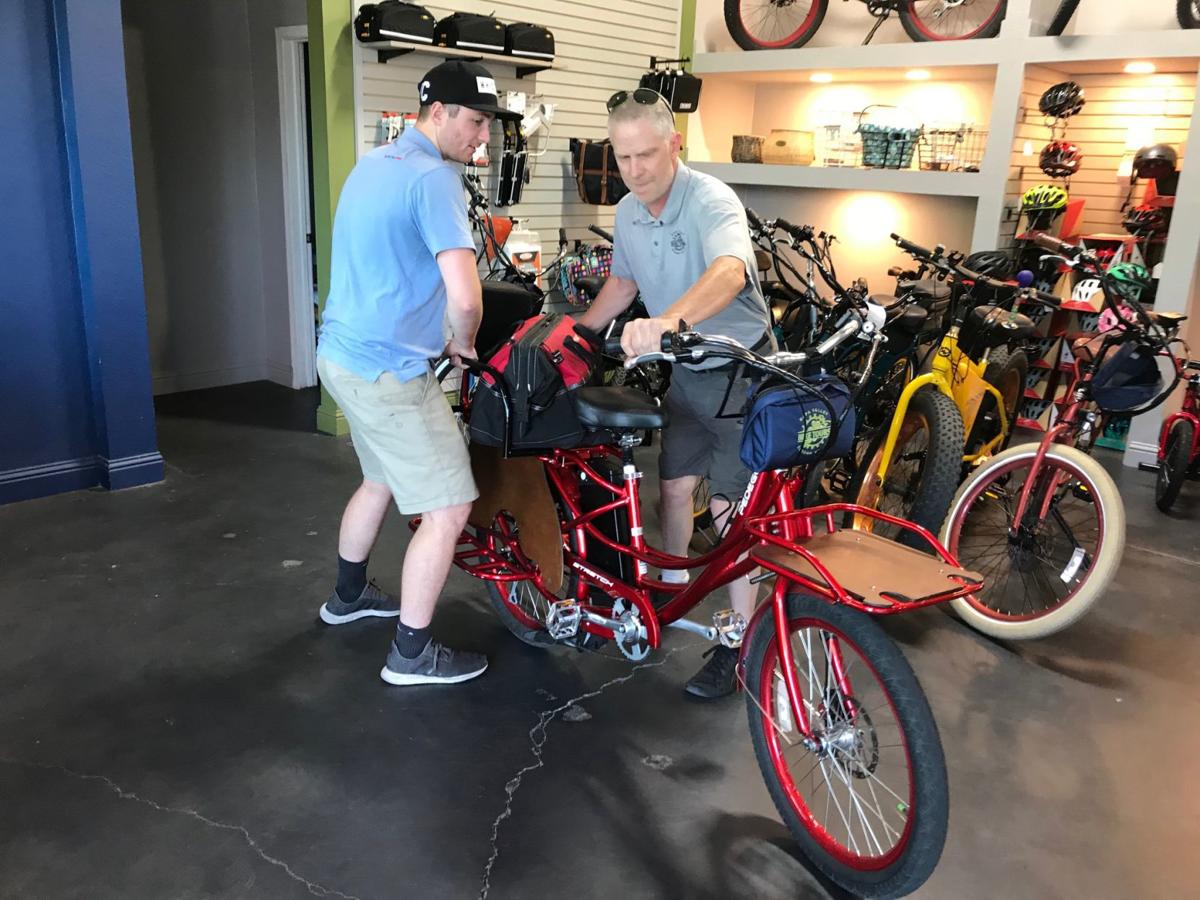 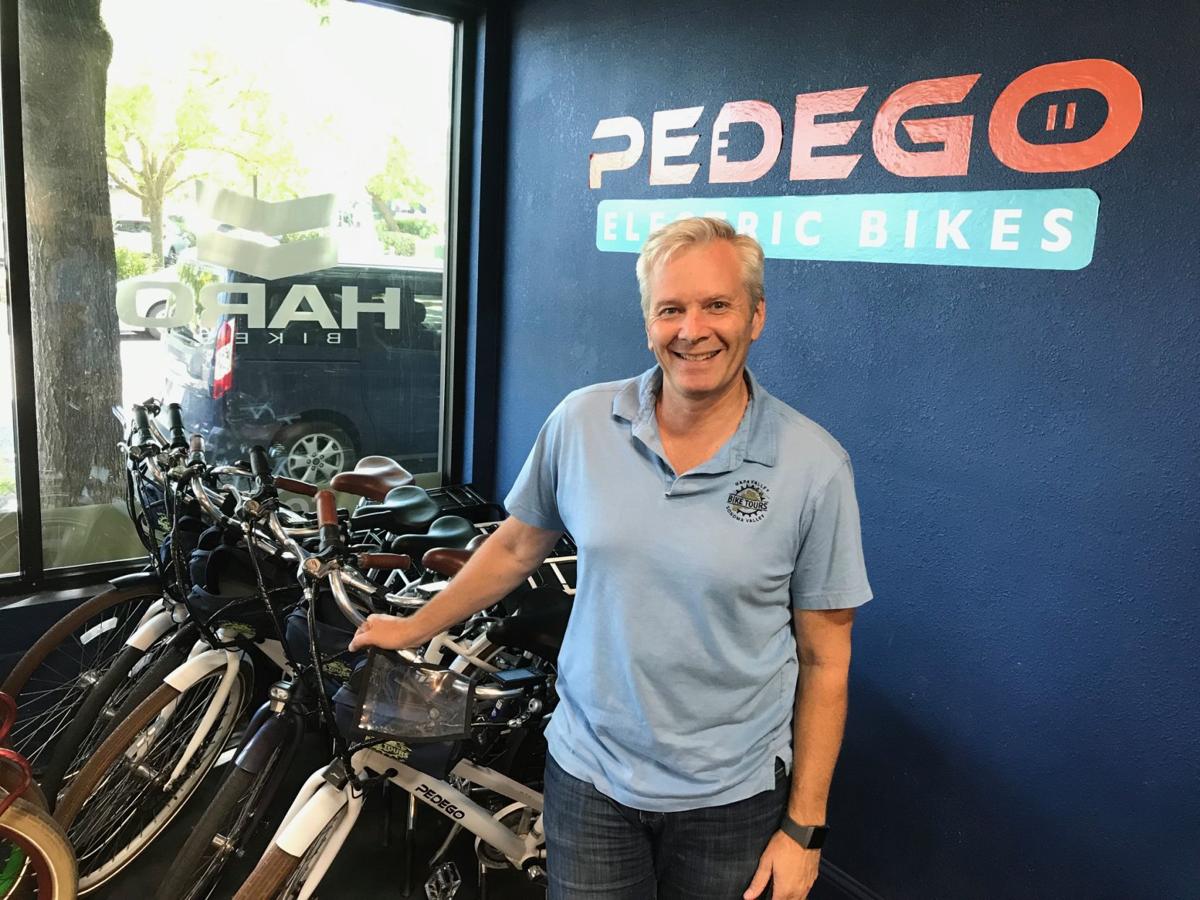 Brad Dropping is owner of Napa Valley Bike Shop. The business is located at Pearl and West Streets, kitty-corner from the parking lot that was once home to the Cinedome theater. 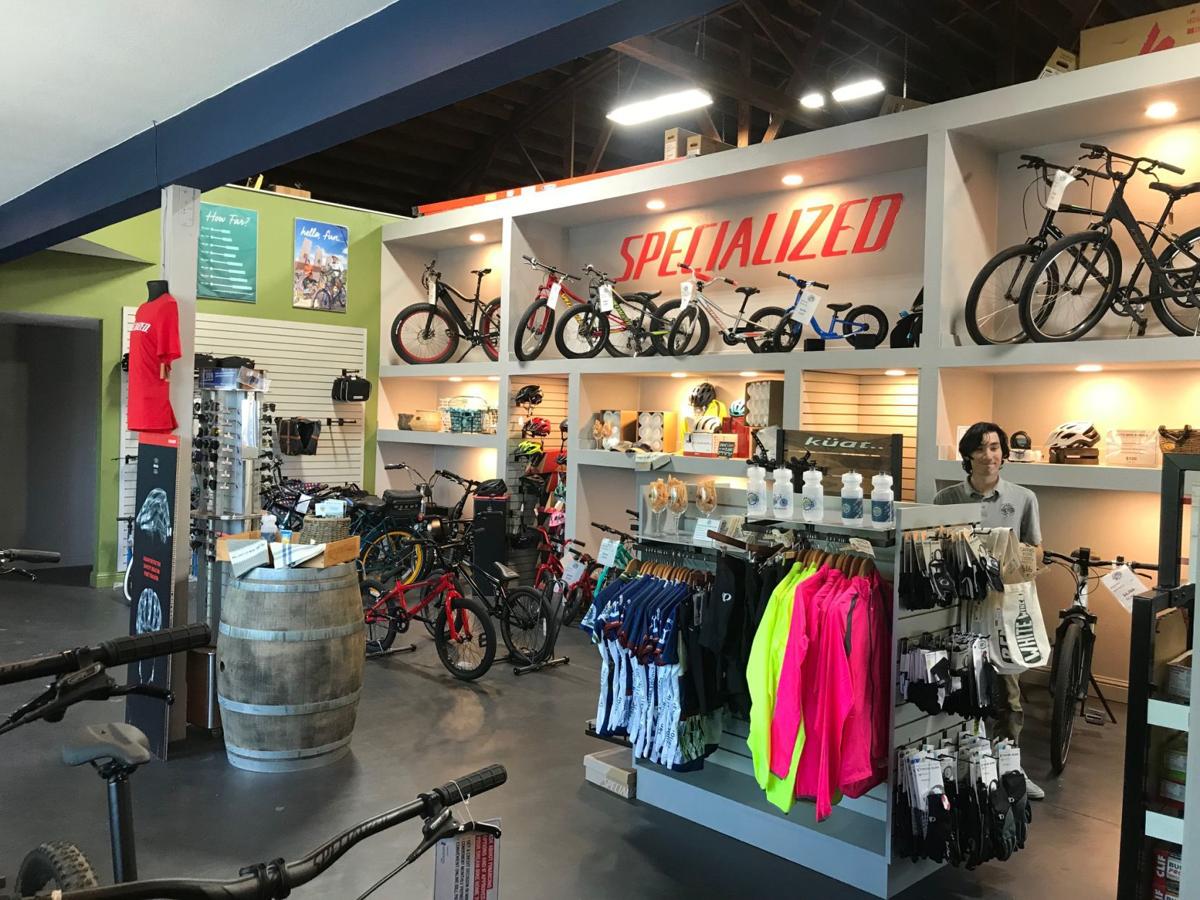 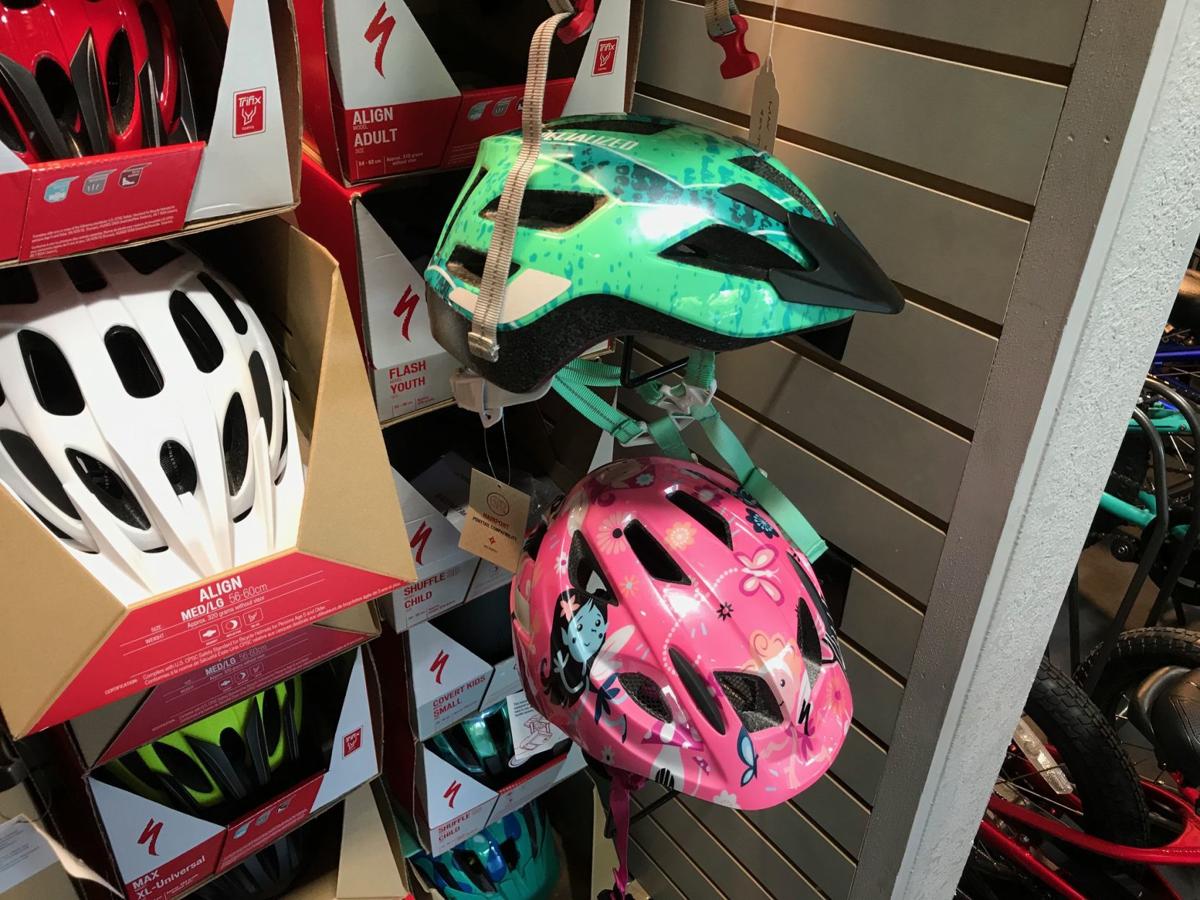 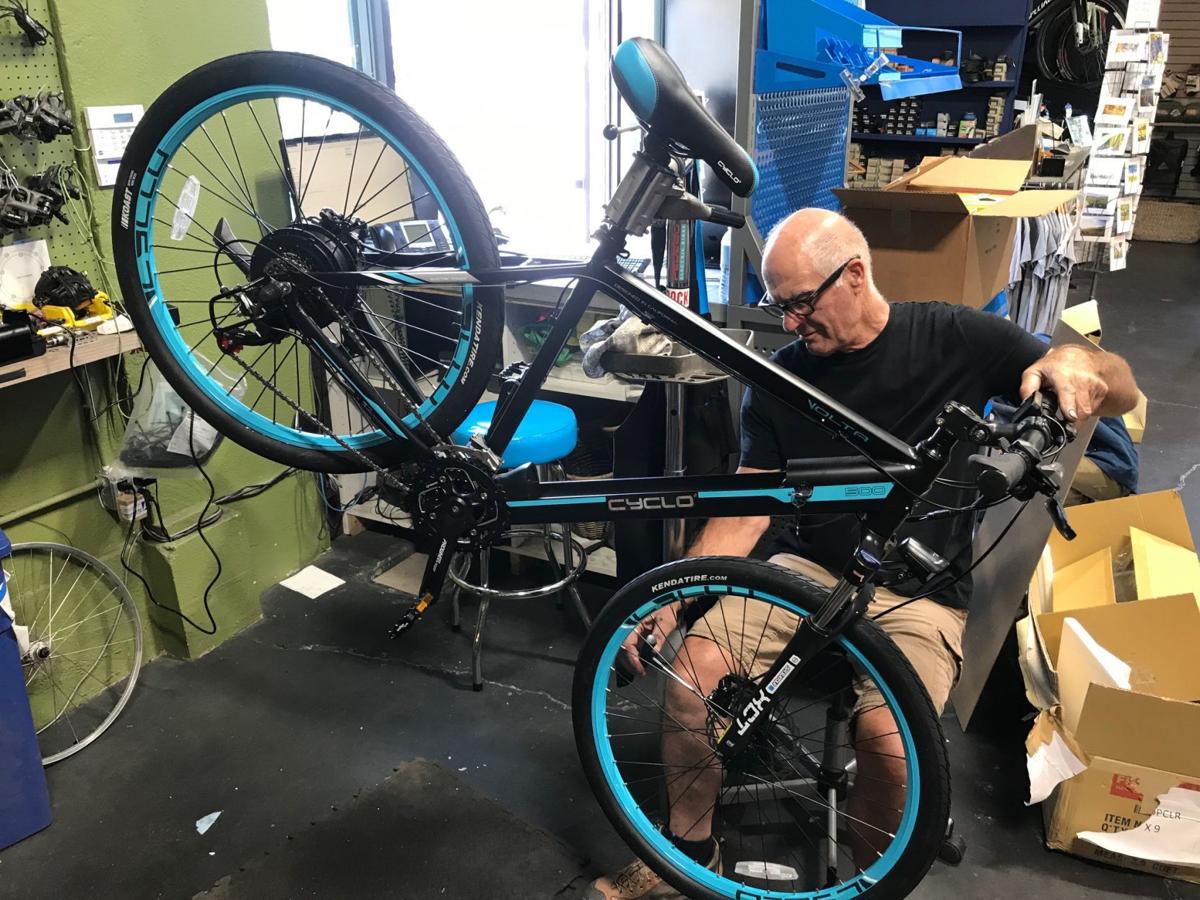 Tracy and Brad Dropping are from Atlanta. They had a good life there, but like many people who visit Napa, always thought that this is where they would eventually live.

Fifteen years ago, during one of their visits to the valley, they joined a bike tour lead by the owner of Napa Valley Bike Tours.

Not two hours before that, the couple had talked seriously about moving to Napa. During the bike ride, Brad commented that a guy could do a lot worse in life than leading bike tours in the Napa Valley.

The owner of the company agreed, but said he was tired. He’d purchased the business from the original owner four years prior, and was working seven days a week.

He had fewer than 100 bicycles for rent at that point, and wanted to make a change. The day before Tracy and Brad toured, he had listed his business for sale. So when Brad made his comment, the owner told him about his plans to sell. Brad looked at Tracy; Tracy looked at Brad, and that was that.

Today, Napa Valley Bike Tours maintains a fleet of more than 500 Specialized and Pedego bicycles, some of the top names in the bicycling industry. They operate two locations in Napa Valley – Yountville and downtown Napa.

NV Bike Tours buys new bikes and sells their inventory of used bikes every year, almost all to locals who recognize the value of a lightly used, well maintained Specialized and Pedego bicycle.

When the owner of the local retail Specialized bike shop retired, it presented Brad with another opportunity. “We already knew Specialized bikes inside and out from our tour and rental business. So it was only logical for us to open a ‘real’ bicycle shop to keep the Specialized bicycle line in Napa.”

Napa Valley Bike Shop celebrated their first year in business as a “real” bicycle shop on June 1. They are located at 950 Pearl St., kitty-corner from the parking lot that was once home to the Cinedome theater.

They still sell used bikes year around, but offer the latest from Specialized, Haro, Public Bikes and Pedego Electric Bikes as well. All of their bike lines are California-based companies.

“If I don’t have the exact bike our customer wants, special orders typically arrive in three business days or less.”

Locating in downtown was a natural.

“Napa Valley Bike Tours started in Napa, but casual riders complained of busy streets, so we were forced to move Upvalley in 2005.”

But all that changed with the opening of The Vine Trail – a walking and bicycling path. Riders can now go from south of Kennedy Park to Yountville, free of vehicles.

“It’s made all the difference in the world which made sense for us to reopen our Napa store,” said Brad.

At NV Bike Shop, you can not only buy a new or used bike, but also a place to get a tune up or repair for your existing bike.

“We’ve been buying, selling, and repairing our tour and rental fleet for the last 15 years. Now with four mechanics, we have the resources to offer our bike repair expertise to locals.”

What sealed the deal for Brad to open the bike shop came when he was awarded exclusivity as a Pedego Electric Bike dealer.

“Pedego is an 11-year old electric bike company – in electric bike years, that’s like 100! They are the biggest and best brand of electric bikes in America with over 140 retail stores. Jump online and look at their reviews – people love these bikes – it answers why they have stayed in business this long when many e-bike companies have come and gone. Their longevity and customer service mission to ‘delight the customer’ is why I wanted to be affiliated with them.”

“The electric bike revolution has absolutely exploded in the last few years,” said Brad. Years ago, serious cyclists looked askance at electric bikes as somehow being “cheaters,” but that is no longer the case.

“Commuters love them. They don’t use gas, you don’t arrive at work all sweaty, you don’t have to worry about parking, and time isn’t an issue.”

Brad uses his Stretch cargo electric bike to commute from his south Napa home. “I timed it, and it only takes me one minute more to get to my desk than if I drive, partially because I can ride right up to the front door.”

Even casual, recreational riders are embracing electric. “I call electric bikes ‘option bikes’ – you decide how much exercise you want, not the terrain or weather. Many people still want the enjoyment of bicycling without the work. And the head wind we get here every day? Not an issue!”

Pedego carries a full line of bikes, including tricycles, tandems, cargo, even fold-up bikes, and in many “fun” colors.

“We offer electric beach cruisers and city commuters for rent; the visitors love them. Our rental fleet is also a great way for locals to try out an e-bike before buying. They are so fun, they sell themselves.”

“I call our Specialized e-bikes the ‘cyclist’s e-bike’ and Pedego’s e-bikes the ‘Fun e-bike’. We’ve got two of the top names in electric bike cycling under our roof. Why would you go anywhere else?” asked Brad with a smile.

Tom Finch, owner of Filippi’s Pizza Grotto at 645 First St., started working for the family business when he was only 9 years old.

Want to hear the truth? Just ask a child.

Many people don’t “choose” a career path, it just sort of happens. Work long enough in a job or profession, and there’s your path.

Brad Dropping is owner of Napa Valley Bike Shop. The business is located at Pearl and West Streets, kitty-corner from the parking lot that was once home to the Cinedome theater.