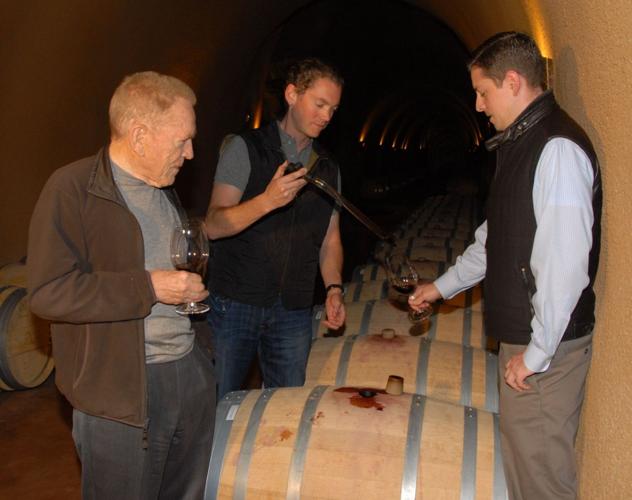 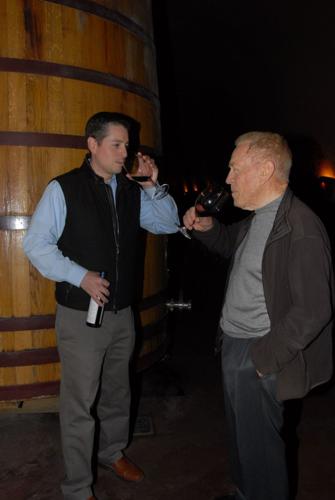 William Jarvis and his son Will stand in front of one of the wine casks located in the underground caves that house the Jarvis winery operations. 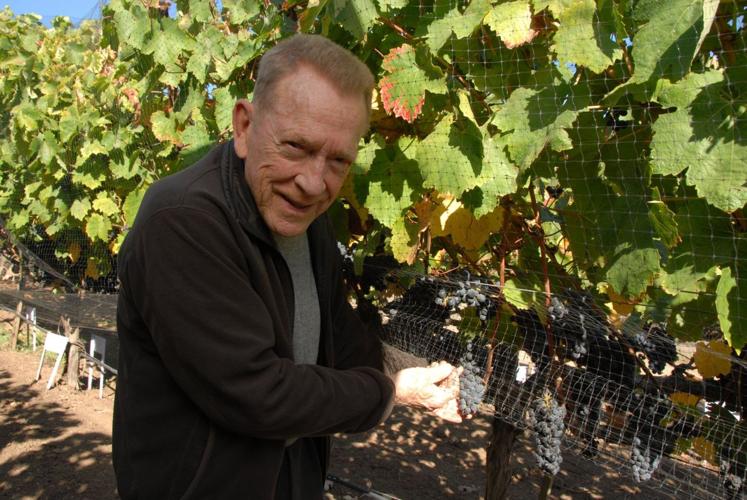 William Jarvis, founder of Jarvis Estate, holds a cluster of charbono that is growing in their experimental vineyard.

A group touring the Jarvis winery stops to taste wine in one of the many elegant rooms found underground. Tours are $80 per person. Visit jarviswines.com for details.

Will Jarvis is finding out what it means to be a second-generation vintner in the Napa Valley.

Will is son to William and Leticia, founders of the Jarvis Estate winery and vineyard located in the eastern hills above Napa. The estate is about a 15-minute drive from downtown and has stunning views of the valley and beyond.

“I’ve always known I would eventually come back,” said 32-year-old Will during a winery tour. “After graduating with my MBA from Stanford in 2011, I spent a couple of years in banking, gaining outside experience. But my parents and I always knew that I’d help my family manage the winery someday.”

The Jarvis estate is composed of more than 1,300 total acres, 37.5 of which are planted in vines. A large understated door at the entrance to a cave opens to a 45,000-square-foot system of tunnels that house all the winery operations and are powered by solar energy. The vast underground caves are lined with barrels. Sconced lighting provides an elegant glow to the cave walls, and the sound of rushing water grows louder as one twists deeper down under the earth.

Will and his father lead the tour, each talking in turn, highlighting that their wines are all estate-grown and emphasizing that all the winemaking occurs underground in temperature-controlled conditions. Up ahead, a spectacular underground waterfall comes into view.

Will grew up in Napa, and by the time he finished middle school he had made his own first wine.

“After going to elementary school in Napa, I transferred to Harker private school down in San Jose,” he said. “I spent my weekdays there and weekends back home. When I was about 13 I got the idea to ask the headmaster if I could make wine for my science project that year. I was a little surprised when he agreed. I picked the grapes myself and made the wine in my dorm room. A few months later I had created my first vintage. My parents and I opened a bottle of it years later and we were all pleasantly surprised by the fruity flavors.”

William’s path to wine and the Napa Valley was not as clear cut as his son’s. He was born in 1925 in Sayre, Okla. His first stint in college was at the University of Oklahoma, after which he went on to Annapolis to become an officer in the U.S. Navy, spending time in China just after the end of World War II.

Back in the United States after his tours of duty, he furthered his education at both UC Berkeley and Stanford. After obtaining his MBA at Stanford, he did what many other successful men of the 1950s did — he went to work for Hewlett-Packard and then left to start his own company.

“After HP, I spent a year back at Stanford taking graduate-level electronics courses to learn the latest technology,” he said, “And then in 1960, two other engineers and I started Wiltron, an electronics company.”

Looking for a place to settle

By the early 1980s, his company Wiltron had grown into a multimillion-dollar business, and he and his wife Leticia were spending some of their time traveling and exploring the world.

“We had spent time in France studying French literature at three different universities in three different French regions,” he said. “Each region had its own winemaking style, and we got interested in wine.”

By the mid ’80s, Will had been born, and William and Leticia were looking for a place to settle.

“We had some friends who had a place in Napa,” William said, “but we couldn’t decide between moving to France or staying here.

But his wife’s background helped tip the scales. “My wife grew up on a hacienda in Mexico, and the hills above Napa must have reminded her of home,” he said. “That was enough.”

Beyond the ties to Leticia’s memories of growing up, Napa provided an environment that supported experimentation.

“The great soils here were reminiscent of our French experience,” William said. “But my engineering background led me to wonder at the time if all their winemaking traditions were really founded in good science. For example, the French said that older vineyards were better. Dr. Smart, our viticulture consultant, said the reason old vineyards were better is that the vines had fewer leaves, which permitted more sunlight on the grapes. He proved that we could achieve the same result on new vineyards by just picking the leaves that shaded the grape clusters. Many vineyards in Napa are doing that now.”

The tour pauses at an underground room set with an elegant table covered in wine glasses and plates of cheese and bread.

Seven wines are poured, including the 2006 cabernet sauvignon reserve ($230). Although known for their elegant cabernets and chardonnay, on that day, two of the standouts included the 2012 merlot ($52) and the 2012 tempranillo ($88). They produced 1,477 cases of the merlot, which had velvety tannins and rich dark-fruit flavors, finishing with chocolate and a hint of raspberry.

Although the 2012 tempranillo is nearly sold out, only now available in half bottles, this wine is stunning with rich, round tannins and deep plum flavors that blend seamlessly with leather and cigar tobacco. The wine lingered on the palate, leaving a lasting impression of cherry cola and clove.

Will the winemaking approach change over time? Will is quick to respond.

“I’m a strong believer in the winemaking process that has been established by my dad, consulting winemaker Dimitri Tchelistcheff and our winemaker Ted Henry,” he said.

So what are some of the challenges faced by second-generation Napa Valley vintners like him?

He said he looks to other Napa Valley families for inspiration.

“I think Peter Mondavi Jr. is a good example,” he said. “Peter is a fellow Stanford alum and an active contributor to the business school. I saw him speak once or twice at Stanford, and it seemed like there was successful continuity between Peter Mondavi Sr. and the next generation.”

Will sees technology as one way to make his mark.

“I see an opportunity to take advantage of recent agricultural technologies to optimize the consistency of our production,” he said. “This is an increasingly important challenge in the context of climate change, which can result in increased variability from year to year. An example of using new technologies is our recent collaboration with Fruition Sciences, which has already proved to be useful during the 2015 growing season, allowing us to optimize our water use.”

“My parents have given me a deep appreciation for the performing arts,” said Will. “They have steadfastly supported the local community through their creation of the Jarvis Music Conservatory in Napa, which I also strongly support. I think the conservatory is relatively unknown, in spite of its quality programs, and I see an opportunity to increase its activity and visibility.”

When William was asked what he’d like to be remembered for in 50 years, he looked at his son, a small smile on his face.

“I hope the winery is still making high-quality wine,” he said and paused for a moment. “Wine caves can last for a very, very long time. Besides, our name is on the bottle.”

Tim Carl is a Calistoga resident and freelance writer.

Monkeypox: What we know about the virus as the WHO considers if the outbreak is an 'emergency'

Monkeypox: What we know about the virus as the WHO considers if the outbreak is an 'emergency'

When you should use credit over cash

When you should use credit over cash

William Jarvis and his son Will stand in front of one of the wine casks located in the underground caves that house the Jarvis winery operations.

William Jarvis, founder of Jarvis Estate, holds a cluster of charbono that is growing in their experimental vineyard.

A group touring the Jarvis winery stops to taste wine in one of the many elegant rooms found underground. Tours are $80 per person. Visit jarviswines.com for details.