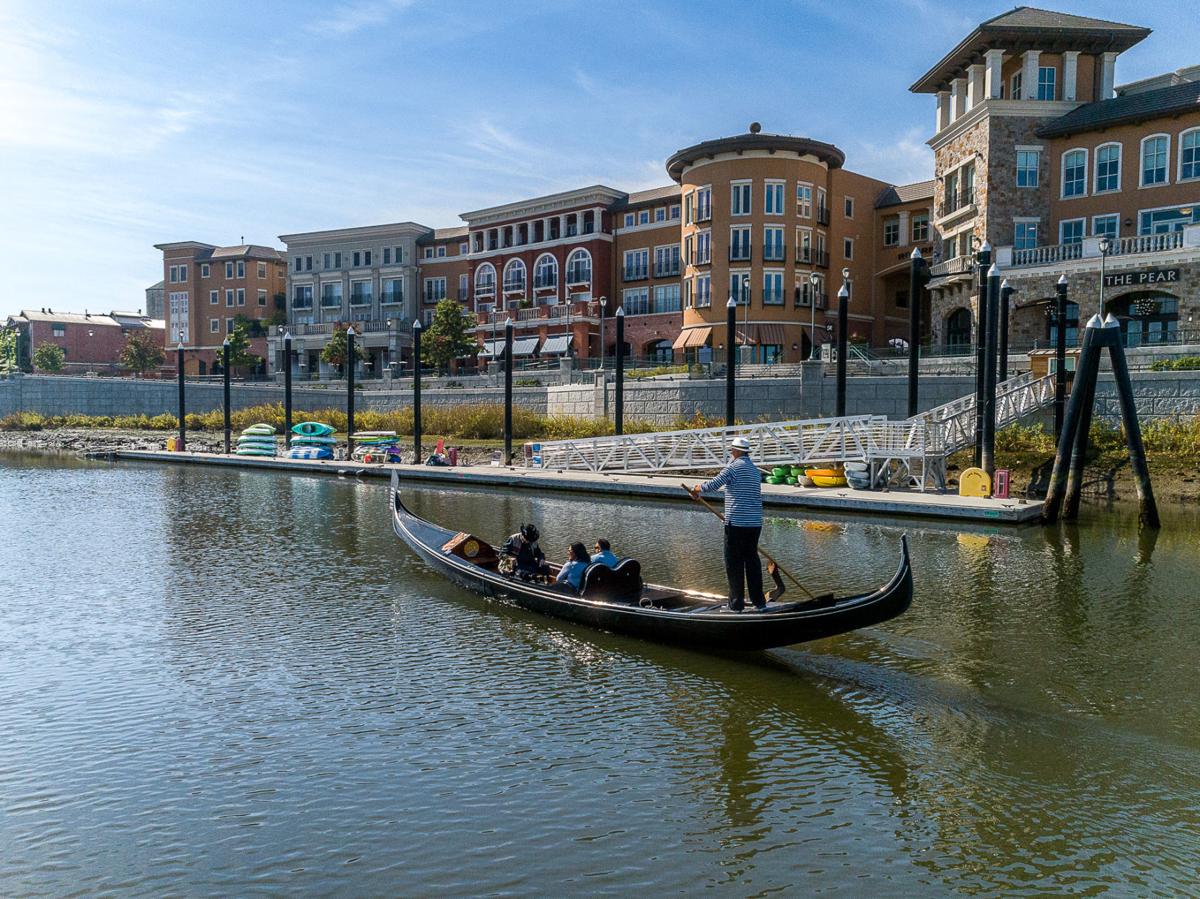 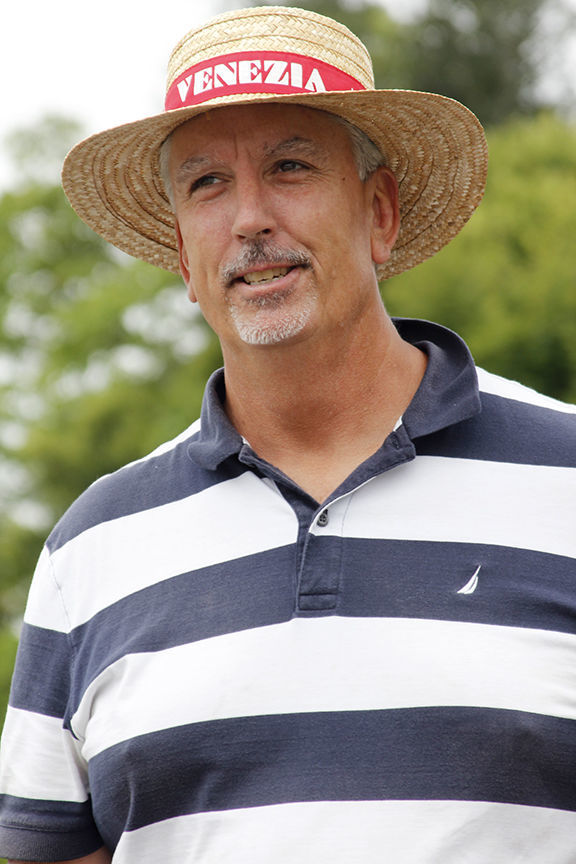 Sean O’Malley is the owner of Napa Valley Gondola. 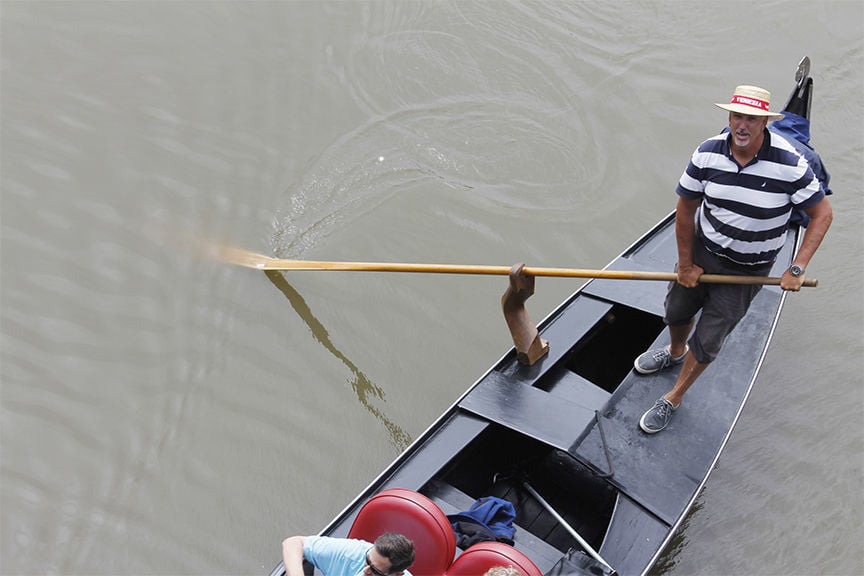 Sean O’Malley, owner of Napa Valley Gondola, and his customers. 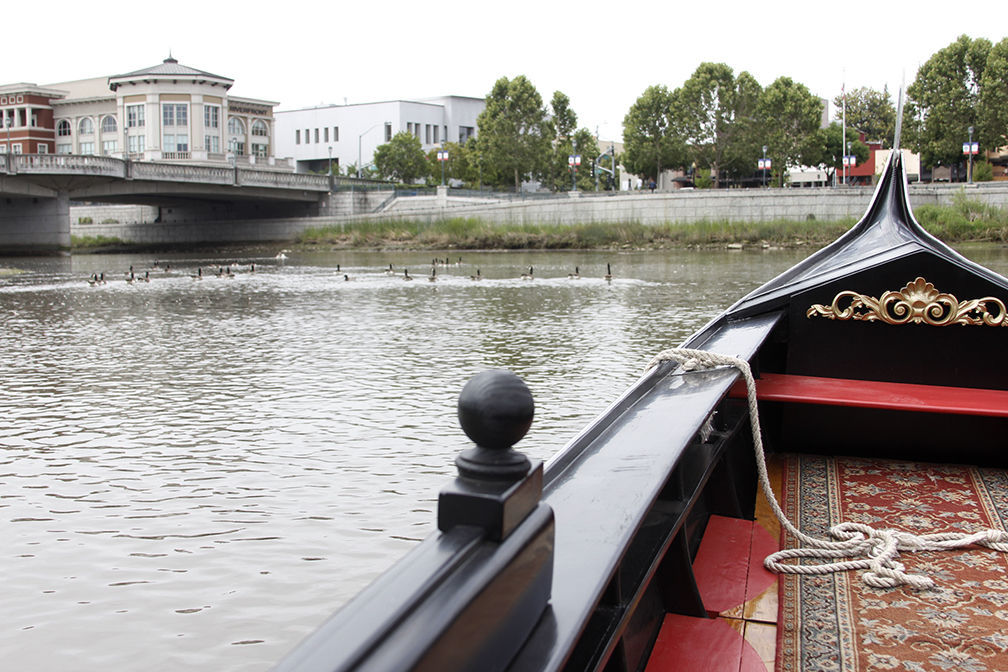 A view from a Napa Valley gondola.

On nice days in the Napa Valley, there’s a man on the Napa River wearing a striped polo shirt, singing songs in Italian and rowing a gondolier. His name is Sean O’Malley, he’s never been to Venice, has never sang in front of a large audience and doesn’t know how to speak the language he’s singing in.

And, as of last month, he’s the owner of Napa Valley Gondola.

“I have never been on a gondola before this,” O’Malley said.

It all started about a year ago when O’Malley, a longtime stay-at-home dad and former technology guy, was perusing Craigslist and saw an ad for “gondolier try-outs.”

Gondola Servizio, an Oakland company that was running rides at Lake Merritt, was hiring someone to revive their Napa service, which ended in 2006 when the city was making flood-control improvements.

O’Malley, a former collegiate rower, longtime surfer and all-around athlete, thought he would be a natural. It didn’t hurt that he was really familiar with the Napa River, often taking friends out on tours just for fun. From time to time, he said, he’s seen beavers, river otters, dolphins, seals and, once, what he thinks was a large turtle.

“A lot of locals don’t even realize there is a river in the middle of Napa,” O’Malley said. Usually, he added, “The beauty of that river is only accessible to kayakers, boaters and people who live on the river.”

His favorite part about taking people out on his own boat was seeing their reactions to the river that first time.

“I thought it was going to be super easy for me — it was not,” O’Malley said. “There’s so many tricks to feathering the ore — the skillset it took.”

O’Malley describes it as a mixture of sailing, skateboarding, paddle boarding and rowing.

He fell in love with it, and the owners at the time, April Quinn and Angelino Sandri, hired him, describing him previously to the Register as “enthusiastic.”

“It’s almost as if you’re doing a show,” O’Malley said. The self-described “extrovert” practiced singing outside of the shower, learned the history of gondolas and, perhaps because he is a dad, seems to be a natural at entertainingly corny jokes.

“I love getting on my bike, getting down to the dock, getting to be social and active,” he said. So, when the previous owners approached him about taking over, he was on board. The deal was finalized in May.

“This is my main thing — this is my little business,” O’Malley declared proudly in a recent interview. He has already changed the name, built a new website and is planning to offer packages with some of downtown Napa’s tasting rooms.

O’Malley said he wants to “marry” the city’s food and wine culture with the gondola.

Many of the gondola’s passengers have been drawn to it for its nostalgia while others come for its novelty.

“In my first two weeks, I had four (marriage) proposals,” he said. “It’s a very romantic thing.”

One particularly memorable passenger was an older woman originally from Italy who had ridden on the gondolas of Venice as a young girl, O’Malley said. She even cried.

“You get both worlds,” he said. “People who have never seen one or heard of one who are now gondola lovers and you have people who are already gondola lovers who travel from place to place doing different gondola tours.” You might not expect it, he said, but there are gondola “fanatics.”

He happens to be one now as well, noticing every gondola he sees in films, pausing to get a closer look at how it’s being operated. He said he may even go to Venice in order to “see behind the curtain.”

O’Malley said he hopes to engage locals by offering different types of tours at different prices — ranging between $95 and $160, by offering last-minute deals via social media and by having a presence at community events.

O’Malley said he thinks and hopes that his “little business” will be a success, but said that, at the very least, “It will be a love affair.”

Sean O’Malley is the owner of Napa Valley Gondola.

Sean O’Malley, owner of Napa Valley Gondola, and his customers.

A view from a Napa Valley gondola.