In this series, NerdWallet interviews people about their journey to tame debt. Responses have been edited for length and clarity. 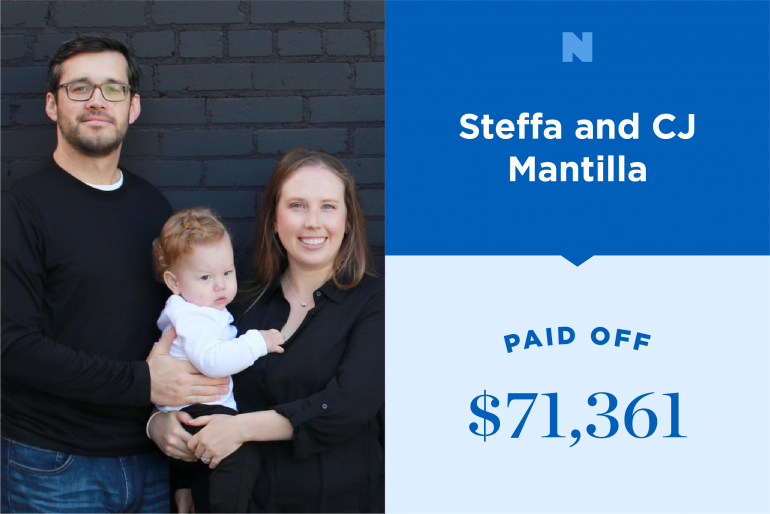 As a former zookeeper, Steffa Mantilla promises she didn't use any animal training techniques to get her husband on board with a debt reduction plan.

However she might have persuaded him, the Houston couple paid off more than $70,000 in debt in five years. Mantilla, now a digital content marketer, and husband, CJ, a medical device sales rep, have a 3-year-old son. Planning for a baby served as a catalyst for their money makeover.

The financial turnaround started in 2016.

'We need to get our act together'

"We had just bought our house ... and that was the time that we were starting to kind of think of having a baby. We had been married for 10 years, and that seemed like a milestone. And we were like, 'OK, we've been living it up. We need to get our act together.’"

At the time, she was a zookeeper, and her goal had been to work with cheetahs.

"Zookeepers are not paid a lot, quite honestly," Steffa says with a laugh. At the time, she made $33,000 a year and CJ's salary was $75,000 annually, both pretax. And even though she'd fulfilled her goal of working with cheetahs, she feared the job's long hours and nighttime special events would mean too much time away from home after a baby came.

When considering the cost of day care, the Mantillas determined that if Steffa could find a work-from-home gig, there would be only a $500 financial gap to be filled each month — if they could eliminate some consumer and student loan debt payments.

That's when Steffa and CJ realized they were "overspending drastically."

"We were spending like $800 a month on entertainment and restaurants," Steffa says. Tracking their actual monthly expenses was a revelation. "If we were to guesstimate, we'd probably have thought, 'Oh, maybe $300 to $400 that we spend on eating out.' No, it was double that. And why?"

It took some convincing to get CJ on board to change their spending habits. CJ wasn't opposed to being more frugal; he just wasn't ready to make it a priority. That's when Steffa used some positive reinforcement.

"Like in the car together when we were going places, I'd say, 'Hey, I'm listening to this podcast, do you mind if we listen to it?’ Of course, it was often about people paying off debt and exclaiming, 'We're debt-free!'"

Steffa says that many of these success stories were from people who owed more money than they did — and had lower incomes. "And it was like, 'Wait a minute, how is it that everyone is seemingly able to get this figured out, except us?'

"I think just hearing that over and over was more of an inspiration," Steffa says.

But when CJ was in, he was all in. It turns out CJ is a "spreadsheet nerd," Steffa says.

They share access to a budget on Google sheets. CJ transfers transactions into the spreadsheet, and she can check what’s available in a category before spending. They've also used a budgeting app to help limit spending and get alerts when they're over budget.

In the beginning, before the baby, Steffa took on overtime hours to make extra cash and reduce the urge to "go out all the time." And any bonuses that CJ earned at his job were also funneled to debt.

Later, when working from home, she earned extra money by being a pet sitter — with a particular emphasis on cats, of course. Imagine the referrals you get when people find out you're a former cheetah trainer turned cat sitter.

Leveraging their options gave them a boost

The Mantillas’ focus on budgeting helped them get their spending and credit cards under control. Then they turned to some big debt goals.

The couple had saved for a down payment on a house. Because CJ had served in the Navy, they were able to qualify for a VA loan, which typically doesn't require a down payment. They redirected down payment savings to wipe out $11,361 in student loans.

The Mantillas began paying down their mortgage using cash leftover from their new budgeting process as well as from eliminating payments to debt. So far, they've reduced their mortgage balance by $60,000.

These days, with only the remaining mortgage debt to contend with, the couple isn't "going at it as hard," Steffa says. "Taming" money has its rewards. (Steffa's blog telling her story is at moneytamer.com.)

"The biggest difference is we just have a lot less stress. I think that now that we have clear goals and no consumer debt and just the mortgage that we're really chugging away at, the stress factor is gone."

Photo courtesy of the Mantilla family

The article How I Ditched Debt: Getting On Board With a Budget for Baby originally appeared on NerdWallet.

Why inflation may not go away anytime soon

America's finance chiefs don't think inflation will go away overnight. Here's why. Plus, check out more of the week's best money tips from financial experts.