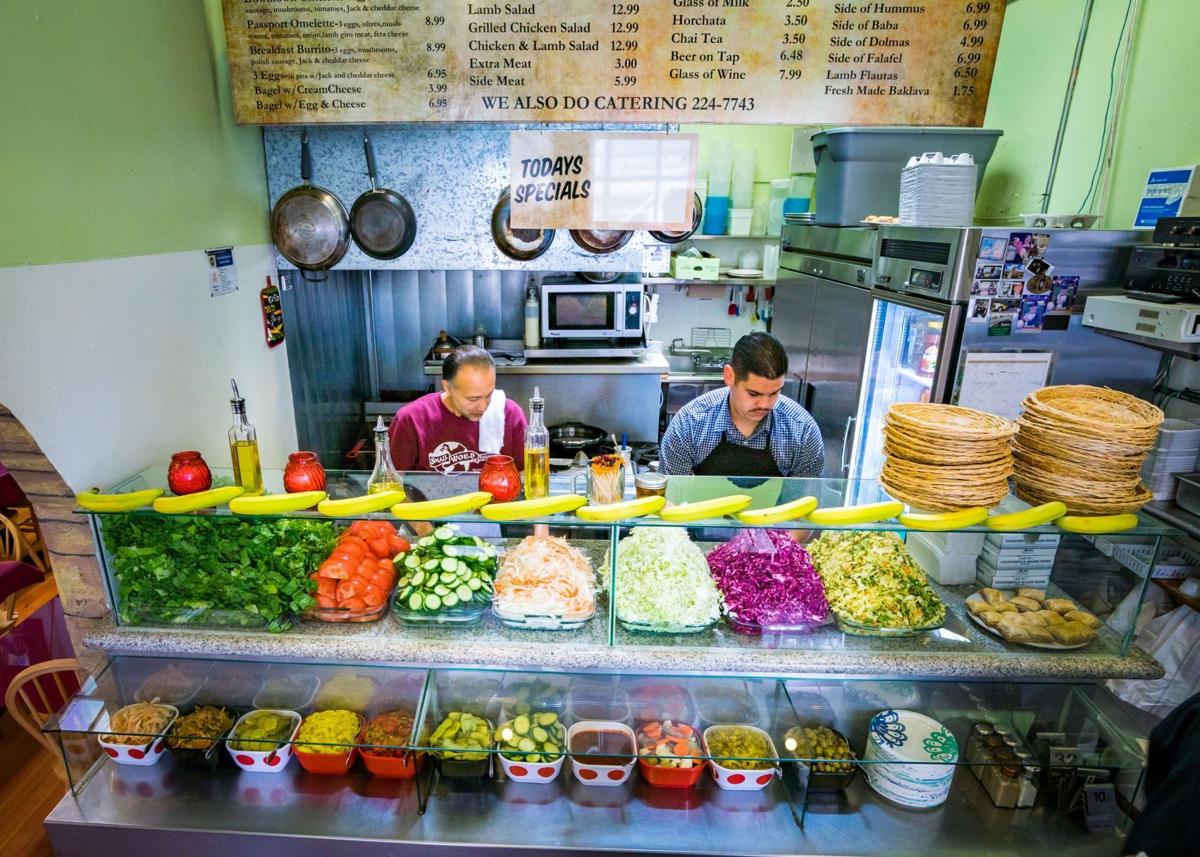 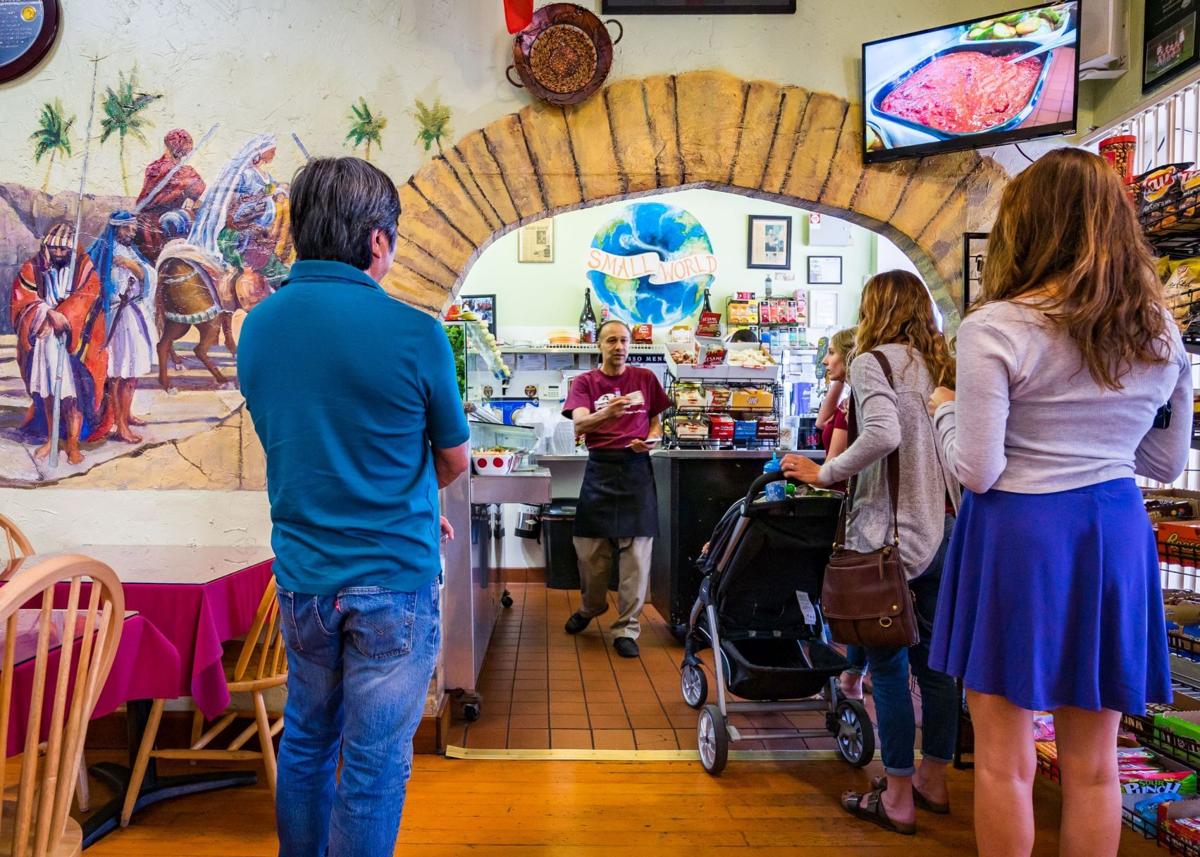 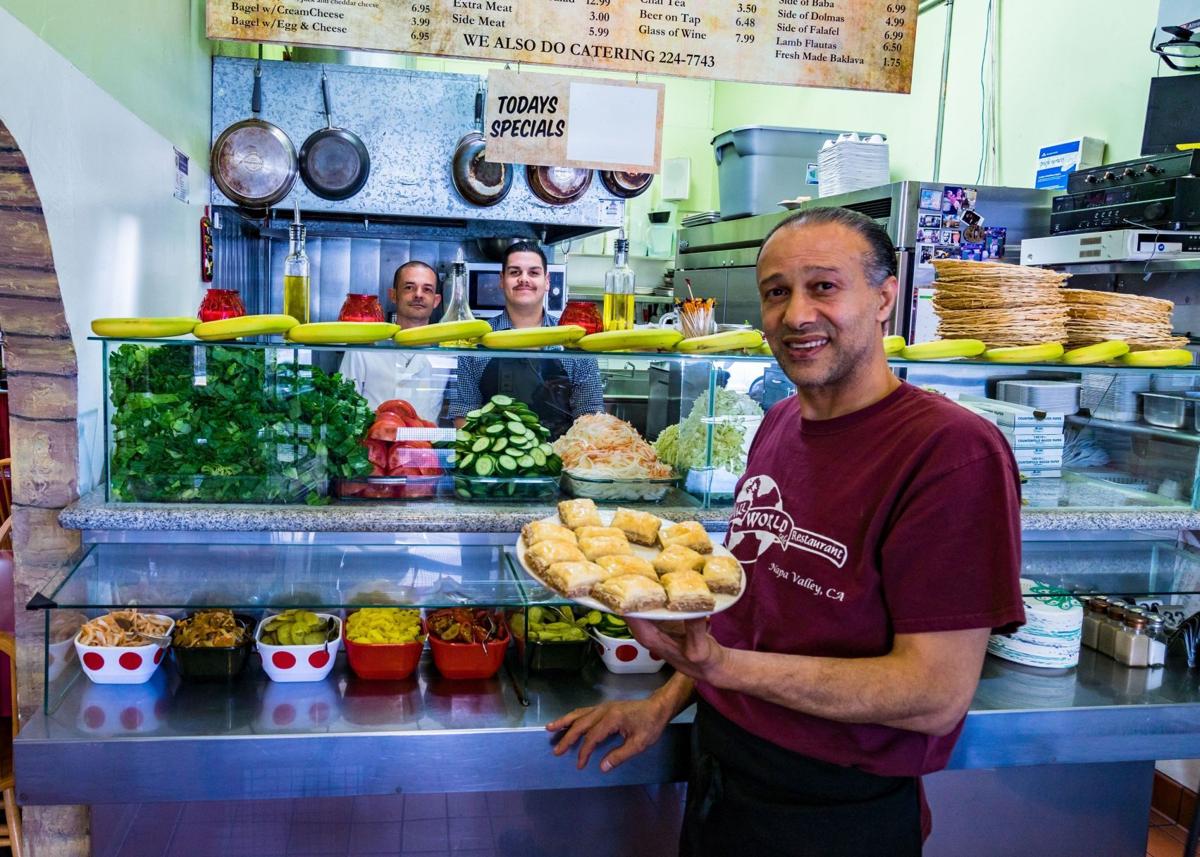 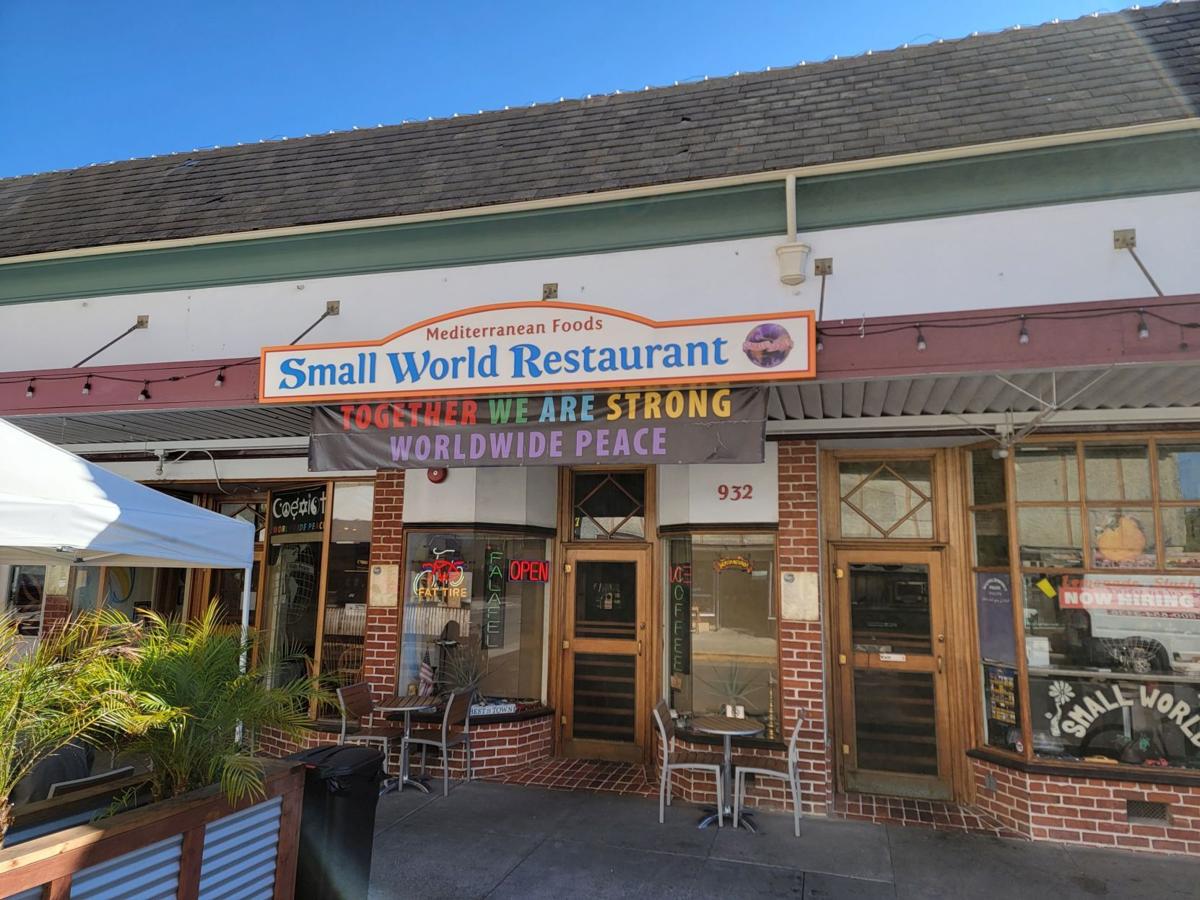 Small World Restaurant has been serving Mediterranean food at 932 Coombs, between First and Second Streets, since 1995. Three of the most popular items on the menu are the falafels, hummus and shawarma, but count on seeing happy patrons eating burgers and fries as well.

The website describes the menu as “Food from Nazareth and around the World.” Owner Mike Ali Musa says the emphasis is “between Middle Eastern and Islamic (Jewish) food. I named it ‘Small World’ because we live in small world, and everybody should come together.”

Every year, Mike changes one or two things on the menu, just to keep it interesting for regulars. “This year, we added a fish burger. It’s fried cod tail on a brioche bun with all the fixings, plus green cabbage, parsley and one of three cheeses. People like it a lot.”

For that matter, people like Small World a lot. You’d be hard-pressed to find a time of day when they aren’t filled with customers.

Mike was born in Nazareth, Israel. His father is, in his words, “one of the best chefs, period.” Dad owned a restaurant, and even as a child; Mike wanted to do the same thing. The Ali Musa family moved to LA in 1980, and vacationed in Napa.

“My father and uncles had train sets, and we would stop at the Loose Caboose every year so they could buy something new. Who knew I’d own a restaurant just blocks away.” Much of his family relocated to Napa in 1988. One of Mike’s uncles owned Valley Liquor Market, where Mike worked until he opened the restaurant.

The first year was a challenge for Small World. Downtown Napa had a lot of vacancies, and getting known took a while.

“Napa was dead. We used to close at 3 p.m. The only people on the streets were skaters.

“He took me to his warehouse, loaded two coolers in a truck, and brought them to me, free of charge. When we were having trouble making rent the first year, he told me not to pay rent for four months. He was one of the most humble, sweet guys I’ve known.”

When Danelen was dying, he demanded that Mike find and hand him their lease agreement. His landlord took out a pen, and across the bottom of the document wrote, “Should the building ever be for sale, Mike has the right of first refusal to buy it.” Mike took advantage of the generous move, and has owned the building for 15 years.

More importantly, Mike remembers the kindness his landlord showed him, and has passed it on since opening the restaurant. Two of his employees were homeless when he hired them. One had just gotten out of prison. Mike witnessed, right across the street from the restaurant, a woman get hit by a man who turned out to be her husband. Mike asked her why she stayed with him, and she said that she had no money or job. Without hesitating, he said, “You want to work? Be here tomorrow.”

Mike takes good care of his employees, and is thankful for everyone who works with him. Out of a staff of nine, most have been with him over ten years. During COVID, no one left.

Getting Mike to talk about his staff in this way took a little prodding. “I’m not trying to sound like anything special,” he said. “Life is short. We’re all one, and we need to look out for each other.” He believes that everybody deserves a second chance, or even a third.

He is also a dedicated family man. It’s not unusual to find uncles and cousins at the restaurant. He and wife Jennifer have four children, and Mike says they practically grew up at Small World. They all go to Israel every year to visit with relatives.

“My kids have never had a vacation here, but they love their aunts and uncles and cousins. Besides, Nazareth and the beaches are beautiful.”

Mike has ready advice for anyone wishing to get into the restaurant business. “If you can take the heat, get in the kitchen. It’s not as easy as it looks, though.”

Small World has international regulars, as well as lots of locals who frequent the place. The restaurant is open six days a week. With a twinkle in his eye, Mike explains that, “God wants Sundays off, and so do I.”

Craig Smith is executive director of the Downtown Napa Association.