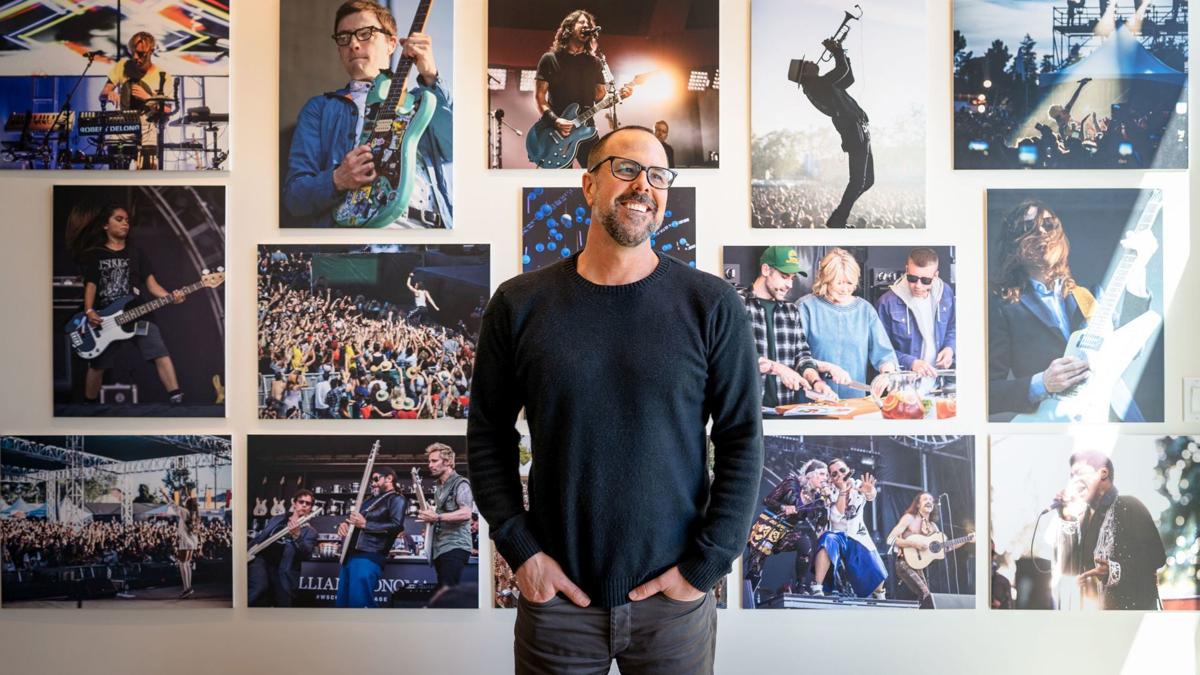 Napa native Dave Graham is the CEO of Latitude 38 Entertainment, the company that runs the Napa Valley music festival BottleRock. 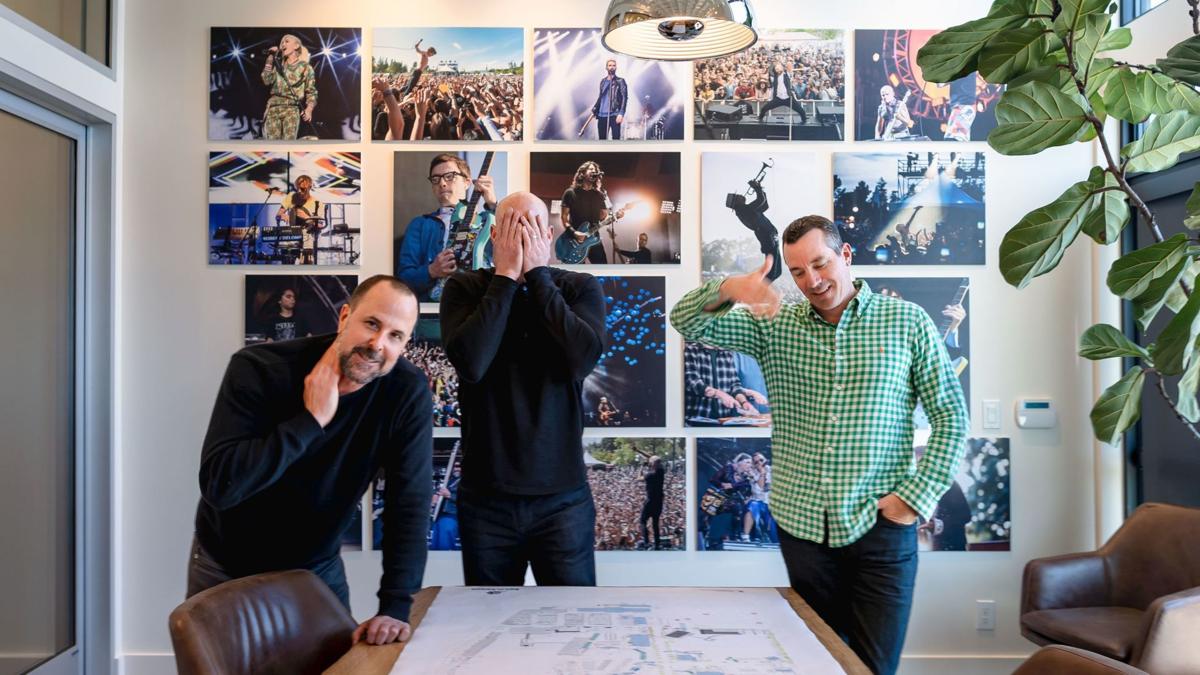 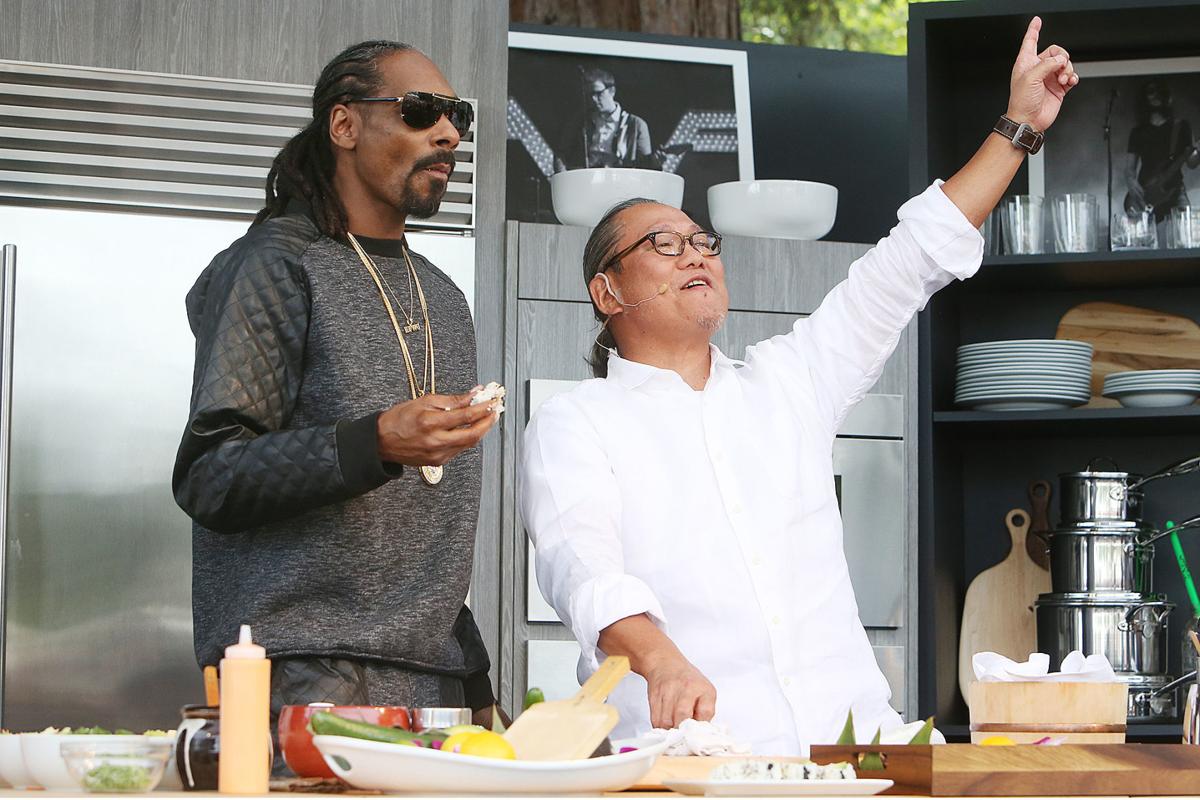 Snoop Dogg tries the California roll he made with help from chef Masaharu Morimoto during the last day of BottleRock 2015 at the Napa Valley Expo.

The inaugural 2013 BottleRock left a wake of unpaid debts, community complaints and accusations of general mismanagement that put the future of Napa Valley’s first major music festival in doubt.

But what others saw as the likely end of a short experiment, three friends — Napa natives Dave Graham, Justin Dragoo and Jason Scoggins, all of whom had had successful previous business careers — saw an untapped opportunity.

“That first year we all just attended the event as music fans and we were like, ‘I can’t believe this is going on in our own hometown’ — it was awesome,” Graham said.

“When we heard that the festival’s future was in jeopardy we were all disappointed, but then we started to think about the possibilities, which we felt were significant.”

To most everyone else, the potential possibilities seemed murky at best. The festival had lingering debts of over $2.5 million, workers had gone unpaid, checks had bounced and the city of Napa was getting an earful from the community about snarled traffic and unruly festival goers, while some local businesses claimed that — despite the estimated 80,000 attendees that year — the number of shoppers had actually decreased during the three-day event.

Convinced that the music festival could work if it were overhauled, the trio of high-tech entrepreneurs with no music industry experience formed Latitude 38 Entertainment.

Named for Napa’s geographic location along the 38th parallel north, the team of Napa Valley natives could have just created a whole new music festival, dropping the BottleRock name altogether and starting fresh.

Instead, in a show of good faith, they purchased the assets of BottleRock without assuming any liabilities and eliminated half of the debt. The partnership believed that through their business experience, coupled with their deep local roots, they would turn the ailing festival around in short order.

“We liked the look and feel of the BottleRock brand and also didn’t want to sully the name of the Napa Valley with a failed music festival,” Graham said. “Besides, the problems with that first festival had not affected the good will of the attendees, like me, who loved having a first-rate music festival in their own backyard.”

Although many of the 2013 attendees remained unaware of the business challenges and were looking forward to the 2014 festival, Graham and his partners found it tough convincing those in the music industry that they were a whole new ownership group.

“It was brutal trying to get the 2014 lineup,” Graham said. “We’d go into industry meetings and they’d say, ‘Hey, you pay your bills yet?’ We’d tell them we were new owners, but we often needed to pay up front to get over the hurdle that first year.”

However, what the team knew — all with MBAs — was that the Napa Valley ethos fit well with their idea of creating a customized luxury experience.

“Being in a place like the Napa Valley is unique in the world of music festivals,” said Dragoo, partner and chief operating officer. “Where else can you bring exceptional food and wine, beautiful views and the finest bands together in one place?”

What Dragoo, a former college/pro football linebacker, had learned during his numerous post-football careers — including being a vice president of global technology services for IBM — was how to match luxury experiences to fit customer expectations.

This knowledge — along with his having grown up in the Napa Valley — convinced him that many of those visiting wine country were looking for an elevated experience.

“We were not from the music industry, and so that was a minus in some cases but also a plus because we could look at things differently,” Dragoo said.

“What I’d learned in the past was how a super-strong team built on trust can have a huge impact on success. Because I knew and trusted these guys and we each had distinct skill sets, I felt like we could make this work.”

The trio was finding that a certain type of attendee desired to have an “elevated experience” but that finding ways to treat the general-admission guest and those in the community better was also of critical importance.

“Because we were coming at this without being in the music industry, I think in many ways that gave us an edge,” Graham said.

“We asked, ‘Why not create a clean, safe, high-quality experience that matched the Napa Valley brand of luxury? Why not create a festival that the community was behind and supported?’ Our goal became that of being true to this place. Our focus was a type of ‘Napatism,’ if you will.”

This focus on the Napa Valley ethos also manifested in community outreach, highlighting local wineries and restaurants, engaging with strong partners and working to maintain a new and fresh lineup every year.

“Our focus is on creating an experience that rises to the level of the Napa Valley brand — doing so gives us meaning and purpose,” Graham said.

“We now have 80 wines by the glass, dozens of restaurants included that range from Gott’s Roadside to Oenotri to Thomas Keller’s restaurants, and our guests who’ve never been here before get a better sense of what this valley has to offer.”

“Everyone has this idea that comes to mind when they think about Napa, and it typically involves food and wine,” he said. “When we took over the festival, we felt like if you already have 3.5 million people coming to Napa every single year, then give them what they want and add music, not create some copycat festival that didn’t fit this place.”

According to Graham, many of the more than 70,000 visitors who attended BottleRock last year had never experienced wine country.

“It’s pretty awesome when you go to a winery that weekend and see someone with a BottleRock T-shirt on,” Graham said. “I think sometimes we take it for granted just how beautiful and good we have it here. It’s fun to share that experience.”

To engage with the community and address concerns the team conducts public meetings.

“We live here and so it really matters what our neighbors think,” said Scoggins, who is in charge of sponsor relations.

“Our intent is that the entire valley benefits from BottleRock and that we continually improve the experience from no-wait lines, litter cleanup and better parking to shutting off the music exactly at 10 p.m. We want to be good neighbors.”

What the team has learned over the years is that there are vastly different levels of desired service for festival goers. All attendees want to see their favorite bands.

And although BottleRock has not hosted the likes of the Rolling Stones, it has attracted top acts such as this year’s young hip bands: Mumford & Sons, Shannon & the Clams and Imagine Dragons, while also including baby-boomer group such as Neil Young and Santana in the lineup.

This eclectic collection is anything but random and represents a distinct strategy to appeal to the breadth of those interested in attending the three-day concert.

Whereas the general-admission ticket buyer makes up 85 to 90 percent of the concertgoers, there is the remaining segment who desire an “elevated” level of experience, according to Dragoo.

Most who pay the $359 for a three-day general-admission pass are content to watch bands from the ground level, use the flush toilets, purchase wine and food at the numerous “wine cabanas” or watch the various culinary demonstrations where they might catch a glimpse of famous chefs cooking with top musicians — like in 2015 when Snoop Dog learned to roll sushi under the tutelage of “Iron Chef” Masaharu Morimoto.

Plenty of options are available for guests who desire VIP treatment, including the $18,057 per-couple package that includes private transportation, a four nights’ stay at St. Helena’s high-end Meadowood resort, meet-and-greets with the artists, special onstage viewing areas and bling such as drinking wine from Riedel stemware instead of plastic cups. If that price tag is too much to swallow, a half-dozen alternative elevated options range in price from hundreds to thousands of dollars.

Our discussion centered on how and why the trio had spent the last half-dozen years building a festival worthy of the Napa Valley. Only at the end did the topic of music and bands come up.

“We’ve spent years, money and a lot of our time working to get the finest acts for the festival,” Graham said. “But in the end, we can’t be wholly dependent on getting the top music acts every year because that’s impossible. What we can do is make sure that we focus on making the experience something that our guests can’t get anywhere else. Of course, that means getting the best bands, but it also means that the toilets are clean and our local businesses and neighbors are happy, too.”

More than two years after the first BottleRock festival ended, most of the event workers and businesses owed millions in unpaid debts will rec…

While pop stars take the stage at BottleRock later this month, Napa residents and visitors are asked to keep an eye out for closed-off streets…

Early pioneers established some of the finest vineyards in the Napa Valley more than 150 years ago. George Calvert Yount was first credited wi…

Napa native Dave Graham is the CEO of Latitude 38 Entertainment, the company that runs the Napa Valley music festival BottleRock.

Snoop Dogg tries the California roll he made with help from chef Masaharu Morimoto during the last day of BottleRock 2015 at the Napa Valley Expo.