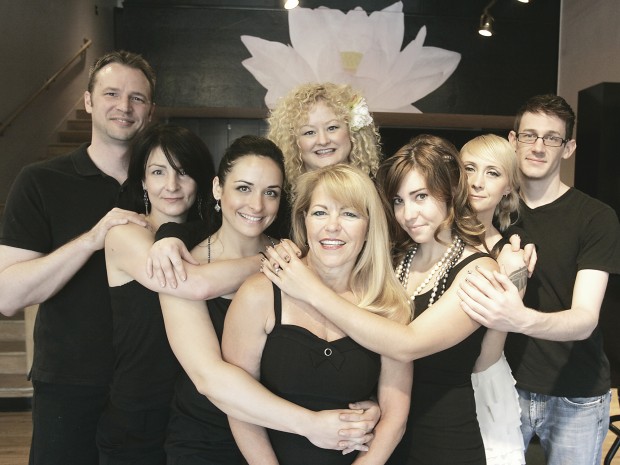 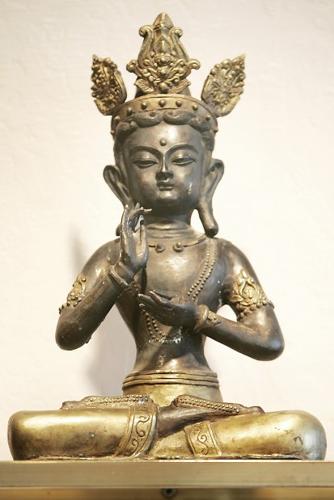 Part Sedona, part Hollywood, Lotus Salon and Spa delivers tranquil relaxation and the skills of a movie star’s glamour squad to Napa Valley. The salon, which opened in May, is owned by Paris Petrick, a former key makeup and hair stylist for the film industry.

After moving to Napa, where she lives with her husband and son, Petrick resumed her work as a hairstylist. While working at Cache Salon, also in downtown Napa, she met Penelope (Penny) Howell, Yasmin Jacka and Veronica Gibson. The four women found that they share philosophies on client experience, world-class credentials and a vision for a salon and spa that would allow them to cultivate all three.

Petrick said that one of the most gratifying parts of the new salon was creating it from scratch with her entire team. Having her co-workers on board before the opening gave them all a chance to renovate the space together, leaving everyone feeling connected to it. As well as the stylists named above, Petrick hired additional hairstylists, aestheticians, massage therapists and makeup artists to enhance the salon and spa’s capabilities.

Lotus offers all types of hair services, as well as a selection of facials, massages, waxing and soon, lash extensions. The hair and makeup stylists have experience in wedding, formal and photo shoot styling. Prices for hair vary depending on stylist and service. Facials and massages begin at $60 for 60 minutes and waxing starts at $20.

“It’s so fun to be around everybody,” Petrick gushed, looking around the salon at the other stylists, busy with their clients. “It has been so rewarding to watch the vision unfold — to step back and realize that it’s happening.”

Petrick said she relates to the lotus flower as a symbol of “coming through the mud and the muck to be beautified.” For her, that includes all beauty. Clients’ visual appearance is not the only thing she wants to enhance when they are in her salon.

“I want people to feel beautiful on the inside,” she explained. “I want them to feel relaxed while they are here and then energized when they leave.”

Petrick said clients can’t achieve all of that if they aren’t comfortable in the salon. One of the largest contributors to a good space, in the eyes of Petrick and her team, is a synergy between the people who work there.

“I think what’s really different about us is that we’re a family,” Petrick said. Her comment had double meaning. She explained that everyone working there is close, but in some way each of them is either related to someone else at the salon, or they go back for so long that it feels like they are. She credits the interwoven nature of the team for the fun atmosphere that fills Lotus.

Although serious styling and beautifying takes place in the salon, the music is on and stylists and clients are talking and laughing. The space is open and airy, with seven hair stations lining either side wall on the lower level of the building.

“I’m a stylist. I want all the room in the world to work,” Petrick said when explaining the unusual spaciousness of the stations.

Large mirrors opposite each stylist’s chair reflect images of blow-dryers, scissors and color foils across the room. Rows of black track lights hanging from the ceiling give the space, which the owner described as “simple, clean, Zen, almost minimalist,” a movie-set feel while keeping the pale pink walls from feeling overwhelmingly feminine.

The upstairs loft has been closed off and divided to create two rooms for massage, facial and waxing services. The buzz of energy below somehow gets lost on its way up the stairs leaving the rooms tranquil and relaxing.

Of Tedianne Latin, the full-time aesthetician, Petrick said, “She is a really great skin-care person. We are lucky to have her.”

Lucky is also how Petrick described the way she feels about the progress of this new venture.

“The best part for me so far has been not only watching the clients’ reactions, but also Penny, Yasmin and Veronica’s. I feel really blessed to be here,” she said.

In looking toward the future, Petrick is waiting to see what happens.

“It’s all just going to slowly unfold — like a lotus!” she laughed.

Musk says he would reverse Twitter's ban of Donald Trump

Tesla CEO Elon Musk said he will reverse Twitter’s ban of former President Donald Trump if his deal to buy the social media company goes through. Musk, speaking virtually at an auto conference, said Twitter’s Trump ban was a “morally bad decision” and “foolish in the extreme.” He said bans of Twitter accounts should be rare and reserved for accounts that are scams or automated bots. Musk earlier gave his support to a new European Union law aimed at protecting social media users from harmful content after he met with the bloc’s single market chief.

Elon Musk said that his planned $44 billion purchase of Twitter is "temporarily on hold" pending details on spam and fake accounts.

Gas prices race back near record highs, but oil tumbles

Prices at the pump are once again flirting with record highs. That's adding to inflationary headaches for families, the US economy and the Whi…

Going to any weddings? Here are tips to keep your costs down! | PennyWise podcast

Listen to the latest PennyWise podcast: Tips to help you save money before you attend a wedding.

US inflation hit 8.3% last month but slows from 40-year high

Inflation slowed in April after seven months of relentless gains, a tentative sign that price increases may be peaking.

US gas prices hit new record high at $4.37 per gallon

The national average price for regular gasoline climbed more than 4 cents today to $4.37 a gallon, a new record high.

10 Questions: Stacey Lopez said she "fell in love" with the insurance industry 14 years ago. Today, she runs her own agency.

3 ways to save after buying a car

Believe it or not, there are ways to improve your car deal even after the ink is dry on the sales contract.

Benchmark Wine Group, a source of "fine and rare wine for wine retailers, restaurants, and collectors worldwide," announced it is expanding into importation and distribution.

Here are some money traps and how to avoid them

Why you should start repaying your loans early

Why you should start repaying your loans early

Gas prices back on the rise in the United States

Gas prices back on the rise in the United States