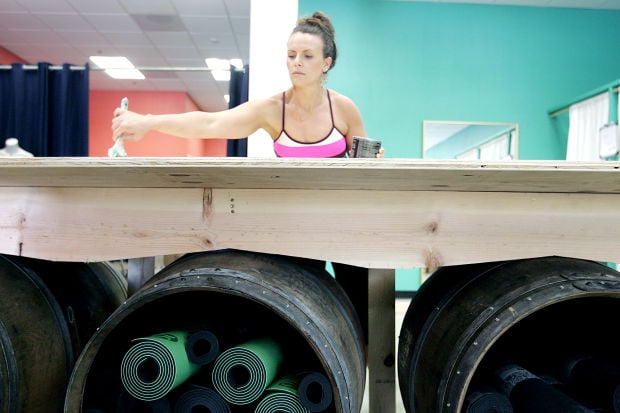 Kali Avila, store manager at the Lululemon athletica summer pop-up store, applies sealant to a table's surface during the store's installation in early May. 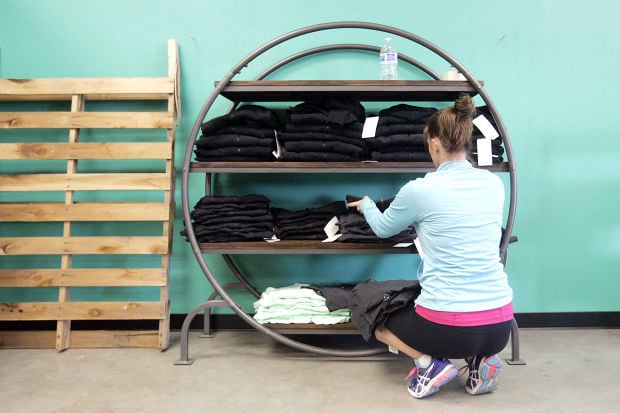 Felicia Coe, an educator at the Lululemon athletica summer pop-up store in Napa Crossing North, builds a display during the store's installation in early May. 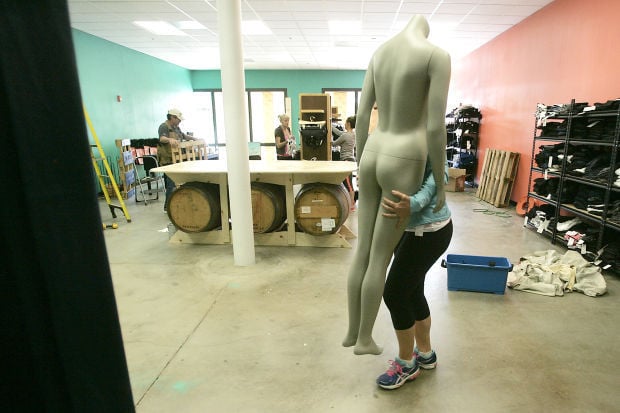 TUESDAY - MAY 06, 2014 - NAPA, CA - Staff at the lululemon athletica summer pop-up store at the Napa Crossing North center, were busy getting the store ready for its scheduled Friday opening. The chain is looking for a permanent location in Napa at a larger space.

Kali Avila, store manager at the Lululemon athletica summer pop-up store, applies sealant to a table's surface during the store's installation in early May.

Felicia Coe, an educator at the Lululemon athletica summer pop-up store in Napa Crossing North, builds a display during the store's installation in early May.

TUESDAY - MAY 06, 2014 - NAPA, CA - Staff at the lululemon athletica summer pop-up store at the Napa Crossing North center, were busy getting the store ready for its scheduled Friday opening. The chain is looking for a permanent location in Napa at a larger space.

The store debuts on Friday and will remain open at the center until Aug. 31, said store manager Kali Avila.

But lululemon’s arrival in Napa won’t be short-lived — the company also plans to eventually find a permanent home in Napa in a larger retail space, said Avila.

“We are excited to announce that lululemon has decided to open a pop-up store in the Napa Crossing shopping center,” said Colby Hallen, a spokesperson for Pacific Properties, the developer of Napa Crossing North.

On Tuesday, the pop-up shop, located between Site for Sore Eyes and Chipotle, was bustling with activity as Avila painted a table top, workers stocked shelves with stacks of yoga pants and other workout gear and another staffer painted a cashier counter. A total of 11 employees will work at the store, said the manager. Befitting the Napa location, wine barrels and wine boxes have been integrated into the store’s décor.

Visiting local gyms, studios, cafes and restaurants, Avila said the staff is using a “grassroots” approach to spread the word about the new Napa location.

“We’re here to bring the community together,” she said. The shop will host different athletic themed events and activities, starting with a grand opening on Friday.

The pop-up shop will sell lululemon favorites such as yoga pants and athletic clothing for running, cycling and other activities, as well as yoga mats, straps, blocks, towels and headbands, said Avila.

Local fitness studio owner Melanie McLaren said that a lululemon store coming to Napa is “a huge deal.” Lululemon has developed “kind of a cult following,” she said.

The clothing, while priced higher than athletic wear bought at a discount retailer such as Target, “is worth every penny because it just holds up so well,” said McLaren, who puts hers to the test, teaching fitness classes two and three times a day.

McLaren likes the product so much she arranged for a lululemon trunk show at an upcoming health and wellness event at her business, Studio Phyzz. The company knows what looks good on women and “how to fit and flatter a woman’s body,” she said.

Unlike other parts of the Bay Area and U.S. where fitness retailers like lululemon, Gap’s Athleta and prAna are common, in Napa County, there aren’t other local stores dedicated to yoga gear. Napa Running Company, Athletic Feat and other retailers offer workout and fitness clothing, but not lululemon wear, McLaren said.

Janet Kuhn, owner of Yoga Passion in Napa, said while she does not own any lululemon products she was curious about the clothing brand and plans to attend a grand opening event on Friday. “I think they will have cool clothes for people wanting to do yoga,” she said.

According to the company website, lululemon was founded in 1998 by Chip Wilson. Lululemon’s first store opened in Vancouver in November 2000. Today, there are more than 200 stores in the U.S, Canada, Australia and New Zealand. For the fiscal year ended Feb. 2 net revenue increased 16 percent to $1.6 billion.

Last year, the chain faced controversy when thousands of pairs of one particular style of yoga pants were recalled over complaints that the pants were too sheer.

In the ensuing aftermath, Wilson later resigned as chairman of the board of the company.

What's wrong with downtown walnut creek? Napa should be the same. WC is a real nice place with great shops and eateries for everyone.

I'm personally very excited about Lululemon coming to Napa! This is exactly the type of store most of us drive all the way to Walnut Creek or Corte Madera for. It will be nice to have one in our own backyard.

The other commenter is correct though, the parking situation at Napa Crossings is a nightmare- particularly during lunch time! Maybe Lululemon will join ranks downtown with the Napa Town Centre once they've renovated.

I think they'll be much more at home downtown once the cloning of downtown Walnut Creek is complete. A real win/win...

The NVR should do this for every new business...what's good for one should be good for all.

Oh good priced athletic gear and is parking lot that possibly worse than the across the street. Not RuRu Lemon has stellar business practices google them for good read.

Who is John Gault? And why is he wearing those transparent pants?http://www.nytimes.com/2011/11/28/business/media/combines-ayn-rand-and-yoga.html?_r=0