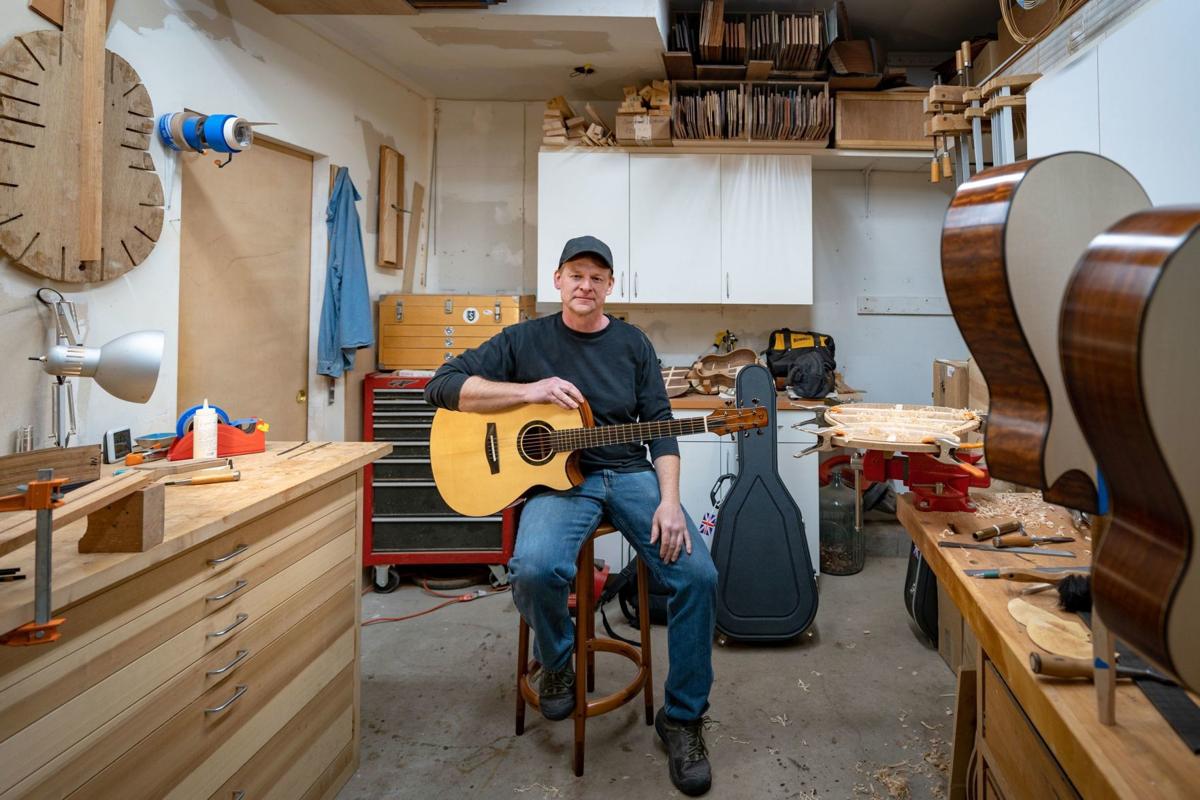 John Datlen in his workshop. 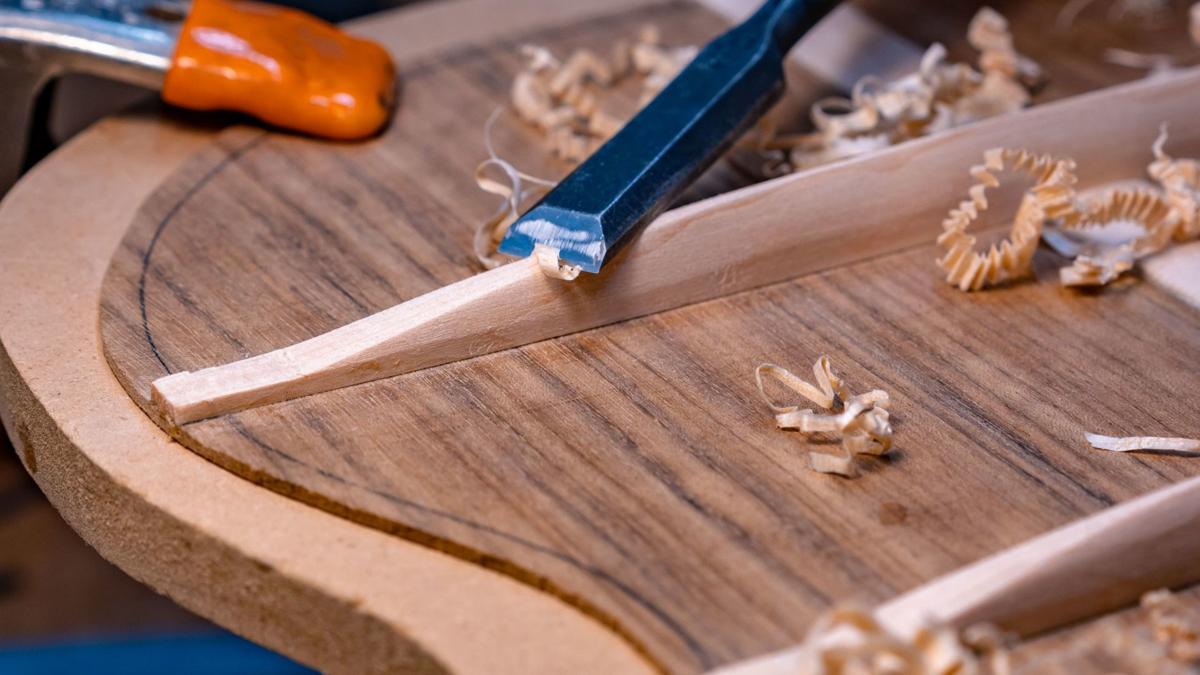 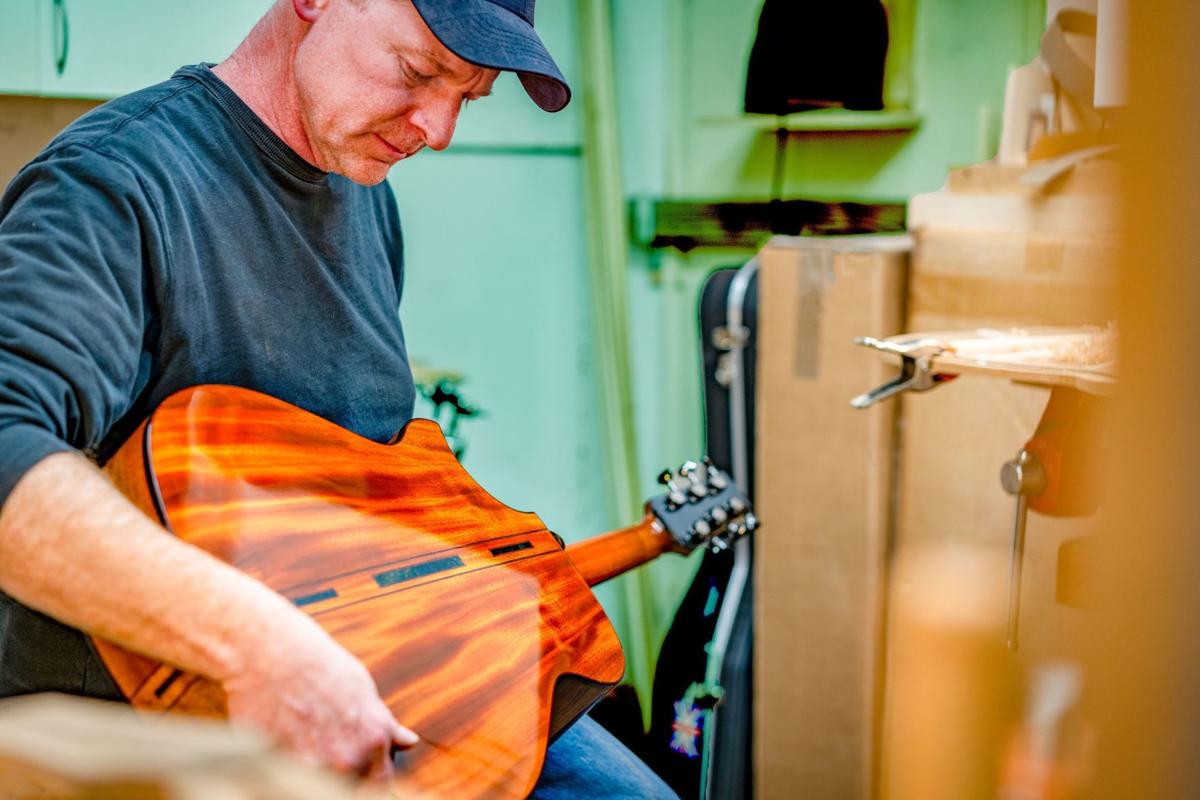 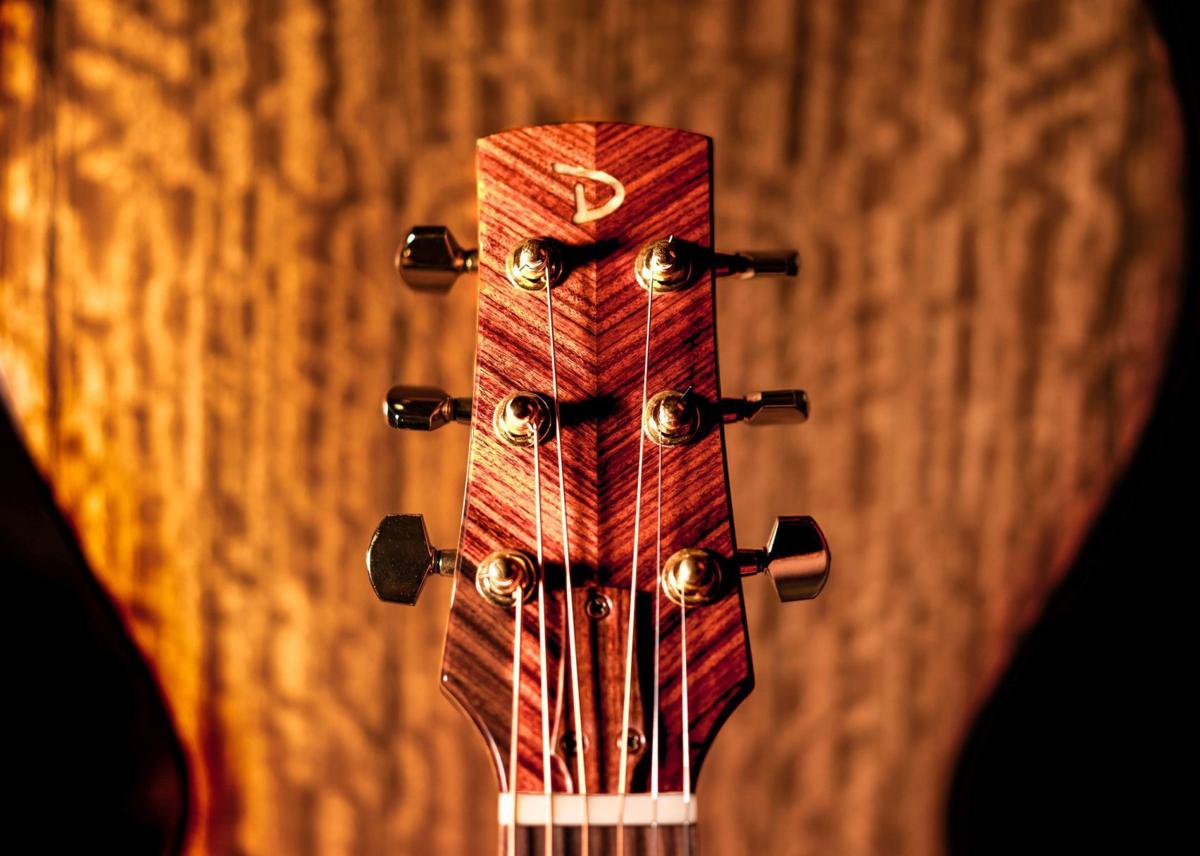 “I’ve been working with wood my entire life, but when I saw a handmade guitar in 2011, I was blown away,” Datlen said. “It was a stunning piece of craftsmanship but it also gave voice to the wood, and that was altogether new to me.”

From that point, Datlen has been on a quest to craft the perfect guitar.

“Unlike a piece of custom furniture that is built with stability and sturdiness in mind, guitars are built to the edge of collapse,” he said. “They must resonate and amplify the sound, which means they must be delicate, light and with an eye toward playability.”

Like many artisans, Datlen grew up with a keen interest in his craft.

“We moved to the States when I was 15, but I was a kid up in Toronto,” he said. “ No matter where I was I knew my interest was creating things from scratch, mostly using wood as my medium.”

He often helped his father do projects around their home such as building a new fence or deck, often with jazz and blues music playing in the background.

“My dad was a big fan of jazz, and I like jazz, but for me I’ve also always loved the old Mississippi and Chicago blues like Muddy Waters, Buddy Guy, B.B. King, Howlin’ Wolf and many others,” he said. “The depth of both the emotion and sound of music has always spoken to me.”

When Datlen’s family moved from Canada and settled in the Bay Area, he soon found himself working at a local cabinet shop and mill, where he learned the craft of restoring older Victorian homes, eventually specializing in crafting custom cabinets, windows, doors and curved moldings.

“[John] came to work with me as an apprentice cabinetmaker at El Cerrito Mill and Lumber Co. right out of high school. He was recommended by the wood-shop teacher,” said cabinetmaker Jack Moore. “The mill had many highly skilled craftsmen, and John was taught the old-school way of woodworking. He was green but eager to learn, and I could tell very quickly he had a gift for woodworking.”

Datlen was eventually hired on at the mill, where he continued to learn the art of intricate woodworking and was often involved in historic restoration projects. Eventually he started his own business that thrived for years, but during the Great Recession business slowed.

“It was one of the few times in my life when I had some extra time,” he said. “It was hard, but it was a good thing, too, because it allowed me to spend time with my wife and children, and also explore other avenues for woodworking.”

With the extra time, Datlen got involved in trying to locate a custom-made stand-up bass for his daughter, who played one in her high school band.

“We walked into Sexauer Guitars over in Petaluma and met the owner — Bruce Sexauer. It pretty much was like, wow.”

Sexauer is a Northern California luthier who has been building stringed instruments for 52 years. Known for his custom-made guitars, he also builds violins, dulcimers, mandolins, flamenco guitars and standup basses. Since he is one of the world’s leading luthiers, a Sexauer guitar can start at $15,000.

“They were stunning to look at, but he was making wood sing and I thought I really need to pursue this path,” Datlen said. “So I went back to my workshop and started making my first guitar.”

Eventually, Datlen would bring his early models to Sexauer for assessment and guidance.

“Many new luthiers are only interested in making what I call coffee-table guitars — they might look nice but often they don’t make sound that resonates,” Sexauer said. “What I appreciate about John is that he has accepted feedback and incorporates what works for him — not changing to fit someone else’s style but improving and developing his own. I can see his growth, and he seems to understand that to make beautiful sound a guitar must be sturdy but also delicate so that it responds equally at all pitches, ensuring balance.”

For the world’s most sought-after luthiers, there can be a two- to three-year wait for a custom guitar. At the moment there is no waitlist for Datlen’s guitars, but even so each one takes eight to nine months to complete. Now, with more than 40 guitars under his belt, he’s finding a following of collectors and enthusiasts.

After playing one of Datlen’s early guitars, Jason Newsted, the former bassist of the heavy-metal band Metallica, purchased it and also had another exact replica built so that he could have the “same” guitar at each of his two homes — one on the East Coast and one on the West Coast. Even less-famous players have become enthusiastic fans, such as Jack Wills, a finger-style guitarist living in Ohio who collects luthier-made guitars.

“When I heard John interviewed on Stevie Coyle’s ‘Mighty Fine Guitar’ show I ordered two guitars straightaway,” Wills said. “His work was striking to look at, but his attention to detail and technical expertise create an instrument that is incredible — magical, really. When I received my first one it was almost like the guitar played itself. They are so well crafted that it shows John’s love of both wood and sound.”

Wills purchased his guitars for $3,800 each.

That was two years ago, but he estimates that they’ll soon be worth much more once people learn about their quality.

“Some people buy extra homes or boats, but I am into guitars,” Wills said. “Once musicians figure out John’s level of quality I can imagine that if I ever needed a third that I’d be paying much more.”

Datlen is still working his day job making furniture and cabinets and using his home workshop to make guitars. Customers can purchase instruments through his site (datlenluthiery.com) or at Mighty Fine Guitars in Lafayette.

“I spend eight hours a day working with wood and then I come home and spend hours making guitars,” he said. It’s not work, but instead it’s something I look forward to doing.”

The smell of cut wood, lacquer and some quiet, unfamiliar blues music filled the air his workshop. A few unfinished guitars lay on a table in various stages of completion.

“I’ve made a lot of fine things in my life — cabinets, tabletops, intricate molding — but a guitar is something that might last 50 or 100 years making music with an artist. It’s not that those other things I have made aren’t important or haven’t provided a certain type of joy, but making a musical instrument is just something that really resonates.”

John Datlen in his workshop.