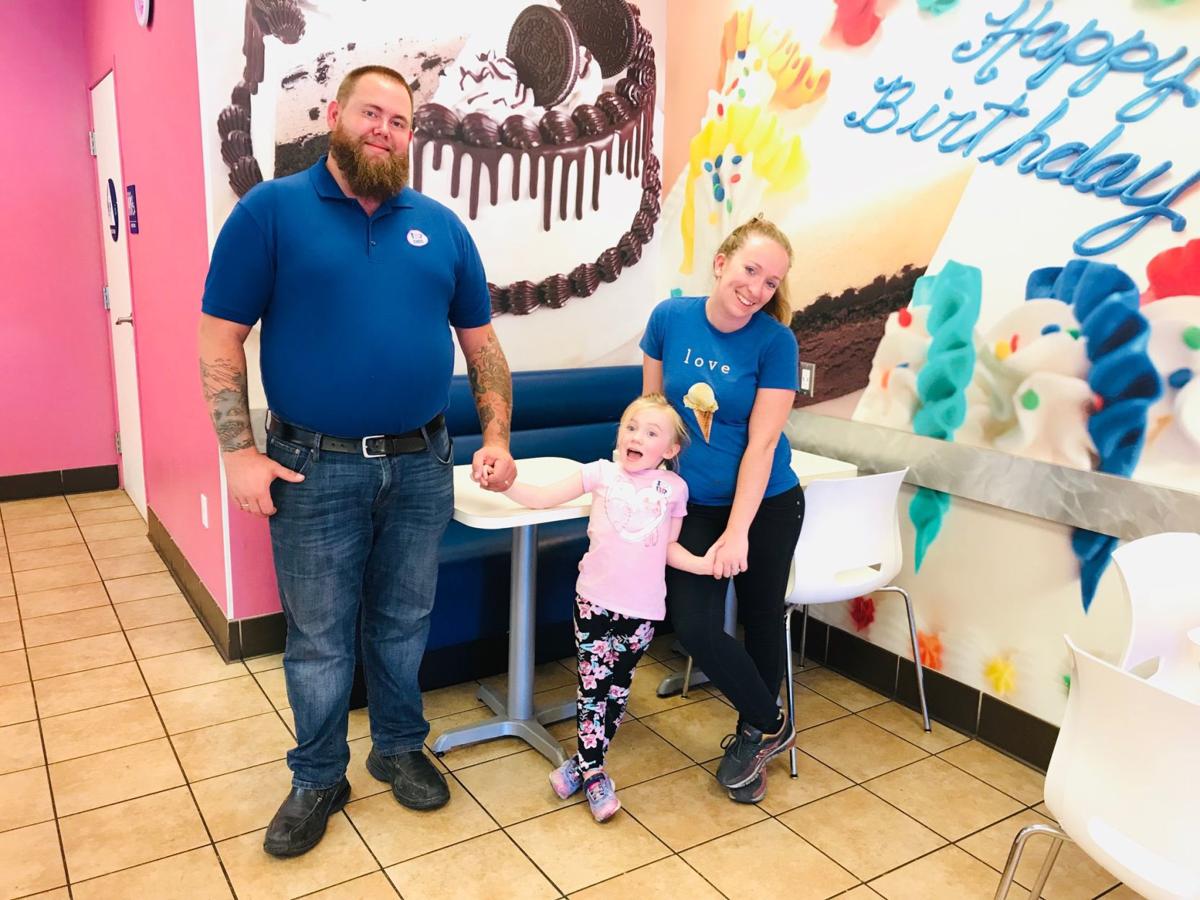 Joseph Ritchey and Sarah Ritchey are the new owners of the Baskin Robbins franchise on Solano Avenue. The store – which had been closed for several months -- is located at 3373 Solano Ave. in Napa, in the Redwood Plaza shopping center. Their daughter, Abigail Ritchey, is seen here with her parents. 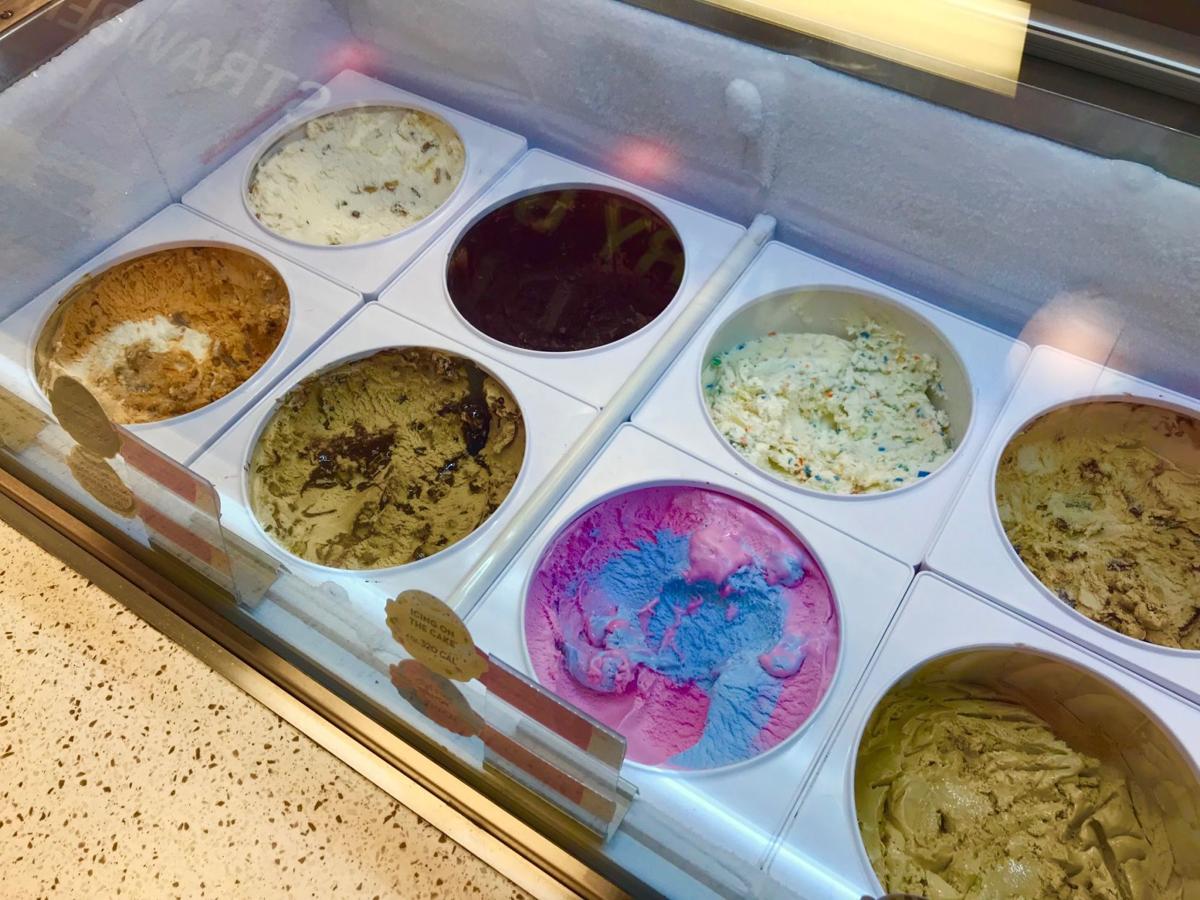 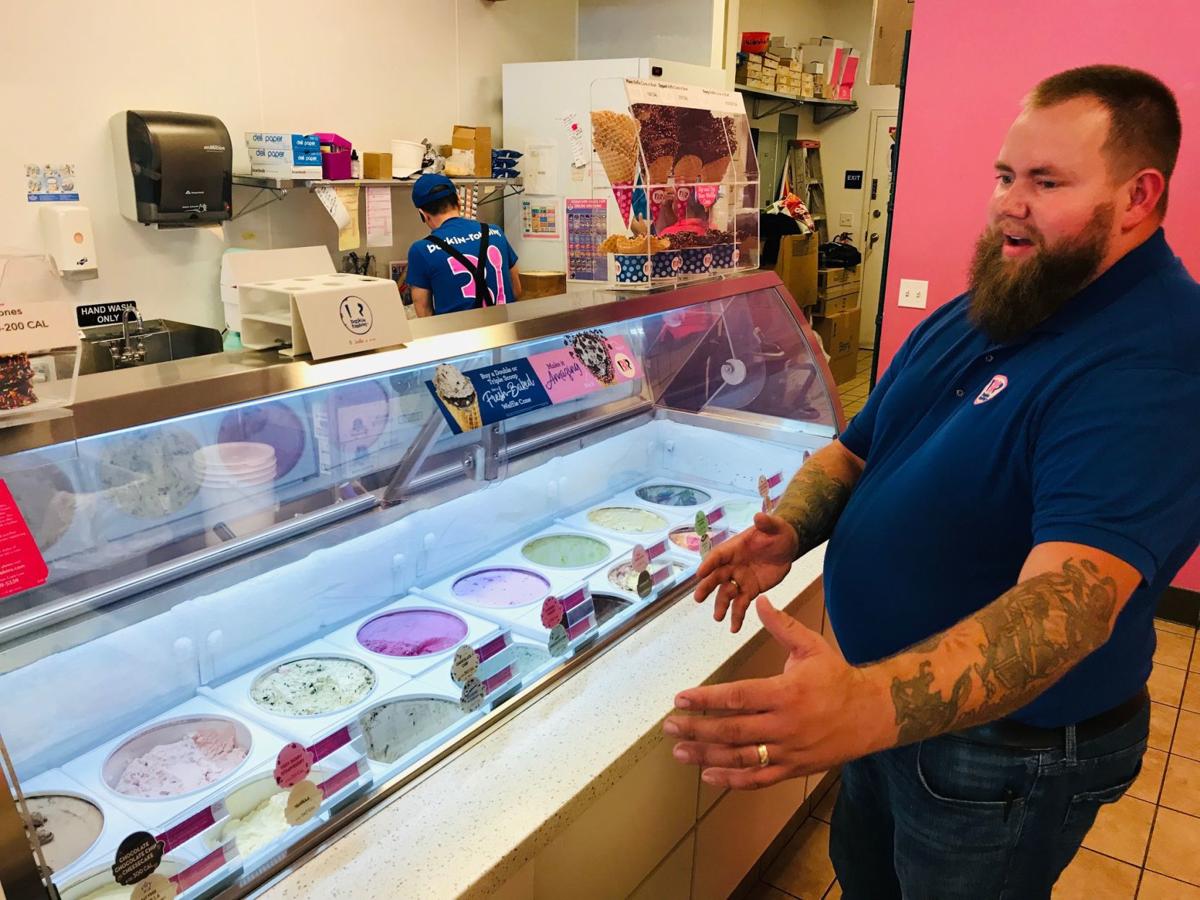 Joseph Ritchey shows off some of the many flavors of ice cream at Baskin Robbins. 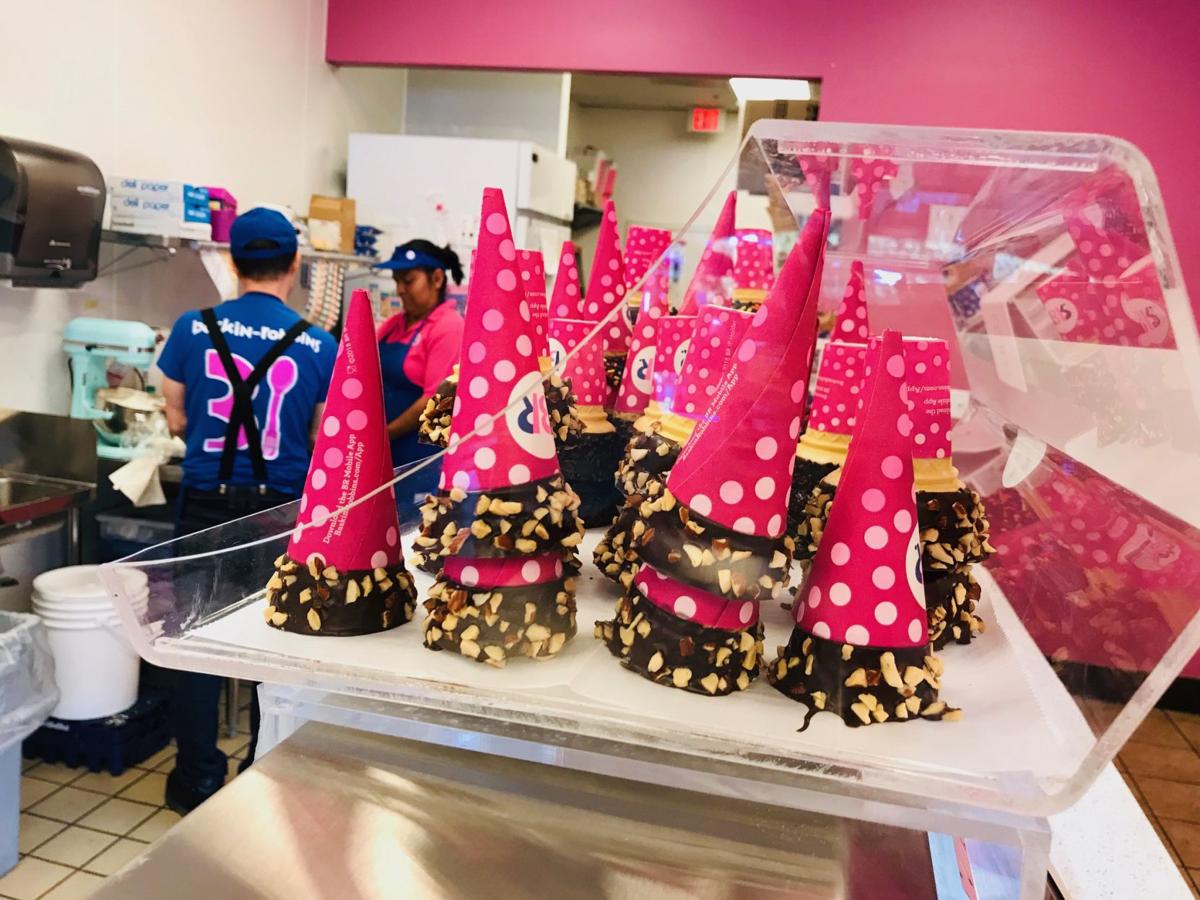 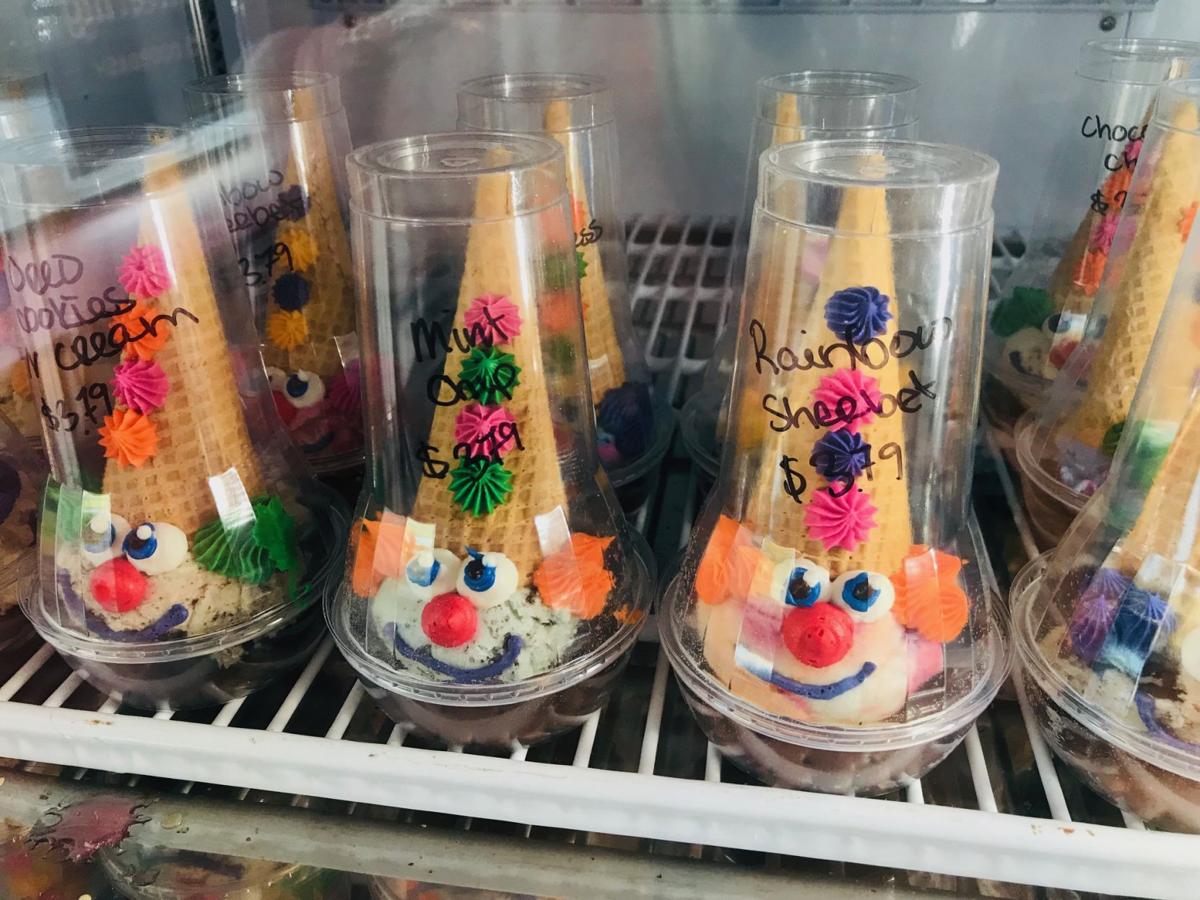 These are clown cones at Napa's Baskin Robbins store.

The couple took over the franchise after former owners were forced to close the business due to a dispute regarding franchise fees.

After being closed for several months, the ice cream shop reopened this past Thursday.

The couple is new to Napa business ownership but not new to Baskin Robbins. Since 2017, they’ve owned and run a Baskin Robbins franchise in Windsor.

That business has been a success, but they did face a big challenge soon after taking ownership when the 2017 wildfires hit the area around Windsor.

Their business took a downturn but, “we mustered through it together,” he said.

Ritchey credits that success to their strong emphasis on making sure both employees and customers are taken care of.

“It’s a great opportunity for us,” he said.

A second Baskin Robbins (and Togo’s) franchise had also closed in the south Napa Marketplace but that franchise was not available, he said.

“We’re very happy with the store and crew,” at his new location, said Ritchey.

The small business owner said he was able to rehire a number of the employees from both closed Baskin Robbins cafes.

One big change customers might notice is that prices are lower.

“The prior management had raised prices significantly – well beyond what I’m comfortable with. I think we can do better for the guests,” he said.

In response, “We’re reducing prices on almost everything,” — as much as 50 cents to $2 less for individual products.

Ritchey said he’s an advocate for small business ownership because it offers a chance for those who are motivated to own their own enterprise. He’s a bit of an entrepreneur, having started and sold other small retail businesses in Arcata and Lower Lake areas.

“I don’t come from a wealthy family,” he said. “Everything I’ve started I’ve started from savings and grew from nothing.”

Ritchey said he chose to be a Baskin Robbins franchise owner because it’s a family-friendly business. The couple has a daughter, Abigail, who is 4 1/2.

This new Napa business owner said one thing people might be surprised to know about Baskin Robbins is just how busy the stores are.

Baskin-Robbins was founded in 1945 in Glendale, California by Burton Baskin and Irvine Robbins, ice cream enthusiasts and brothers-in-law, according to the company website.

What was once a selection of 31 flavors—Baskin-Robbins “31” stands for a different ice cream flavor for each day of the month—has grown to more than 1,300 in its flavor library.

There are more than 8,000 Baskin-Robbins locations around the world, with more than 2,500 located in the United States.

This isn’t the only recent change at Redwood Plaza. A salon, Lavender Nails and Spa, recently opened at the center. Grocery Outlet is reviewing the former Vallerga’s Market location for a potential second Grocery Outlet in Napa.

BJ’s Petal Pushers, a longtime Napa florist, is using its July move to 2762 Old Sonoma Road as a way to introduce the store to customers.

As a mom, Caroline Tikhonoff of Napa spends time playing with her young son, but she also still likes to get “dolled up” with clothing and acc…

The first Starbucks opened in Seattle in 1971. Today there are over 20,000 stores and growing around the globe. Lines form from Brooklyn to Bo…

How to Build Up Your Credit from Nothing

How to Build Up Your Credit from Nothing

Joseph Ritchey and Sarah Ritchey are the new owners of the Baskin Robbins franchise on Solano Avenue. The store – which had been closed for several months -- is located at 3373 Solano Ave. in Napa, in the Redwood Plaza shopping center. Their daughter, Abigail Ritchey, is seen here with her parents.

Joseph Ritchey shows off some of the many flavors of ice cream at Baskin Robbins.

These are clown cones at Napa's Baskin Robbins store.