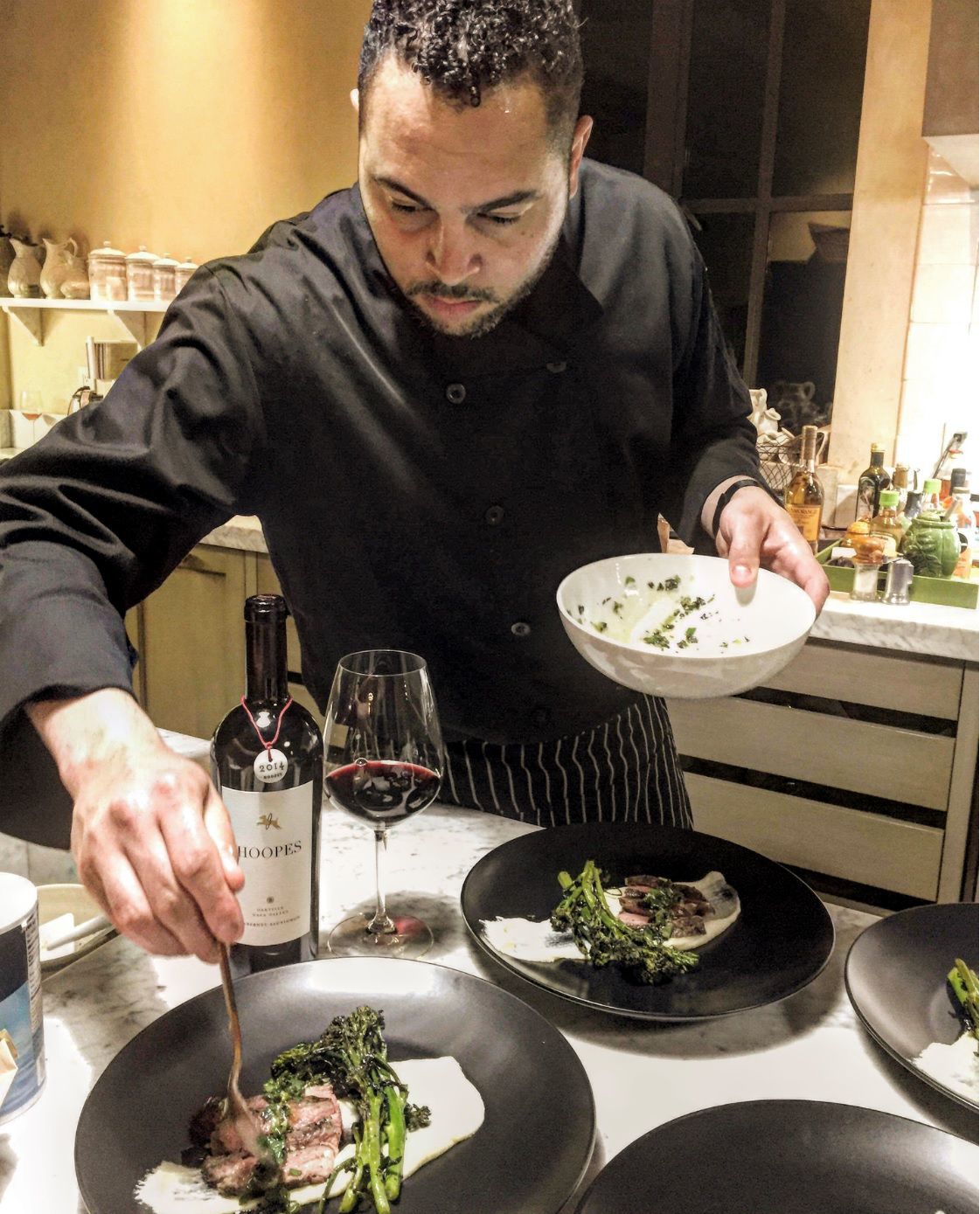 Cameron Bouldin started Nicholas Wayne catering three months ago. The business name is a combination of his and his young son’s middle names. 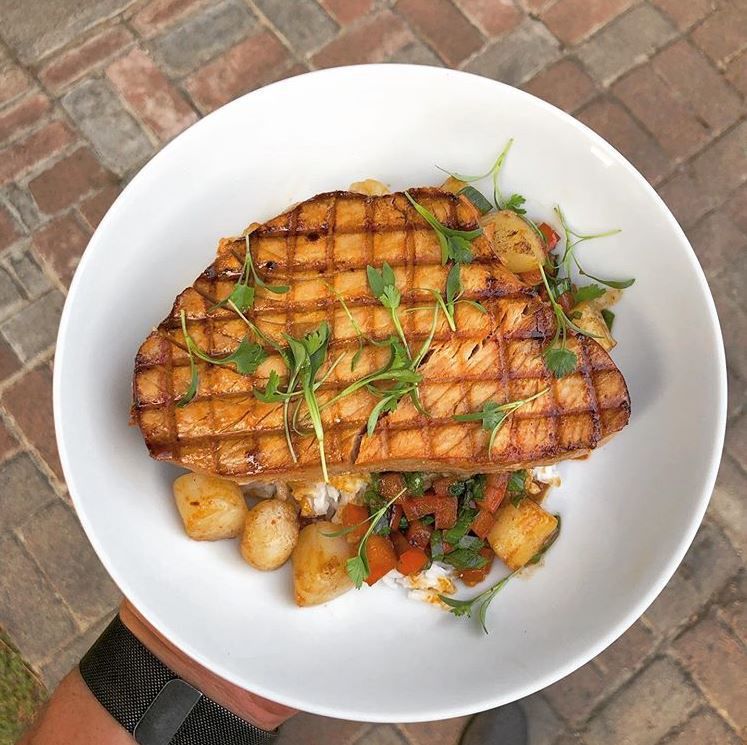 This is one of his recent dishes: seared ahi tuna steak with bell pepper, scallops and jasmine rice. 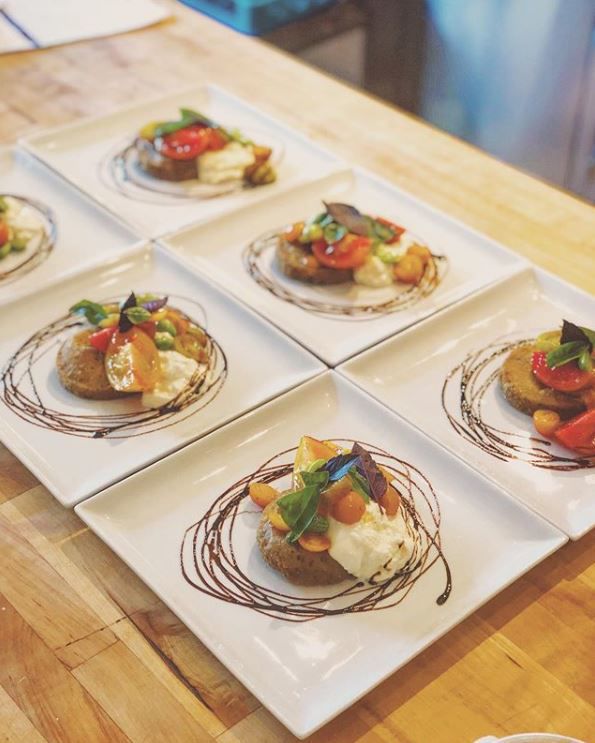 This is one of his recent dishes: pesto polenta cakes with variety garden tomatoes, burrata cheese and fresh torn basil.

Cameron Bouldin started Nicholas Wayne catering three months ago. The business name is a combination of his and his young son’s middle names.

This is one of his recent dishes: seared ahi tuna steak with bell pepper, scallops and jasmine rice.

This is one of his recent dishes: pesto polenta cakes with variety garden tomatoes, burrata cheese and fresh torn basil.

You have a big occasion coming up and you want to do something besides the same old, same old to make for an extra special meal.

Nicholas Wayne Company has just the thing. A four-course dinner including wine pairings, catered and prepared right in front of you, in your own home, for parties small or large.

Cameron Bouldin would like you to leave all the planning and preparation to him. Bouldin started Nicholas Wayne catering three months ago. The name of Bouldin’s business is a combination of he and his young son’s middle names.

“I began thinking about a catering business back in 2016, when I moved up here from the East Bay,” Bouldin said. He most recently lived in Napa, but just moved to Sonoma.

“Before that I had thought about catering from time to time and I would help friends out. They were always pushing me to start working in a kitchen. I had always just cooked for fun. And if I went to work in a kitchen, it was going to be a job so I never really wanted to combine the two,” he said.

Bouldin’s break came when a friend of his was helping out Napa’s Oenotri restaurant at the BottleRock Music Festival in 2016.

“I had never had any experience in a kitchen,” Bouldin said. “But a friend called me and said they needed extra help. After that, I started helping them out with food prep here and there.”

“One day, the owner, Tyler Rodde, asked me if I wanted to go to work for Oenotri and I started the next day,” Bouldin said.

“I started at the bottom and one thing kind of led to another and about a year and a half later I became the sous chef there and stayed there until earlier this year.”

Bouldin said he expanded his knowledge of the catering business by helping out with Napa Valley Heritage out of Calistoga.

“They have a deli, but they also do catering for private and larger events at wineries in the area,” he said. “I like catering because you don’t get bogged down with a set menu, you’re more open to what the customer wants.”

“You can play around more. I worked with them off and on over the last three years and that kind of pushed me to start my own business and do little private dinners here and there,” he added.

“I did a few before I really got the business up and going just to kind of test it out and see if it was something I really wanted to do, and about three months ago, I just decided to jump in and get started.”

Bouldin still considers himself new to the Napa Valley and new to professionally to the area.

“It’s all about the contacts you have, the majority of what I have been able to build up so far is by word of mouth,” he said. “There are a lot of companies out there who do catering in this area.”

Depending on the type of dinner that people want, Bouldin said he can come in to people’s homes and do the cooking if that’s what is desired or he can just drop off the food.

“If you are going to be at a winery with some friends I can do those type of dinners as well,” he said. “It could be as simple as three courses or as many as eight. I can also cater breakfasts, brunches and lunches, I don’t want to limit myself to any one thing.”

Bouldin said if he is known for anything, it’s that he likes to prepare things over an open fire.

“I love the flavor of the smoke you get from a grill and the different ways you can prepare like slow cooking. I’m also known for my plating and making sure the foods I serve look appetizing.”

“I like to keep my menus seasonal and change them up all the time,” Bouldin added. “I use my girlfriend and other friends as guinea pigs,” he chuckled.

“It doesn’t mean someone isn’t going to come for you and ask for crab out of season, I can still do it it’s just a little more challenging,” Bouldin said.

“I just like to cook good food. We have access to everything here in California so it’s pretty much whatever people want. I leave it up to the customer,” he said.

Bouldin said the cost depends on the scope of the occasion.

“I have done dinners where it is as few as two people, paired with wines if you want that, and as many as 12-15 people,” he said.

“I’ve done it for as low as $100 for two people where there is not that much work involved. Or it can go as much as $95-$150 a person if they wanted expensive items like truffles for instance,” Bouldin said.

“I’m willing to meet with people ahead of time to find out your price range and explain what I can do.”

Dr. Juli Mazi said she felt the call to be a healer and a teacher at a very early age.