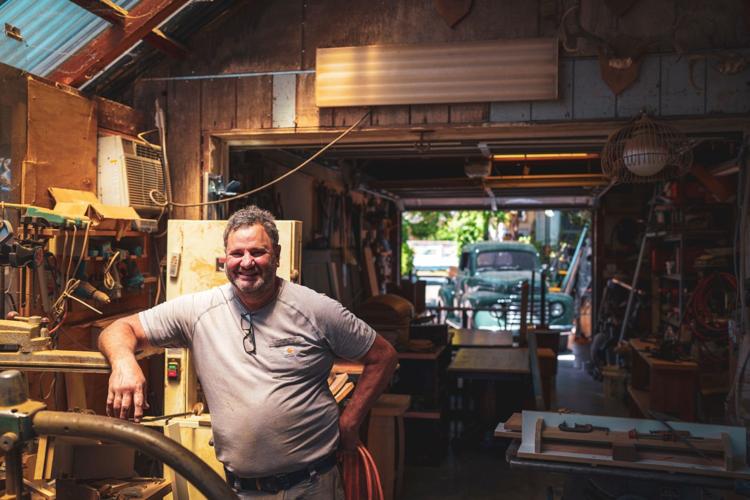 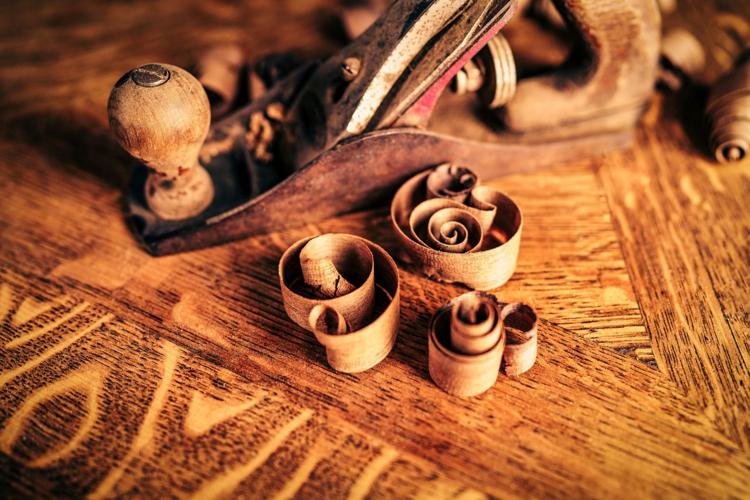 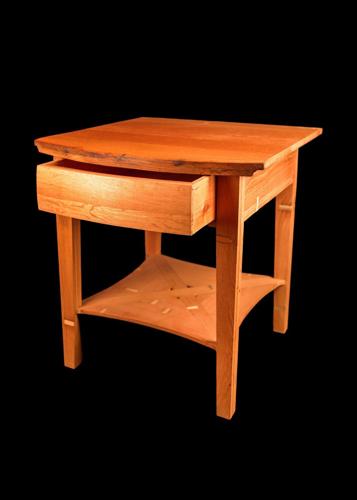 Some of Philip Beltrami's work. 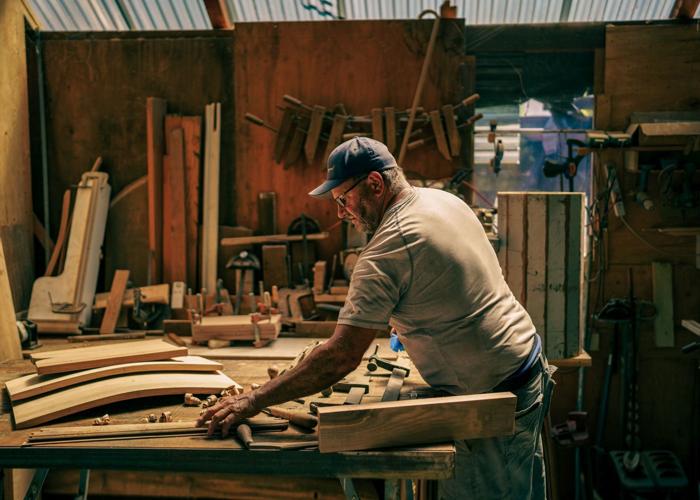 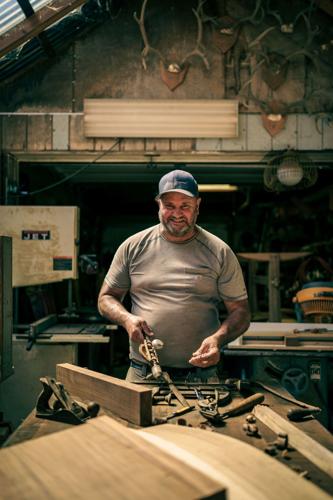 Part expert woodworker and part historian, over the years he has shifted away from construction to focus on crafting tables, chests, and other furniture pieces that are beautiful to look at while they also reveal layers of stories contained within the reclaimed wood itself.

Like a true magician, Beltrami reanimates old wine barrels, ancient wooden wine tanks and discarded planks from barns and demolished structures from some of the region’s first wineries. Look closely at any of his pieces and you will see intricate wood-grain patterns from trees cut down long ago, maybe a retained hand-drilled dowel or two, perhaps the red stain from an ancient wine or barrel end cuts that look saw-tooth jagged, even a few bungholes from where an enormous corked plugged an ancient wine barrel from years past.

Beltrami’s furniture pieces are works of art. They are built by a man with deep roots to the region, often using tools left to him by old-timers after they passed away. Each piece is a reflection of nature’s grandeur, his love of craft and a deep reverence for history and effort, as if giving a respectful nod to those long-past trees and also to the men and woman who have made the valley what it is today.

Giving voice to the past

We sat in his workshop — an old converted garage at his home in St. Helena. Every shelf and surface was replete with tools that looked as if they might have time-traveled from a blacksmith’s shop from centuries earlier. It's a slow, peaceful place, one where you might notice something surprising within something long forgotten.

“I was taught to respect not only the material but also all the skill and many hours of work that were needed to create something of use,” he said. “When I build anything I feel like I am giving voice to that past. To me, the remembering and sharing of memories is a big part of each piece I make.”

Beltrami grew up in St. Helena and graduated from high school in 1981. He was the football quarterback who took his small-town team to a 1980 winning season, and in the same year he earned the most valuable player award for his role on the baseball team. After graduation he immediately started working construction, following in the footsteps of many of his family members.

Sometime in the late 1800s, Beltrami’s great-great-grand uncle, Angelo Borla, immigrated to the Napa Valley from the tiny village of Medeglia within the Ticino canton of Switzerland, which borders Italy. Even in 2010 only 355 residents lived in Medeglia. And although since 1803 Ticino has been one of the 26 cantons forming the Swiss Confederation, for centuries this remote region within the foothills of the Alps has had the influence of a confluence of cultures — Swiss, German, Italian and Celtic. However, then, like today, the official language of Ticino was Italian.

The Ticino region is known for its Lake Como district, high-quality Merlot wines, sublime polenta-based dishes and craft beer. It is also known for the expert masons who built ornate cathedrals, intricate estates, grand wineries and flawless stone roads. One of the most famous stone structures in the region — the Castello Visconti — is widely thought to have been designed by Leonardo da Vinci. The masons of Ticino have been in demand for centuries.

Back in the mid-to-late 1800s, when an influx of new money flooded into California because of the gold rush, a booming fur trade and the construction of railroads —the Napa Valley drew a collection of entrepreneurs, many of whom desired to build their own grand wine estates. Most of these new construction projects were modeled after those found in Europe, and many sought craftspeople from the famed Ticino region to help build them. One of them was Borla.

“Angelo [Borla] was a mason and was asked here to help build some of the earliest wineries,” Beltrami said. “He worked on — and was even the foreman on — some of the biggest projects at the time — Larkmead, BV, Markham and Spotswood.”

Look around the Napa Valley today and you’ll still find some of the craftsmanship of those times. Tightly knit stones, each expertly carved with intricate details, were created to last not a few years or even a single lifetime but with centuries and multiple generations in mind.

Finding a path forward through the past

Beltrami learned his craft from a parade of mentors who were both family and friends. On one of his first jobs, vintner Robert Pepi mentioned in passing that he needed a few tables built for his new tasting room. The wood he wanted used to make them was discarded redwood from venerable tanks at the Louis Martini winery. The old-growth wood was pristine and had held various vintages of aging wines for decades.

“When I made that first table it just felt right,” he said.

From that day forward, Beltrami kept an eye out for any wood that might be repurposed into something of use, often gifting the finished items to his construction clients.

“What other people might see as a flaw I often see as history,” he said. “Using all those techniques I have been taught by so many and often using the tools that have been left in my care, I can begin to see the end piece emerge — one that tells the story of all the pieces contained within it.”

I’ve known Beltrami and his extensive family since I was a child. He was always quiet, often waiting to ask the right question at the right time. He is one of the few people I know who look square into your eyes with every word they speak and who speaks with such reverence and respect for the past, deferring nearly all praise to his teachers, family and friends.

The truth is that he straddles the past and the present, and his work reflects this. Purchasing a piece of handcrafted furniture from him has much more in common with those revered masonry structures in the Napa Valley that his ancestors built than a stripped-down modern version.

“I got hurt a few years back, so I needed to slow down with my construction business,” he said. “But what that gave me was the opportunity to focus on this.”

He gestured at items he was working on — a stunning curved chest, a table made from part of a single wine barrel and dozens of other pieces in various stages of completion.

Sit long enough and he can tell you the provenance of each tool, every piece of wood and much of the history behind them. Stay even a fraction longer and you will undoubtedly hear about his gratitude for nearly everyone he has met along his path.

Listening to his stories of the Napa Valley in such a setting was mesmerizing. The sound of his voice mingled with the sweet aroma of freshly sawed oak from a wine barrel and a dustiness from a workshop that seems familiar with hard work. In the moments between stories all was quiet except for the occasional caw of a raven or a distantly passing car.

“Everywhere I turn I can imagine all of those who came before,” he said. “And I feel like they’d want me to remember, too, to show others what they’ve shared with me.”

Photos: The art of Philip Beltrami

Emerging from the pandemic with a bang, Fleetwood restaurant at Calistoga Motor Lodge has fast become a local Calistoga favorite.

Emerging from the pandemic with a bang, Fleetwood has fast become a local favorite.

A love letter to the Napa Valley

The phrase “the Napa Valley” holds a kind of magic for author Tim Carl, who, being from this special place, finds the meaning also changes.

Crows and ravens have cast a spell over humans

Tim Carl delves into the mystery of crows and ravens to discover what has made them so central a character to so many cultural stories throughout history.

The Caymus Chapter of the Daughters of the American Revolution (DAR) will hold their last meeting of 2021 on November 17 at 1 p.m. at the First Presbyterian Church.

Why gas prices are finally letting up and for how long

Why you should reframe your relationship to money

Why you should reframe your relationship to money

How inflation is impacting the way people spend their money

How inflation is impacting the way people spend their money

Some of Philip Beltrami's work.