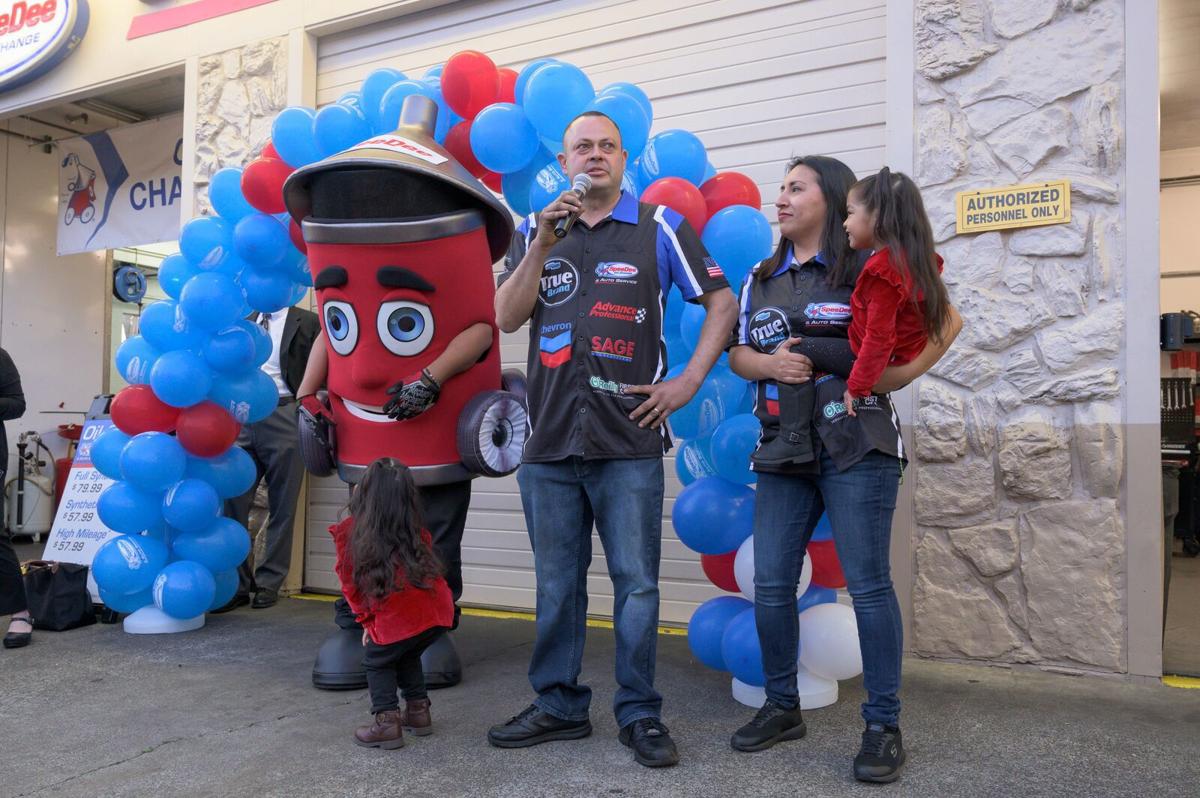 Liz and Lino Ramos (and their daughters) attend the grand opening of SpeeDee Oil Change & Auto Service on Silverado Trail in Napa. 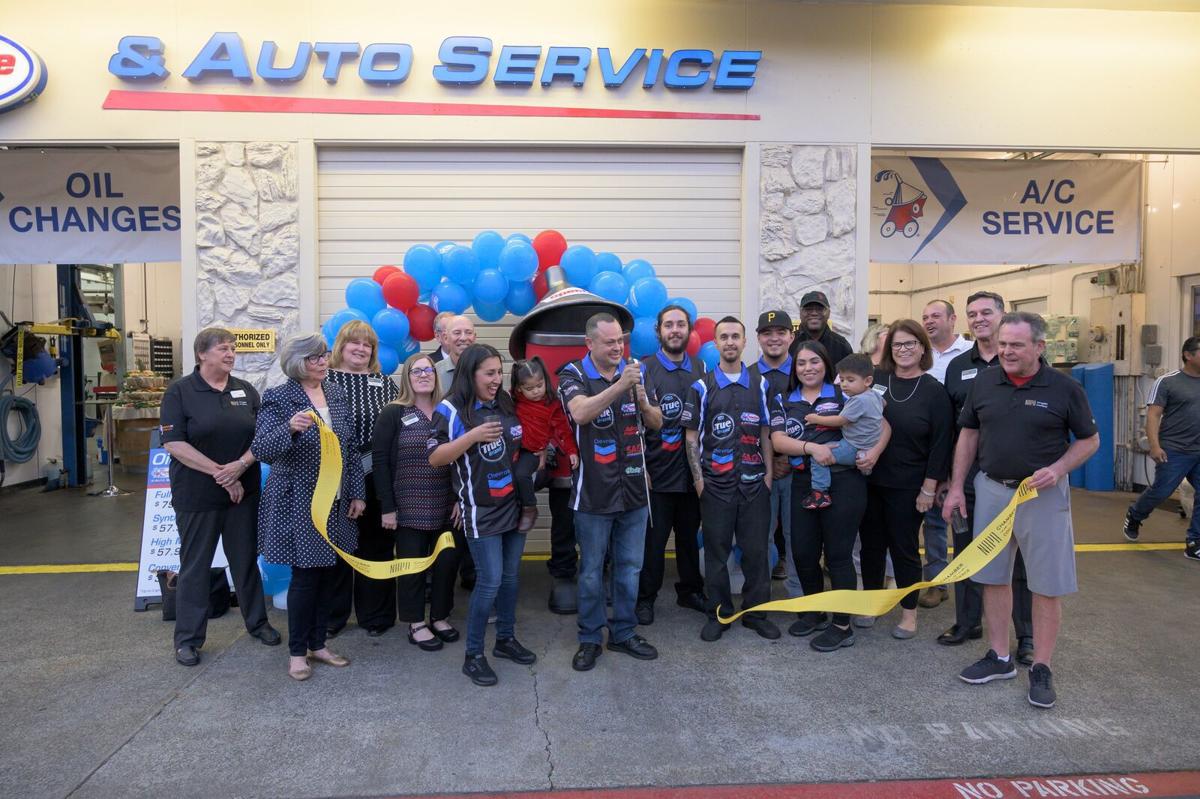 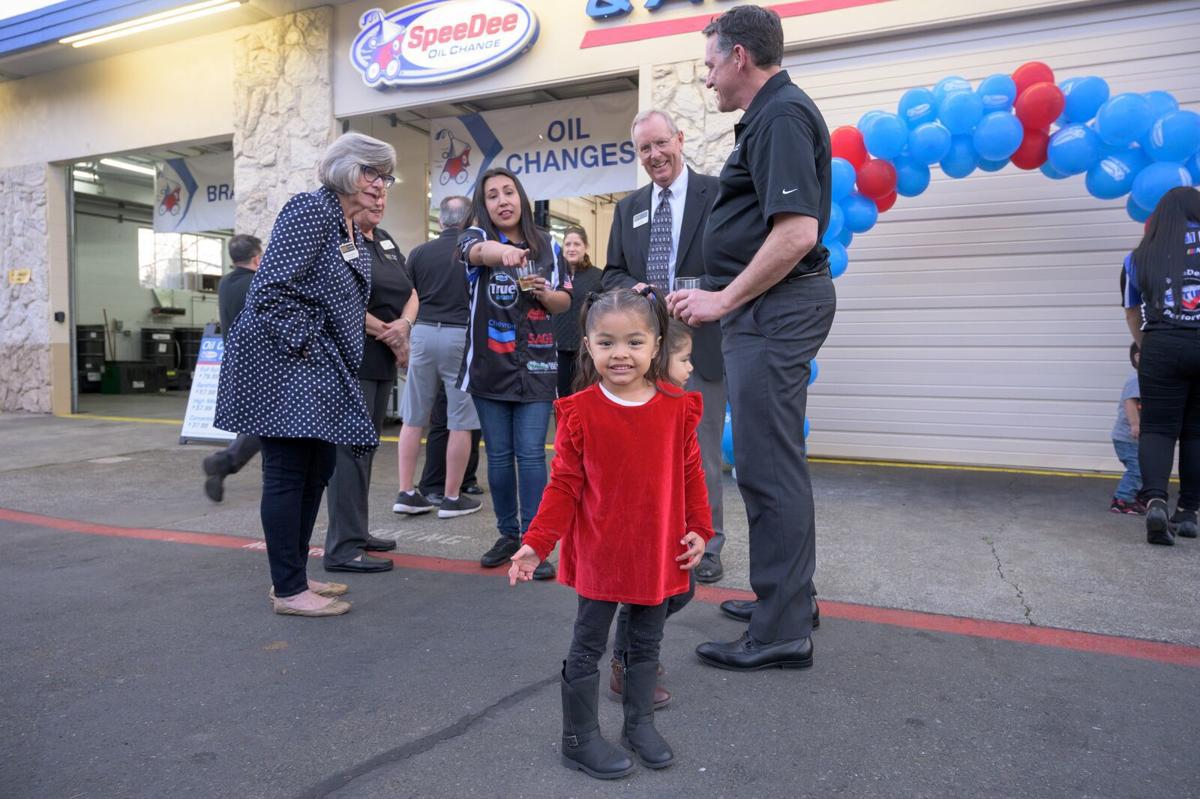 The Ramos family and guests at the official grand opening of At SpeeDee Oil Change & Auto Service on Silverado Trail in Napa. 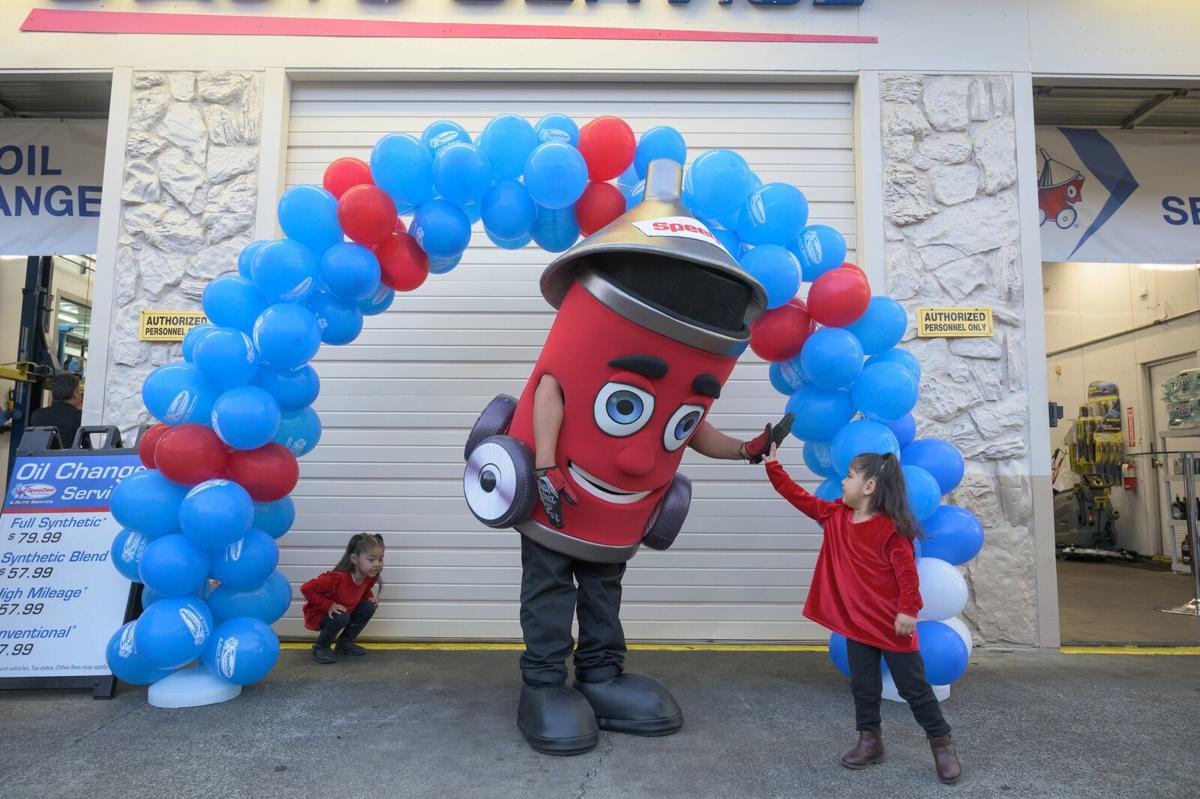 The Ramos' daughters at the official grand opening of At SpeeDee Oil Change & Auto Service on Silverado Trail in Napa. 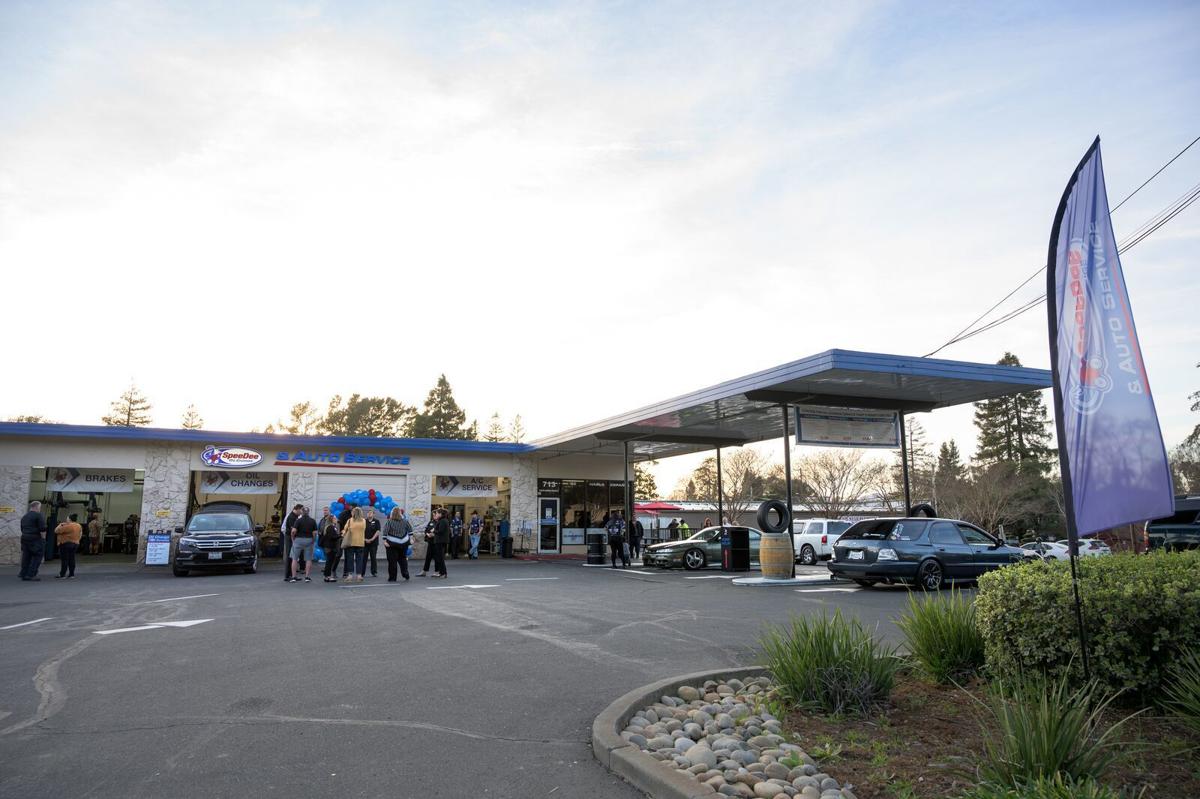 A photo from the Napa Chamber of Commerce grand opening and ribbon cutting at Napa's SpeeDee Oil Change & Auto Service.

At SpeeDee Oil Change & Auto Service, co-owners Liz and Lino Ramos are attracting a wide range of customers with their service and years of experience in auto repair and customer service.

The shop, at 713 Silverado Trail, remains open during the shelter-in-place order. Vehicle maintenance is considered an essential service.

Liz Ramos said she and Lino are helping keep people safe by encouraging any sick employee to stay home, training their employees on health and safety standards, and deep-cleaning and disinfecting the business, including high-touch surfaces.

It also offers a 10 percent discount, up to $30, to first responders, including firefighters and law enforcement officers, Napa Valley College students, faculty and staff, Napa Chamber of Commerce members, and members of St. John the Baptist Church.

“Community is really important to us. We have family members who are first responders. My sister works for Napa Valley College and we are members of St. John the Baptist. When we invite people to come for service at our shop, they help spread word of mouth for us,” said Liz Ramos.

She said she and Lino are used to succeeding under difficult circumstances. The husband-wife team opened the shop in October 2019 during the power shut-offs.

“It was a time between tears and laughter. At that point, we opened our doors to show customers what the shop looked like. We gave out coupons and welcomed people in,” said Liz Ramos.

Liz Ramos said all of the bays have lifts. There is also a live camera on every bay, filming each repair.

“This allows customers to watch work as it is being done. In addition, under normal circumstances, oil changes with 17-point inspections include a vacuuming of the front and rear floorboards of a vehicle,” said Liz Ramos.

She said customers are also coming to the shop because there are bilingual Spanish-English workers.

“Something I have a passion for”

The SpeeDee franchise is Liz and Lino’s first joint venture. Before the shop opened, Lino had one job, for 26 years. Lino Ramos started at Sonoma Raceway at the age of 16, as a maintenance worker. As the years passed, he took different positions. Lino ended his time at the raceway in November 2019, as the director of facilities.

“I oversaw 24 employees, working with a budget of a few million dollars. It was similar to running an auto department. That experience helps me a great deal as head of the shop now,” said Lino Ramos.

One of Lino Ramos’s achievements was developing Sonoma Drift, a Wednesday night program that allows drivers a safe place to learn how to drift.

Drifting is a sport that involves controlling a powerful car as it slides sideways at high speeds through a marked course. Lino is still involved with Sonoma Drift at the raceway, but spends most of his time at the shop.

“I’m usually at our SpeeDee shop at 5 a.m. before we open and stay until 8 p.m. I think I’m dedicated because after so many years at Sonoma Raceway, I wanted to open a business for myself. I also wanted the business to be something I have a passion for,” said Lino Ramos.

“I feel very much at home”

Although Liz Ramos said she’d never do oil changes, she is learning new things. “I’ve helped the cars for oil changes and have helped to vacuum cars and move vehicles into the service bays. I hope to offer smog checks down the road,” said Liz Ramos.

Liz comes to the shop from the couple’s Green Valley home one to two times a week. She manages most of the customer service and marketing from home.

Liz has decades of experience in business management and working in the Napa Valley. Between 2013 and 2018, she ran her own consulting company, Engeniate, in Vallejo. Long before that, she developed contacts and a deep understanding of the Napa Valley.

“I knew Napa from growing up here as a young child,” said Liz Ramos. “My father worked in the vineyards in the 1980s. Later, as an adult, I worked in the early 2000s for the Mondavis. Between 2008 and 2010, I served as the human resources manager for Francis Ford Coppola Winery.”

Liz Ramos said she and Lino expanded their professional network in 2019 when they joined the Napa Chamber of Commerce.

“The Chamber has been very supportive. There’s a great community here. I feel very much at home,” said Liz Ramos.

Understanding customers and a corporation

Chris Jones, a Napa resident, said the courteousness and professionalism of the SpeeDee crew stands out.

“The first time, I brought my car in. The team did a great job. I barely even waited to get service. That’s when I scheduled my wife’s car and my son’s vehicle for appointments,” said Jones.

Beatriz Esquivel-Bockman, also a Napa resident, said she and her daughter were “customers number one and two” at the shop.

“They’re reliable, offer an extremely good price point, and have the experience and relationships to make this work. My family is super excited to have them here,” said Esquivel-Bockman.

Brandon Jacka, operations supervisor at Natural Systems Utilities, LLC, (NSU) a utility company that serves residents and businesses in Napa County, said he came to SpeeDee because he knew Lino was honest.

“They’ve diagnosed a variety of problems without charging extra. It’s been hard to find a shop like that. Some shops don’t want to deal with fleets. Others take advantage. They think a fleet is a never-ending money pool. In contrast, SpeeDee Oil Change & Auto Service has been great,” said Jacka.

“Lino has an extensive mechanical background. Liz has an amazing business and human resources background. Husband-wife teams like theirs also tend to be very dynamic and produce excellent results,” said Brown.

Brown said Lino already has been handy at seeing ways to improve the overall business and “Liz has definitely improved the customer experience.”

He said the Ramos’s shop is the first Napa County location for SpeeDee Worldwide LLC, which is based in Denver.

“We’re watching to see whether they can handle the typical workflow for a SpeeDee shop. The Ramoses have a drive-in, back-out facility. That’s different from the drive-through model, which we have in most of our other locations,” said Brown.

He said the Ramoses have generated a lot of business and attention.

“They’ve gone above and beyond to build special incentives for customers, which speak to their emotional ties to the community,” said Brown.

He said he looks forward to seeing what the Ramoses and their crew can share with the corporate office.

“We’re proud to have them on board. When you think about their commitment to their business, their family, and their church, you can see that any business needs more people like them,” said Brown.

There's a new Grocery Outlet in town -- and it's in north Napa.

Napa's jobless rate just hit a 30-year high. What can workers and employers do?

Leigh Krieger of Minuteman Press knows a thing or two about printing.

The number of homes sold in Napa County in April dropped 27.4 percent but the median sold price rose slightly - to $675,000.

The Napa Premium Outlets have reopened.

House Democrats recently introduced a new stimulus package, including a new round of checks.

Napa’s youngest entrepreneur gets ready to launch a new shoe that he invented.

The Emergency Department at Queen of the Valley Medical Center has been recognized for providing excellent care to older adults.

Liz and Lino Ramos (and their daughters) attend the grand opening of SpeeDee Oil Change & Auto Service on Silverado Trail in Napa.

The Ramos family and guests at the official grand opening of At SpeeDee Oil Change & Auto Service on Silverado Trail in Napa.

The Ramos' daughters at the official grand opening of At SpeeDee Oil Change & Auto Service on Silverado Trail in Napa.

A photo from the Napa Chamber of Commerce grand opening and ribbon cutting at Napa's SpeeDee Oil Change & Auto Service.