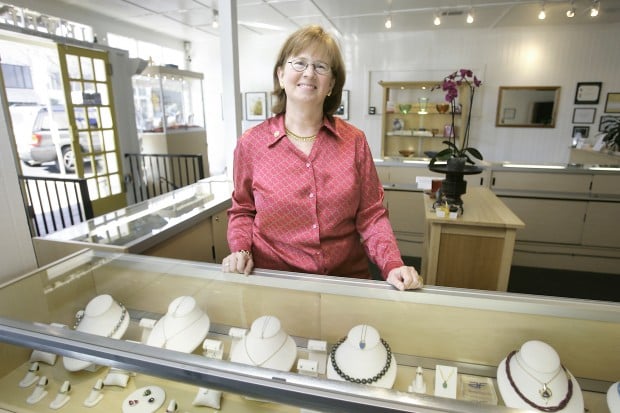 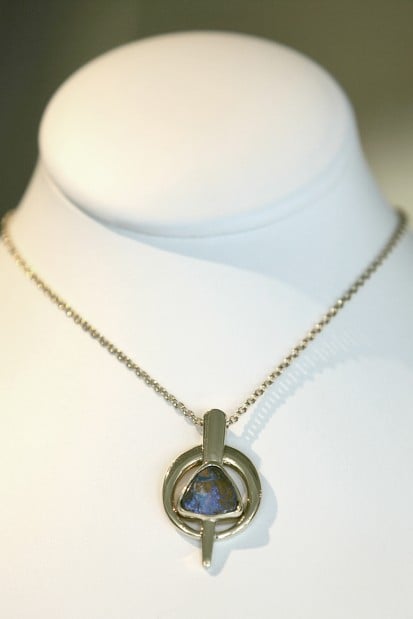 The word goldsmith conjures up a medieval guild or maybe a Renaissance craftsman on Florence’s jewelry-rich Ponte Vecchio creating a small masterpiece for Lorenzo di Medici.

A modern-day representative of this ancient art and craft, however, is Lydia Wilson, owner of Marlowe & Company Jewellers in St. Helena.

Like her predecessors, Wilson, a certified goldsmith, served a long apprenticeship that began with a jewelry making class she took when she was a high school student in Santa Cruz.

“It started with beach combing,” she said, as she described exploring the beaches, finding treasures to turn into jewelry. “I just love beautiful things.”

She went onto UC Berkeley with the intention of studying journalism but soon segued into art. After graduating, she went onto study at Maryland Institute College of Art, which led to an opportunity to study goldsmithing at Revere Academy of Jewelry Arts in San Francisco. At the time, Wilson said, “I didn’t even know goldsmiths existed.”

After a year and a half of studying, she went to work in the field in the South Bay at what which she described as “the lowest end” of the industry. “I was disgusted with the quality of the Jewelry Exchange,” she said. “This was sub-standard, and I was trained on guild level.” Nonetheless, she learned what she did not want to be selling. Too often she said, people, lured by low prices, end up with “bluff pieces, not structurally sound. Durability is a huge factor in the jewelry business. You want to buy something that will last. I’ve repaired engagement rings that haven’t lasted a week.”

She moved on to work at Gleim, a well-respected, high-end family business in Palo Alto. She worked on jewelry as well as selling it. “There, I worked with the best of the best,” she said.

In 2001, she moved to St. Helena, and commuted to work at a Walnut Creek store while she looked for a space to launch her own company. She finally settled on her Main Street location. With the help of friends, she built out the interior and in July 2004, opened Marlowe and Company Jewellers, named for a beloved British Blue shorthair cat — hence the British spelling of the store’s name. His photo hangs in the shop.

From her varied experiences she had firm ideas about what she wanted: top quality work in a comfortable atmosphere.

“I had a lifetime of looking,” Wilson said. “I knew I wouldn’t go into shop that’s condescending or snooty; it was all the more reason to make my store welcoming.”

Her goldsmith’s work station sit at back of the shop behind cases showing pieces of her own work as well as that of other Northern California artists and estate jewelry. She also does assessments, cleaning and repairs, and buys gold. She employs a watch repairman as well.

“It’s full-service,” she said. “If someone comes in wanting something in particular I can make it or find it.” Goldsmiths maintain international contacts, she said, noting that a European colleague will find and ship her a piece. “This field is very old school,” she said. “It’s all about trust in the jewelry business.

“There’s also so much fun in the business,” she added. “Half the fun is discovering new people.”

One of her recent clients was a young UC Davis pre-med student, pockets to let, who thought he should buy diamond earrings for a special girl in his life. An in-depth consultation led him to buy, instead of pin-head sized diamonds, a set of aquamarines that flashed and sparkled — the result of superb quality, beautifully cut, she explained, advising him to “buy her diamonds when you’ve finished medical school.”

“There are 300 other gemstones,” she pointed out. “And I just love rare gems.”

Another customer was a

St. Helena vintner, who lingered to discuss the latest harvest while he picked up jewelry he’d left to be cleaned. He was surprised she required his identification.

“It’s for my sake and his,” Wilson explained. “Once, an elderly  woman picked up some jewels, left, and returned a short while later to pick them up again. She’d forgotten. It’s important that everything is documented.”

“I spend a lot of time educating people,” she said. In addition to clients, she also works with up and coming apprentices. “I help them to become professionals,” she said. “We talk about what’s successful, what’s not. Problem solving. Trouble-shooting. What clasps work and which don’t.”

“A great part about goldsmithing is you know what’s possible,” Wilson said.

For all that it’s an ancient field, new advancements, like laser cutting, are expanding possibilities, she said, showing a necklace of tiny, laser-cut sapphires. “We now have laser welding, gemstone enhancements. You just need to be educated about what you’re buying.”

One of her favorite stories, she said, is about a  woman from Lake Berryessa who had come into a bit of money and wanted to buy herself one piece of jewelry. “Nothing she had was of fine quality. She didn’t have a lot to spend, but we looked at everything until we found just the thing that she could afford. She gifted herself with something beautiful.”

In a $175 million deal, the recently opened resort at 400 Silverado Trail in Calistoga, also known as Four Seasons Napa Valley, will soon be under new ownership.

How to be a savvy shopper amid Cyber Monday hype

Besides recognizing FOMO, here are other ways to be a savvy shopper on Cyber Monday, which is the Monday after Thanksgiving. Also, check out more of the week's best money tips from experts.

10 Questions: Roxana Infante said her mother inspired her to go into health care.

NapaStat | 33%: that's the increase in the number of leisure and hospitality jobs in Napa County this Oct. compared to Oct. 2020.

Black Friday is rapidly morphing into “Hallothanksmas.” Still, some people like to shop on the day itself. Here are the details on store hours during Black Friday 2021.

How to find (and survive) a Buy Nothing group

It's never been easier to get involved in the Buy Nothing Project, the giving-and-wishes movement that saw its numbers soar during the pandemic.

Hedge fund Alden Global Capital has made an offer to acquire Lee Enterprises, owner of the Napa Valley Register.