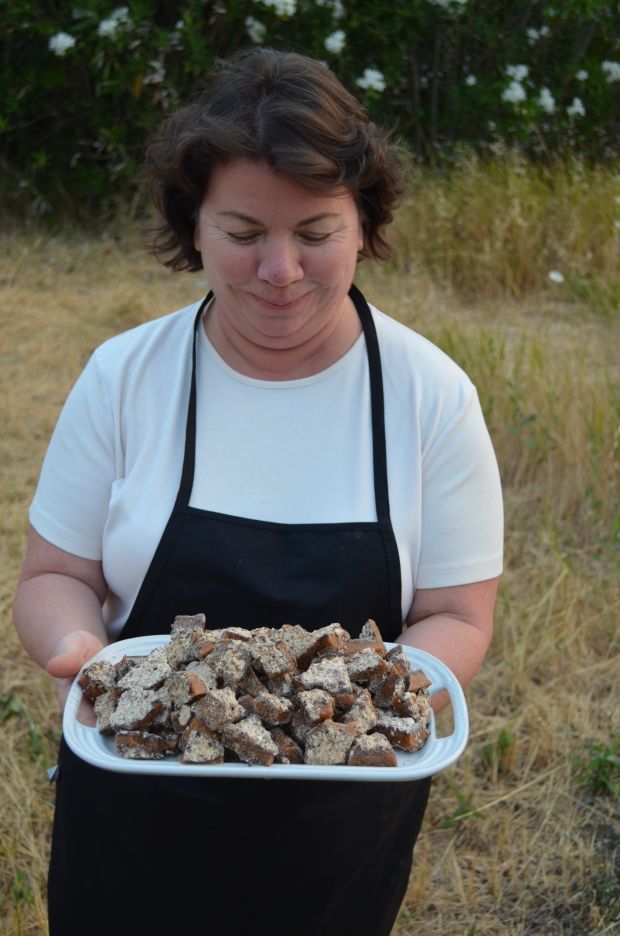 Regina Carlin holds a plate of her homemade toffee, made from a secret family recipe. 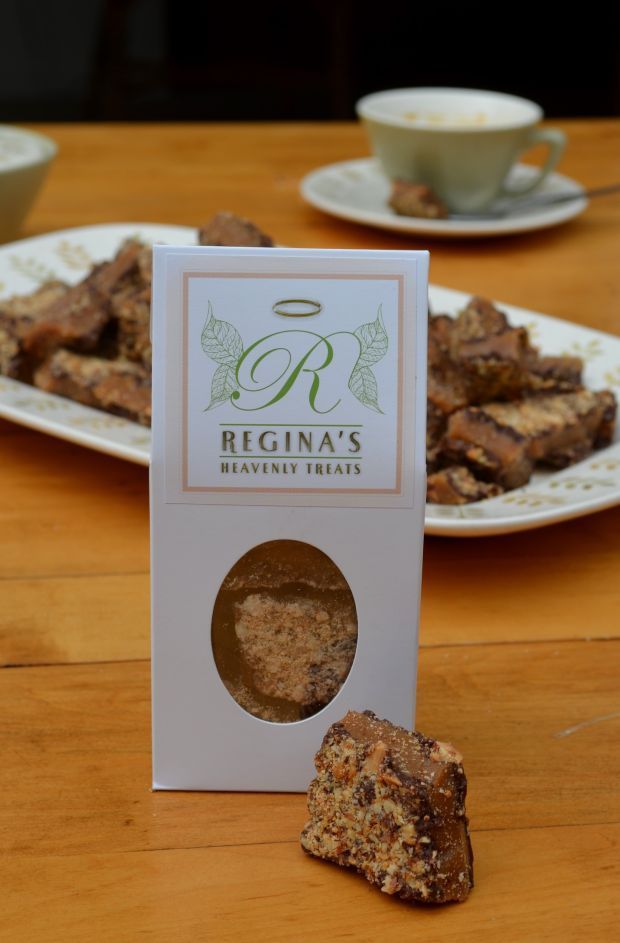 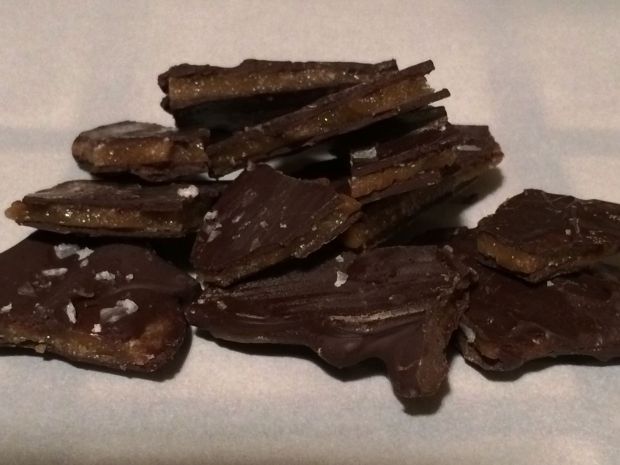 What started out as a family tradition of toffee making has turned into a side business and hopefully more for Calistogan Regina Carlin.

“It’s taken on a life of its own,” she said of her nascent business Regina’s Heavenly Treats.

Carlin (who goes by “Gena,” a shortened version of Regina) is the queen of toffee in town. She’s been so busy with orders for the holidays that she’s actually looking forward to a break after Christmas.

She runs the business in her spare time from her full-time job at Rombauer Vineyards in St. Helena.

Carlin, who has lived in Calistoga for 20 years, started selling her specialty toffee at the Calistoga Farmers Market in October, and has her product in two retail spaces — CalMart in Calistoga and Petaluma Market in Petaluma. After New Year’s, Regina’s Heavenly Treats will likely be for sale in coffee shops and other stores in Calistoga and other surrounding areas.

“It’s like being a kid in the kitchen playing,” Carlin said. “It feeds my creative spirit.”

The original recipe is her grandmother’s, though she learned the process from her sister. They would get together every year and make big batches of it in her hometown of San Francisco.

The recipe is a family secret; the ingredients are largely the same as any other toffee, it’s the process that is special. She makes all her products in small batches to ensure freshness, and each bag is numbered.

The recent storms caused some problems for Carlin; the dampness in the air prevented the toffee from hardening properly.

While working as the tasting room manager of UpValley Vintners on Lincoln Avenue, Carlin would make batches to serve at winery events and people loved it. She started getting more and more requests for the toffee and it just seemed like the right time to start a business.

Everything fell into place, and offers of help to start the business overwhelmed Carlin, leading her to believe this was a meant-to-be moment.

One neighbor who has experience with big-name brands like Nestle and Orowheat helped her with pricing. Another neighbor with art and graphic design skills took the photos for her website. It seemed like the universe was aligning the stars for her.

Thanks to the passage of the Cottage Food Operations law (AB 1616) that went into effect January 2013, Regina’s Heavenly Treats is a home-operated business, saving Carlin the expense of renting a commercial kitchen. Her home kitchen is inspected annually and she’s limited in gross dollar sales and location of sales, but operating the business from her home gives her flexibility.

Flexibility is one reason she has shied away from a dream she still has of owning her own restaurant because of the time commitment and capital required to get started and stay alive. It’s still kind of in the back of her mind, but opening a storefront for the sweet treats sounds manageable, she said.

“I’d love to have a storefront where you can put out a sign that says ‘gone fishing,’” Carlin said.

She attended the Culinary Arts Program at the City College of San Francisco and continued her studies in Europe, spending a summer in Switzerland, where she studied cuisine and wine pairing before moving on to Paris. By the time she came back to California, she was a chocolate connoisseur.

Pairing her treats with wine is a passion — she especially likes chardonnay and merlot with her toffees — and something she hopes she’ll be able to do at the Farmers Market now that wineries are allowed to pour tastes.

The business is a “little extra money” that started as a way to help pay for vets bills for her ill dog, Jessie. It is in Jessie’s honor that Carlin donates 5 percent of profits to TaraSun Animal Rescue.

Winemakers and vintners, both those who were born to the wine industry and those who found an unusual path to the life, could be found in a su…

Regina Carlin holds a plate of her homemade toffee, made from a secret family recipe.