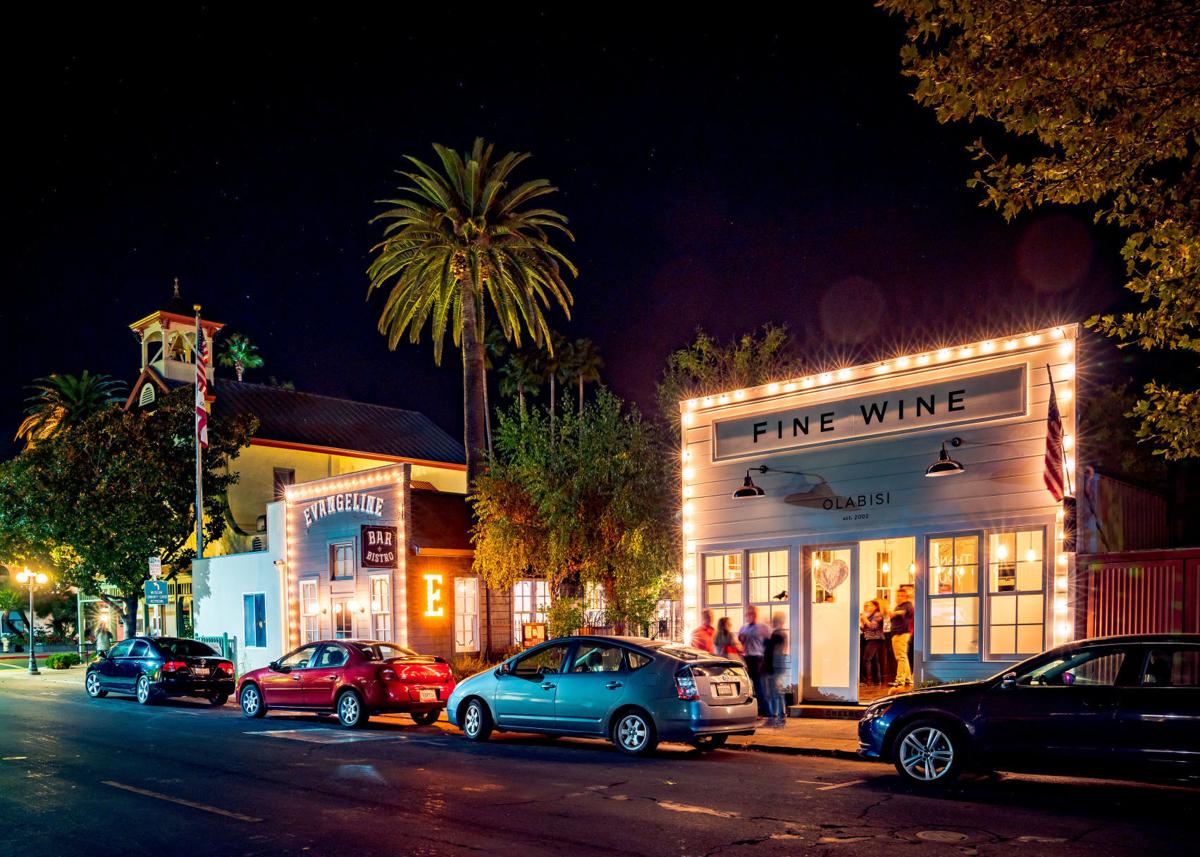 Owner Sasan Nayeri describes Calistoga's Evangeline restaurant, seen at left in the photo, as having “a casual French bistro feel but with a Creole soul.” 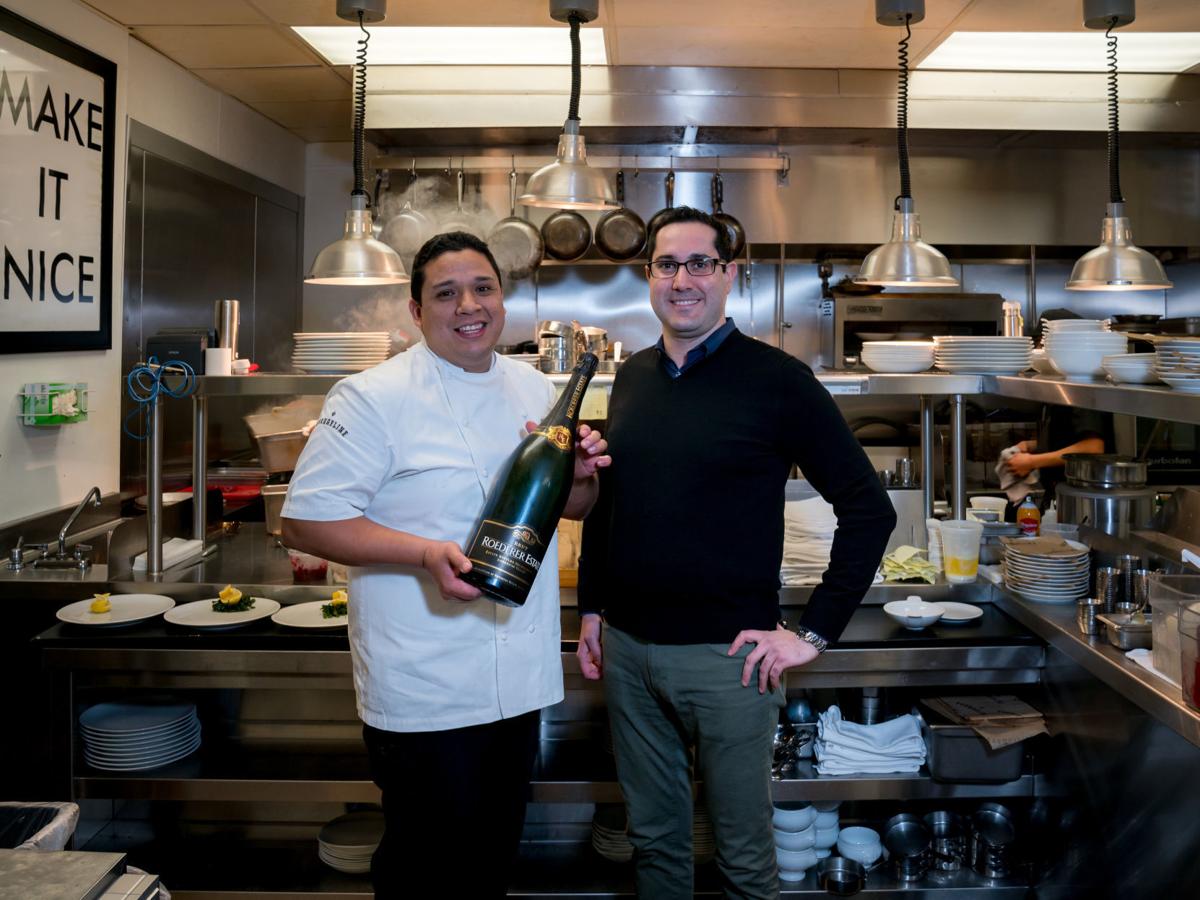 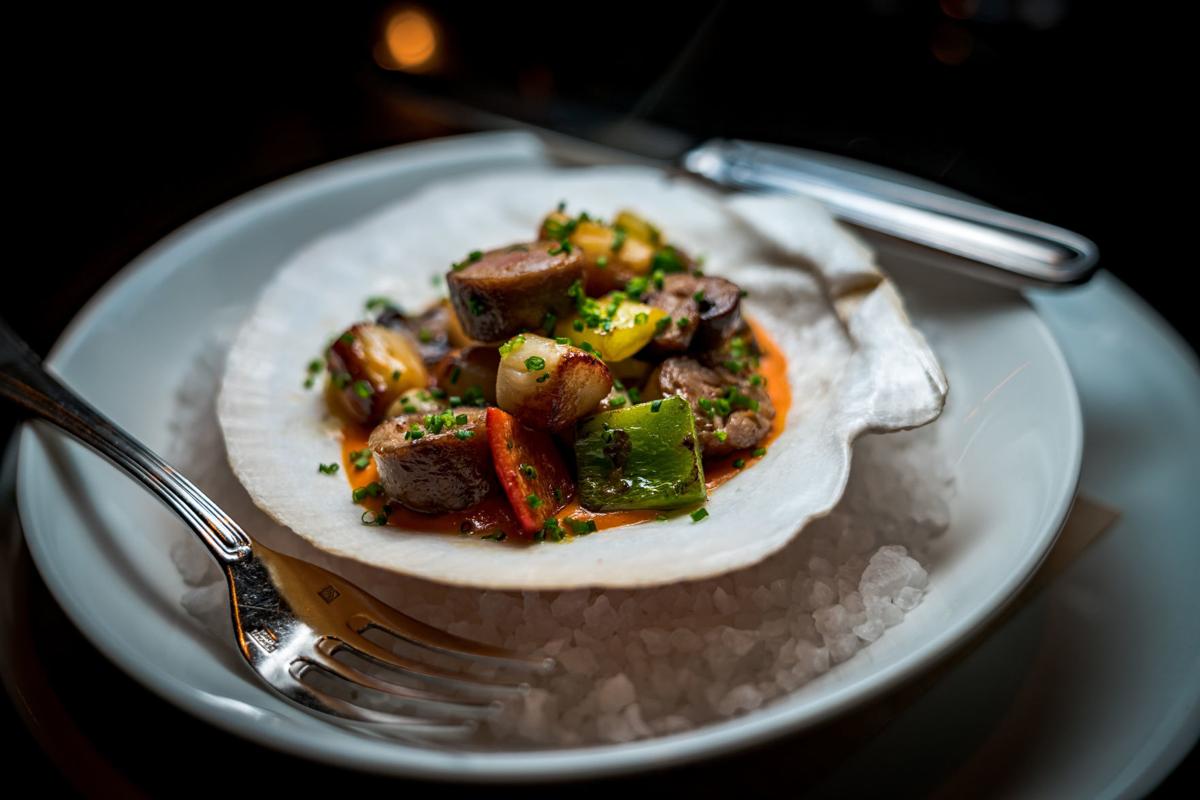 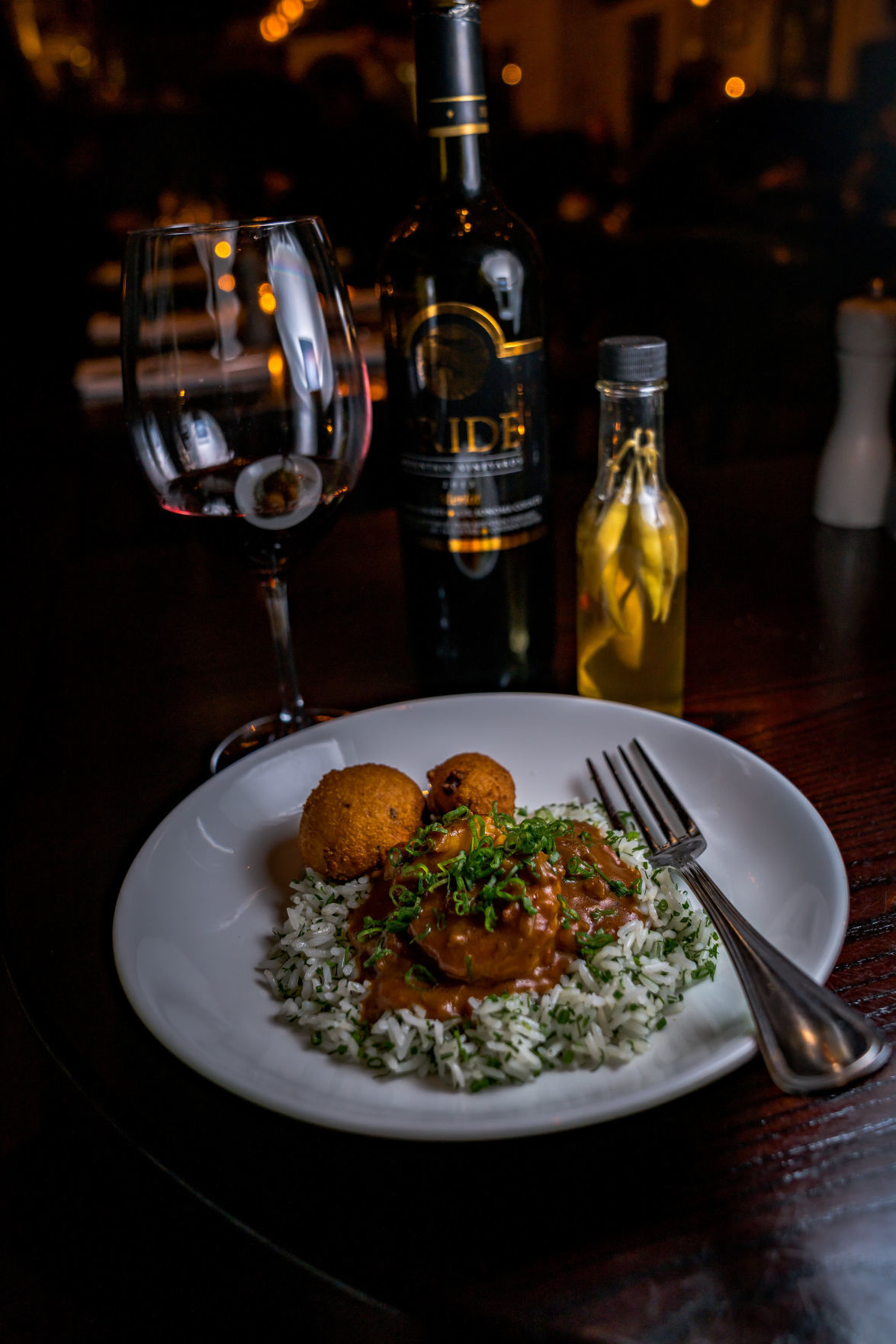 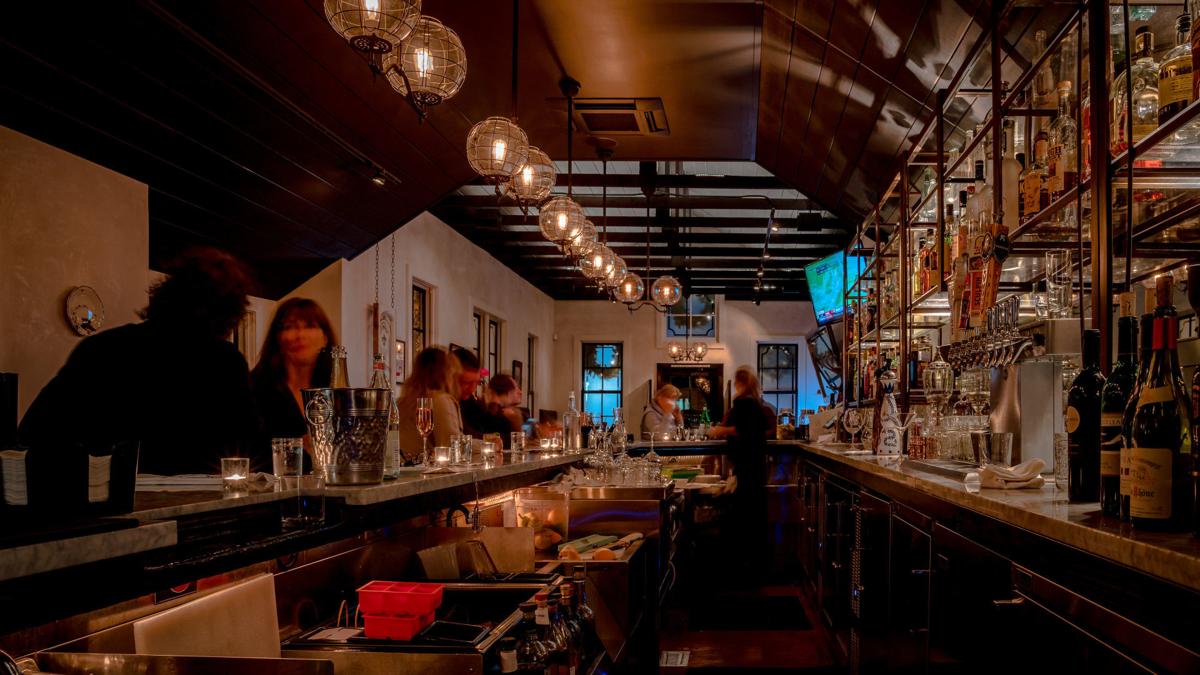 The interior of Evangeline restaurant in Calistoga.

One of the Napa Valley’s better restaurants — and a serious contender for best dining establishment in Calistoga — is now owned by its general manager, Sasan Nayeri.

In December 2017, the original owners, Brandon Sharp (former Solbar chef and now chef at the Carolina Inn in Chapel Hill, North Carolina) and the Simon Equity Partners (former owners of Solage), sold their interests to Nayeri. The new owner has kept the original crew and focus intact, including executive chef Gustavo Rios (Solbar, Bouchon, The Inn at Little Washington).

“I am excited that we’ve kept the team together and that we’ll be continuing on pretty much the same path — making excellent food and providing our guests with exceptional service,” Nayeri said. “We’ll all miss Brandon’s involvement, but given that Chef Rios worked with him for years and has been running the kitchen since our opening in 2014, we remain in good hands, and I am excited to watch the team continue to strive for excellence.”

“As much as I loved being a part of Evangeline, given that I now live and work on the East Coast and the Simons are no longer affiliated with the Napa Valley, either, it was just a natural progression (to sell Evangeline),” Sharp said. “I am just glad that the crew has stayed together because that is a truly unique collection of talent. Both Sasan and Goose (Rios’ nickname) really have a great command of the property; they understand the community and they also have a clear vision of where they want to go.”

Evangeline was the brainchild of Sharp, whose culinary proclivities led to Calistoga’s first Michelin star (at Solbar, which has been lost since his departure). Sharp’s food often had a Louisiana-focused, Southern flare, all set within a framework of French cuisine that mostly used locally sourced ingredients. The focus at Evangeline has shifted over the years, but the food still retains what Nayeri refers to as “a casual French bistro feel but with a Creole soul.”

As a child growing up in Isfahan, Iran, Nayeri always loved going to restaurants, so much so that when his mother learned he wanted to purchase Evangeline she exclaimed, “Good, now you can spend all your time at a restaurant.”

“I just really loved going out and experiencing the excitement and camaraderie,” Nayeri said. “What I knew even then was that eating out wasn’t just about filling up, it was about hospitality: relaxing with family and friends, being entertained a bit, having some fun after a long day.”

When Nayeri was 15 years old, his family moved from the Middle East to Colorado. When he came, he spoke only a little English and was one of only a few immigrants in his high school.

“When I got here it was a bit of a shock,” he said. “I remember once that there was a celebration for the Hotel Boulderado that was turning 100 years old, and I thought, ‘Are you kidding me? I used to cross the Khaju Bridge on my way to school that was over 800 years old.’ It was truly a new world for me, but now I consider Colorado as really the place I grew up.”

Nayeri started working in restaurants while he was in high school as a way to earn extra money, initially in the kitchen as a prep cook and pizza cook, but eventually he transitioned to the front of the house, first as busboy, then server, sommelier and even the general manager at Boulder’s Mateo by his early 20s. But after working a harvest in France and Italy, the 28-year-old decided that he needed to live and work in wine country. When he got back to the United States he applied for the general manager position at restaurant Terra in St. Helena.

Like Nayeri, Rios also immigrated to this country when he was a teenager, arriving without speaking much English and moving into a community that had little experience with people from other countries.

“I was born and raised in Ensenada, Baja California, but when I was 12 we moved to Gloucester, Virginia, on Chesapeake Bay,” Rios said. “I think we were the only Hispanics that lived there back then.”

Growing up on the coasts of both Mexico and the United States gave Rios an appreciation for seafood.

“Our entire family would get together a few times a month to eat and hang out,” Rios said. “We’d grill shrimp, oysters and lobsters and serve it with simple but fresh sauces. It sounds a little luxurious now, but it really wasn’t, it’s just that we had friends and family who fished for a living and we lived near the ocean.”

A sentiment that both Nayeri and Rios repeat often is how hospitality can bridge nearly any gap.

“Food is international — everyone eats,” Rios said. “It’s one of the reasons I love being in the restaurant business — it’s a place of common ground.”

“When I was growing up my mother would always cook more food than our family could eat,” Nayeri said. “That’s because someone would always just show up for dinner. It’s just something we expected and was normal. Everyone was welcome. It’s the same sort of hospitality that we hope to provide here at Evangeline.”

The menu is divided into seven sections: Chilled on Ice, Small, First, Cheese, Charcuterie, Mains and Complements (sides). Given the number of sections, one might expect the menu to be dauntingly large, but like most restaurants today, the menu has only a few options within each category, which allows the kitchen to be nimble while maintaining fresh offerings — which is especially important considering that roughly one-third of the menu items include seafood in their descriptions.

The menu changes seasonally, but snack items of Fried Pickles or Deviled Eggs with Pepper Jelly (each for $7) are omnipresent, as are Thick-cut Kennebec Potato Fries ($9), Grilled Gulf Shrimp with Cocktail Sauce ($16), Lump Blue Crab with Ravigote Sauce ($19), and entrees such as Blackened Shrimp Étouffée with Delta Rice and Hush Puppies ($27). Diners can find more familiar fare such as offerings of a creamy Artichoke, Spinach and Crab Dip served with warm sourdough bread or entrees of Roasted Mary’s Chicken and Black-pepper Gravy ($28), a Niman Ranch Beef Burger with Bacon- Onion Compote on a Brioche Bun ($19), and daily grilled fish options.

As Sharp highlighted, Rios’ culinary offerings speak to his training in classical French cuisine, which shows up in his execution, such as paper-thin slices of smoked salmon on a potato rösti ($12) — a sort of potato hash brown that Rios and crew craft into a patty of crunchy crust that protects a ludicrously creamy interior. Or the seared Nantucket bay scallops ($22) with savory roasted peppers, slices of tender spice pork sausage and slivers of sweet onions all served in a scallop shell, reminding me of the culinary equivalent of “The Birth of Venus” painting by Botticelli.

As a part of Evangeline’s evolution, for the last couple of years they’ve been offering special-event takeout options, such as the fried chicken and fixings that are popular during Calistoga’s weekly Concert in the Park summer series, or the Thanksgiving to go pick-up options for people who want to eat well but don’t have the time, space and skill to produce perfectly cooked poultry or make light and airy whipped potatoes.

“We are not sure if we’ll expand the offerings, but the feedback we’ve gotten over our takeout has been encouraging and we sell out, so who knows what might happen in the future,” Nayeri said.

Evangeline also holds special dinners that might celebrate a holiday (such as gumbo during Mardi Gras) and fried-chicken dinners throughout the year.

The future of Evangeline

What has not changed is the finely crafted food, innovative cocktails, eclectic wine list with both New and Old World offerings and the intimate indoor dining room and private patio that offer comfortable spaces for diners to enjoy and relax while being treated to non-fussy but attentive service.

“When I was growing up on the coast of Baja, I never really loved overly spicy food because at some point it can interfere with the natural flavors of the other ingredients,” Rios said.

“Goose is a true student of the classics and has a profound understanding of French cooking — his food is beautiful to both look at and also to eat,” Sharp said.

This is true to my experience, but I hope that both Nayeri and Rios continue to explore their own diverse and interesting backgrounds, incorporating not only just what works but also reaching deeper into what has inspired these two success stories to become who and what they are. Calistoga can be a challenging place for the innovative, and many of the food establishments often settle on what seems safe, but my hope is that Evangeline continues along its trajectory, up toward the future.

“For now we expect everything to stay just about the same,” Nayeri said. “We’ll continue to refine the menu and the service, but I think we are in a really good spot and I am grateful for the support of what is a really great community.”

Owner Sasan Nayeri describes Calistoga's Evangeline restaurant, seen at left in the photo, as having “a casual French bistro feel but with a Creole soul.”

The interior of Evangeline restaurant in Calistoga.