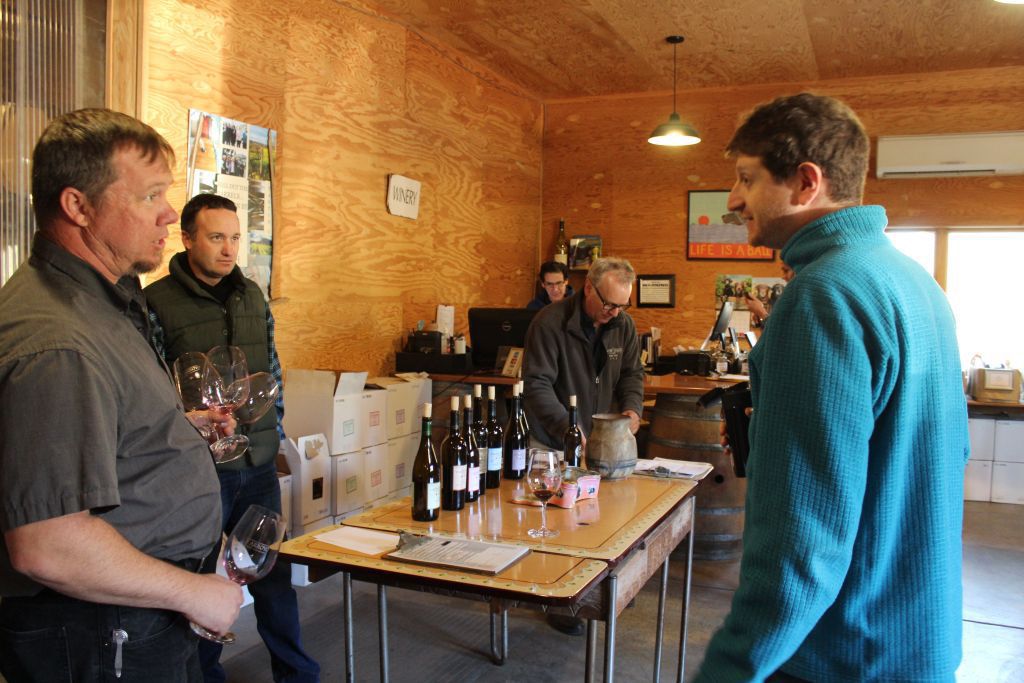 Matt Moye, second from left, co-proprietor of Vincent Arroyo Winery, looks on as a guest and wine educator interact in the winery's no-frills tasting room. 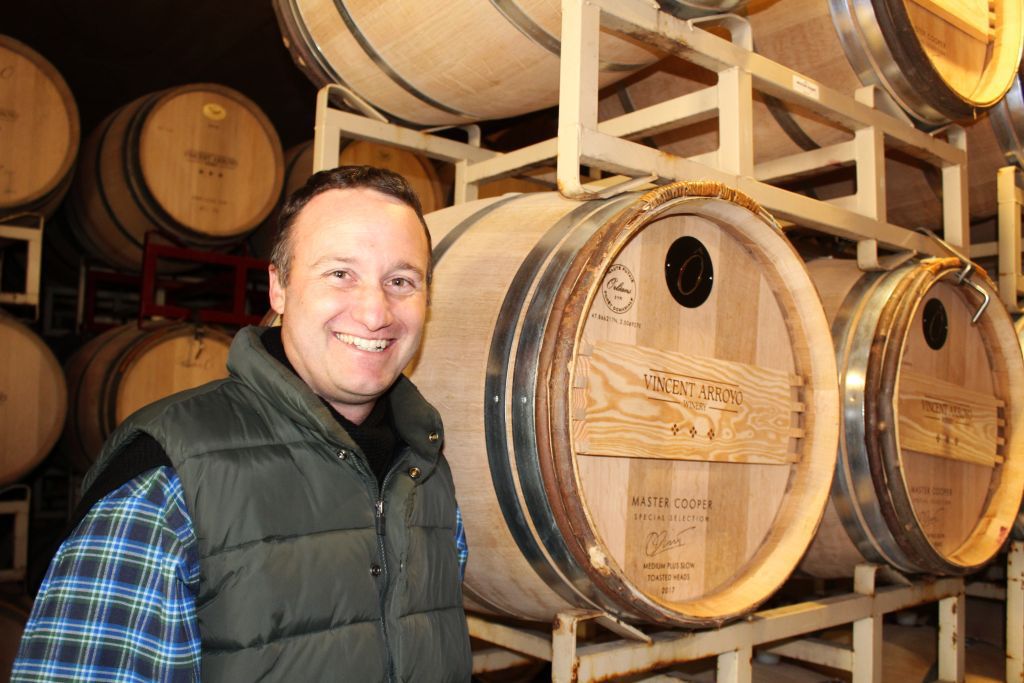 Matt Moye stands next to barrels that are made of trees in an area of France where he has selected specific trees to be made into barrels for the Vincent Arroyo Winery program. In the top left section of the barrel are the coordinates of where the tree for the wood that went into that particular barrel was grown. 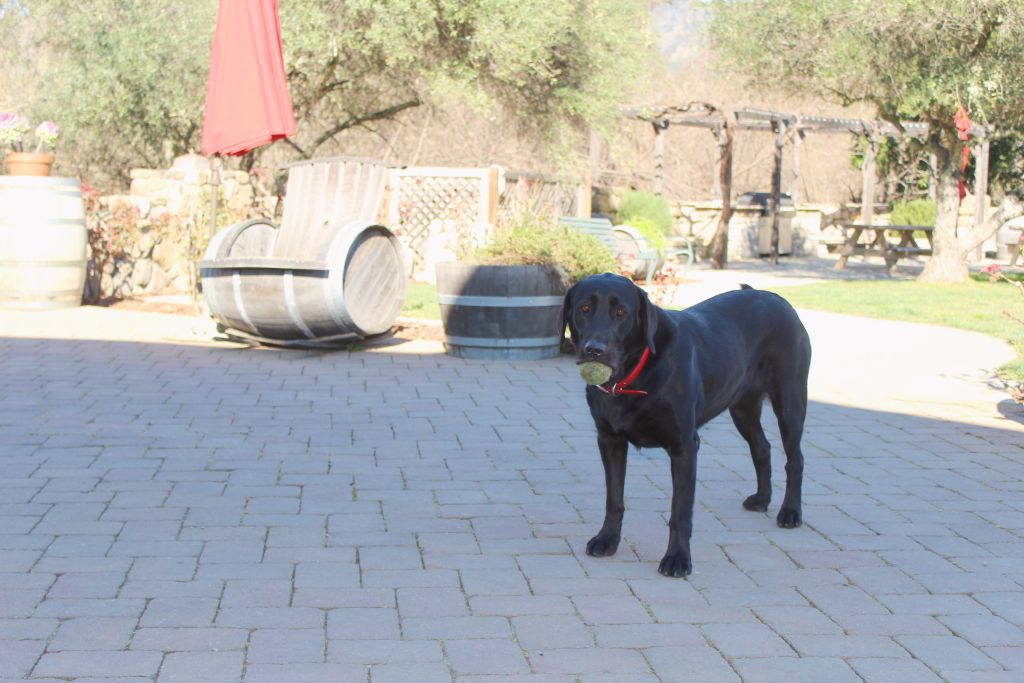 Rosie, one of the friendly dogs at Vincent Arroyo Winery, shows off one of her favorite balls on the patio outside the tasting room.

Vincent Arroyo Winery is not your typical Napa Valley winery of late. It is a throwback to the simpler beginnings of wine in the region, but with a modern-day twist.

Simple plywood walls, wine barrels and a retro table standing welcomingly in the room provide the décor in the winery’s tasting room. The winery dogs – one of whom is a ball-hog — provide the entertainment. And longtime, knowledgeable tasting room employees provide the education.

What’s most unusual about Vincent Arroyo Winery is the tasting room fee. There isn’t one, said Matt Moye almost sheepishly.

Moye is the co-proprietor along with his wife, Adrian, who is the daughter of the founder Vincent Arroyo. The couple, who met in law school, took over ownership in 2012. Moye said he practiced law for a while, but shuddered at the need for “billable hours” and decided wine was more his style. His wife, coming from that background, agreed, and now they run the winery together hoping to prepare it for the next generation – one of their three boys.

While other Wine Country wineries escalate tasting fees, or “experiences,” to $50 for a standard tasting, or more for such things as “reserve” tastings, and even higher for vineyard or cellar tours or food pairings, Vincent Arroyo holds out — providing a free experience tasting Napa Valley wine to keep things affordable and approachable.

Forget “perceived value” – the concept that if you pay a lot for something, it’s got to be great, and if you pay little to nothing, it’s not going to be good – the wines at Vincent Arroyo Winery are coming from the same exemplary terroir as other wines whose grapes are grown in Calistoga. Some of the juice from Vincent Arroyo Winery is sold to other Napa Valley wineries, Moye said.

Plus, public perception and reviews are responsible for an honor Moye said he hadn’t known was taking place behind the scenes.

“We didn’t even know about (the review) until a customer brought it to us,” Moye said.

Beyond the “authentic experience” of a family winery that millennials seek, Moye has found something to go beyond the “farm to table” concept, with a French barrel wood-to-bottle concept that brings the barrel project to the intersection of 200-year-old French oak trees with 21st-century technology.

Moye went to France last March to select the trees that would eventually become barrels in their wine program.

“The way barrels are made, they’re usually seasoned for 36 months. So, they cut the wood into staves and they put them out in the elements, outside … to age … to try to get the greenness out.” He picked out the wood, and it’s the same area as where his current barrels are from.

“I have wood aging in France now for another two years, and then that wood will come over and we’ll make the barrels,” he said.

But what really brings it home is the ability to incorporate the old with the new. The 12 barrels they purchase have the coordinates of where they were grown stamped on the barrels.

“Now, here’s the coordinates of that tree, where this wood came from,” he said, tapping on the barrel that holds the winery’s Rattlesnake cabernet.

“What I’m really excited about is I’m going to barrel taste with customers on this wine, and I’m going to be able to pull on my phone – Google Earth – and we can see where this tree was harvested, and I can point across the way and show where those grapes came from, and it’s all here. So, we’ve now taken it a step further, and taken it from the wood all the way into the bottle.”

Sales at Vincent Arroyo have always been direct to consumer, and their thousands of loyal customers look forward every year to their “futures” sale, Moye said, where the winery offers a 50 percent discount on purchases of wines that are still in barrel and haven’t been released yet.

It’s a sales tactic that is a win-win for wine collectors and wineries alike. The upfront sale of wines that haven’t yet been bottled or released gives a winery money to work with sooner rather than later, and it gives consumers a deep discount. It takes some faith on the consumer side to trust that the wine they taste in barrel will continue to taste to their liking when the wine is finally bottled, but it’s been a successful business model for the winery for some time, Moye said.

Not using distributors is another way the winery keeps cost down, he said.

“We’re not trying to be someone we’re not,” Moye said. “We’re farmers first; winemakers second.”

Farmers who are also winemakers are the backbone of the Napa Valley, and it’s a philosophy employed by those who consider themselves caretakers of the land, rather than land- or winery-owners. They are always searching for best practices and experimenting, but as any farmer knows, Mother Nature likes to be in charge.

For example, Vincent Arroyo Winery has employed a variety of farming practices with a particular block of Malbec, one year getting a good crop, the next year, not so much. But the Malbec vines across the street, which are on different clones and grown in different soil types, produce more consistently; examples of what makes farming, and wine, so intriguing.

They are proud of their longstanding local connection to Calistoga, Moye said, pointing to the vineyard across the way from the Greenwood Avenue property that they lease from the Enderlin family. (Some may recognize the Enderlin name through Calistoga natives Roy Dean Enderlin, who was born in the Calistoga Hospital and died this January at the age of 92, or his son Dean Enderlin who portrays Calistoga founder Sam Brannan at events and historical reenactments.)

Vincent Arroyo Winery also produces a single-vineyard petite sirah and tempranillo from the Rattlesnake property, Moye said, and a single-vineyard petite sirah from the Greenwood Avenue property. Sangiovese, merlot and syrah are grown there, too. They make olive oil, from Calistoga – one from their estate and another from their neighbors. A balsamic vinegar is also from their cabernet sauvignon grapes, something Moye said he has a little trouble swallowing because they are “intentionally turning good wine into vinegar.”

Wines are sometimes named for the winery pets, such as “Nameless,” their cat. She makes a cabernet sauvignon-tempranillo blend. Nameless the cat arrived at the winery as one of six siblings and their mom.

“They were dumped on our driveway and they were feral, and we had to catch them by trap to be neutered and spayed, and the coyotes got all but her,” Moye said. She didn’t have a name, she was just “kitty.” At about the same time they were making a wine blend with “no name” on the barrel.

She’s been there for about 14 years now, so she’s an older cat. She is joined in “making wine” by her canine sisters: Rosie the dog makes a rose, and a chocolate lab named Bodega makes a big Bordeaux blend.

Matt and Adrian got married in Bodega, and the chocolate lab was a wedding gift, so that — coupled with the fact that the Arroyo family is Spanish and in Spain wineries are called “bodegas” — is how the dog came to be named.

The winery has been approved for increased production and visitation, Moye said, but they “probably won’t ever reach” what he asked for in terms of production or visitation. He is hoping that at least one of their children will be interested in taking over the family business and asked for the rights from the county so that the future generation would have the option of expansion.

“I don’t think I’ll use it, but I always try to be forward-looking in terms of the next generation, and that’s what Vince did,” he said. “We’re a family winery, we don’t want to sell out to a corporate-whoever. And we’re fortunate we have a loyal following that we can do that. … We thank our lucky stars every night that we have our customers that we do.”

Matt Moye, second from left, co-proprietor of Vincent Arroyo Winery, looks on as a guest and wine educator interact in the winery's no-frills tasting room.

Matt Moye stands next to barrels that are made of trees in an area of France where he has selected specific trees to be made into barrels for the Vincent Arroyo Winery program. In the top left section of the barrel are the coordinates of where the tree for the wood that went into that particular barrel was grown.

Rosie, one of the friendly dogs at Vincent Arroyo Winery, shows off one of her favorite balls on the patio outside the tasting room.