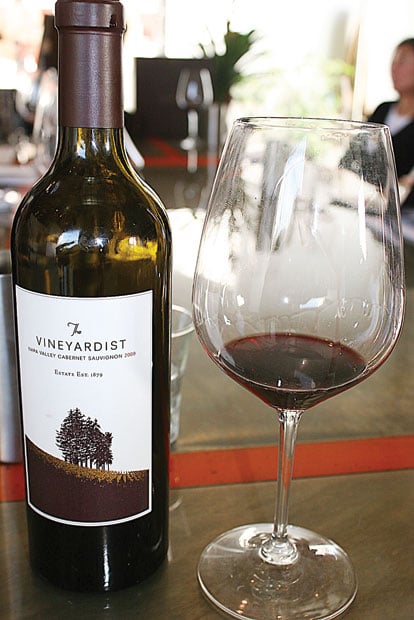 Winemaker Mark Herold told Dirk Fulton and Becky Kukkola to wait for years until he was ready to release the first vintage of their estate cabernet sauvignon, the 2009 The Vineyardist. David Stoneberg photos 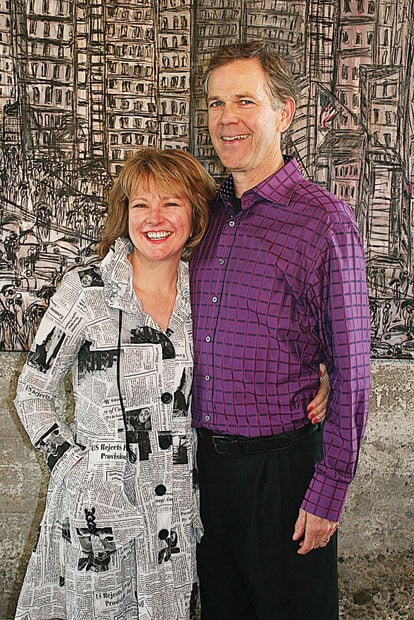 It took Dirk Fulton and Becky Kukkola about 10 years to find a suitable piece of property in the Napa Valley and another 12 years to release their first wine. The 2009 vintage of The Vineyardist was released in mid-February 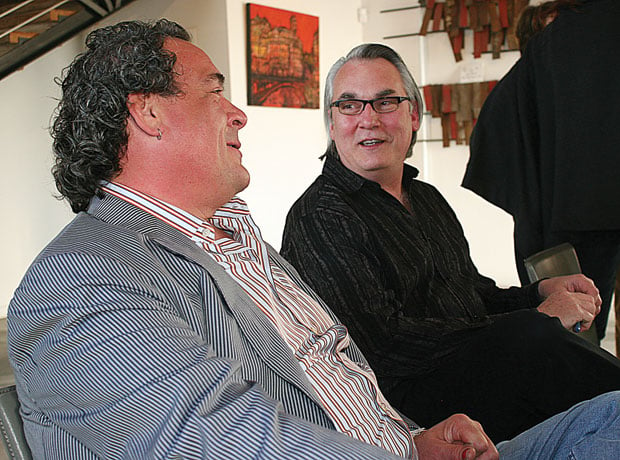 Winemaker Mark Herold and proprietor David Stevens share a laugh during a release party at Stevens’ 750 Wines in St. Helena. Herold was one of the original Napa “garage” winemakers when he created Merus Cabernet Sauvignon in 1998.

Earlier this spring, Dirk Fulton and Becky Kukkola released their first wine, the 2009 vintage of The Vineyardist. It was the realization of a dream, one that stretches back more than 20 years.

Fulton and Kukkola told their story during a release party at St. Helena’s 750 Wines, hosted by proprietors David and Monica Stevens. Fulton began the story: “Becky and I have always loved the valley. Her family was always involved historically with agriculture and we’ve been coming here for years. When we could afford it, when I got out of law school, we were able to buy a small house in St. Helena on about a tenth of an acre.”

In the following years, the two went to Europe and toured some of the great food and wine estates. After returning, Fulton said the two had a dream: “Let’s create this great, world-class wine estate in the Napa Valley.”

In the early 1990s, Fulton and Kukkola started looking for Napa Valley property. It took them 10 years to find an 80-acre parcel on Diamond Mountain that was called the Lazy Susan Ranch.

“We got to preview it before it hit the market and we fell in love with it,” Fulton said. The land “had the right fit for us,” Fulton said; it had the right soul, soil, history, ambiance and exposures for growing grapes.

How did they know this? “If we were serious about a property, we had a company evaluate the soils and we got to know Jim Barbour. We would have Jim up to kick the tires on the property,” Fulton said.

Additionally, he added, “I knew when Becky saw the kitchen of the restored farmhouse and learned about the organic herb ranch, we were well on our way” to finding a top-notch wine estate.

About the herbs: the property’s former owner Linda-Marie Bauer had run a thriving commercial herb business with nearly 200 different varieties. Today, Kukkola is in charge of the organically-grown products, which are sold locally.

When Fulton and Kukkola bought the property, they inherited a 5-inch binder of the history of the land’s first owner, Lorenz Petersen, a Dutch shipbuilder from San Francisco. He and his wife, Maria, had all of their savings in banks in San Francisco and lost it all, except for $2,000 he had not deposited, following the Panic of 1873. They spent the $2,000 to buy the Diamond Mountain land in 1879.

Petersen named it “Calarcadia,” (California Paradise), began to clear it and create a self-sustaining farm to produce crops year-round. He also planted zinfandel, carignon, alicante, burgher and malvasia vines and harvested his first crop in 1884.

The grapes were put into 50-pound lug boxes, pressed and put into 2,000 gallon redwood tanks for aging. The following spring, wine merchants from San Francisco came to the estate, to the farmhouse Petersen built in 1879, and sampled the wines. They bought the wine in 150-gallon casks that were shipped to San Francisco by rail before the wine was bottled and sold.

Fast forward 120 years. When Fulton and Kukkola bought the property, there was a small quarter-acre block of 35-year-old St. George rootstock cabernet sauvignon vines behind the house. Fulton said he thought he would learn how it was done, tend the vineyard, harvest the grapes and become a winemaker. He went to UC Davis, took 20 units of enology classes and enjoyed it. “I thought I was a smart guy, but there’s more to this than meets the eye,” he said.

Fulton said he tended his vineyard and made wine for one or two years, but realized he would never know enough. “I quickly learned that I needed a great vineyard manager and needed a great winemaker. That was a happy learning experience,” he said.

Fulton said, “With the property’s history, we were very interested in reviving the wine component of the estate, so we brought Barbour on board in 2002.” Barbour planted two blocks of cabernet sauvignon vines (clone 7 and clone 337) on the steep, rocky hillside, one at 1,200 feet and the other at 900 feet. Currently, there are six acres planted in four vineyards on the 80-acre estate.

The Calistoga couple began looking for a winemaker and “became intrigued with a guy named Mark Herold. We didn’t know Mark, but we were following him in the press and as Becky and I got deeper into it, we learned he was the wine personality of the year in 2005. We love his wines, tasted his Merus, we got to meet Mark, we hit it off and had a wonderful time.”

Fulton said he and Kukkola had a lot of fun going to Herold’s garage and tasting through the barrels of wine there. Herold had produced 10 vintages of Merus Cabernet Sauvignon with his wife, Erika Gottl, in his Napa garage. When the couple separated in 2007, they sold the business to William Foley of Foley Wine Group. Within a few months, Foley had bought an historic ranch in St. Helena, a famed “ghost winery” and built a winery and 7,000 square feet of caves. Since it is so small, it is closed to the general public. In 2008, Foley replaced Harold as winemaker with Paul Hobbs consulting and Camille Benitah as associate winemaker.

Today, Herold continues to consult for several clients and makes his own wines, but not a cabernet because of a non-compete clause in the sale contract. He said he will soon make a cabernet sauvignon under his own label, as soon as the clause expires.

For Fulton and Kukkola, the main ingredient they needed was patience. “We went into this project really committed to do the very best,” Fulton said. They wished to produce the best possible cabernet sauvignon from their historic estate.

“We were able to, with some chagrin, be patient and wait until the wine was ready to meet our exacting standards. I really want to praise Mark publicly, because he held our feet to the fire and told us to wait.” So, they waited for five years, harvest after harvest, until one day Fulton got a call from the legendary “Napa garage” winemaker. “Dirk, I nailed it this vintage, come taste,” Herold said.

How did that happen? Herold said, “I think it has to do with the vine system achieving a sense of balance, if you will. I’ve seen some vines in certain vineyards explode with flavor and structure right from the start and some take a certain amount of time. It’s all about the rootstock and the shoot material finding a sense of balance. This site is so challenging because of the rocks, the slope and the exposure. The first three years there were some very awkward wines and I didn’t feel they had the elegance or balance that Becky and Dirk wanted. I felt that it shouldn’t go into a bottle.”

During the planting and maturing of the vines, the work on the estate didn’t stop. Along the way, Michael McDermott was hired to be part of the team, to help with branding. Three years ago, Fulton began to apply for the permits necessary to build a winery, the first one on the site since Prohibition.

Soon, Fulton and Kukkola will break ground on a 3,500-square-foot winery and are planning to use it for fermentation this fall. The winery will look like an old barn from the outside and will be modern with state-of-the-art equipment on the inside. It will be a two-year project.

Even with mature vines, a thriving organic herb farm, restored farmhouse and new winery building, the dream is not yet fulfilled. This grand estate was meant to be a multi-generational project, one that could be handed down to children and grandchildren. Fulton said, “If we’re lucky, maybe one of our three children will have some interest,” but, he added, “that’s hard to predict.”

Winemaker Mark Herold told Dirk Fulton and Becky Kukkola to wait for years until he was ready to release the first vintage of their estate cabernet sauvignon, the 2009 The Vineyardist. David Stoneberg photos

It took Dirk Fulton and Becky Kukkola about 10 years to find a suitable piece of property in the Napa Valley and another 12 years to release their first wine. The 2009 vintage of The Vineyardist was released in mid-February

Winemaker Mark Herold and proprietor David Stevens share a laugh during a release party at Stevens’ 750 Wines in St. Helena. Herold was one of the original Napa “garage” winemakers when he created Merus Cabernet Sauvignon in 1998.