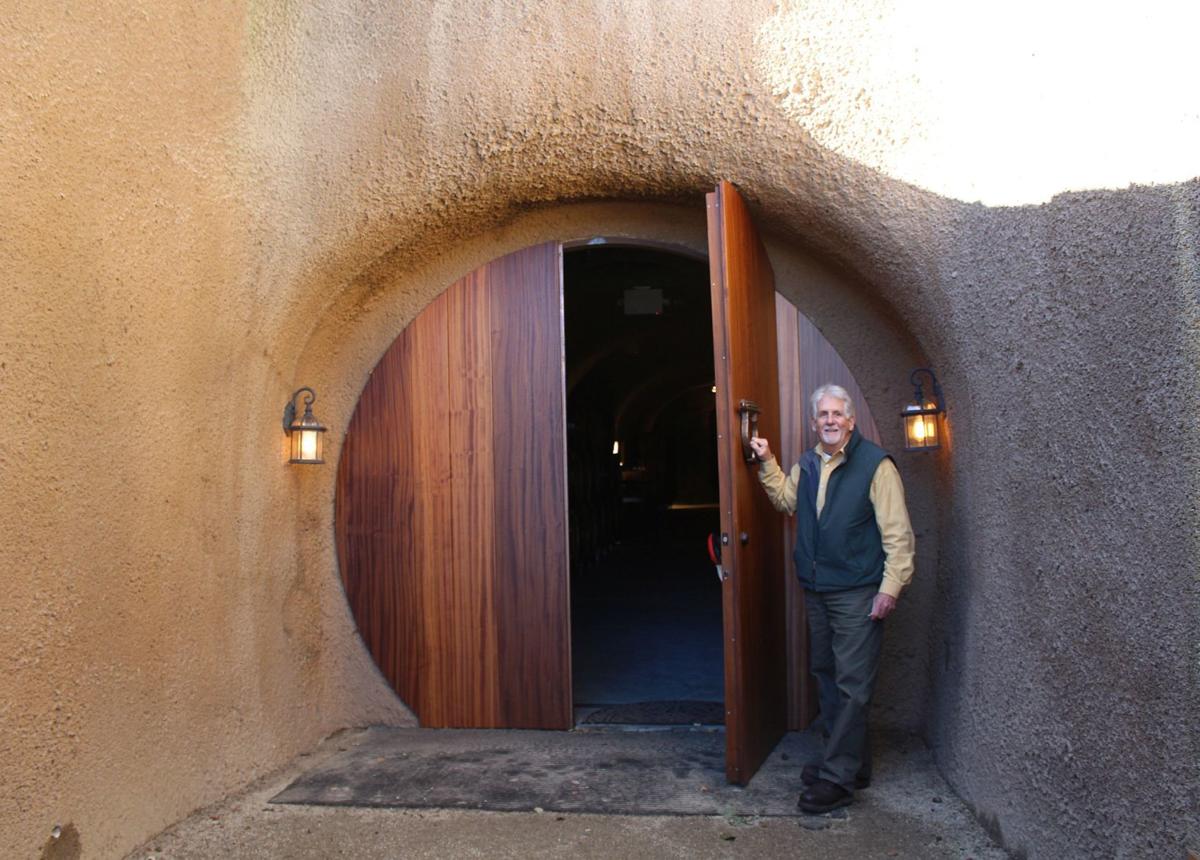 Winemaker Tom Eddy at the entrance to his "Hobbit" wine cave. The door is made from African mahogany. 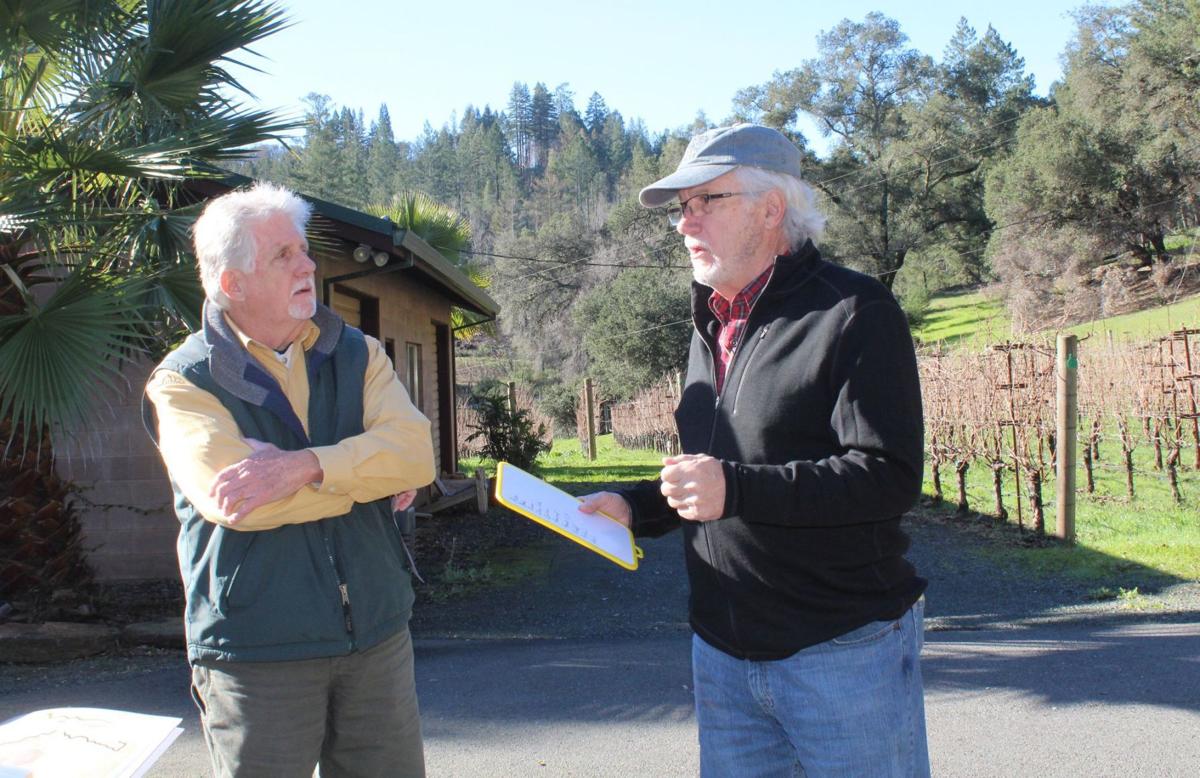 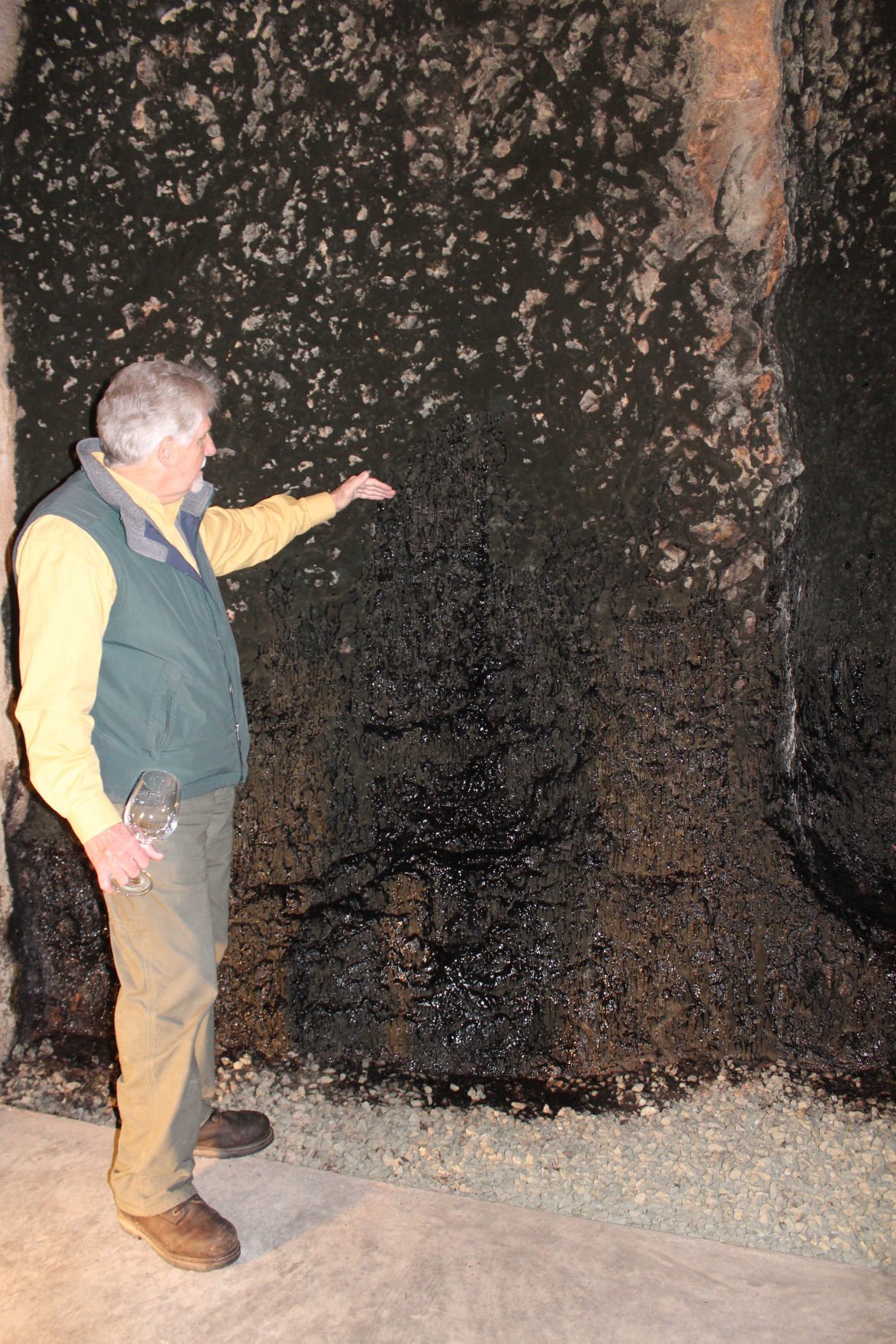 Tom Eddy points to the 'weeping wall' in his wine cave. Due to the porous nature of the volcanic bedrock rainwater seeps through.

Winemaker Tom Eddy at the entrance to his "Hobbit" wine cave. The door is made from African mahogany.

Tom Eddy points to the 'weeping wall' in his wine cave. Due to the porous nature of the volcanic bedrock rainwater seeps through.

Those who know wine, know that the quality is determined long before it sits in the barrel aging.

All great wine starts with great soil, says Geologist David Howell, whose books have had an impact on more than one winemaker in the Napa Valley.

“He knows more about the Napa Valley than most winemakers,” said Tom Eddy, Calistoga winemaker and namesake winery owner. Eddy said Howell’s book is the most influential thing he’s read, and changed the way he makes wine. “This got my attention.”

Howell spent 30 years working for the U.S. Geological Survey in Menlo Park and during that time, he studied the geological make-up of the Napa Valley. Recently, he took a group of wine media people on a tour of Calistoga wineries that included Tom Eddy Winery.

The winery is located uphill on 22 acres at the northernmost part of Calistoga, in the shadow of Mount St. Helena. The property is surrounded by Sonoma County and a 900-acre land trust on three sides that allows for no development. On that land, the only thing that’s allowed to be cultivated on the land is Black Angus cows.

In describing the land here, Howell tries to simplify the complex interaction of environment, land, and agriculture and in doing so describes the land here as “residual soil.”

Residual soil is difficult to excavate due to the volcanic bedrock. As a result, Eddy only has one acre, out of what he originally thought might be 10, planted with vines. Large rocks cast aside on the landscape lay in evidence to previous excavating attempts.

There is so much bedrock the backhoe goes “clunk” when it hits the ground, Eddy said.

Yet, land of this type is also some of the most highly prized land for growing wine grapes, Howell said, not just here, but around the world.

“It’s highly prized for any vines,” he said.

Vineyards with residual soil include Côte Rôtie (a prestigious red-wine appellation at the northern tip of France’s Rhône Valley wine region) and Burgess Cellars at Howell Mountain that Howell said used dynamite to create holes in the land.

“The (ancient) Romans did it without bulldozers and they had great wine,” Eddy said.

There is very often only a thin veneer of 1 to 6 inches of residual soil, the rest is bedrock. “There’s not a lot of vigor,” Howell said, meaning the soil doesn’t hold much moisture.

The roots of the plants can however reach down into the cracks in the bedrock. There is good water drainage, and the vines will struggle to grow, producing more intense flavor in the smaller winegrapes.

With a large grape and grape clusters, the flavor is too diluted, and Eddy focuses on quality, he said.

Kerry’s vineyard at Eddy’s winery produces two tons per acre, which is not a lot compared to the 3-½ to four tons average in the Napa Valley, Howell said.

Soil that is downhill, on the Valley floor, by comparison, is rich in debris that has been carried down from the surrounding mountains, and grows the most vigorous vines and grapes.

Winemakers don’t like to hear it, but it’s some of the best soil for growing potatoes and strawberries, Howell said, adding, in the Central Valley, where these crops are grown, the average is 7 to 8 tons per acre.

“Personally, I’m a believer in mountain-grown Cabernet due to what Dave is saying, compared to on the floor (of the Valley) where they are producing tons and tons,” Eddy said.

Despite the rocky landscape Eddy built a wine cave on the property. A special excavator (think Jules Verne) was required to bore through the bedrock.

The biggest problem, however, was disposing of the debris, which Napa Country requires to be hauled to a certified removal site, at considerable cost.

Eddy was spared the roughly $250,000 cost, however. As it turns out his friend John Merchant, who owns Indian Springs Resort, had a large hole on his property.

“When we drilled our cave, we were allowed by the owner of Indian Springs to deposit our beautiful rocks — cave — spoils, into the hole created by Indian Springs during their excavation process for expansion several years ago. The cave spoils were residual bedrock materials called Andesite, or volcanic,” he said.

At 4,000-square feet the cave is small by Napa Valley standards, but Eddy spent the extra money to make it a dry cave, lined with waterproofing material. The cave’s temperature also remains at a steady 59 degrees.

Eddy’s wife, Kerry, is a sculptor, and special niches were also carved to showcase some of her works.

Wine here ages in French Oak barrels. Tom Eddy Winery puts out about 4,000 cases of wine per year, including Cabernet Sauvignon, a New Zealand wine and the new Grenache Blanc from Napa, which Eddy says is “very unusual.”

Eddy sources Cabernet from Napa Valley vineyards including Knighton Vineyards, in the Palisades Range (Calistoga AVA), Greeg Mountain in the Pritchard Hill area, Stagecoach, in the Atlas Peak region, and their own Kerry’s Vineyard.

A graduate of U.C. Davis, Eddy has been a winemaker for 46 years. Back in the 1980s, Eddy was making wine in Napa Valley for Christian Brothers. The best soil was thought to be deep in the riverbed, where vines flourished.

“We couldn’t stop the plants from growing, but I didn’t like the quality,” Eddy said.

Christian Brothers gave him a blank check to buy smaller vineyards and experiment with different soil types, and the rest is history.