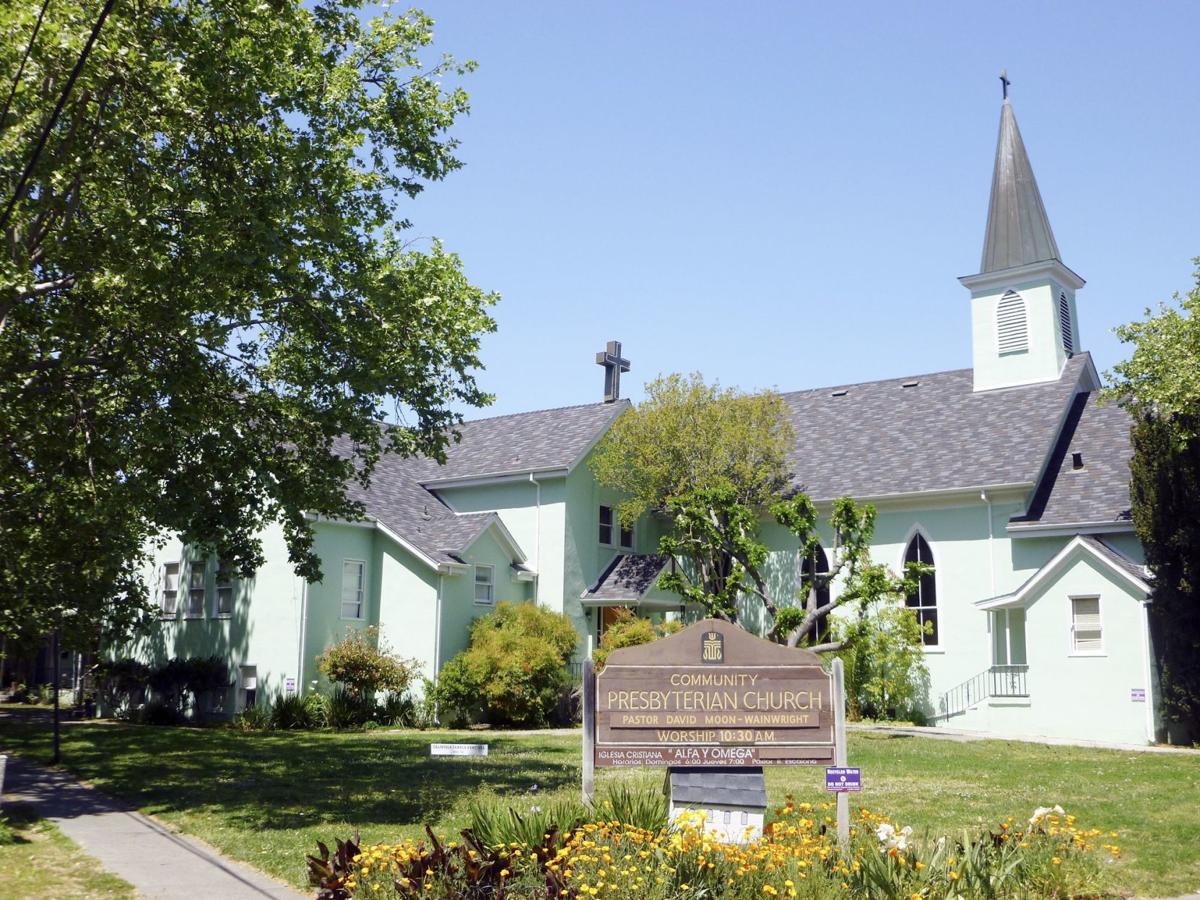 Calistoga's  Community Presbyterian Church, commonly called the Green Church, is located at Third and Washington streets. After sitting empty for several years, the church will be renovated into a community center. 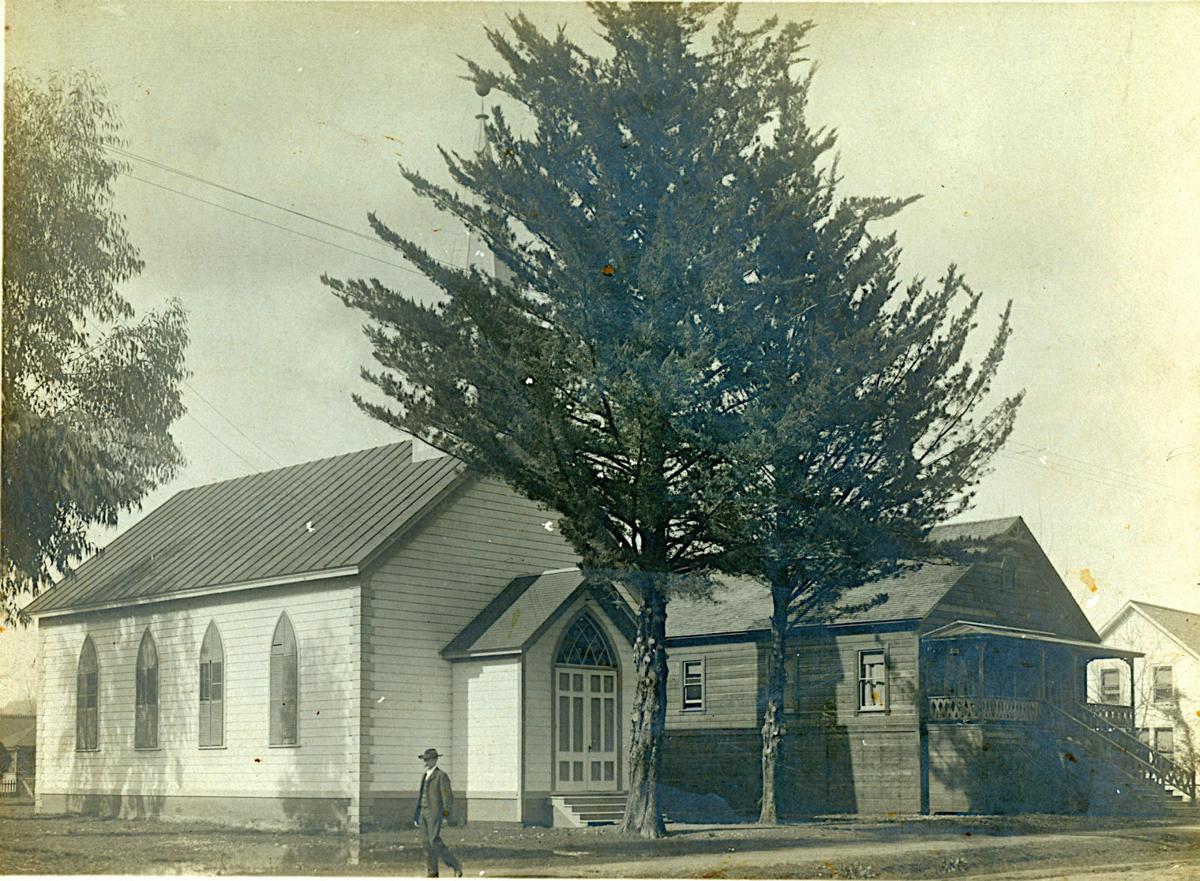 In the 1940s the Presbyterian Community Church was a federated Presbyterian and Methodist church. The "Green Church" wasn't green back then, and it was farther north on its lot in Calistoga. A decade later a plane crashed into the second story on the Washington Street side.

Of all of Calistoga’s historic buildings, perhaps there are none with the particular charm of the “Green Church” at the corner of Washington and Berry streets.

Painted the color of pistachio ice cream, the Presbyterian Community Church of Calistoga was constructed in the late 1870s and has long served as home not only to Calistoga’s Presbyterian congregation, but also to community groups, offering meeting space to the Girl Scouts, the Rotary Club, Bennett Valley 4-H, Alcoholics Anonymous, ESL, and other continuing education classes and programs. But the passage of time has left the church in disrepair, and it was red-tagged by the city’s building inspector a few years ago, leaving much of its three stories unstable and unusable.

Now, a group of civic leaders has pledged to breathe new life into the Green Church so that it can continue to offer public service to the community as the Brannan Community Center, a 501c3 nonprofit organization. According to its mission statement, “The Brannan Center’s vision is to serve as a multi-purpose community resource for civic, educational, and nonprofit organizations, and to provide a venue for musical and theatrical performances. The Center serves as a model of fiscal and civic responsibility, strengthening cross-cultural integration and a vibrant, healthy community.”

The name Brannan is a nod to Sam Brannan, Calistoga’s founder.

Serendipity at workEd Kozel, a Calistoga resident and member of the Center’s board of directors, said the project evolved as the brainchild of two groups of Calistoga residents concerned about the church’s decay: members of the local Rotary Club, especially Jim Barnes, who is president of the Center; Dick and Edie Englehard, also on the organization’s board; and others including Kozel, his wife Sara; and architect and Calistoga Planning Commission Vice-Chair Tim Wilkes, who is vice president of the Center.

Said Kozel, “My wife and I were always dismayed that Calistoga has no performing arts venue. We looked at the fairgrounds, but that was a no-go. At the same time, others were trying to find a way to restore the Green Church to its long-term role of continuing to provide public service to Calistoga and the Upper Valley community. It really was a case of serendipity.”

Over the course of last summer, the group came together and held organized discussions about the fate of the church. Until March of this year, just before the shelter-in-place order was issued, the Green Church was still used for AA and ESL meetings, and by the Presbyterian congregation, which had dwindled to only about 10 congregants, according to Kozel. The congregation was also no longer able to maintain the upkeep of the church. So, the Center’s board of directors signed a 50-year lease with the Presbyterian congregation — governed by the Presbytery of the Redwoods in Napa — with the option to renew as long as the church, as a tenant, has the right to continue services once the transformation to The Brannan Center is complete.

Calistoga’s historyThe Green Church sanctuary was erected in 1871 and originally had close ties to St. Helena’s Presbyterian congregation. Over the years, the church was moved twice to make room for improvements. For some time, Calistoga’s Methodist and Presbyterian congregations were conjoined as a federated church until 1956. After the church’s last move to its current location, the social hall and second story were added, and stucco was applied to its exterior to tie the sanctuary and the social hall together.

According to church records, in the 1950s an airplane approaching the Calistoga Glider Port crashed into the building’s second story. Mercifully, the pilot survived and the damage was repaired.

RenovationsWhile the Brannan Center group plans to renovate the church completely, the structure itself will remain intact.

Kozel said the renovation of the church will include converting the sanctuary and main hall into a performance space and creating a community hall that can seat anywhere from 120 to 130 people to be used by high school, theater, and other community groups. There is an existing commercial kitchen on the lower floor of the church that will also be renovated so it can be used for catering. The church’s restrooms will be upgraded, and offices and conference space will be added as well.

As a nonprofit organization, no city money will be needed for the renovations. Kozel admitted, however, that the Brannan Center most likely will not be painted green.

A local focus on the arts“We want to make Brannan Center a venue where the local community can schedule events like wedding receptions, quinceañeras, and other celebrations and fundraisers without breaking the bank,” Kozel said. The Center will be a place to meet for community organizations like the Boy Scouts, after-school groups, and even Zumba classes along with ESL classes and AA meetings.

“Because my wife and I have strong interest in the performing arts, we plan to make all theater, music, and dance performances free to any Calistoga youth under the age of 18 so that our local students have more exposure to the arts,” he said.

The Brannan Center board is working with local construction contractor Paul Coates, also chair of the Planning Commission, who conducted a complete structural analysis of the Green Church and reported that the structure and “bones” of the facility are excellent. The Brannan Center board has a memorandum of understanding with the City of Calistoga and has submitted planning documents. Kozel expects it will be at least 30 months before the Brannan Center will be complete. The project’s initial funding comes from the Presbyterian church and a donation by a local Calistoga family.

“Our board is a magical mix of personalities and skills that including fundraising, architecture, development bound by a common interest to continue this historic building’s mission of public service.”

For a small church — the congregation stands at about 30 regular members — St. Luke’s Episcopal Church’s reach into the community is extensive.

Celebrate Holy Week while sheltering at home with these options.

Mexican Independence Day was celebrated at Our Lady of Perpetual Help on Sunday, in honor of Latinx (a gender-neutral term for Latin American)…

According to recent reports, the Easter Sunday bombings in Sri Lanka killed more than 300 people, and injured 500 more, as half a dozen coordi…

CALISTOGA-- Virginia Dooley, a petite woman with lovely white gray hair and a cheery smile, welcomed me inside her cozy California bungalow on…

Calistoga's  Community Presbyterian Church, commonly called the Green Church, is located at Third and Washington streets. After sitting empty for several years, the church will be renovated into a community center.

In the 1940s the Presbyterian Community Church was a federated Presbyterian and Methodist church. The "Green Church" wasn't green back then, and it was farther north on its lot in Calistoga. A decade later a plane crashed into the second story on the Washington Street side.