Phil Murphy, center in red shirt, said the St. Helena parlor of the Native Sons of the Golden West has about 160 members and about 90 showed up for the group's annual car show, coordinated by Nick Coy Sr. 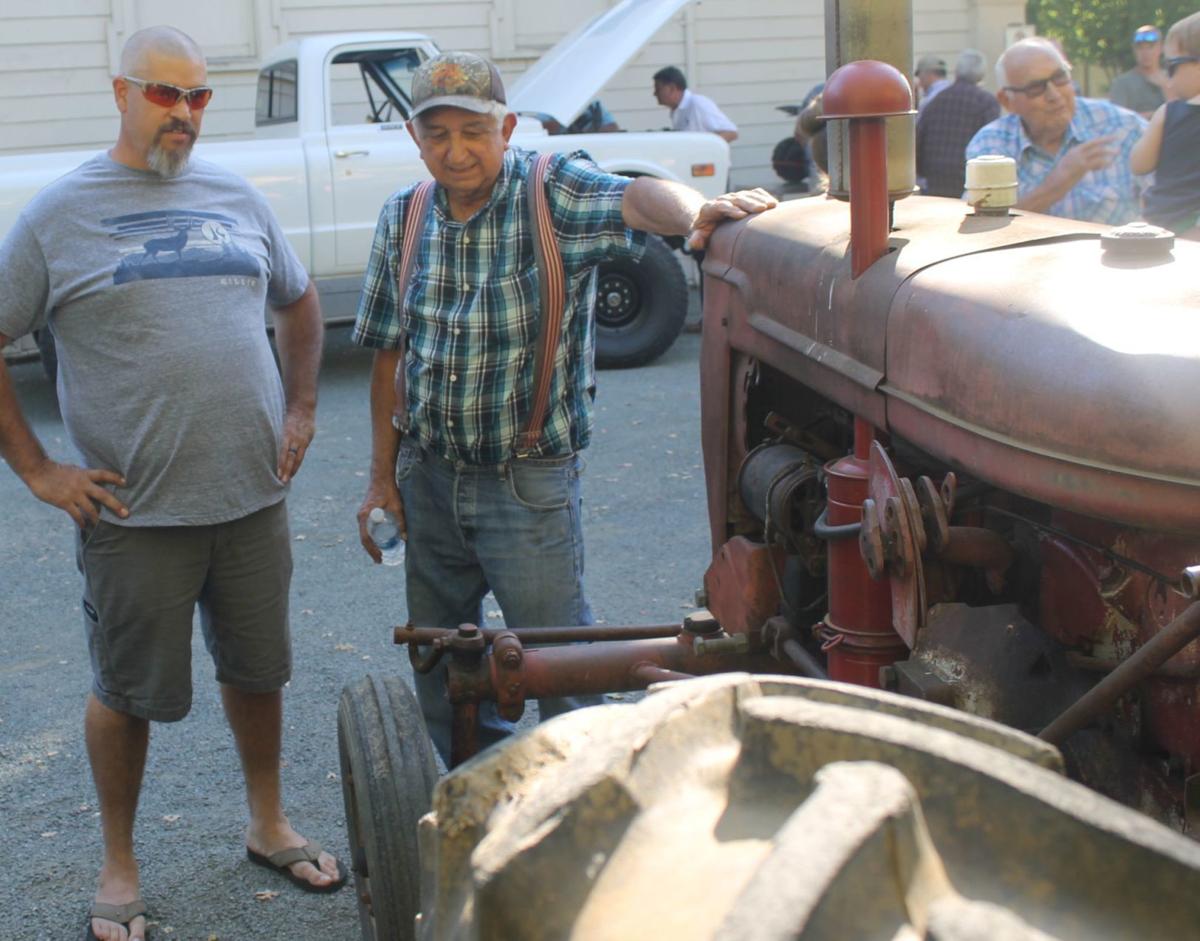 Frank Pina, center, shows off his 1941 Farmall International Harvester tractor that he bought about a year ago in Redding. He said he has 18 tractors, many of them restored. 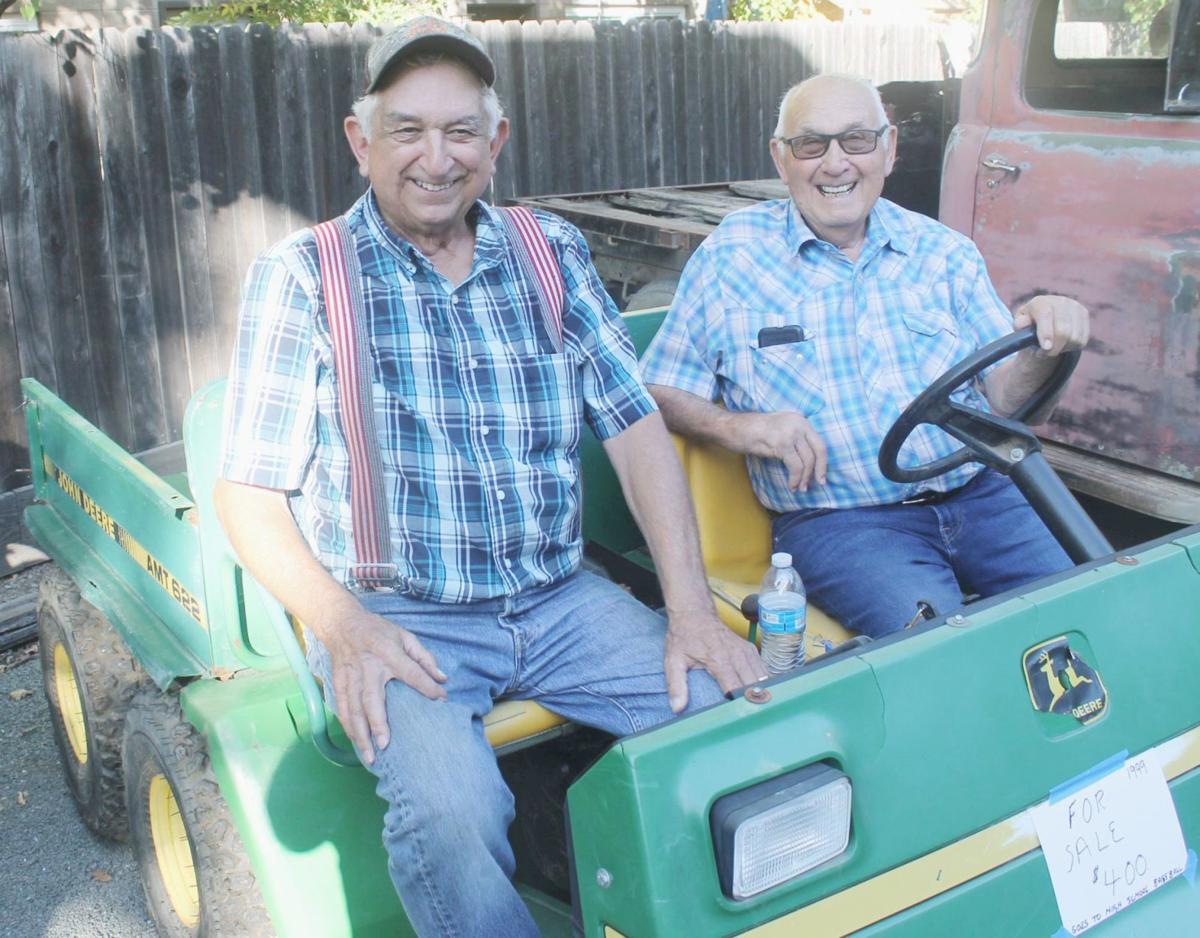 Frank Pina, left, and Frank Emmolo shared a laugh as they sat in a five-wheeled John Deere gas-powered hauler that Pina was selling for $400. It was found under the grandstands at the school and the proceeds of the sale will go to SHHS athletics. Pina and Emmolo have known each other for years, since they went to grammar school in Rutherford. 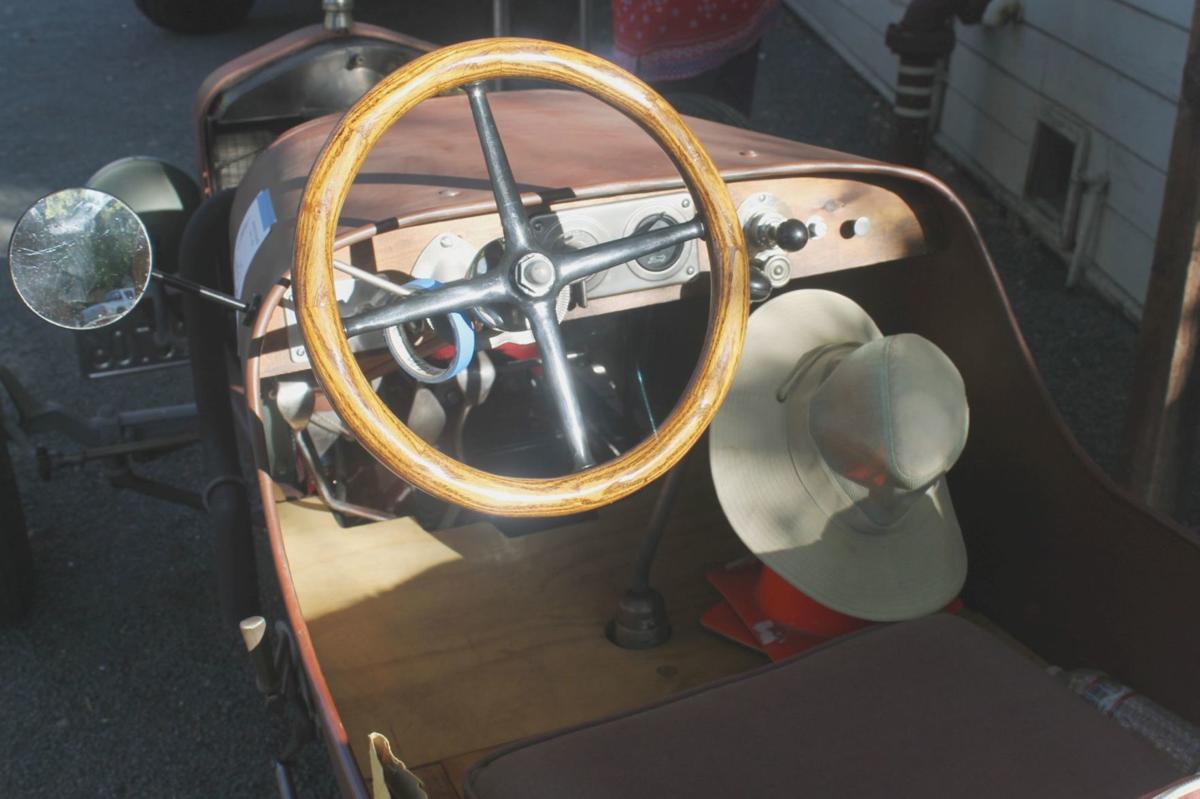 This beautiful wood steering wheel is part of Nick Coy's hand-built Model T Speedster with a Rajo head on top of the engine. Coy was in charge of the Native Sons' annual vehicle show, which included trucks, cars, Jeeps, and a few tractors. It was held Aug. 22, 2019 at the Native Sons Hall on Spring Street in St. Helena. 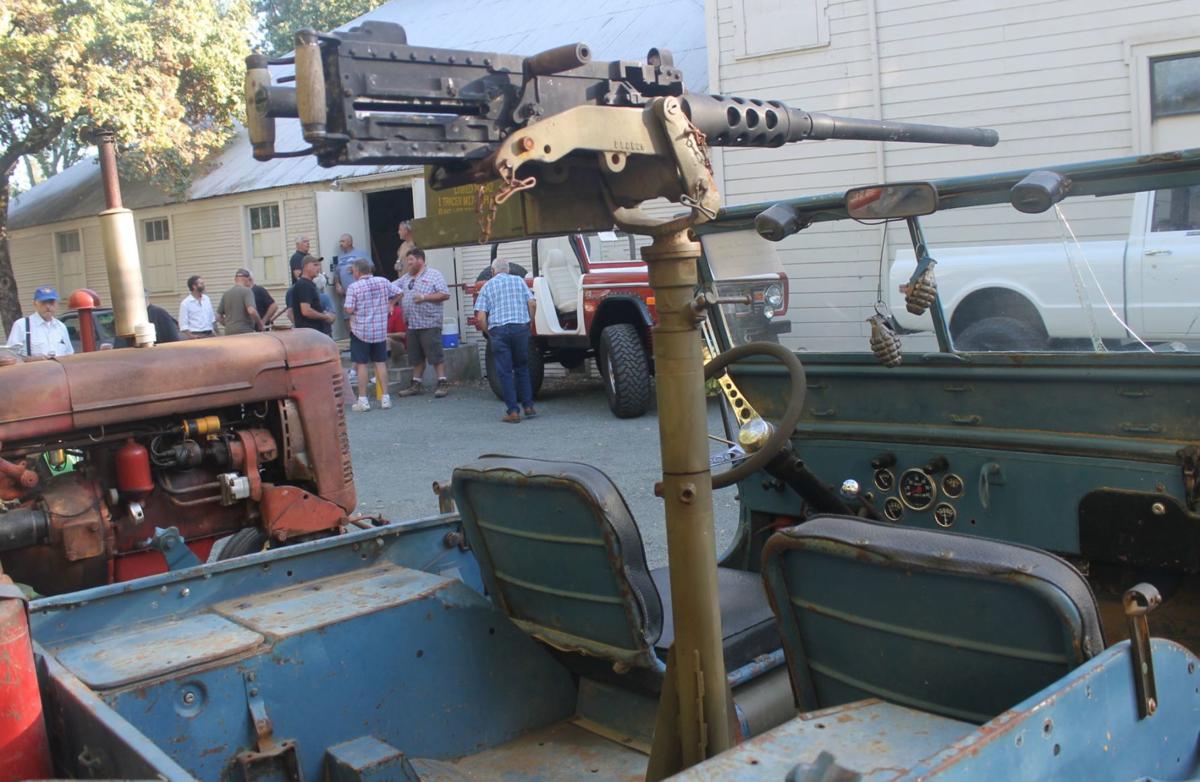 Sitting in Jack Varozza's Willys Jeep is a mounted machine gun, which doesn't fire nor swivel, but is sure a sight to behold. The machine gun was previously owned by the late Joe Potter, who was a St. Helena city councilman. 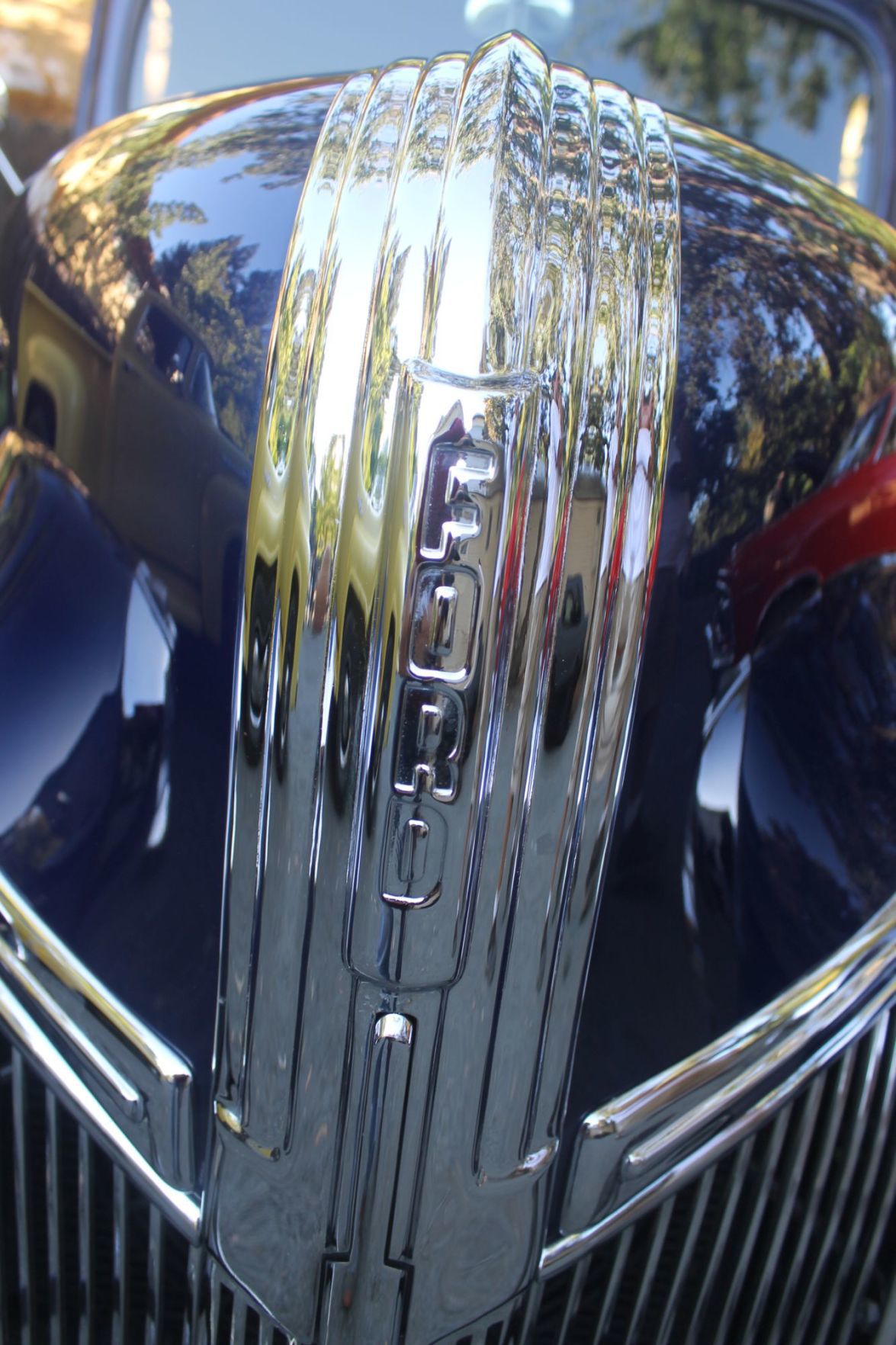 The chrome Ford emblem from this dark blue 1941 Ford pickup truck, owned by Taini Wiig, epitomizes the beauty of the Fords from that era. The pickup truck was one of about 18 vehicles that showed up at the Native Sons' Aug. 22 car, truck and tractor show, held at the Native Sons Hall on Spring Street in St. Helena. 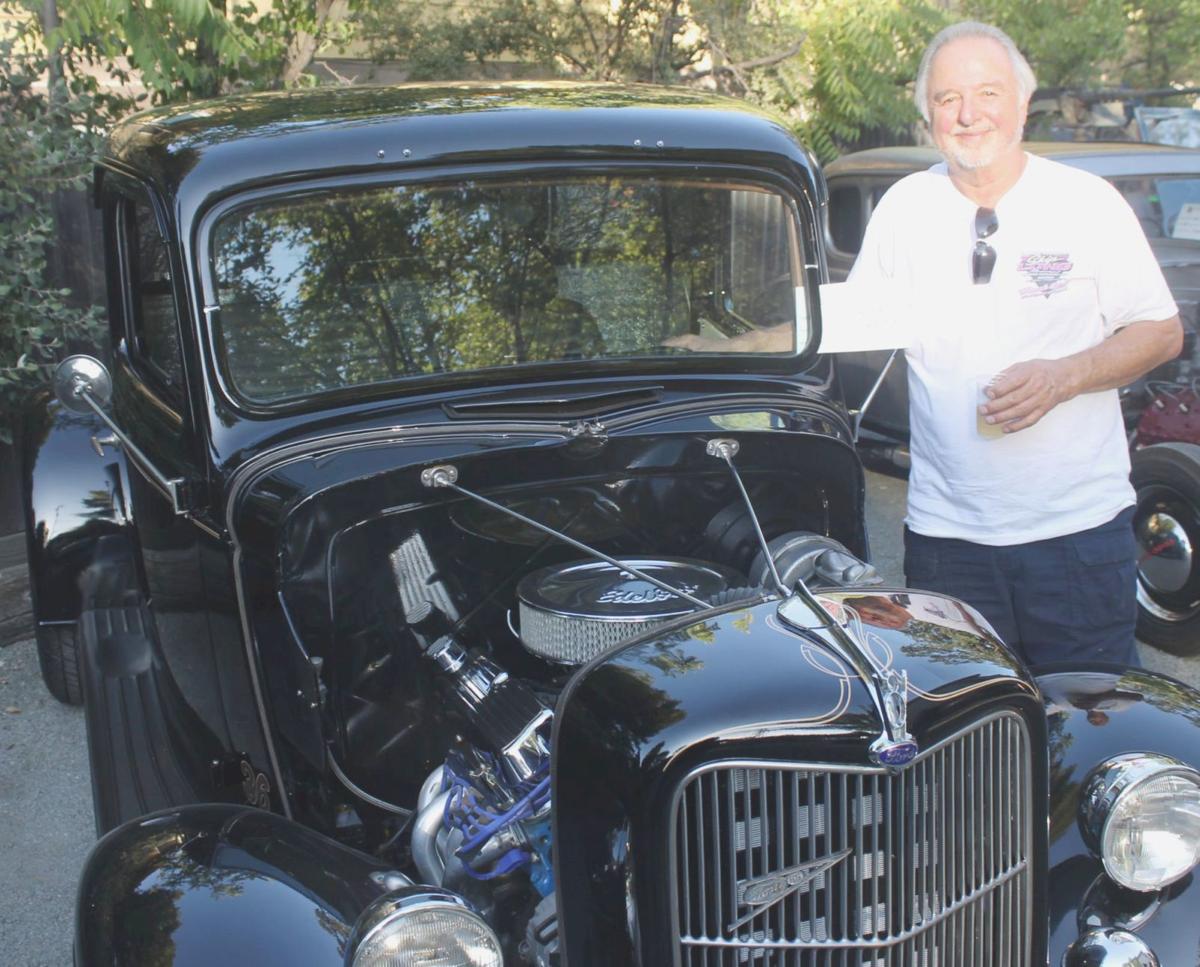 Rich Dudley of Napa brought his modified 1936 Ford pickup truck to the annual Native Sons' car show, which was held Aug. 22. Dudley said he first drove the Ford pickup truck when he was 12. He found it in a field, bought it in 1962 and years later, he restored and modified it.

Phil Murphy, center in red shirt, said the St. Helena parlor of the Native Sons of the Golden West has about 160 members and about 90 showed up for the group's annual car show, coordinated by Nick Coy Sr.

Frank Pina, left, and Frank Emmolo shared a laugh as they sat in a five-wheeled John Deere gas-powered hauler that Pina was selling for $400. It was found under the grandstands at the school and the proceeds of the sale will go to SHHS athletics. Pina and Emmolo have known each other for years, since they went to grammar school in Rutherford.

Building his 1930 Ford Model A with its flathead V-8 had taken Nick Coy Jr. about 10 years.

Coy’s Model A was one of nearly two dozen cars, trucks, Willys Jeeps and tractors that were displayed at the Aug. 22 annual car show put on for and by the members of St. Helena’s Native Sons of the Golden West Parlor No. 53.

Among the vehicles on display were:

Jeff Parady’s World War II-era Willys Jeep that had served in the Pacific. Parady and his crew at Pope Valley Garage, including A.J. Teaege, feverishly worked to complete the restoration of the original Willys Jeep, just for the car show;

The annual car show is one of the most popular events the Native Sons put on, and Phil Murphy estimated that 90 of the 160 members turned out for the event. At one point before dinner, Murphy gathered all of the members and asked them to stand between two trees in front of the Native Sons Hall, which was built in 1915.

The St. Helena Parlor was founded Feb. 14, 1885. Thirty years later, on June 25, 1915, the Star reported “the NSGW built a beautiful and commodious hall on Spring Street, which is a splendid addition to the town.”

Members meet once a month for dinner in their hall with 60 in attendance on average. Most members are longtime locals. There is camaraderie among the men, who like to reminisce about their youth. Dinner conversation is often about the good old days in St. Helena. Cigar smoking, once a regular feature, has gone out of fashion. Telling jokes is an important part of the dinner hour. Members can invite their male friends as guests.

At one point in the 1970s the organization had few members and was on the verge of disbanding. Bruno Bartolucci would not let that happen, lending his own money to pay hall expenses. A recruitment drive brought the parlor back to viability. For many years NSGW was run by Al Del Bondio and Bruno Bartolucci. Al Del Bondio loved to cook for the group. When Bruno died in 2010, his son Bill continued to volunteer.

Today Phil Murphy is the president and driving force behind Parlor No. 53. His helpers are Nick Coy, Mike Griffin and Ted Laurent.

Murphy views his work for the Native Sons Hall as a gift to the community. He is leading the effort to raise money for upgrades to the hall and is the one man who keeps everything running smoothly.

The primary fundraiser for Parlor No. 53 is the annual crab feed, which was held on Jan. 12 with 400 diners in attendance.

Griffin, Coy and Laurent do the cooking for the event, having taken over for Del Bondio and Bartolucci. Also helping are Jimmy Laurent, George Tagliaferri and Randy Wiig. The event is never advertised, relying on word of mouth to sell all tickets every year. Some members reserve a whole table for their group or family. This fundraiser provides the majority of the funds needed for maintenance of the Native Sons Hall.

‘Jewel of the community’

NSGW member Darrell Quirici said the Native Sons Hall is “truly a jewel of our community.” It is the largest event space within city limits and the most affordable. “Fundraisers, wedding receptions, memorial and post-funeral gatherings, private parties — you name it and it’s probably been held at the Native Sons Hall,” he added.

The Native Sons Hall continues to be the main event space for St. Helena. On Saturday, Oct. 19 it will host the seventh annual St. Helena Helena High School Athletic Hall of Fame dinner, where six distinguished athletes and coaches will be inducted. And in November, as it has in the past, it will be one of several St. Helena venues for the Napa Valley Film Festival.

In the past year, some of the events held at the Native Sons Hall include:

Additionally, many groups rent the hall for their meetings, including St. Helena Rotary Club, Improved Order of Redmen, Pocahontas and Sons of Italy.

One of the “funnest half-miles” there is on the World of Outlaws NOS Energy Drink Sprint Car Series tour.