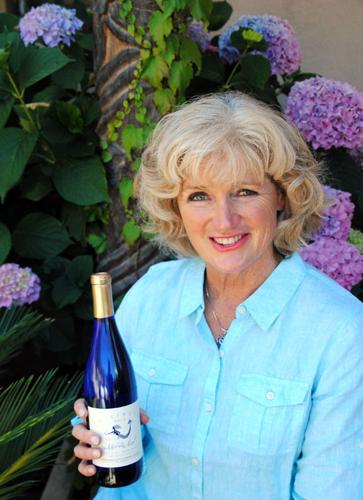 Winemaker Heidi Barrett will be sharing some of her wine-making secrets at Flavor! Napa Valley in a seminar on March 23. 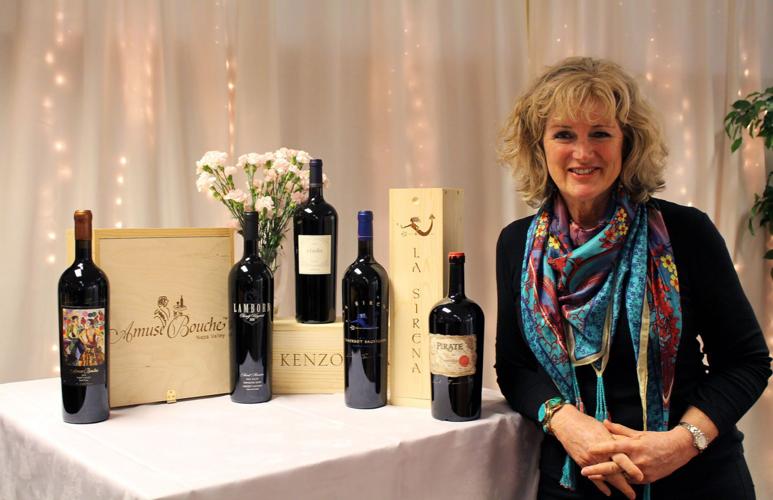 Winemaker Heidi Barrett poses with a few of her award-winning wines.

You could say that the wine world nearly missed out on Calistoga’s Heidi Barrett and her elegant, expertly-balanced cult cabernets. The high school aptitude tests had her pegged for a career in marine biology, but despite a deep affinity for the ocean, Barrett grew up around winemaking and felt as if she were simply wired for it.

“My mom was an artist, my dad was a super scientist, so my even genetic breeding was almost exactly winemaking,” she said.

Barrett applied to just one college, UC Davis, where she did take a scuba diving course in addition to her fermentation science studies. Her natural knack for winemaking revealed itself quickly, and by age 25, she had the title of winemaker at Buehler Vineyards.

Fast-forward to five 100-point scores later from Robert Parker, where Heidi Barrett is a bit of a household name in the Napa Valley. Approaching 60 this year, Barrett currently juggles a stable of eight high-end winery clients, in addition to two personal brands (one with her husband Bo), while still finding time for the occasional ocean dive.

The gigs that put Barrett on the map—namely Screaming Eagle and Dalle Valle Vineyards—actually came out of a desire to focus more on her most important job: mom.

When she had her second daughter Chelsea, Barrett decided to pull winemaking back to part-time. After asking around to other independent winemakers if they had some extra work to hand off, Dalle Valle became her first client in 1988.

“I always consider being a mom my number one job, and I fit in my winemaking career around that,” she said.

The move to go solo turned out to be the best one for both her family and her career, and not just because of the stream of accolades that followed.

“Even when I was full time, I always sort of knew I could do more and I wanted to be more challenged by multiple clients, so it actually suits my personality really well to do multiple jobs,” she said.

“My learning curve went up a lot faster because I saw a lot more things and variations working for other people, and I could then use that information to help each client individually. It kind of worked to my benefit, first with the family and then with my skill set and professionally.”

In 1992, proprietor Gustav Dalle Valle introduced Barrett to his real estate agent, Jean Phillips, who also happened to be starting her own project: Screaming Eagle. She brought Barrett on for the brand’s first vintage, and with its 1995 release, everything changed.

What’s in a score?

Successful people are often asked about the moment they knew they made it. While Barrett is busy looking forward, not back, her colleagues might say it was when Robert Parker awarded both of the 1992 vintages of cabernet for Screaming Eagle and Dalle Valle 100 points.

“Now people are watching; now you have to do it consistently,” Barrett recalled of the time. “I thought, ‘Good, they’ve noticed, but watch this.’”

With five total perfect scores in her career, Barrett has been lauded for the rare accomplishment, given nicknames like “The First Lady of Wine” and “The Wine Diva of Napa Valley.”

But she tries not to put too much stock into it.

“I don’t pay much attention to the scores because it’s very distracting, and if you start to believe that, you can get big head winemaker syndrome, which I never want to go that route,” she said. “The obvious thing to say is that I don’t want to rest on my laurels, but it’s true. You never want to just think, those were my best days. I’m still making my best wines, I think.”

It is flattering, she admits, but it’s important to remember that the scoring process is subjective.

“While it’s very complimentary to get those scores, I sort of rationalize it — not minimize it, I’m very proud of those accomplishments, but it’s not the end all be all. I know it’s one person’s opinion on one day, and I think a lot of the wines I’ve made could get that score on any given day,” she said. “I make it for people, not one person.”

Like Napa versus Sonoma, Nike versus Adidas and Nikon versus Canon, Barrett says there are two distinct camps for winemakers: cab or pinot.

She’s team cabernet, all the way.

“It’s almost like two different schools of thought. There’s ether the cab people or the pinot people, and rarely do you get a winemaker who loves to make both. They’re completely different philosophies,” she said.

Because Barrett is not a fan of sipping pinot, it’s the one varietal she doesn’t make. She’s experimented with everything from riesling to malbec, but cabernet is her magnum opus, and she’s got the resume to prove it.

“It’s the highest expression of red wine, I think. It’s got the most ageability, it is challenging to do well, so it’s hard to make, but it’s also very satisfying if you get it right,” said Barrett. “If you can make something that is sort of like a time capsule, that people can drink over a 20-year period or more, how fun is that?”

Like scuba diving, Barrett’s personal wine label provides her with a fun, creative outlet away from work. She named it La Sirena, meaning “the mermaid”, as a tribute to the sea.

“For my brand, I focus on the stuff I personally like. I can play with it,” she said. “I don’t get the chance to experiment that much on my client’s wines, nor would I. They trust me to make what came off of their estate, I’m going to do that well, but where I can sort of experiment with is my own stuff. I can get more creative on those.”

La Sirena was born in 1994 out of opportunity. Barrett was hired to make sangiovese for a custom crush client, but due to family politics, they had to pull the plug on the project. She loved it, so she decided to buy the bulk wine for herself.

With a $25,000 loan, Barrett was able to afford the wine and bottling supplies to get through her first vintage and start her brand. After a few years, she started to expand.

“I thought, ‘Now you’ve bit off this thing, you’ve started your own brand, what do you really want to make?’ Because I wouldn’t have picked sangiovese, but it was my opportunity,” she said. “Cab is my thing, so I started making cab in ‘96 from our own property.”

The sangiovese contract eventually ran out, but Barrett has since added in several other fun wines, including a dry muscat, a rosé out of primitivo (set to release this spring) and a blend called Pirate, which has acquired quite a following.

“That year, I had a lot of fun grapes come down the pipeline that I was experimenting with, thinking I’d expand my blends, but if didn’t go into my blends as well as I’d thought. I ended up creating a whole new wine from all of these new things I’d bought, and some from our own vineyard. It turned out to be a blend of seven varieties,” she said.

“After a long day in the lab, I was kind of punchy and tired and said, ‘Oh, it’s kind of like the treasure of the seven seas, maybe I could name it Pirate.’ And sure enough, nobody had trademarked that for wine, so I got it.”

She doesn’t exactly have much room in her schedule for more, but she does have four rules when considering taking on a new client.

“Number one, I need to like the people,” she said. “Number two, the owners have to have a desire to make something special, something above average. I don’t really do average. I want to do something awesome if I’m going to work for them, and they need potential to do that.”

Simplicity is also key, as she’s not looking to sign on to a huge project with legions of labels or a massive production.

And lastly, they need to be within a 30-minute driving — or flying — distance of Barrett’s house in Calistoga.

Her little secret to juggling so many clients is her helicopter, which enables her to quickly and efficiently make her daily rounds, flying into one vineyard to another for grape sampling. She started taking lessons in 2006.

“Flying has really helped with saving time and expanding. I can work with Kenzo, which is an hour drive for me, but it’s a 15-minute flight,” she said.

Soaring over rushhour traffic, Napa’s Kenzo Estate was her first touchdown when she got her license in 2010.

And her personal dreams aside, she, above all, loves helping her client’s realize theirs.

“Putting some of these little brands on the map and helping owners create their dream has been a lot of fun,” she said.

On Thursday, March 23 at 2 p.m., Heidi Barrett will participate in a seminar and tasting as part of the upcoming Flavor! Napa Valley festival. Moderated by wine, food and television star Leslie Hartley-Sbrocco of KQED’s “Check, Please!” Barrett will divulge secrets behind her critically-acclaimed wines. Tickets can be purchased at www.flavornapavalley.com.

Winemaker Heidi Barrett will be sharing some of her wine-making secrets at Flavor! Napa Valley in a seminar on March 23.

Winemaker Heidi Barrett poses with a few of her award-winning wines.