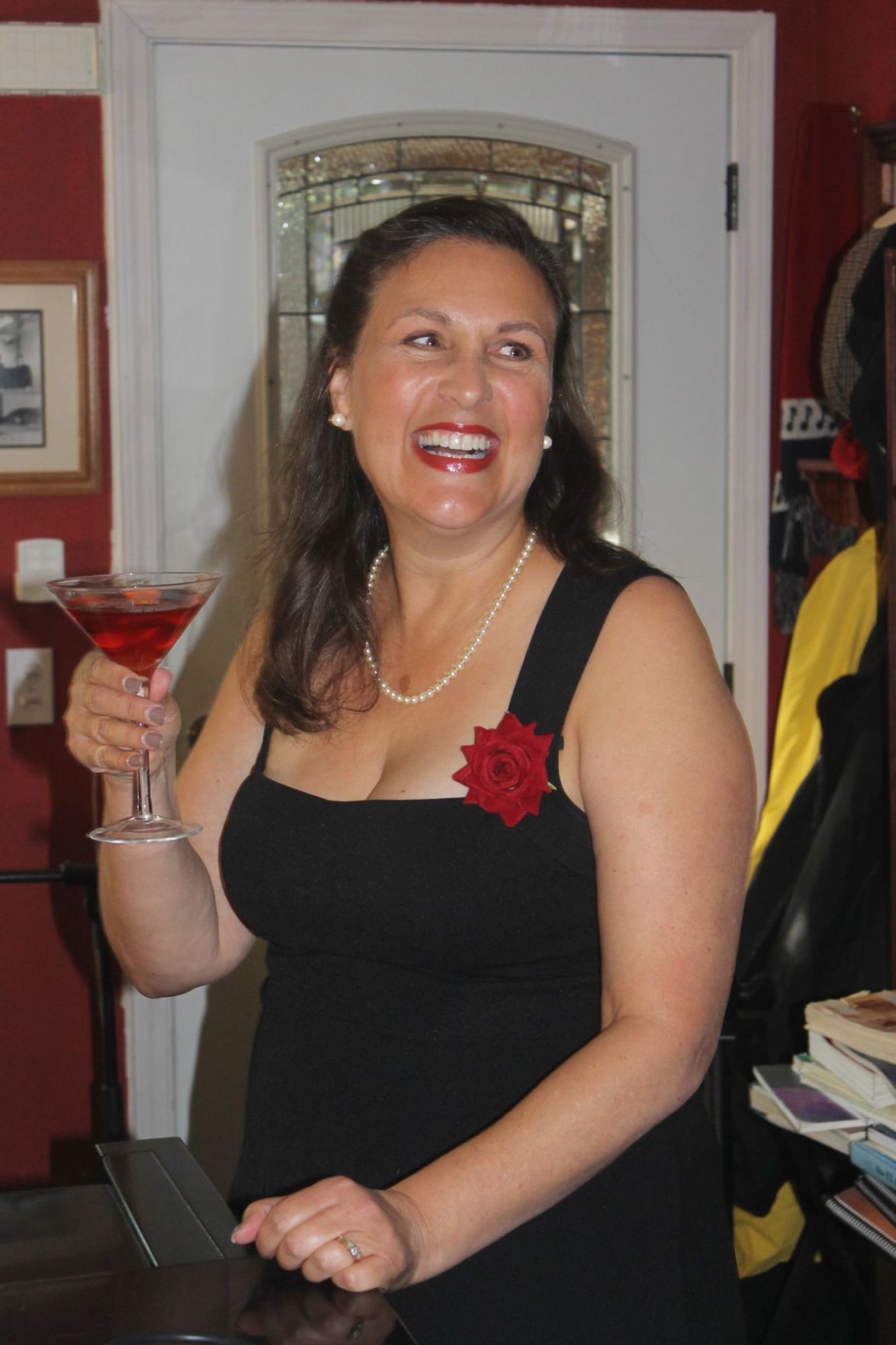 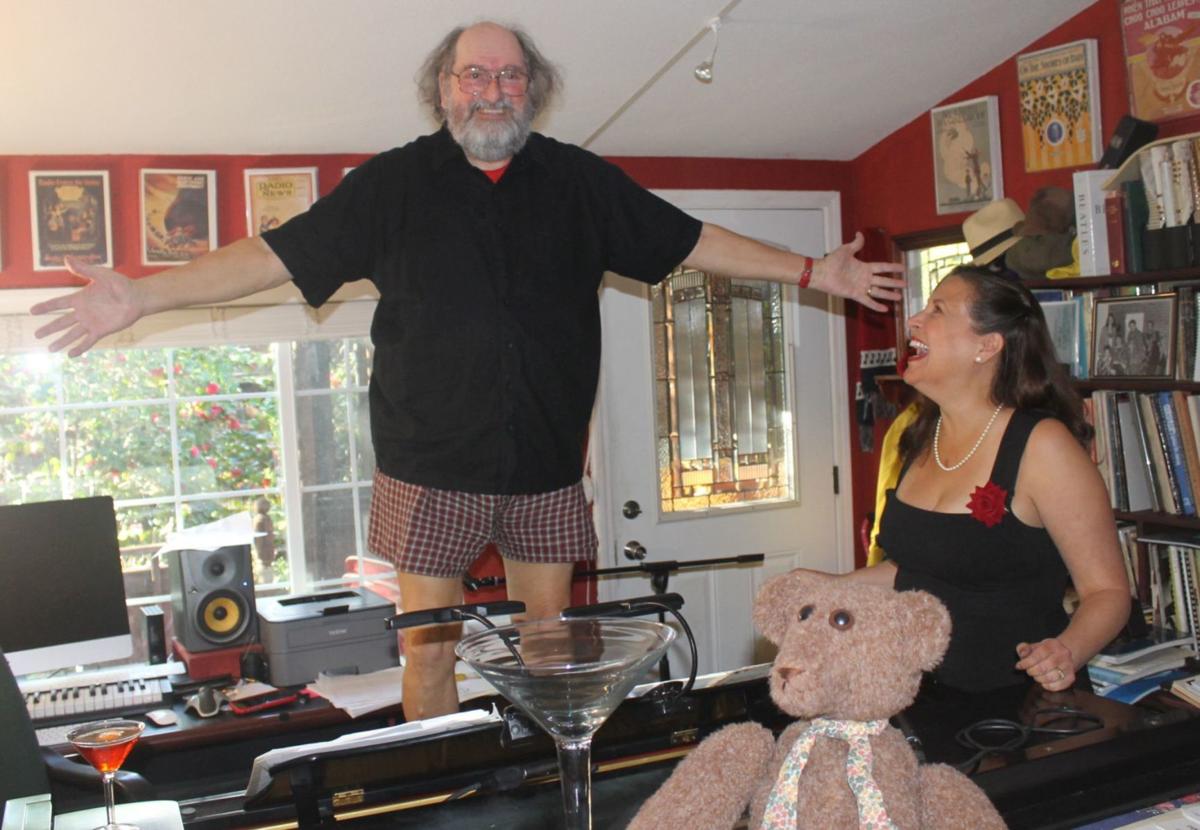 Showing that he was perfectly dressed for a cocktail party and piano bar ... at least from the waist up ... was pianist Mike Greensill, who performed with Kellie Fuller on Thursday, March 19. 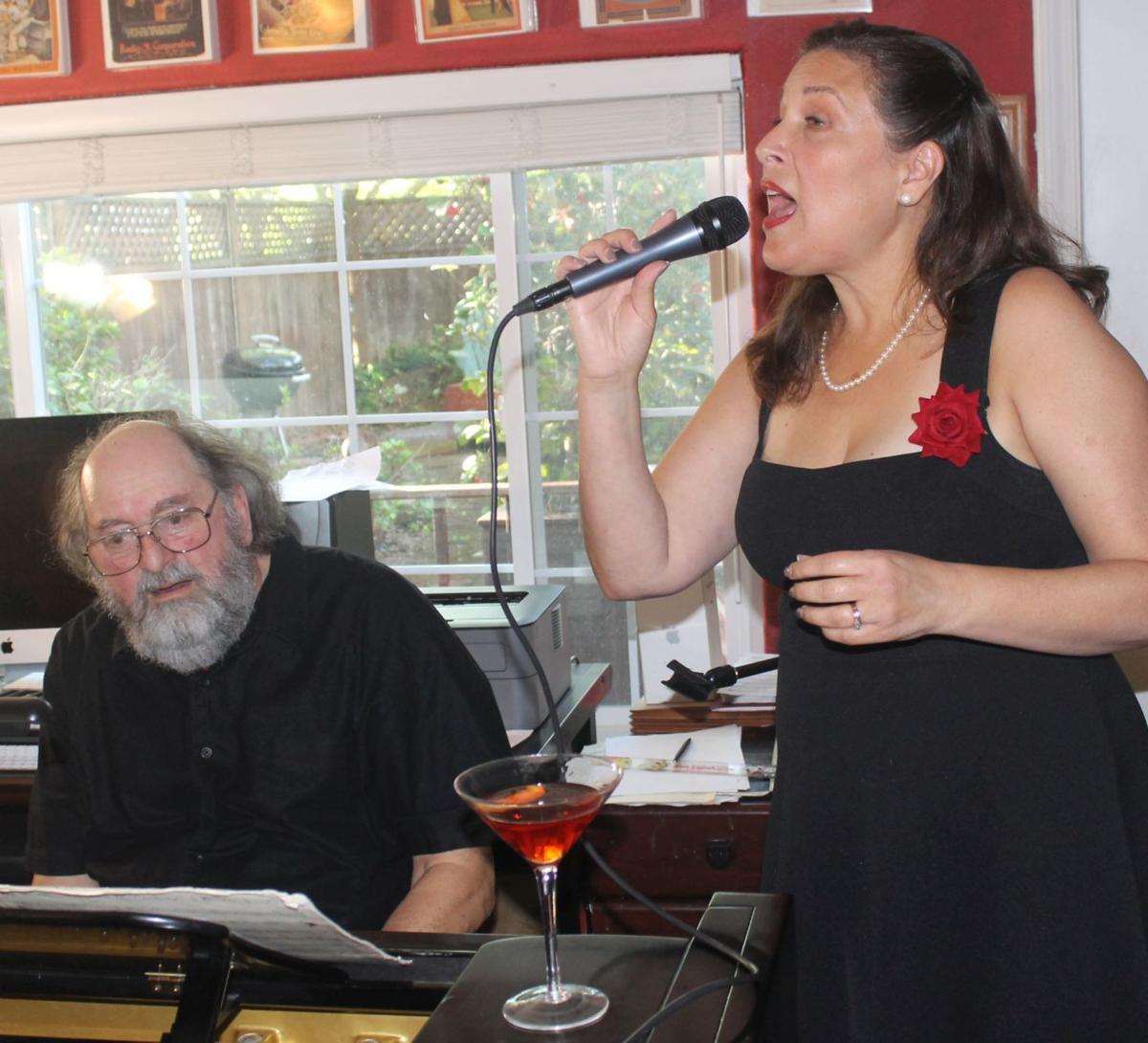 Kellie Fuller belts out one of her favorite "charts" during a Facebook Live concert on Thursday, March 19. Accompanying her is pianist Mike Greensill, who hosted the concert in his living room.

I walked into Mike Greensill’s house in Vineyard Valley and the bartender asked if I wanted a Negroni, an Italian cocktail. “Straight or on the rocks?” he asked.

“Good man,” said the bartender, who was Tom Fuller. The others in Greensill’s living room, attending the virtual cocktail party and piano bar, were sipping their Negronis, some with ice, some without.

Greensill was seated at the piano and Napa Valley vocalist Kellie Fuller was at the microphone. She was dressed in a beautiful black dress with a red rose, and she wore a string of pearls around her neck. Greensill was in a black, short sleeve shirt. Seated, you couldn’t tell he wasn’t wearing any pants, just boxer shorts. Fuller, too, was dressed for the camera … she was wearing blue socks and was glad she didn’t have to wear high heels.

Two cameras were around the neck of AP photographer Eric Risberg, who was both taking photos and sipping his cocktail, which is one part each of Gordon’s gin, vermouth rosso and Campari, with an orange peel as a garish. Tom Fuller was also in charge of the Smartphone and starting the video when Greensill and Fuller started the impromptu concert. There were five of us in the room.

The virtual concert, showed on Facebook Live, was to start at 5 p.m. Thursday, March 19. As her husband started the video feed, Fuller said, “Cheers, everyone. This is the cocktail hour. I hope you’ve got your favorite beverage.” What a way to take the audience back to the 1940s … “We don’t know exactly what we’re going to do,” she continued, “but, nothing later than … ” Greensill interrupted, “I don’t know anything written after 1965, just so you know that.” Fuller asked him, “So you can’t do Beyoncé?” His answer, “No, other people do it better.”

Then they were off, for an hour of songs from the Great American Songbook, a few jazz standards and songs from the 1960s, including “Downtown” by Petula Clark. Fuller said she had “picked some of her favorite charts” laid out on a table next to the piano in Greensill’s crowded living room, filled with bookcases crammed with vinyl records, CDs and books.

Why the virtual cocktail party and piano bar? “Because we are all kind of stuck at home, if you will,” Fuller said. “We don’t get out too much and we certainly can’t go to the Blue Note or anywhere else, so we’re going to entertain people virtually.”

Then she added, “It’s also for fun, to lift people’s spirits. We love music and it’s one thing to enjoy your music by yourself, which we do, but it’s something special when you’re sharing with an audience. Even a virtual audience on Facebook Live, they can still make comments, they can request songs, so we can still interact with them.”

On the live feed, people did comment: Steve Sando said, “I’m drunk with love,” while Shauna Marshall wrote, “Beautiful!” There was a request for “Moon River,” which was done, and Karen Hutchinson Calhoun wrote, “Thank you.” Terry and Rocky Miller wrote, “Lovely,” and Kevin Galloway commented, “This is awesome. Thank you.”

David Rojas was also enjoying the concert, and this being the Napa Valley, just had to comment on opening a 1964 Cabernet Sauvignon from BV. Fuller said she wished he would pass the wine around … so everyone could have a sip.

John Heflebower watched and listened, as did Judd Finkelstein, Baile Heather and Richard Childress, who wrote, “The piano is drinking,” (there was a big but empty martini glass on top of the piano).

Linda Kosut wrote, “Miss making music with you Mike. Maybe sometime when this shelter is over, I’ll take a ride up …”

The duo teamed up on “Unforgettable,” and Fuller banged out “I Like Men,” and they toasted “Dear Harry Price,” the Napa visionary, who died in February 2019 at age 77.

‘We’re all six feet away’

Then nearly as quickly as it began, the virtual cocktail party and piano bar event was over. Fuller said she thought about putting the concert together about two weeks ago because gigs were being canceled, not only in April, but in May, June and in the summer. “When I saw that Mike as well as other musicians who make their living playing music were getting everything canceled, I thought maybe we could go online and have people do a virtual tip through Paypal or Venmo.”

As it turned out, 140 people were watching at one point, 171 comments were made, 28 people shared it and the hour-long concert drew 832 views. Maybe more importantly, those viewers donated $360.

Greensill said he was thrilled and incredibly grateful and added that maybe this might be a new way going forward. “Those of us who do this for a living, we’re still facing quite a few months ahead with absolutely no income at all.” On Thursday, they both agreed they would perform again in Greensill’s living room, but since the shelter-in-place order went into effect, those plans were scrubbed. Instead, Greensill is playing the piano solo at 3 p.m. each day.

Greensill added, “On the Internet, we’re all six feet away.”

Currently, America’s foremost and highly respected art form, jazz music, has less of a presence. The other forms of American pop music, which …

Calistoga musician Larry Vuckovich will receive a Lifetime Achievement Award from Serbia, in his former country of Yugoslavia when he plays at…

The Napa Valley Vintners say they will cancel the annual Auction Napa Valley fundraiser in June because of the coronavirus.

Calistoga Jazz pianist Larry Vuckovich will live stream a concert performance from his home at 1 p.m., Saturday, May 30.

Showing that he was perfectly dressed for a cocktail party and piano bar ... at least from the waist up ... was pianist Mike Greensill, who performed with Kellie Fuller on Thursday, March 19.

Kellie Fuller belts out one of her favorite "charts" during a Facebook Live concert on Thursday, March 19. Accompanying her is pianist Mike Greensill, who hosted the concert in his living room.