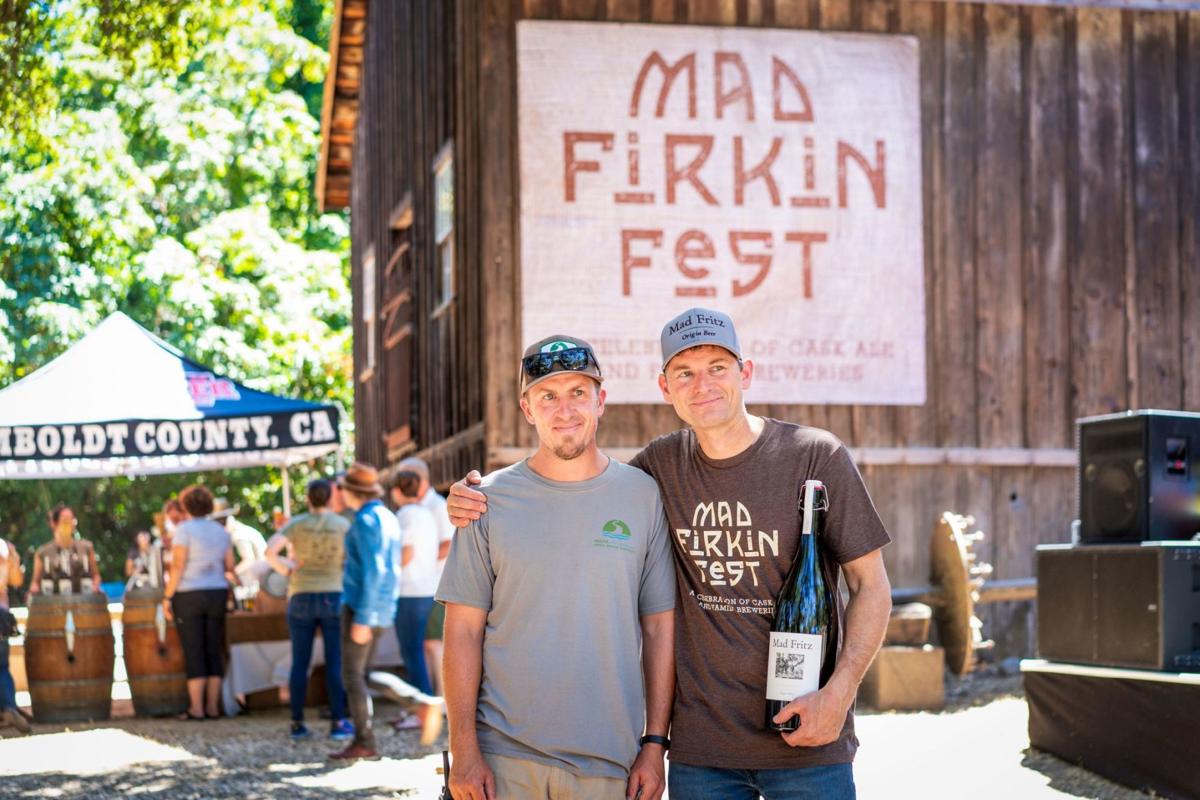 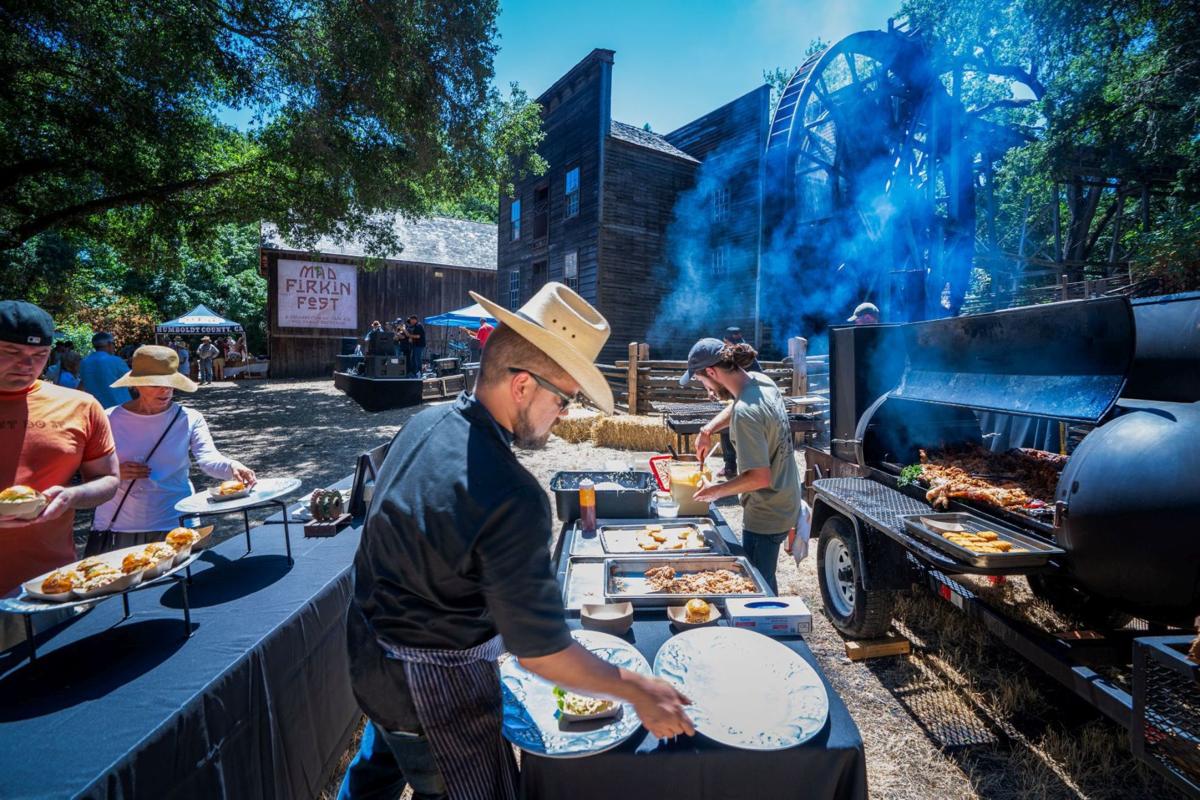 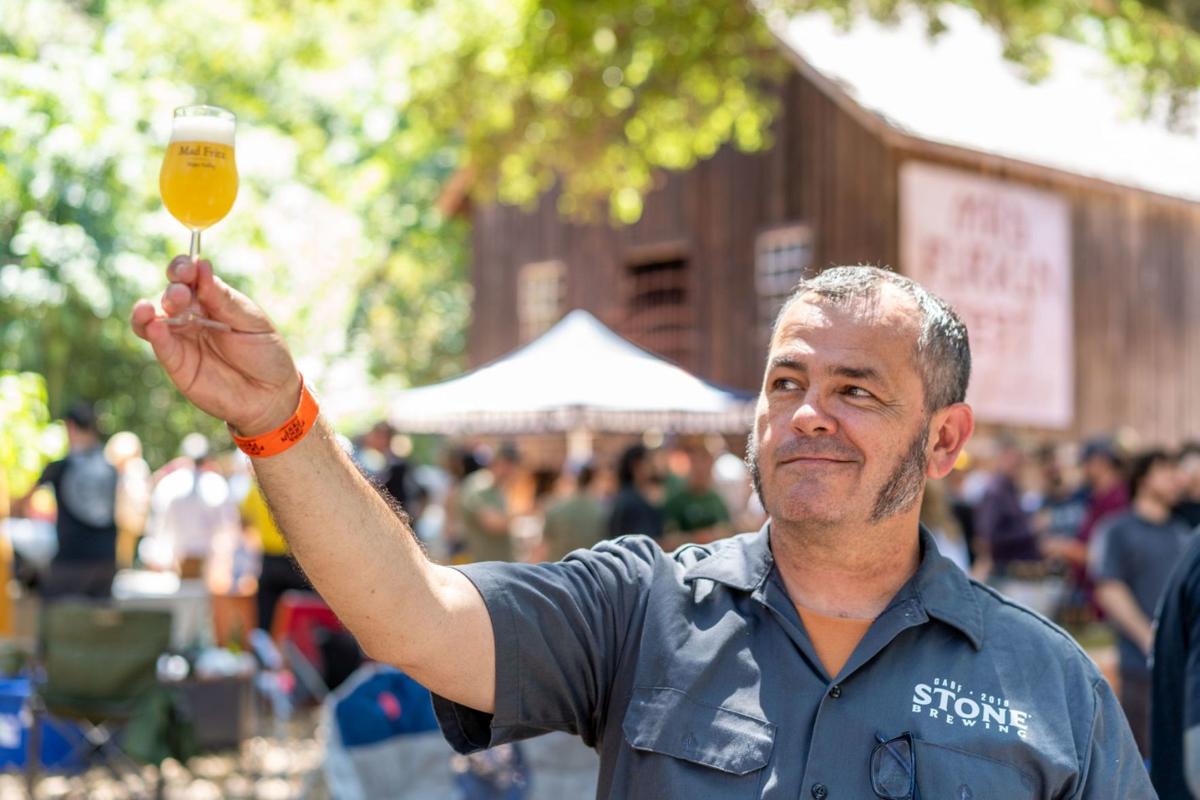 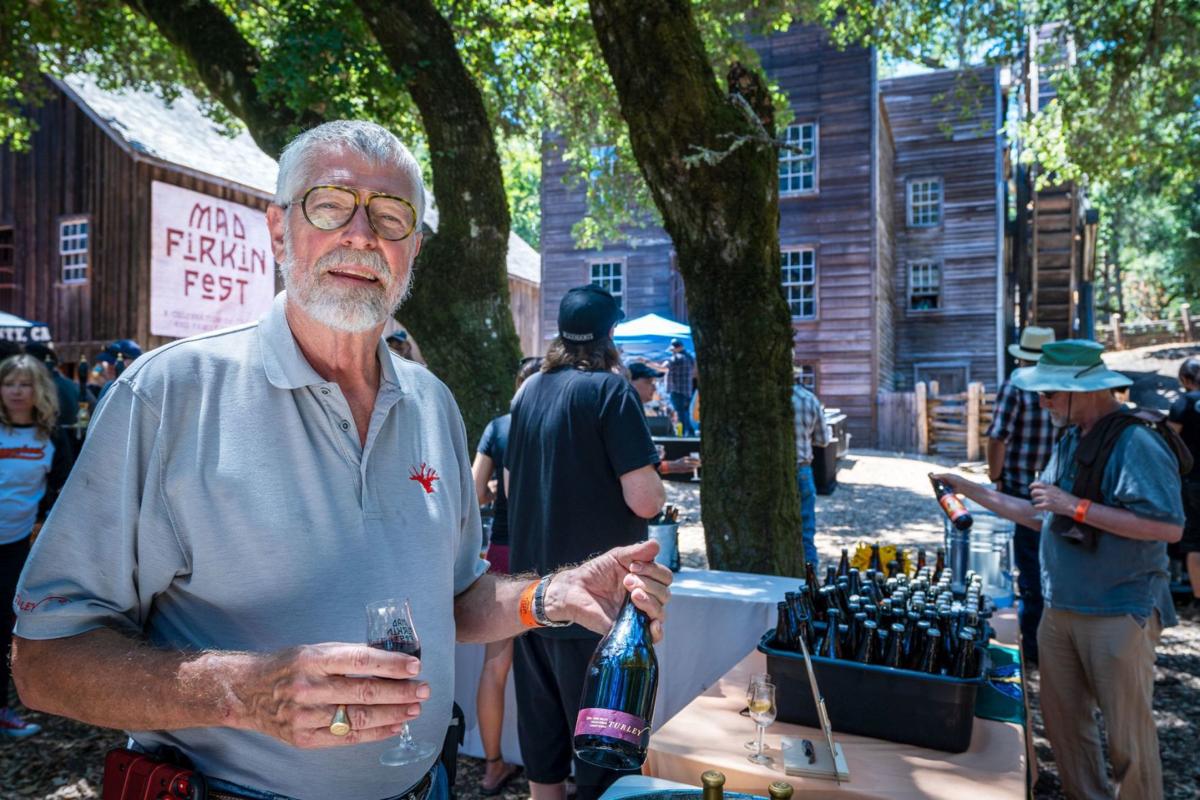 Vintner Larry Turley provided guests with a wine alternative to the many beers on display at the first Mad Firkin Beer Festival on Aug. 3 at Napa Valley’s historic Bale Grist Mill. 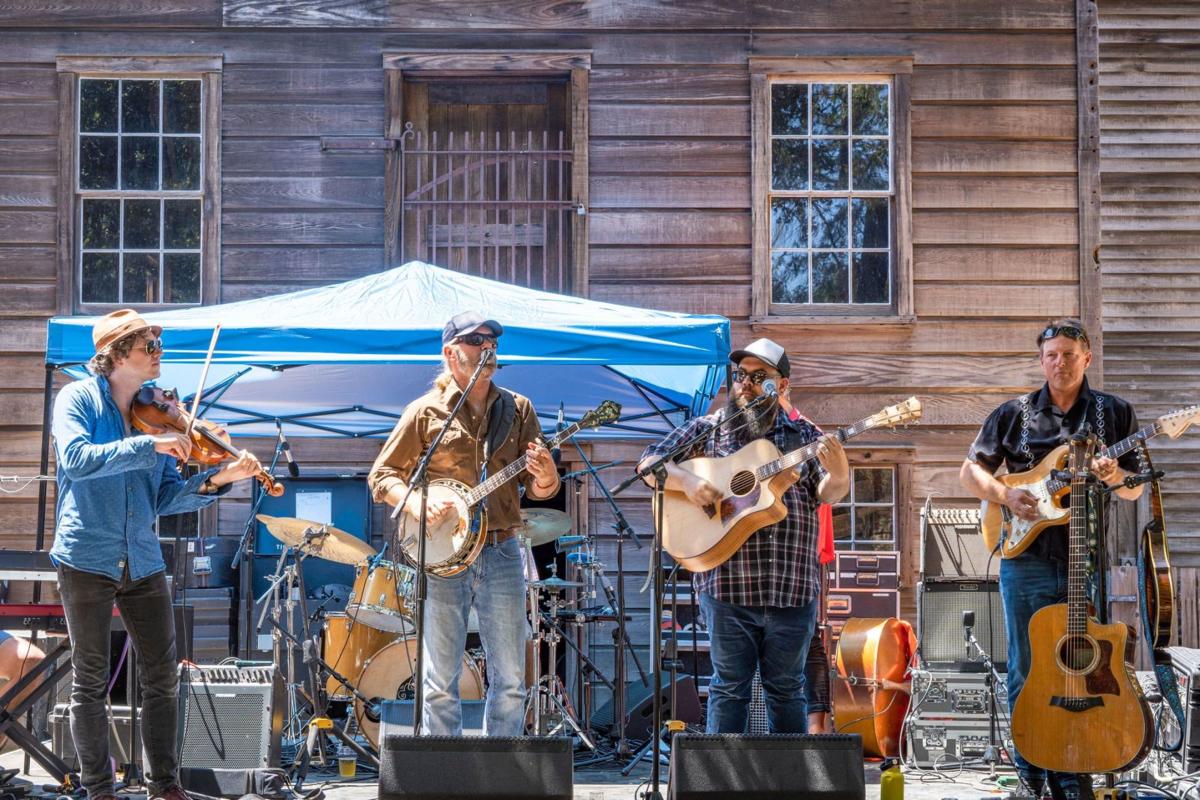 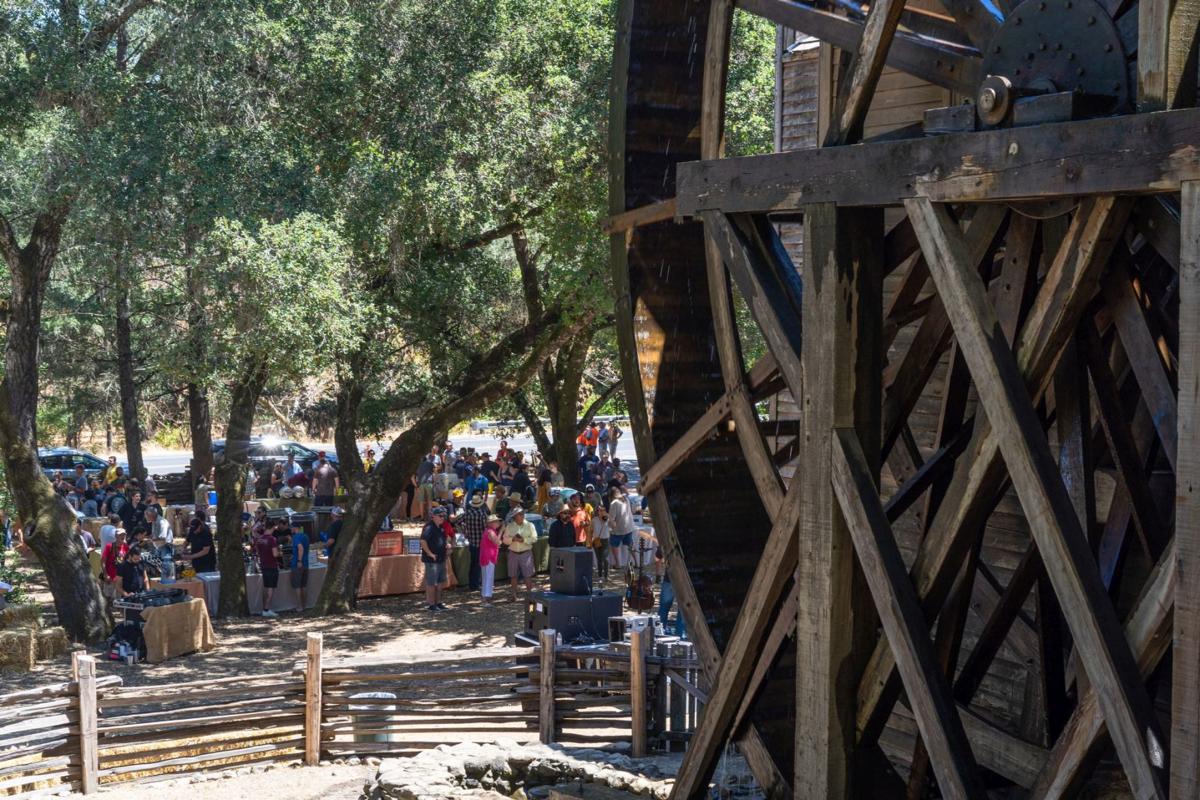 Vintner Larry Turley provided guests with a wine alternative to the many beers on display at the first Mad Firkin Beer Festival on Aug. 3 at Napa Valley’s historic Bale Grist Mill.

The event was the brainchild of Mad Fritz Brewery, a local beer producer that is co-owned by master brewer/winemaker Nile Zacherle and his winemaking wife, Whitney Fisher, in collaboration with the Napa Valley State Parks Association (NVSPA) and the Napa County Regional Parks and Open Space District (NCRPOSD). Profits from the event will help augment the Napa County parks’ operating budget.

Due to limited parking, most guests either hiked in from Bothe Park or were shuttled from St. Helena. With the temperature hovering in the mid-90s, guests lingered in the shade and sipped on a variety of cold libations presented by dozens of brewers while they enjoyed music from the bluegrass/Southern rock band Poor Man’s Whiskey and ate pulled-pork barbecue from Josh Mitchell of Heritage Catering, all while the mill’s waterwheel turned slowly in the background – a constant and impressive reminder of the site’s historic origins.

“We wanted to celebrate the fifth anniversary of Mad Fritz by showcasing all the amazing beer being produced in the area but also to just have a firkin-good time at what is one of the only such mills left in the U.S.,” Zacherle said.

A firkin is a five- to 10-gallon beer cask that often holds naturally carbonated and hand-tapped beers, such as those served at the event.

“We are excited to have this new event at the Mill,” said Jason Jordan, NCRPOSD’s park steward for the Bothe-Napa Valley State Park and the Bale Grist Mill. “We do not receive any state or federal money to operate these parks, so donations and events like these and other local support are important. This old mill is really one of a kind, and having folks come here who might not know much about it is a way to spread the word.”

According to a state parks flyer, the mill is named after Edward Turner Bale, an English citizen who immigrated to Monterey, the capital of Alta California, in the 1830s. In 1839 he married Maria Soberanes, the niece of Mariano and Salvador Vallejo. A year later Bale applied for Mexican citizenship and Gen. Vallejo appointed him as surgeon-in-chief of the Northern Mexican army. The following year, Gov. Juan B. Alvarado granted Bale more than 17,000 acres of Wappo territory (today’s Calistoga and St. Helena).

The Bales built an adobe home on what is now known as Whitehall Lane in St. Helena and in 1843 commissioned the building of the gristmill, paying contractors with portions of their land or selling off parcels to pay debts. The new mill’s water came from Mill Creek and was used to turn a 20-foot waterwheel that in turn powered the enormous locally quarried millstones.

In 1848 Bale left the Napa Valley to seek gold in the Sierra Nevada mountains. The following year he returned ill and died soon after. His young wife was left with six children and huge debts against Bale’s property.

The census of 1850 shows that the 27-year-old widow had only roughly 1,500 acres left of the original 17,000 acres. Nevertheless, instead of selling off the remaining land she dug in and hired Leonard Lillie to expand the grist mill, building and installing a larger and more powerful 36-foot waterwheel.

Soberanes-Bale ran the mill successfully, paid the debts and eventually sold the mill to her daughter, Isadora Bruck, in 1860.

A succession of people owned the mill after Bruck, including the Rev. Theodore Lyman, who in 1871 installed a water-powered turbine to replace the waterwheel. Mill operations finally ceased in 1905, and Lyman’s family donated the mill to the Native Sons of the Golden West in 1923. They eventually deeded the site to the Napa County Historical Society in 1941.

By 1988 the mill had been restored to operating condition and was milling grain again. Beginning in 2005, volunteers and California State Parks joined forces to restore the grain-cleaning and sifting machinery, and in 2012 NCRPOSD took over operations. Today the water-powered gristmill is one of only two water-driven mills remaining west of the Mississippi River.

Around the water cooler

“Back in the day, long before the coffee shop on every corner, the mill was the centerpiece of social activity in Napa Valley,” Zacherle said. “And it’s happening again. We are even milling some of our grains here now, too.”

A few of the Mad Fritz beers are made with local grains ground at the mill, using the ancient stone grinding wheels powered by the turning waterwheel.

“It’s awesome to see a beer that is not only grown and made locally but also utilizes the historic mill to process the grains,” said Stephen Harle, miller at the Bale Mill. “There’s really nothing like it going on anywhere in the world.”

Since then the small Mad Fritz Brewing Co. in St. Helena has been on the cutting edge of craft beer brewing, producing beers made with only locally grown ingredients — barley and hops — malting their own grain, and even sourcing water from regional artesian local springs and aquifers.

The name of the brewery came from blending Zacherle and Fisher’s children’s names, Madeleine (Maddie) and Frederick (Fritz). The labels on each beer bottle are whimsical, with images often taken from “Aesop’s Fables” and names such as “The Boy Who Cried Wolf—Biere de Garde,” “The Lion and the Mouse—Abbey Ale,” or the new “Terroir Series” of ales that source all ingredients from Napa or Sonoma.

“I’ve known Nile for over 20 years and he’s always been a visionary,” said Steve Gonzalez, head brewer at Stone Brewery, Napa. “I remember him telling me then that he was going to make a barrel-aged pilsner, which just wasn’t done. Now seeing him have such success, it’s great. People are loving it and we’re all here having a good time, supporting a worthy cause, too.”

In addition to the variety of styles of ales and lagers from which to choose, a few local vintners were also pouring their wines at the beer-centric event.

“I think Nile invited me because I’m a neighbor and he was worried I might complain about the noise,” joked vintner Larry Turley, owner of Turley wines. “But seriously, this is important because this historic mill needs our support and these artisan brewers remind me of some of the early winemakers back in the 1980s who were doing things that pushed the envelope of fermentation science.”

According to the America’s Beer Distributors’ website, in 2018, the U.S. beer industry shipped (sold) 202.2 million barrels of beer – equivalent to more than 2.8 billion cases of 24 12-ounce servings. Most of these beers are made in enormous factories that use generic ingredients mass-farmed in Midwestern states. For these beers, similar to soft-drink products such as Coca-Cola, the emphasis is on consistency of flavor and a steady supply. But for the last couple of decades a new type of beer has been on the rise, and as with many fine wines, the emphasis is on local ingredients and hand-crafted artistry.

Will the Napa Valley’s wine culture ever be displaced by breweries? Not likely, but it is refreshing to see alternatives that maintain the quality and artisanal ethos that has been cultivated by local vintners over the last few decades. Some of the hundreds who attended what Zacherle hopes will be an annual festival may not know the history or the local nature of the ingredients, but they certainly seemed to have a good time.

“Cold beer, excellent food and music, at a perfect location on a hot day – what could be better!” Zacherle said, quickly adding with a glass of beer thrust into the air, “Let’s do this again.”