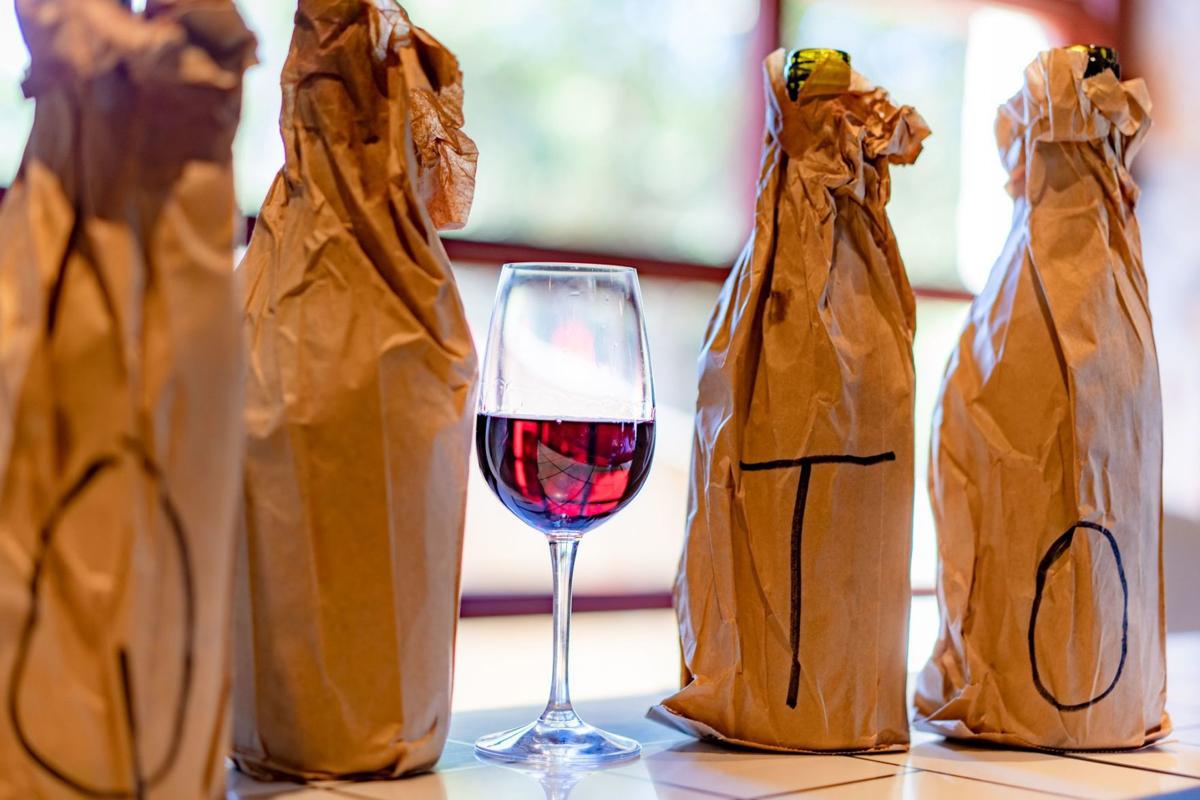 As always, the wines tasted, judged and ranked are covered in brown paper bags. The Star/NVV tasting panel recently sampled and judged 19 Napa Valley Pinot Noirs, from the 2015 to 2018 vintages. 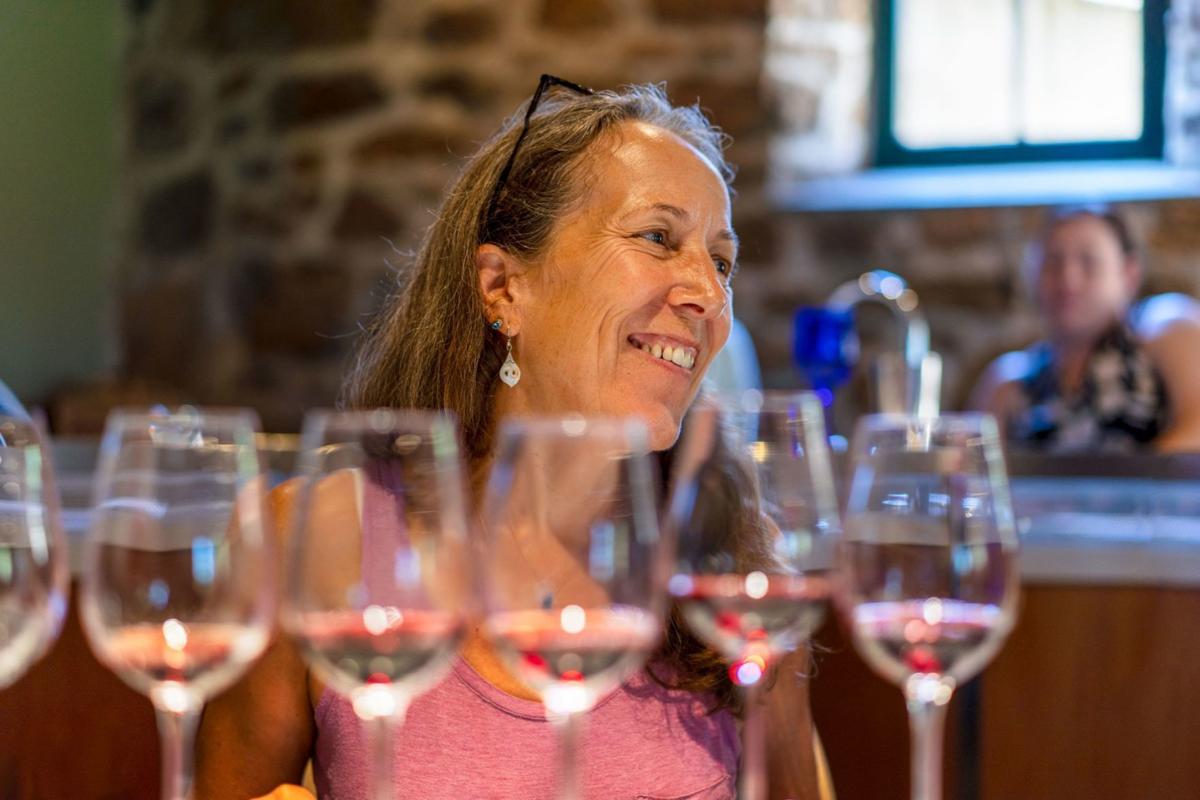 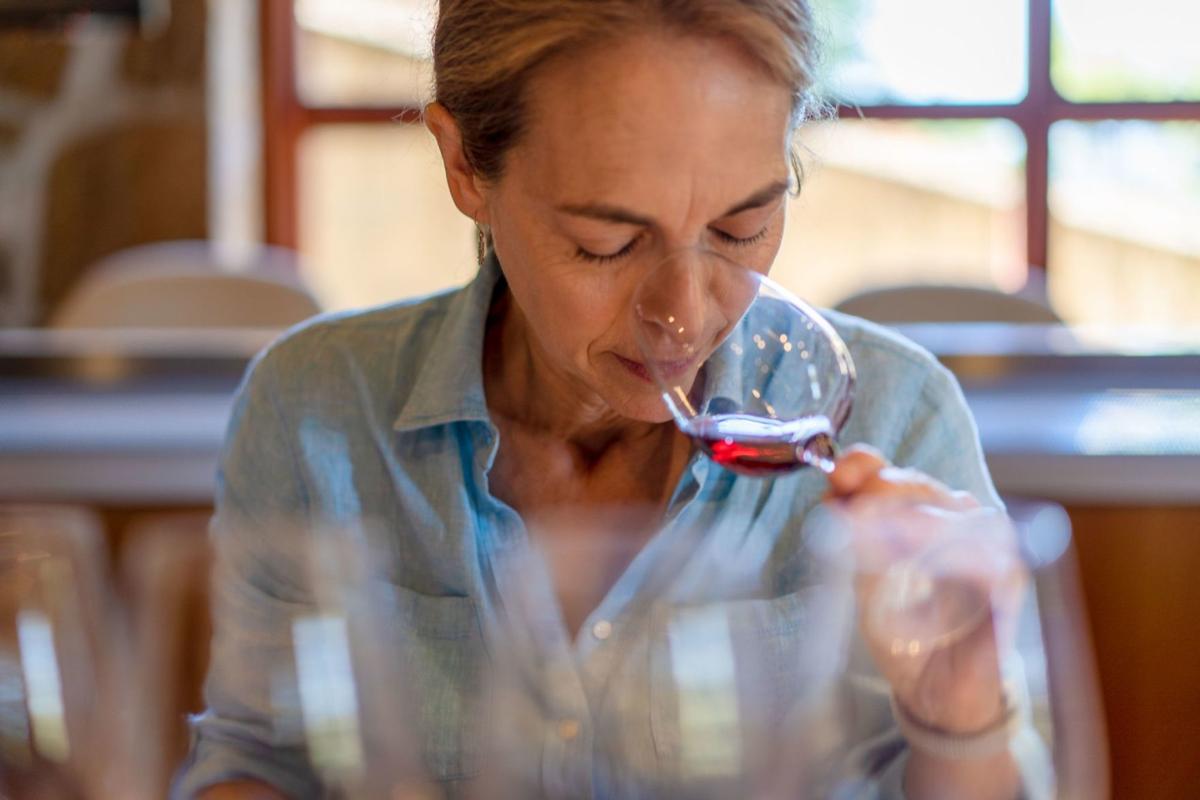 Ana Scofield tastes a glass of Pinot Noir as part of the St. Helena Star/Napa Valley Vintners Tasting Panel, held in the Rudd Center at the Culinary Institute of America at Greystone. 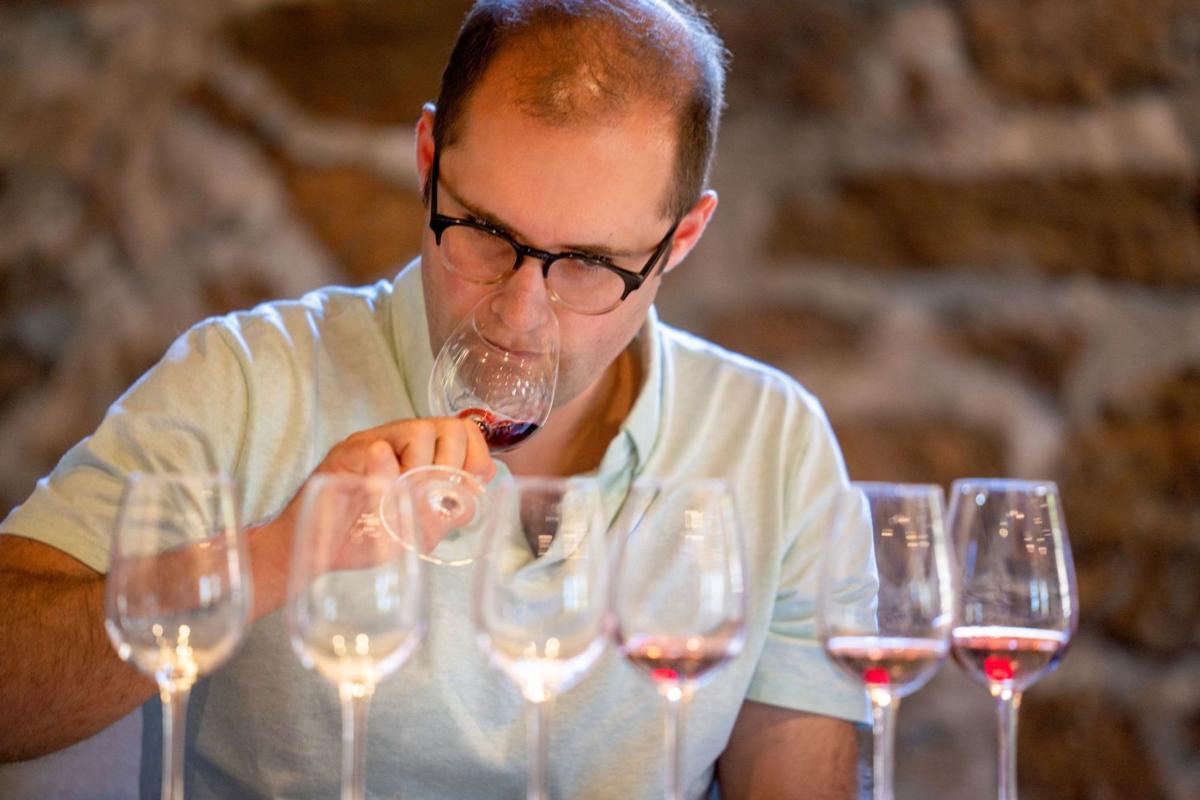 Jesse Ramer is member and education manager for the Napa Valley Vintners. 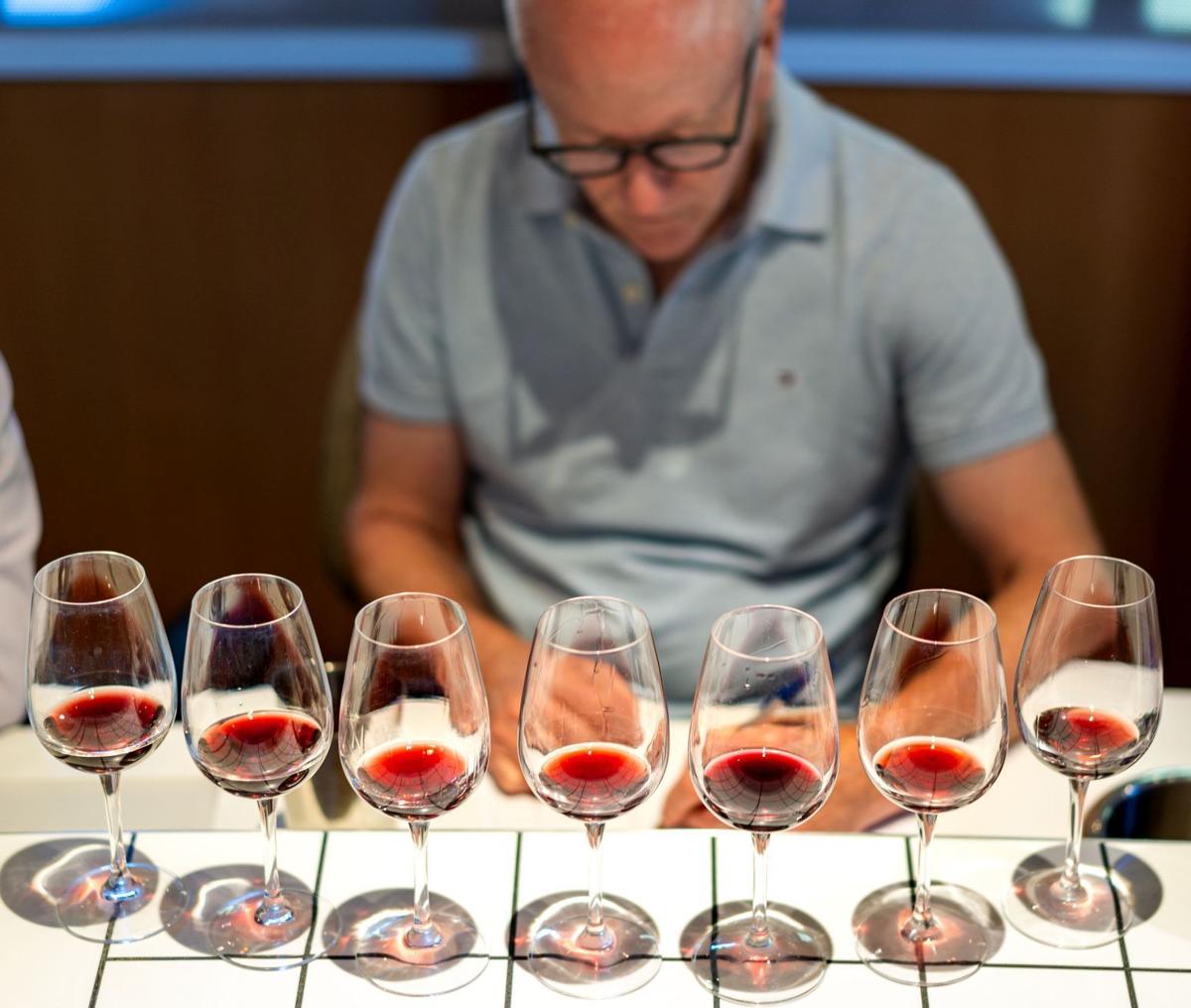 With samples of seven 2016 Napa Valley Pinot Noirs in front of him, Joel Aiken writes down his scores of the flight. Winning the flight was Baldacci Family Vineyards from Carneros. 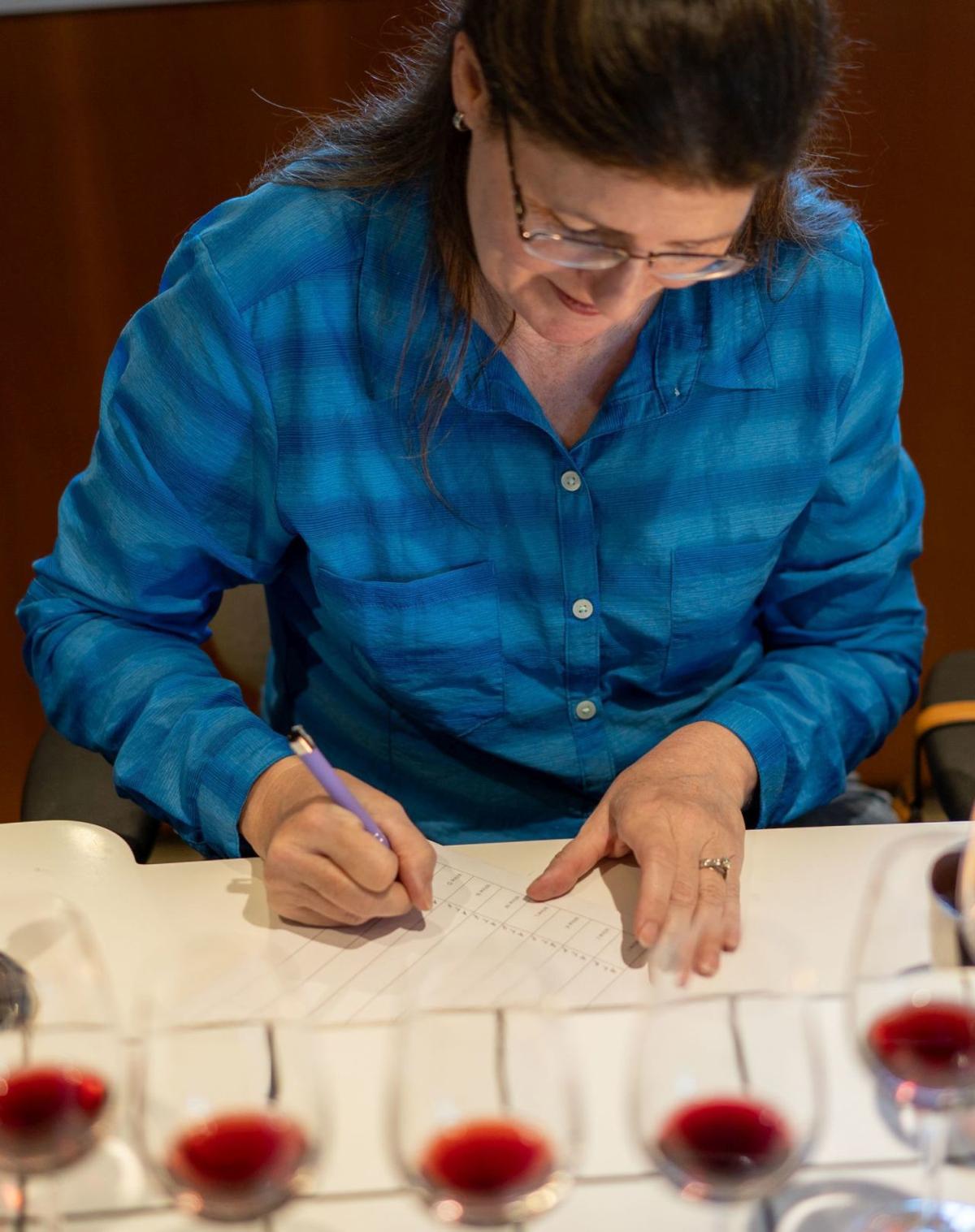 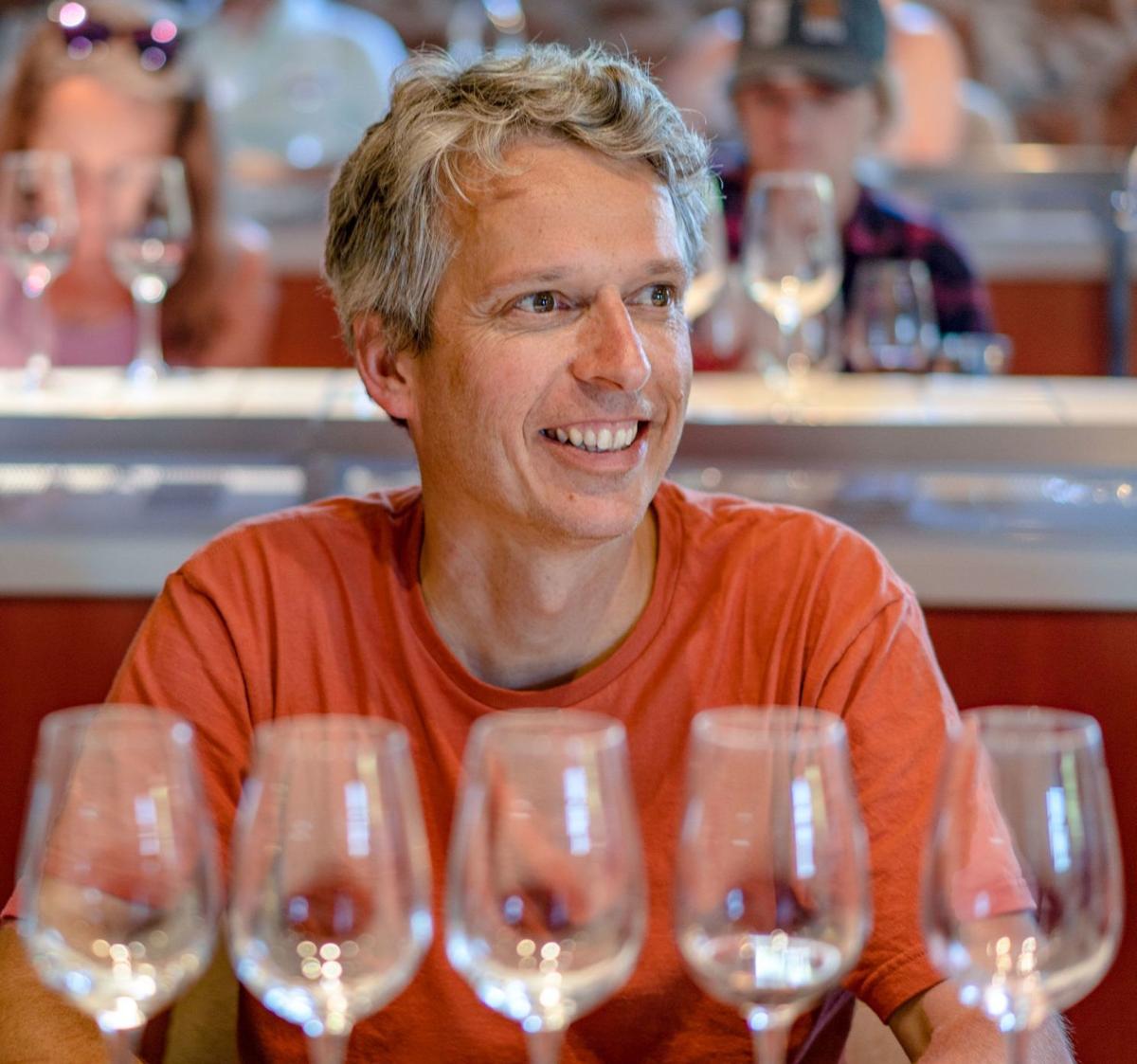 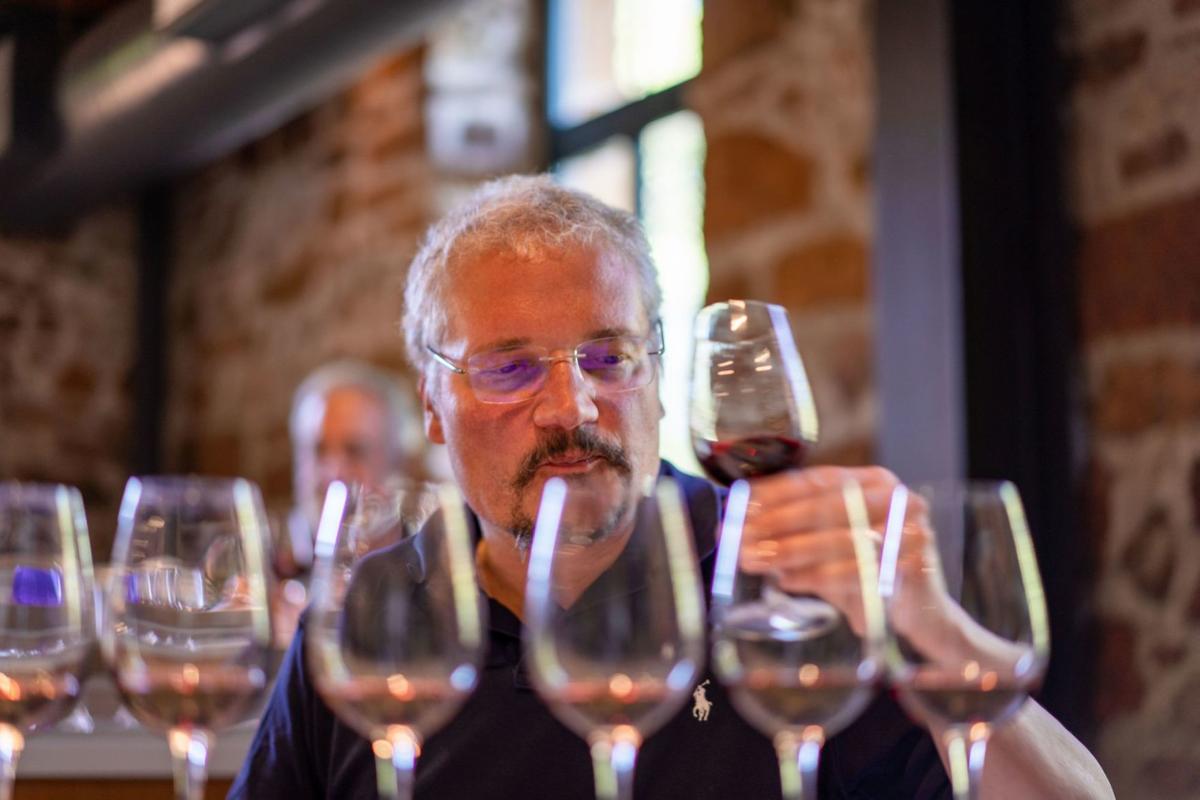 When you pour a glass of Napa Valley Pinot Noir, you should know what you’re getting: massive, heavily structured wine with few of the delicate floral characteristics of a coastal Pinot.

Panelists sampled 19 wines in a blind tasting held Aug. 15 at the Rudd Center at the Culinary Institute of America at Greystone.

“If you like a big, structured Pinot, come to Napa,” said Chris Phelps, winemaker for Ad Vivum and Inglenook. “It’ll have a little more alcohol and maybe be a little sweeter.”

Pinot Noir was the third most popular grape in Napa County last year, behind Cabernet Sauvignon and Merlot. According to the 2018 Napa County Crop Report, there were 2,821 acres of Pinot Noir planted and 11,045 tons were harvested. The price per ton for Pinot Noir grapes dropped slightly in the past year, from $2,798 in 2017 to $2,707 last year.

Even though they were sourced primarily from the Carneros region, which is exposed to some of the cool coastal breezes that help Pinot Noir thrive, the wines featured at the tasting still reflected the higher temperatures of the Napa Valley, with more tannins and higher alcohol than the layered, subtle Pinots sourced from cooler climes like Mendocino and Sonoma. Alcohol in the wines ranged from 13.45 to 15.1% by volume, with most around 14%.

Panelists also attributed some of those characteristics to stylistic choices by Napa Valley winemakers who are accustomed to heavy-duty Cabernet Sauvignons and Zinfandels.

Just as the Pinots of Oregon or the Santa Rita Hills share certain regional characteristics, “There is a congruent flavor profile that runs through all of these wines,” said Kristin Belair, winemaker at Honig. “They’re not as delicate, but there is a similar fruit character.”

Despite those similarities, consulting winemaker Julie Lumgair noted a “diversity of styles” based on three choices made during the wine-making process: oak/fruit balance, stem inclusion during fermentation, and dry vs. sugary.

Carneros Pinots are never going to display as many bold cherry, spice and pepper flavors as Pinots grown closer to the coast because of differences in climate and soil types, “but I don’t think it’s a case of better or worse,” Lumgair said.

“It comes down to what someone’s looking to enjoy,” she said.

Panelists tasted wines from the 2015, 2016, 2017, and one from 2018 vintages. They noted that the newer wines tend to have more sugar, another characteristic that sets Napa Valley Pinots apart.

As for ageability, a few wines were already showing signs of oxidation, said Alan Viader of Viader Vineyards. Winemaker Tom Rinaldi said Napa Valley Pinots would be best enjoyed within five or six years of their harvest year.

Rinaldi also offered the bluntest assessment of how a changing climate could affect the long-term prospects of Napa Valley Pinot Noir.

“We’re getting warmer and warmer here,” he said. “It’s an evolution that, to me, is going to eventually push (Pinot Noir) away to the coast or somewhere cooler.”

The 2015 Hyde Estate Winery Pinot Noir ($70) is intense and complex with deep aromas of dark cherry, blackberry, plum, spice and earthy notes. On the palate, it is rich and powerful capturing an elegant style while offering tiers of dark berry flavors and soft tannins.

The 2016 Baldacci Family Vineyards Elizabeth Pinot Noir ($50) is marked by concentrated flavors and strength. Our hallmark dark berry fruit aromas and flavors have a richness and structure this year, that makes this Pinot Noir stand tall. It pairs perfectly with grilled lamb chop or savory stuffed mushrooms.

The 2016 Clos Du Val Estate Pinot Noir, Carneros ($38) is brilliant red in color with great clarity. The complex nose leads to bold flavors of red fruits, including bright cherry with a round flavor palate. With a rich mouthfeel, the wine displays a long velvety finish.

The 2017 Ancien Wines Pinot Noir from the Mink Vineyard ($55) is a juicy blend of blueberry and pomegranate, softened by fine tannins. The Mink Vineyard is located next door to the winery in Coombsville.

The 2017 Castello di Amorosa Pinot Noir from Los Carneros ($42) has fruit-forward aromas of red-cherries, which are balanced by savory notes of mushroom and baking spices from aging in French oak barrels.

Bright ruby in color, the 2017 Frank Family Vineyards Carneros Pinot Noir ($38) is floral and lively with a beautiful exploration of lavender, red cherry and cinnamon. Soft and juicy, it has a full-bodied figure of ripeness with polished tannins and structured acidity.

The 2017 Saintsbury Pinot Noir from the Lee Vineyard in Carneros ($68) opens with plum and briar with sweet cola and nutmeg notes. Succulent dark cherry and black plum dominate on the palate with layers of cigar tobacco and cardamom. Gorgeous acidity and depth.

Editor’s note: Only wines from Napa Valley Vintners member wineries are accepted and tasted. Many wineries offer local residents discounts on their wines through the Napa Neighbor program, visit napavintners.com/programs and click on Napa Neighbor to learn more.

CALISTOGA — Larkmead Vineyards, celebrating its 125th anniversary in 2020, is planting a research block to prepare for the next 125 years of N…

In an exciting turn of events Saturday evening, two competing bidders were each declared winners of a week’s stay in Tuscany, thus doubling th…

Temperatures have cooled down after a brief heat spike, and harvest continues at a steady pace as some growers plan to pick Cabernet Sauvignon…

Harvest continues at full steam amid wild oscillations in temperature.

As always, the wines tasted, judged and ranked are covered in brown paper bags. The Star/NVV tasting panel recently sampled and judged 19 Napa Valley Pinot Noirs, from the 2015 to 2018 vintages.

Ana Scofield tastes a glass of Pinot Noir as part of the St. Helena Star/Napa Valley Vintners Tasting Panel, held in the Rudd Center at the Culinary Institute of America at Greystone.

Jesse Ramer is member and education manager for the Napa Valley Vintners.

With samples of seven 2016 Napa Valley Pinot Noirs in front of him, Joel Aiken writes down his scores of the flight. Winning the flight was Baldacci Family Vineyards from Carneros.