Become a Member
Read Today's E-edition
Share This
Review: St. Helena Drama’s ‘Newsies’ is lovely and delightful
Share this
1 of 2 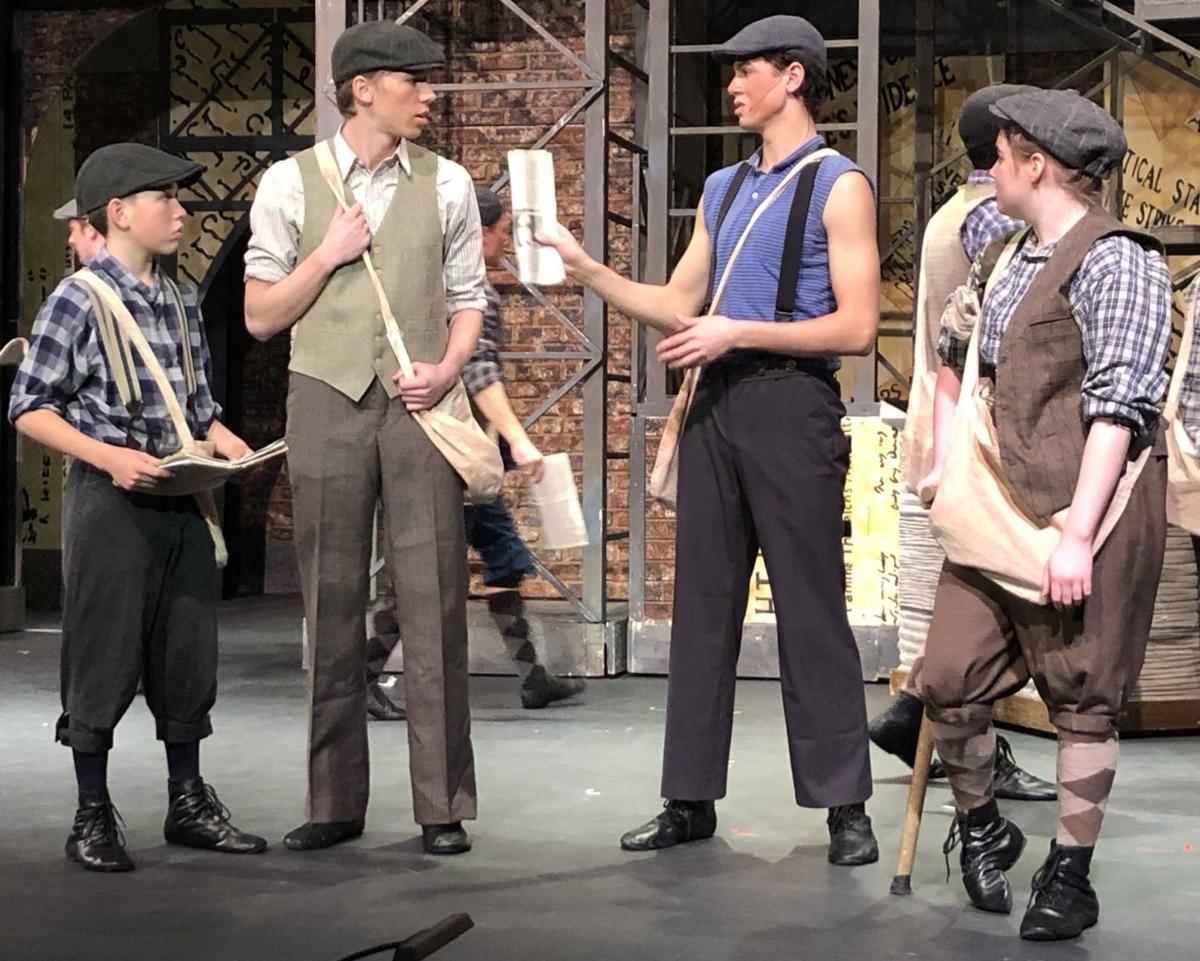 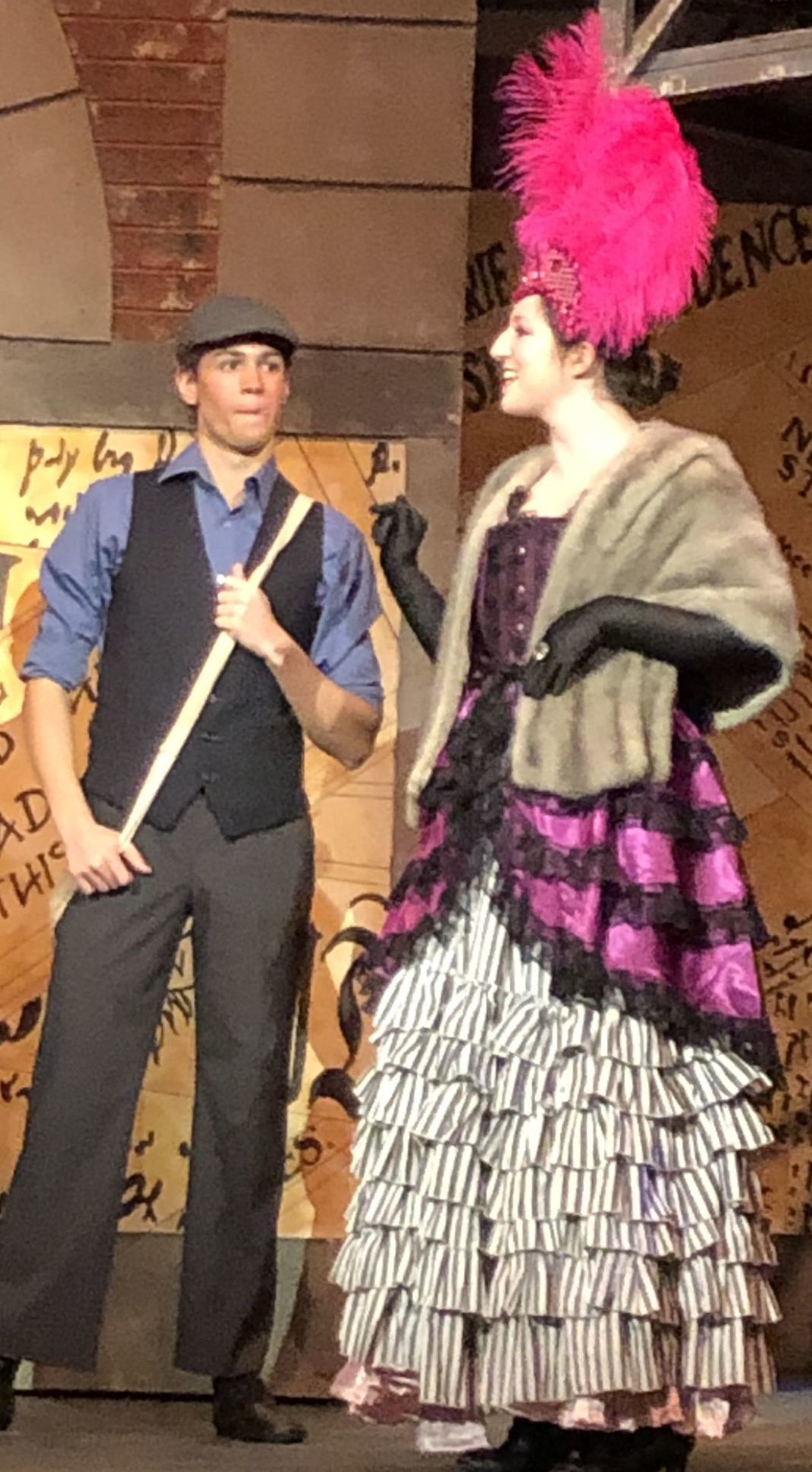 For a small drama department in a small town, “Newsies” at St. Helena High School was lovely. With an elaborate set, extensive costumes and an ensemble of heartfelt singers and dancers, it was a delightful afternoon of live musical theater.

The “newsies” were the street urchins, orphans and ruffians who hocked newspapers on the street corners in turn of the century New York. They worked for Joseph Pulitzer, the famous newspaper owner, played by a gleefully evil Caleb Jeske with a lockjaw accent. Pulitzer, faced with declining circulation decides to raise the prices he charges the newsies to sell the papers in order to compensate for his falling profits.

This is especially cruel because the way the newsies make money is based on the difference between what they pay Pulitzer, and what they sell them for on the street. When Pulitzer announces the price increase, the newsies revolt by striking — getting together and all of them refusing to sell the paper. The story of the strike is the plot of the show.

In real life, the strike was led by someone named Kid Blink. But he was promptly discredited by the newsies when they found out he had taken a bribe from the newspaper executives, though he denied the claims.

In the show, they are led by Jack Kelly, played, with a perfected Brooklyn accent, by Sam Smiley. (Patti Coyle, who directed the show, said that getting 25 kids from Napa County to do a Brooklyn accent was a very interesting experience.) Sam is tall, thin, with ruddy cheeks and a trustworthy and conscientious air. He is the one all the newsies look up to. Like Kid Blink, Jack is offered a bribe by Pulitzer to call off the strike, but that is where the show diverges from the history.

The weird thing is that there is no mention, either in the play or in the history, of the newsies just charging more per paper to make up the difference of the price increase. That is the way things would work now. Maybe the price was completely elastic — no one would pay more than the going rate for a paper. Or, perhaps the price was set by the newspaper itself, which would be even more evil of Pulitzer and Hearst, as if they needed help. Either way, if that had happened, there would be no lovely afternoon of musical theater.

And, oh, lovely it was. The cast of 37 high school students sang and danced their hearts out. There was coordinated stomping, fist pumping, knee slapping, jumps, flips, rolls — every conceivable pose conveying defiance, pluck and a youthful energetic happiness, all accompanied by a live 14-piece orchestra, led by Craig Bond. When the ensemble was lined up on stage, their voices at full throttle, no audience member’s pulse was at baseline.

Emma Pierce was Medda Larkin, a burlesque singer and owner of a theater in which Jack paints the scenery. Pierce sings Medda’s song “That’s Rich” alone on stage, coy and clever, with just the right amount of lugubrious feminine sarcasm expected of a lady of questionable repute. Medda is maternal to Jack, offering to pay him for his work on the sets, but Jack refuses payment, ever the selfless martyr. She also loans him the use of her theater so that he can stage a rally where the newsies can come together. The rally is based on the one that actually happened in July 1899 at Irving Hall in New York City.

The costumes were a thing to behold. Pulitzer’s black waistcoat, brocade vest and period tie were perfect. As were Pulitzer’s secretaries in high-waisted, ankle-length skirts and poofy-sleeved, high-necked blouses. Getting 25 or so different-sized knee shorts, high socks, frumpy shirts and canvas satchels to outfit the poverty-stricken newsies must have been quite a chore. Not to mention the many pairs of tap-dancing shoes for the cast in the middle of act two. And don’t forget Medda Larkin’s frilly pink satin bustier, majestic pink headdress and mink stole that she wore, using elegant, but ginger steps.

The set was extensive. It was composed of two double-level rolling scaffolds, which flanked a stone arch, which was ubiquitous in turn-of-the-century New York. In each scene, the crew would wheel the scaffolds around, almost effortlessly, and at one point, a crewmember turned the scaffold around as Jack was ascending the spiral staircase to the top, while keeping him in the spotlight. It was beautiful.

The rights to the show also came with animations that were projected onto the set at scene changes. They showed pictures of newspaper headlines, in turn-of-the-century style, and colorful scenes of the brick tenement buildings — the kind the newsies would have lived in, if they had homes.

And, I was amazed when at the climax of the show, they actually rolled out a 19th-century printing press that actually worked! They were literally printing the paper they were talking about, on stage during the play.

All in all, “Newsies” was yet another beautifully staged, professional show, produced by a little theater company in a little town. Patti Coyle and the Drama Department at St. Helena High School consistently impress. I can’t wait to see what they do next.

“Newsies” at the St. Helena High School Performing Arts Center has three shows left. Friday, March 13 and Saturday, March 14 at 7 p.m. and 2 p.m., Sunday, March 15. Tickets are $10 to $20 and can be purchased at sthelenadrama.com.

John Henry Martin wishes he was young enough to be in Patti Coyle’s drama class. If you do too, email him at jhm@johnhenrymartin.com.

Upcoming events in Calistoga and Napa Valley the week of March 12.

Blues vocalist and guitarist Alvon Johnson will perform at the Tucker Farm Center in Calistoga on Saturday, March 21.

The Taste of Yountville has been canceled, but related smaller events with Yountville Live will continue.

The World in a Glass: Tasting history at Charles Krug