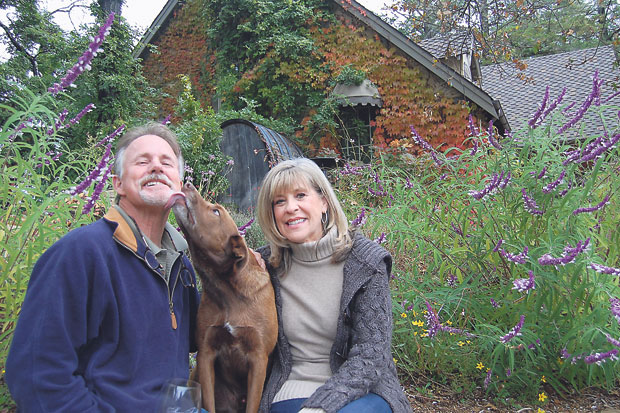 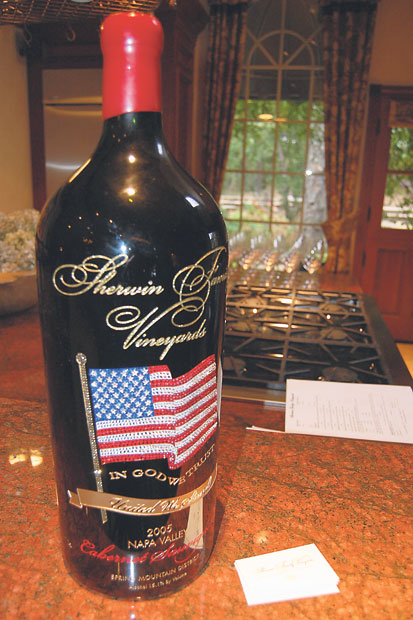 American patriotism was in full force after the 9/11 attack on New York’s twin towers when Steve and Linda Sherwin, owners of Sherwin Family Vineyards on Spring Mountain, received exclusive U.S. government approval for a wine bottle bearing an etching of the American flag. John Lindblom photo

Like most Americans, 9/11 is forever etched in the minds of Steve and Linda Sherwin. But 10 years ago, the owners of Sherwin Family Vineyards on Spring Mountain took their patriotism to loftier heights with the etching of the American flag as a logo on a wine bottle.

“In the wine world, we are the home of the patriotic pour,” Steve said with a grin of satisfaction as he relaxed for a rare moment at the family’s vine-covered winery.

Steve and Linda have a good reason to be content with themselves. A couple of reasons, actually.

First, theirs is the only wine bottle logo approved by the government to bear an imprint of the Stars and Stripes. Second, submitted to bids at virtually all of the Napa Valley’s wine auctions and finest restaurants, the etched bottles of wine have raised an untold amount for the 9/11 Family Disaster Fund. Not long after the terrorist attack on the twin towers, one bottle was gaveled at $20,000.

“It’s been our way of giving back,” Linda said. “We feel if we can donate the bottles and raise some money, that’s good.”

Getting approval from the Bureau of Alcohol, Tobacco and Firearms for the American flag on the bottle was a tricky maneuver through the morass of red tape governing such things. A coup, if you will.

The flag idea struck Steve during a conversation with Roxanne Prager of Prager Winery and Port Works concerning a benefit the Italians were planning to aid 9/11 families at Lake Garda, Italy. There would be an auction in which 50 wineries in Italy and the Napa Valley would put bottles up for bid in pairs.

“So I thought, instead of sending a regular bottle to represent us in Italy, I wanted to dress her [the wine bottle] up for the party,” Steve said. “I told Roxanne, ‘Let’s etch the American flag on it and put a little tribute on the back.’ So we did and sent it over. It worked so well at the auction, I thought, ‘I’m going to make some more of these.’”

But Linda, mindful of the approvals that Steve seemed to be overlooking, cautioned him, “You better make sure that’s OK.”

Steve thought he’d take care of that formality by calling the Wine Institute in Washington, of which the Sherwins are members. The institute operative at the other end of the line told him there was “absolutely no way they’re going to approve the American flag on a wine bottle, period!”

Not one to take no for an answer, Steve persisted, calling the same spokesperson a couple of days later to ask if there wasn’t “a gray area where we can get around this?” Whereupon he was instructed to “send a prototype bottle back to Washington and we’ll walk it across the street to the Bureau of Alcohol, Tobacco and Firearms office.”

Which they did, and “Boom!” Steve recalled, “they stamped it approved.”

After that, the flag-etched bottles, which are all large-format (magnums, 3 liters and 6 liters), have turned up at numerous select places. In the Upvalley at leading restaurants such as Tra Vigne and Brix, where they were silently auctioned at the door on a two-week basis. Also to the St. Helena Wine Center. More importantly, to the Olympics, to the Calgary Stampede rodeo, to St. Helena’s sister city in Italy, and — drumroll, please — into George W. Bush’s White House. The latter was a little trick that Steve pulled off through a friend of a friend who happened to be Bush’s brother-in-law and who presented an etched bottle to the president at Camp David on Father’s Day. The move left White House security staffers scratching their heads.

By now you may have realized that Steve Sherwin is a pretty amazing guy. A native of Clayton in Contra Costa County who wearied of driving horses at his family’s ranch, he made his fortune as a builder in the Walnut Creek and Concord areas. When Steve wearied of construction in 1996, the family moved from Clayton to Spring Mountain and to the wine business. Since then, they have grown the original 2 acres of vines to where they are spread out over approximately half of the property’s total 32 acres. They maintain four vineyards, three of them bearing the names of their up-and-gone offspring: Matthew, Lindsey and Jennifer.

Their annual production of 2,000 cases encompasses cabernet sauvignon, cabernet franc and merlot, plus another 400 cases of syrah from the vineyards of a friend in Healdsburg. There is also a small production of “Cellar Scrap,” in a squat-shaped bottle so named because it is, in Steve’s words, “multi-varietal and multi-vintage.” He sells it for $55 a bottle.

“This is wine you can get real creative with,” he said. “You don’t have your hands tied like you do when you’re making estate wines with percentages of varietals.”

The man is indeed creative. He is also tireless.

But one kind of wonders, what do you do with a large bottle of wine with our nation’s flag etched into it? Drink it or salute it?

American patriotism was in full force after the 9/11 attack on New York’s twin towers when Steve and Linda Sherwin, owners of Sherwin Family Vineyards on Spring Mountain, received exclusive U.S. government approval for a wine bottle bearing an etching of the American flag. John Lindblom photo