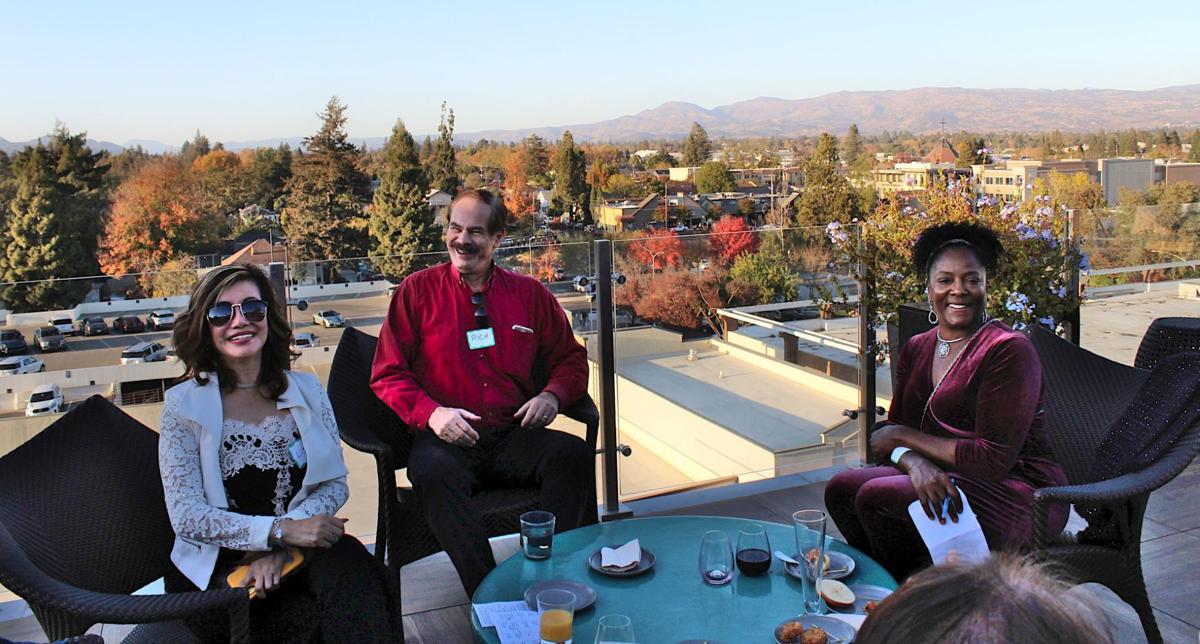 Singles play a mixer game to break the ice at an event on the rooftop of the Archer Hotel Nov. 23. 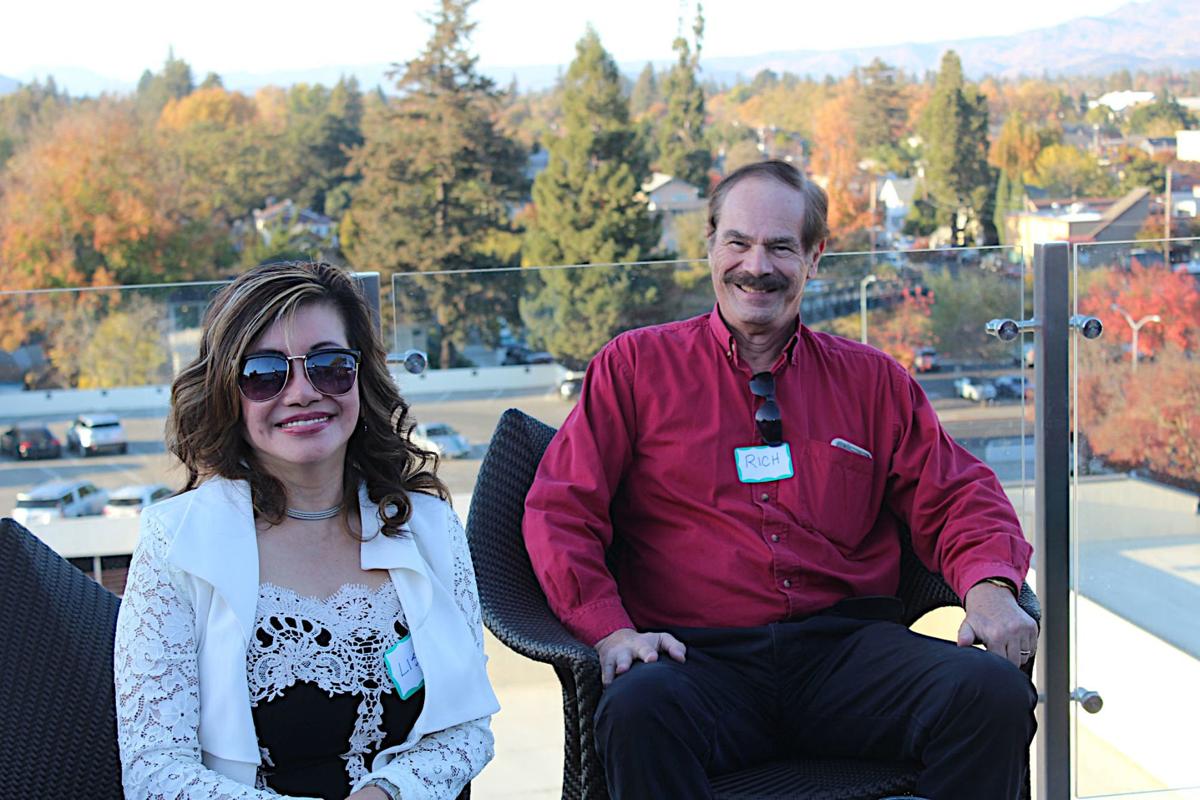 Singles participant Lisa Lawrence and Rich Gosse, chairman of The Society of Single Professionals, on the rooftop of the Archer Hotel in Napa during a singles event Nov. 23.

Sometimes it’s satisfying when your personal, biased, and unscientific conclusions are confirmed by an expert. Then again, sometimes not.

For instance, one of the world’s leading singles experts recently stated matter-of-factly that the dating scene in Napa Valley is not just tough, as many singles will agree, but “deadly.”

With all this good food and wine, one would think Napa Valley would be fertile dating ground, but “Napa Valley is the graveyard for singles groups,” said Rich Gosse, chairman of the Society of Single Professionals, billed as the world’s largest nonprofit singles organization. “People have tried to do singles groups over the years … they all died out. Napa will not support a singles group.”

Unfortunately, Gosse would know. He has hosted singles meetups with more than 2,000 parties on six continents. He was in Napa on Nov. 23, and hosted one of his events for singles at the scenic outdoor lounge atop the Archer Hotel in Napa.

The last time Gosse held a singles event here was about three years ago but, ever the hopeful romantic, he was back to try again, and also to raise funds for his organization, seva.org, which provides cataract surgeries in developing countries.

About 50 singles came from near and far, including Napa, Sonoma, Concord, San Francisco, and Walnut Creek. The Archer donated the venue and plenty of appetizers, and the view from the rooftop provided a convivial environment.

One woman from Walnut Creek, who gave her name only as Karen, said it’s easier to meet men in Walnut Creek. There are more casual venues that have live music, and men actually ask you to dance, she said.

“Walnut Creek is much better for singles,” Gosse agreed, but again, without much reason as to why.

Gosse said he tried to set up a singles group to meet every Tuesday night at a local hotel but had to cancel due to poor attendance.

So why is Napa such a black hole for singles?

“You’ll have to tell me,” he said. “I’ve done parties all over the world, and Napa is just dead for singles.”

As comfort, perhaps, he did offer that the situation might be bad in Napa, but things are worse in San Francisco and New York City, at least for women. There, they apparently outnumber men in crazy ratios with lots of zeros. Indeed, if one scratches the surface, the case can be made that dating is tough all over. So ...

Where to meet people

The number one question Gosse said he gets is “Where can I go and meet somebody nice?”

Online dating — where you have 20 million people to choose from — is an option, but Gosse believes the “old-fashioned” way is the best way to meet people. Many years ago, he met his wife at one of his events.

“But if you don’t have a singles scene, what do you do? Especially if you’re older?”

The crowd at the Archer was mostly middle-aged, which is not uncommon with these events, Gosse said. When you’re younger, if the other person is cute you’ll pretty much go out with them. But as you get older, you find out there is more to a relationship than physical appearance.

“If you’re over 40, you can’t go to some nightclub where everyone is in their 20s. You’re going to feel awkward,” Gosse said.

So, how does one get over feeling awkward, and the fear of rejection?

Gosse said he lectures on that very topic, and here is his secret: “You have to go out and get rejected. In psychology they call this ‘desensitization.’”

The theory goes, that which doesn’t kill you makes you stronger, or at least less sensitive.

So, Gosse said, go to a party with a rule to get rejected multiple times. “Each time you get rejected reward yourself a purple star, because you’ve been wounded in the battle for love.”

Some singles fear being preyed on by “gold-diggers,” those just looking for a free ride, or worse.

“You have to spend time with people and get to know them because there are gold-diggers out there,” Gosse warned.

But really, you don’t have to have a special opening line.

“Some people think there is a magical opening line so they won’t be rejected. But all opening lines are dangerous. You’re going to get rejected a certain percentage of the time, so you just have to say something,” Gosse said.

According to an informal street survey by Los Angeles Magazine, the No. 1 opening line there was “Hi.”

“I don’t know if that would work in Napa,” Gosse said. “But you don’t have to be clever or funny or original, you just have to say ‘Hi.’”

Gosse’s singles events raise money for The Seva Foundation in Berkeley to restore sight to the blind. All proceeds are donated. Cost to attend the Napa event was $10, and every $50 raised finances a cataract surgery for a blind person in one of the poor countries of the world. Seva has performed 3 million cataract surgeries to date.

Holidays in Napa Valley: A roundup of entertainment and activities

Upcoming events in Calistoga and Napa Valley the week of Nov. 14.

Singles play a mixer game to break the ice at an event on the rooftop of the Archer Hotel Nov. 23.

Singles participant Lisa Lawrence and Rich Gosse, chairman of The Society of Single Professionals, on the rooftop of the Archer Hotel in Napa during a singles event Nov. 23.