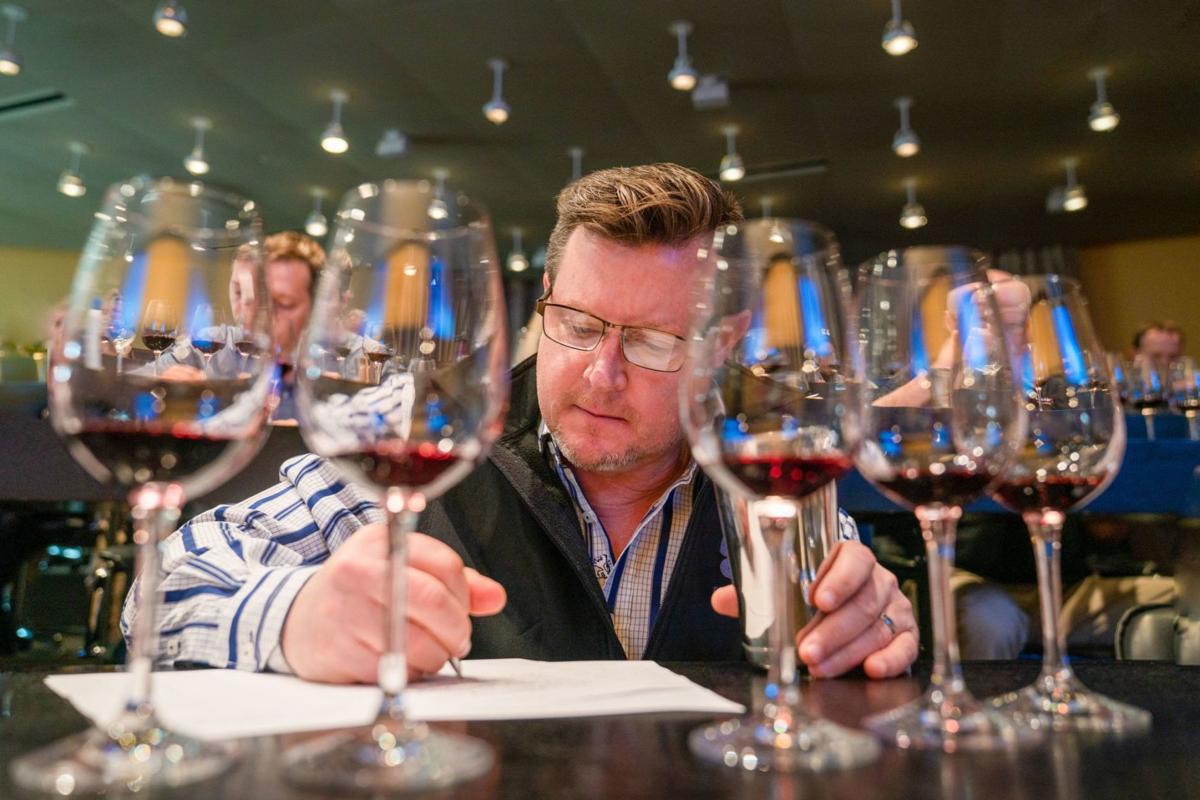 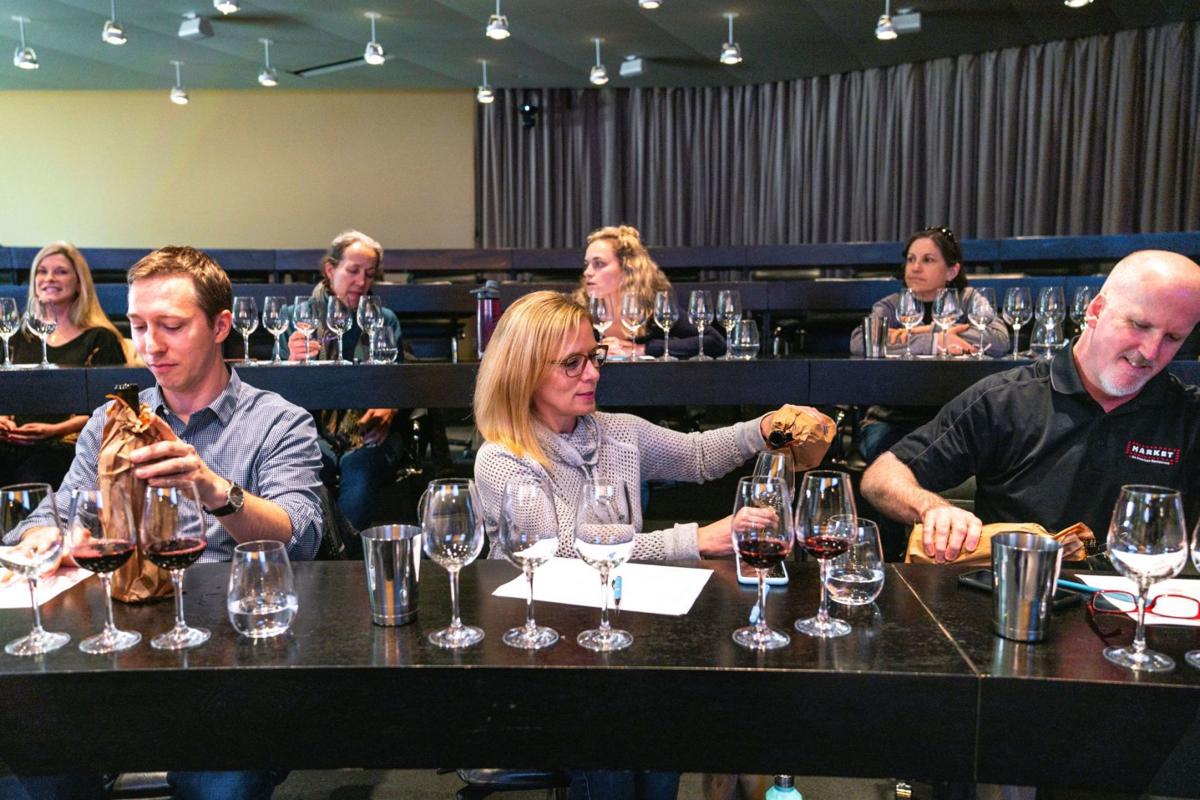 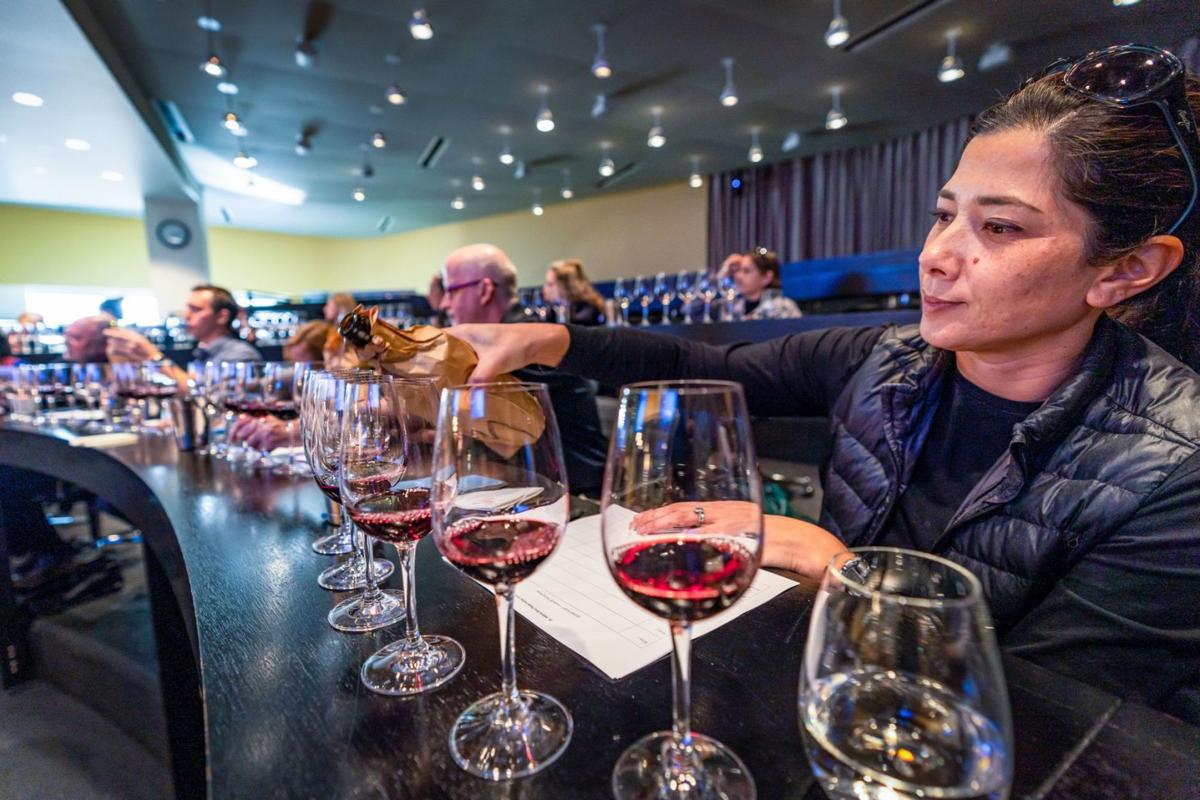 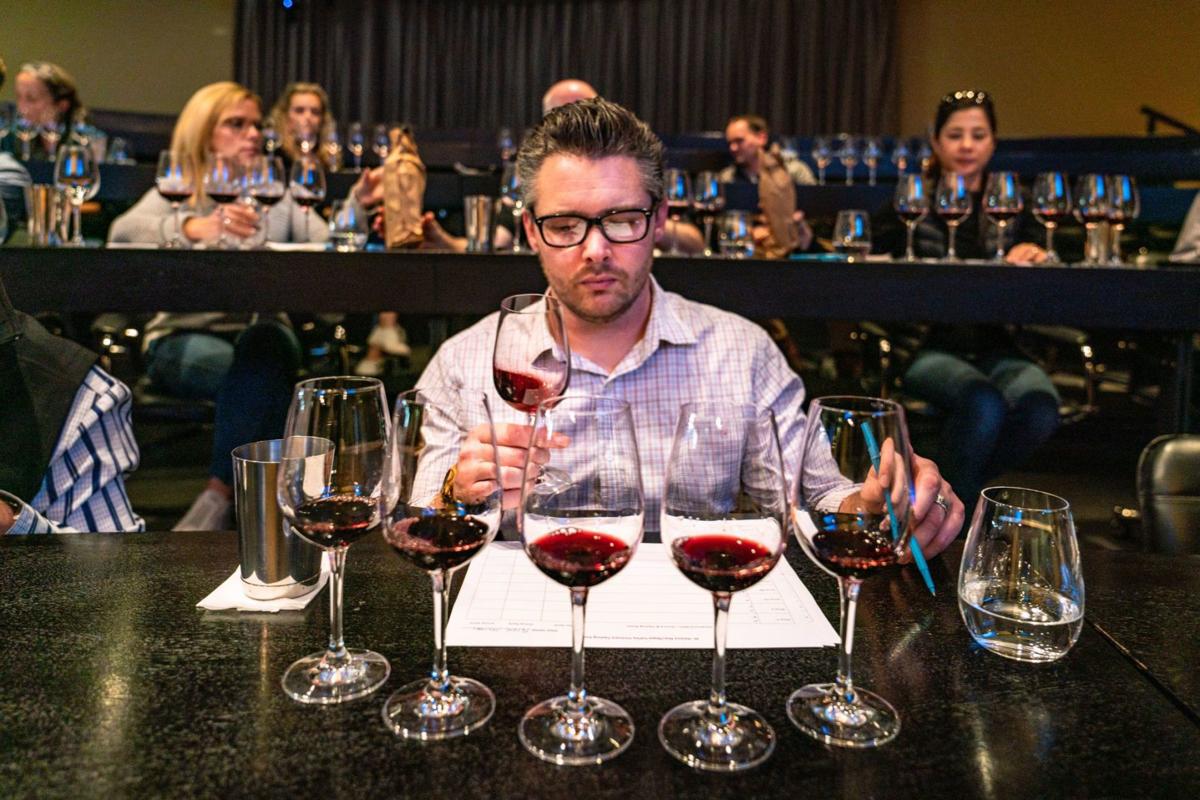 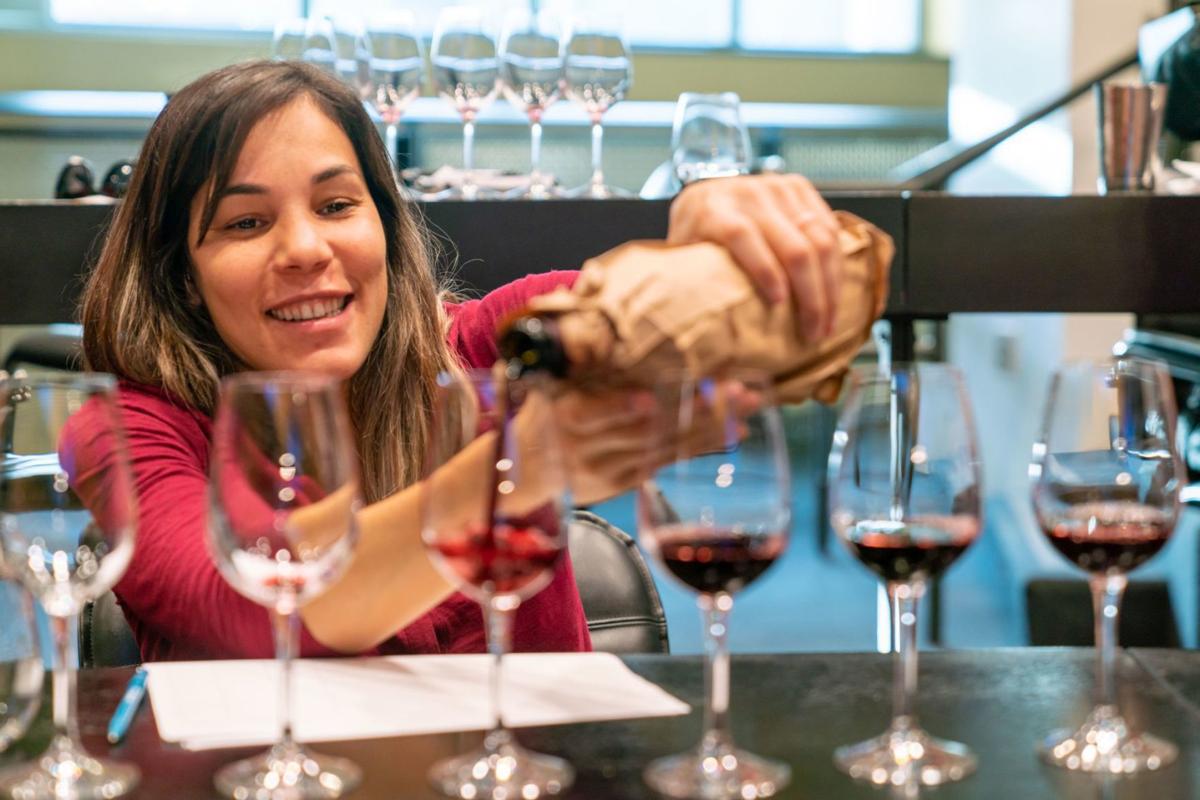 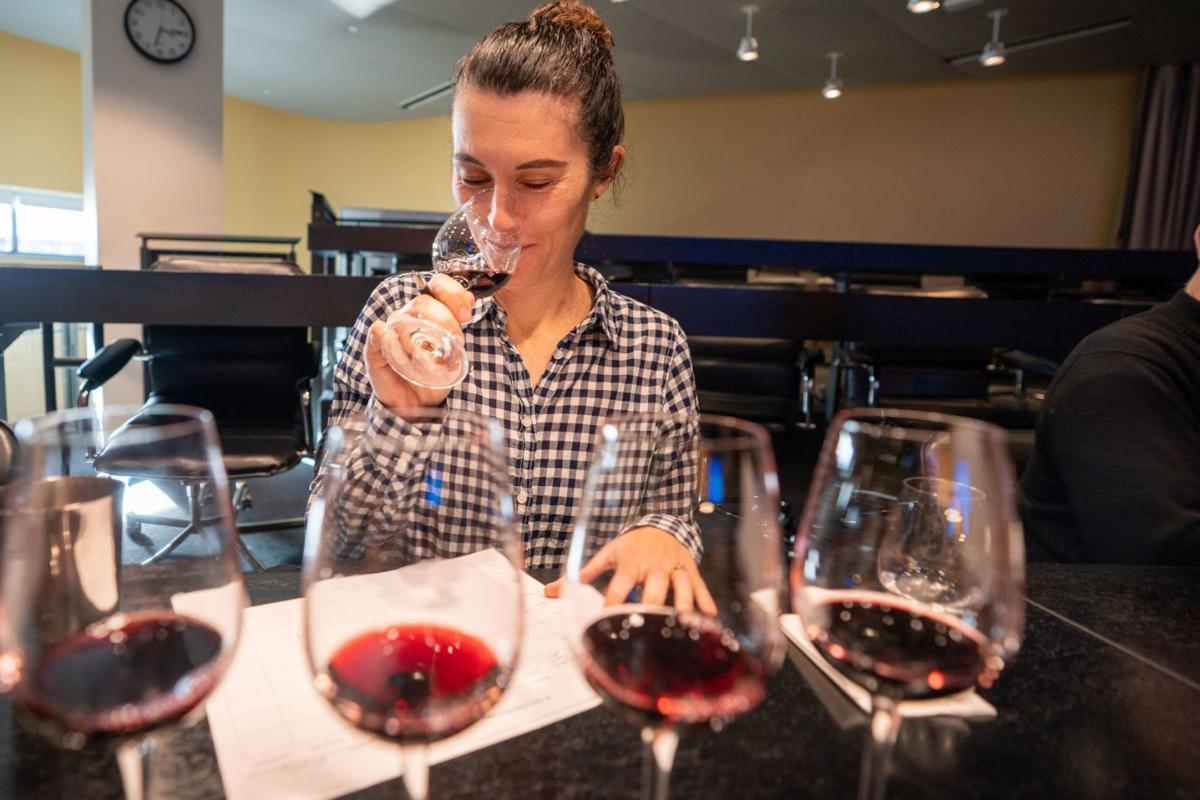 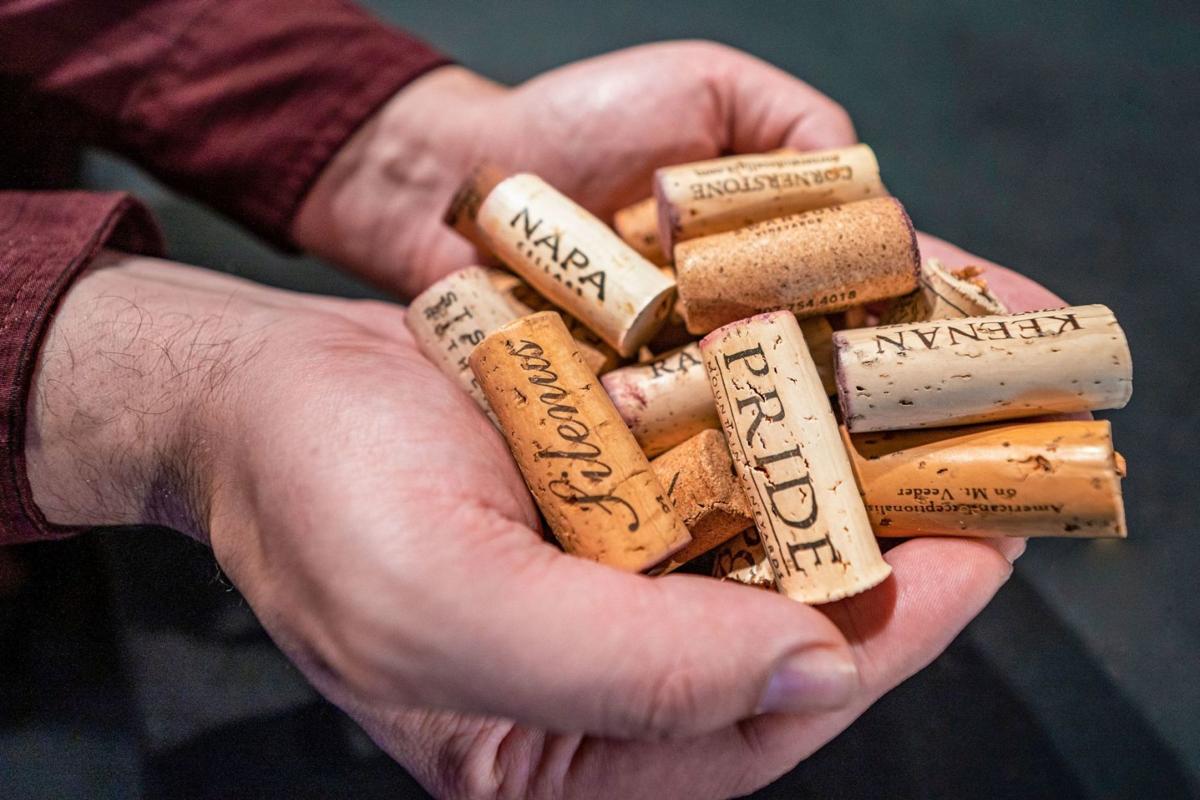 A sampling of the corks collected following a tasting of Napa Valley Merlots by the St. Helena Star/Napa Valley Vintners Tasting Panel.

Merlot has always been a serious wine choice in the Napa Valley.

Whatever fads or movies move the popularity trigger of Merlot around the country, a steady hand has been rewarded here to those vintners who quietly and continuously pursuing Merlot’s greatness. Napa Valley never had the plantings, nor — more importantly — the resolve to produce large quantities of mediocre Merlot, as was the fate in many regions around California during the grape’s manic heyday.

We did finally own up to the fact that we were trying to turn our Merlots into Cabernet Sauvignons; aggressively extracting color and tannin and dressing them up in heavy oak. But Merlot wines are not naturally as tannic or as deeply colored as Cabernet Sauvignon, and nor should they be. Merlot’s magic lies elsewhere. Lookalikes are just that — wines trying to be something they are not and ending up as the booby prize in the end.

Luckily, we started to let our Merlots be, well, Merlot. What the grape variety has, and other grapes contort and bend in a mighty game of cellar Twister to achieve, is a naturally rich texture that sends ribbons of fresh fruit across the palate in a silky wave. The firm shoulders of some Cabernet Sauvignon wines are all the better for a touch of supple-bodied Merlot.

One of the most sought-after wines in the world (Pomerol’s Petrus) is made entirely from Merlot, vintner Doug Fletcher noted during a recent St. Helena Star/Napa Valley Vintners Tasting Panel session on current vintages of Napa Valley Merlot, held at the Culinary Institute of America at Copia in Napa. Napa Valley Merlots have been named Wine of the Year by Wine Spectator numerous times, including those from Duckhorn and Paloma.

Hugh Davies, owner of Schramsberg and J. Davies Estate, stated, “Merlot definitely has a place here. The world is pushed into liking Cabernet Sauvignon — and Pinot Noir in second place — and forgets about some of the other varieties.”

Dr. Liz Thach, Master of Wine, noted, “The [Merlot] wines have a lot of personality and nuances,” before exclaiming to chuckles, “The prices — look at the prices! Am I in Napa Valley?” The majority of Napa Valley’s Merlots ranged between $25 and $50, with the highest price at $110.

Sarah Linnemeyer of Louis Martini, spoke of Merlot’s character, stating, “These are nice wines; they are not pyrazine-heavy. [More like] tea leaf; more reserved. I appreciate what Merlot has to offer without being overtly robust.”

Jamie Jamison, general manager and wine director of BRIX restaurant, stated that he had roughly five of the wines from the tasting on his wine list already, and after prodding by St. Helena Star editor Dave Stoneberg, mentioned that now he “would be purchasing more.”

Michael Martin, general manager of Market Restaurant in St. Helena, admitted that his wine list is Cabernet Sauvignon-heavy, but noted, “I was expecting really ripe fruit bombs, but there are some serious [Merlot] wines here.”

Jason Moulton, winemaker at Whitehall Lane, and vintner Linda Trotta of Jamieson Ranch Vineyards, discussed where Merlot is grown. Moulton pointed out that with Merlot it is “fine-tuning where it belongs.” Trotta noted that “Merlot grows well in lots of microclimates. It does well in Carneros and it does well in the mountains.”

Martin agreed, noting, “It is one of the more versatile varieties.” Merlot is generally less fickle than the later-ripening Cabernet Sauvignon; it is easier to grow and earlier to ripen.

When all is said and done, however, it comes down to taste for wine drinkers, and panelists had plenty of praise for the juicy red and black fruits, vibrant acidity, firm but not overly drying tannins, and rich expressiveness of the Merlot wines.

More than two dozen Merlot wines were tasted in a series of five flights, with the following wines taking home first-place scores:

Cornerstone Cellars 2015 Merlot Oakville ($75): Intense and enticing black cherry and black and red plum flavors are layered with toast and cinnamon spice, made even more complex by fresh and dried herbs, all lifted by bright acidity and delivered on a richly textured palate.

Rombauer Vineyards 2017 Merlot Napa Valley ($45): Dark-fruited aromatics are complimented by black pepper and dried herb spice on a Merlot enjoying both a juicy and firm-tannin palate.

Markham 2016 Merlot Napa Valley ($25): Deep ruby in color with a sweet oak entry, this wine is everything aromatically that you love about a warm cherry pie coming out of the oven, with spice notes on the finish.

Hyde Estate Winery 2016 Merlot Los Carneros ($85): Complex from the get-go, the red cherry and plum fruits are layered by herbs and sweet baking spices, and delivered on a juicy palate into a nice, lingering finish.

Other top winners of their flights:

Clos Pegase 2018 Merlot Los Carneros ($30): Dominated by sweet cherry and plum, there is a hint of intriguing citrus that lifts the flavors in this wine.

Bravante Vineyards 2014 Merlot Howell Mountain ($65): This Merlot shows off some deft winemaking with enticing red fruits and beautifully-integrated toasty-oak, all made fresh by juicy acidity in a deliciously refined example of Merlot.

Catherine Bugué, the St. Helena Star’s tasting panel writer, loves writing about — and drinking — wine. She is also the co-founder of the Napa Valley Wine Academy in Napa. You can contact Catherine at catbugue@gmail.com. Only wines from Napa Valley Vintner member wineries are accepted and tasted. Many wineries offer local residents discounts on their wines through the Napa Neighbor program, visit napavintners.com/programs and click on Napa Neighbor to learn more.

Napa Valley Cult Cabernet (it’s not what you think)

Is the average price per ton of Napa wine grapes $5,798? Experts question the state grape report.

Small Winery ordinance only helps the big ones

Letters: Supervisors once more swear their their fealty to the wealthiest wineries.

Napa Valley wineries have mastered the art of designing visitor experiences to match their wines and brands. The range of activities visitors …

A sampling of the corks collected following a tasting of Napa Valley Merlots by the St. Helena Star/Napa Valley Vintners Tasting Panel.