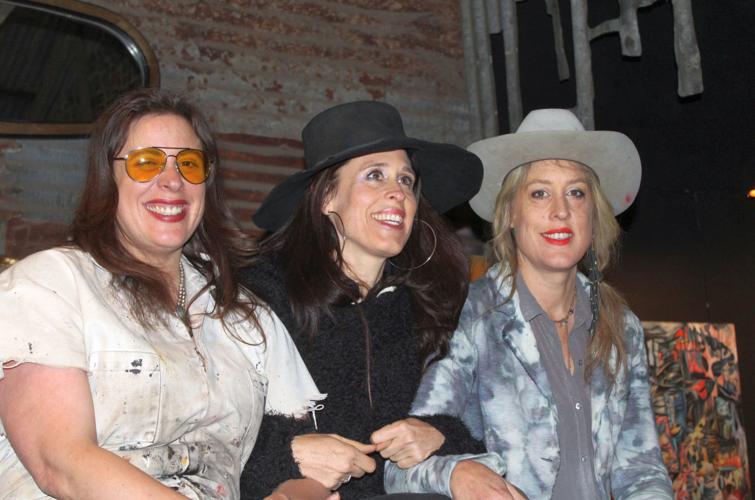 Renown artists and musicians Mercedes, Anna, and Melissa Baker at their studio Oct. 11. 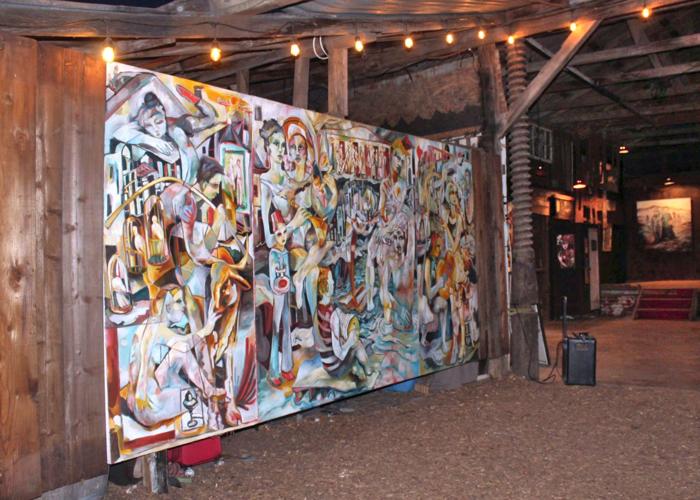 A large abstract by Melissa Baker hangs in their art studio, a 1920s converted barn on Ehlers Lane in St. Helena. 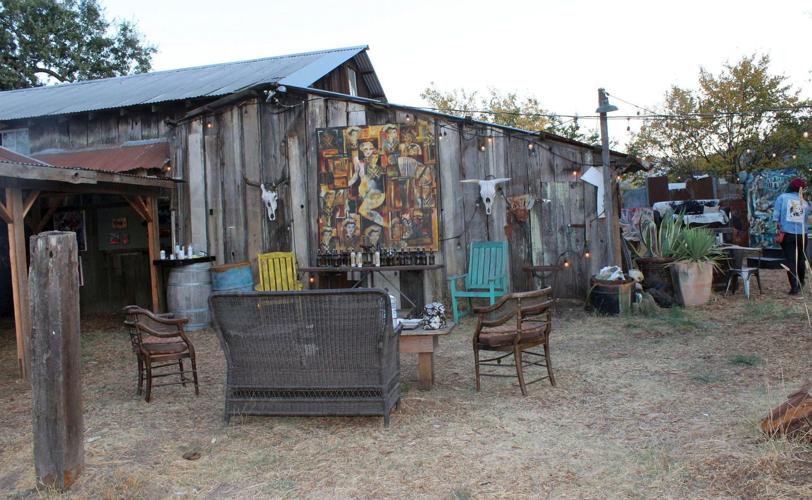 The Baker Sisters' art studio on Ehlers Lane in St. Helena is a haven for artists to visit, stay, and experiment. 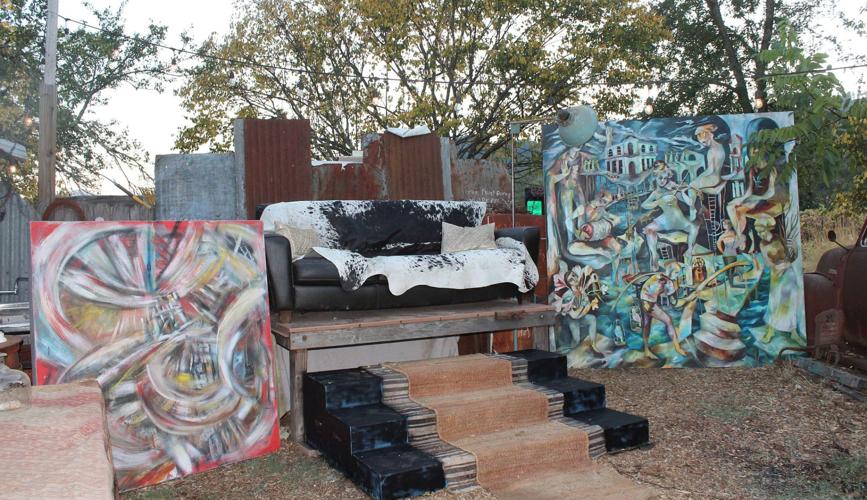 Original paintings by Mercedes Baker, left, and Melissa Baker, right, at their studio on Ehlers Lane in St. Helena. 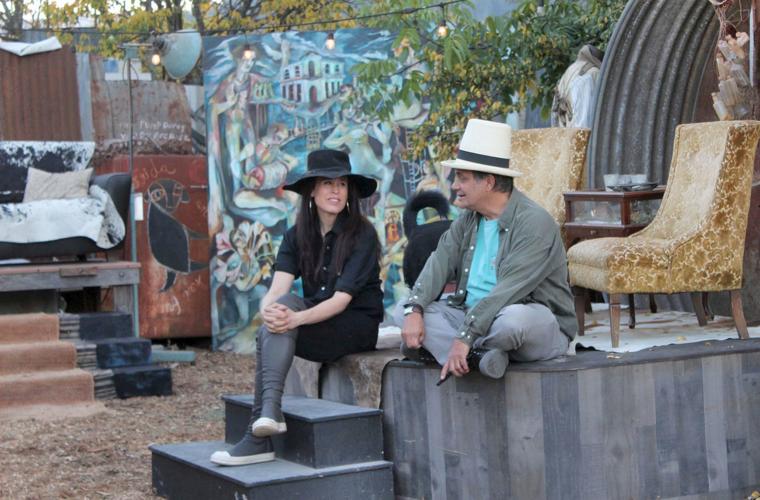 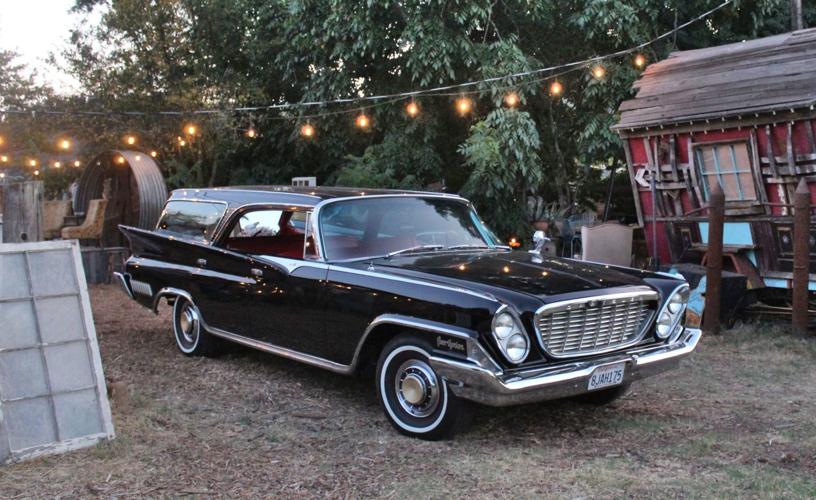 A 1961 Chrystler New Yorker was featured in the Baker Sisters' art show Oct. 11.

There is a little mystery and mystique surrounding the Baker Sisters, which is not entirely unfounded. During a recent visit to an exhibit at their artist’s lair on Ehlers Lane in St. Helena, guests old and new were greeted like long lost friends.

Melissa and Mercedes Baker are accomplished painters and musicians. Their presence is joyful, and it’s evident they like to live life large. Their long list of talents also includes designing large scale installations for wineries, and the annual Nimbash celebration in St. Helena. Their band performs at places like the Mystic Theater in Petaluma.

They are the founders of the Ehlers Lane Art Collective, and every so often hold an exhibition of new works at their studio, a 1920s hay barn, on the family’s 6-acre ranch in St. Helena. An exhibit on Oct. 11 featured the Bakers’ artwork and that of several other visiting artists, who often come and stay on the property.

The ranch is described in American Art Collector magazine as a place with “hundred year old houses, trees, rusty cars, fields, a gypsy wagon, a river, and an abundance of talented artists. It’s where community is luxury and creativity is treasure.”

The sisters also teach at Nimbus Arts in St. Helena, and are known for creating the backdrops for the Nimbash fundraising events, and other happenings around Napa and Sonoma. This past spring they designed the staging for Calistoga’s Engage Art Fair.

Another Baker sister, Anna, also lives in St. Helena, and is also a painter.

“The art is just oozing out of these people,” said Gary Himelfarb, owner of Rags to Riches in Calistoga. Currently a vintage-themed shop, Himelfarb is giving the sisters free rein to transform his store with their ideas and to exhibit their art. “When art and commerce meet you’re walking on a tightrope. I deal with selling and they do the art,” he said.

Melissa and Mercedes work and live on the ranch. The sisters grew up here, where, before there were wall-to-wall vineyards, the family raised cattle.

“The studio and the property it sits on is like wine — with age it always gets better,” Melissa Baker said.

Anna Baker tells the story of the property that the family bought from folks “who walked here from Utah,” she said. The women of that family built the house that Melissa now lives in.

The sisters’ father, Glenn, was a veterinarian of some renown. People came from far and wide, bringing their animals to his Twin Oaks Veterinary Clinic. He has plenty of stories of his own to tell (“Which one do you want to hear?” he heartily chuckles upon a first meeting). There were only six or seven vineyards Upvalley at the time, and most of the land was for grazing cattle, he said.

The Baker girls grew up free and unfettered from city life. They spent their spare time drawing, writing, and turning old dusty hay barns into palaces of their imagination. The sisters were also a part of the life at their father’s clinic… but that’s another story.

After college, Melissa and Mercedes returned to the Ehlers Lane ranch, converting it into an artist’s living and working space.

With their paintings, the sisters tend to use similar colors in their work, though Melissa’s artwork leans toward abstract and Mercedes representational.

Melissa describes her paintings as “abstract but representational. There might be references to a city, to a structure, and an underground, played upon by a duality of light.”

Mercedes says she paints in many different styles that can’t be pinned down.

“I would get tired of doing the same thing,” she said. “It keeps life interesting. I don’t want to get stale.”

Jim Caudill and his wife Char Banach live in Bennett Valley. They used to bring their (rather famous) cat Asia to Glenn Baker’s veterinary clinic, and now enjoy attending the art events. They started collecting the Baker Sisters’ work 20 years ago, and have acquired about half a dozen paintings, Caudill said.

“They are an amazingly talented family. They are always upbeat and friendly,” he said, adding the place used to be “even crazier than it is now. They are a local treasure.”

In its 5th year, Calistoga Art Fair gets bigger, better

Calistoga’s Engage Art Fair, now in its fifth year, is gaining steam, drawing more and various artists and from further away.

Creating the magic of St. Helena's Nimbash year after year

By all accounts, Nimbash 2019, held Saturday, May 18, in St. Helena, was spectacularly successful and enormously entertaining – once more exce…

There’s something about the first block of Lincoln Avenue that has attracted three side-by-side shops, each with distinctive vintage genres an…

The new CAMi Gallery & Tasting Room in downtown Calistoga will host an open house from 4 to 8 p.m., Friday, July 26. Along with music and …

Nimbus Arts has canceled its annual NIMBASH fundraiser, which had been scheduled for May 9.

Renown artists and musicians Mercedes, Anna, and Melissa Baker at their studio Oct. 11.

A large abstract by Melissa Baker hangs in their art studio, a 1920s converted barn on Ehlers Lane in St. Helena.

The Baker Sisters' art studio on Ehlers Lane in St. Helena is a haven for artists to visit, stay, and experiment.

Original paintings by Mercedes Baker, left, and Melissa Baker, right, at their studio on Ehlers Lane in St. Helena.

A 1961 Chrystler New Yorker was featured in the Baker Sisters' art show Oct. 11.