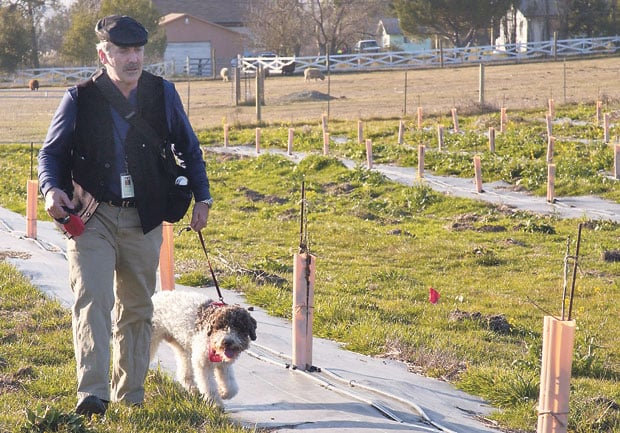 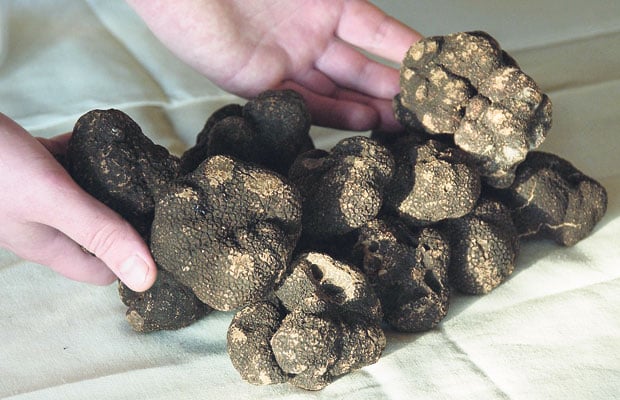 A pile of precious black truffles. These are the most sought after and expensive truffles for culinary purposes; highly treasured for their unique flavor and aroma. 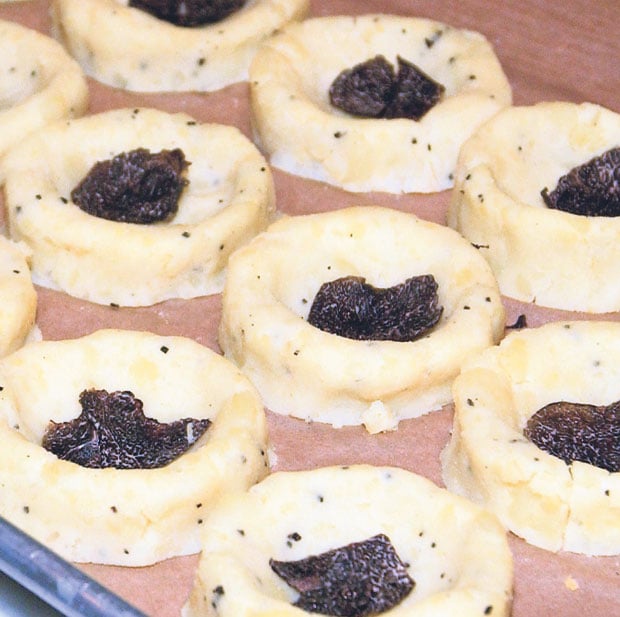 A pile of precious black truffles. These are the most sought after and expensive truffles for culinary purposes; highly treasured for their unique flavor and aroma.

Each year, more vintners are adding truffle orchards to their vineyard properties and many more are giving the idea serious consideration.

“With proper scientific methodology, European truffles can be cultivated here in North America, and many have started what’s destined to be highly productive and profitable truffle orchards,” Chang said.

The demand for black truffles, the most sought-after truffles for culinary purposes, far exceeds supply. They are treasured for their unique flavor and aroma and command very high prices: up to $1,000 per pound, wholesale.

“Soon, chefs in North America will be able to get black truffles from farm to kitchen in a matter of hours, instead of days as is currently the case with imported European truffles,” he said.

Truffles are essentially underground mushrooms that grow on the roots of specific trees. Black truffles develop most successfully on oak and hazel trees.

Historically, black truffle cultivation has been almost exclusively a European venture, with truffles grown predominately in France, Spain and Italy. But that is changing.

Black truffles are now being cultivated in a variety of climates and countries around the world, including Australia, South Africa, Canada and the United States.

“There are many myths and misinformation in the public domain and on the Internet, when it comes to truffle cultivation,” Chang said.

“The only way to reliably set up one’s truffle orchard for success and consistently achieve high yields is to rely on rigorous science,” he said.

The science that he referred to revolves primarily around climate and soil conditions.

Spring and summer rainfall is believed to have the biggest single influence on truffle yield, but irrigation can bridge the gap in drier climates such as Napa Valley.

The viability of a truffle orchard is also highly dependent on free-draining soil with pH levels of 7.6-7.9, higher than what is commonly found in Napa Valley.

However, according to ATC, soil pH can be easily altered through agricultural liming.

Chang said that growing truffles can be seven to ten times more profitable than growing grapes, and this difference is due to: 1) much higher revenue from truffles; and, 2) much lower labor and maintenance costs for truffle orchards compared to vineyards.

However, Chang’s data was based on chardonnay grapes, not cabernet sauvignon; the more typical, and more profitable, Napa Valley grape crop.

Chang’s numbers were derived by comparing average profits per acre for both grapes and truffles in full production, with truffles yielding a profit of $30,000-40,000 per acre, versus $3,600-5,000 per acre for chardonnay.

The more relevant comparison might be that between truffles and cabernet sauvignon.

Vic Motto of Global Wine Partners estimated the average farming cost per acre of valley floor land to be $5,000. This is confirmed by a 2009 U.C. Davis report, which puts the number at $5,063.

Using these figures, the average acre of Napa Valley cabernet, has an annual profit of roughly $8,350.

Dave Michul, the general manager of Beckstoffer Vineyards, agreed with that number and said there’s an old rule of thumb in Napa Valley: “If you’re making a $10,000 profit per acre of cabernet land, you’re doing really well.”

Comparing truffles at $35,000 per acre to the average cabernet, the truffles are roughly four times more profitable.

Still, there’s a lot of above-average cabernet in Napa Valley.

Comparing truffles to $8,500-per-ton cabernet, the truffles are still nearly twice as profitable.

The difference in profits expands even further when the two crops’ lifespans are taken into account.

ATC says that truffle orchards continue to produce from 40-80 years, whereas, according to the Napa Valley Vintners, cabernet grapevines have an average fruit-bearing lifespan of only 15 years (based on the tendency of local grape growers to replant every 20 years).

The investment costs of establishing a vineyard or truffle orchard are nearly the same — roughly $25,000 per acre (not including land-acquisition). However, truffles generally recoup their investment cost within 6-7 years, while vineyards take 9-10 years, says ATC.

Whether or not grape growers should replace vineyards with truffle orchards clearly depends on the quality of the current cabernet crop. Land that is uniquely suited to cabernet should probably remain planted with vineyards.

But for those growers with average profits, a 400 percent increase in revenue might well be worth consideration.

American Truffle Company Managing Director Robert Chang will conduct a two-hour seminar on the business and cultivation science of black truffles at 8:30 a.m. on Thursday, April 26, at the Napa County Farm Bureau office, 811 Jefferson St. in Napa. The seminar is free and space is limited, so RSVP to Kathleen Iudice at kiudice@comcast.net, or call 225-2354. For more information, visit americantruffle.com.