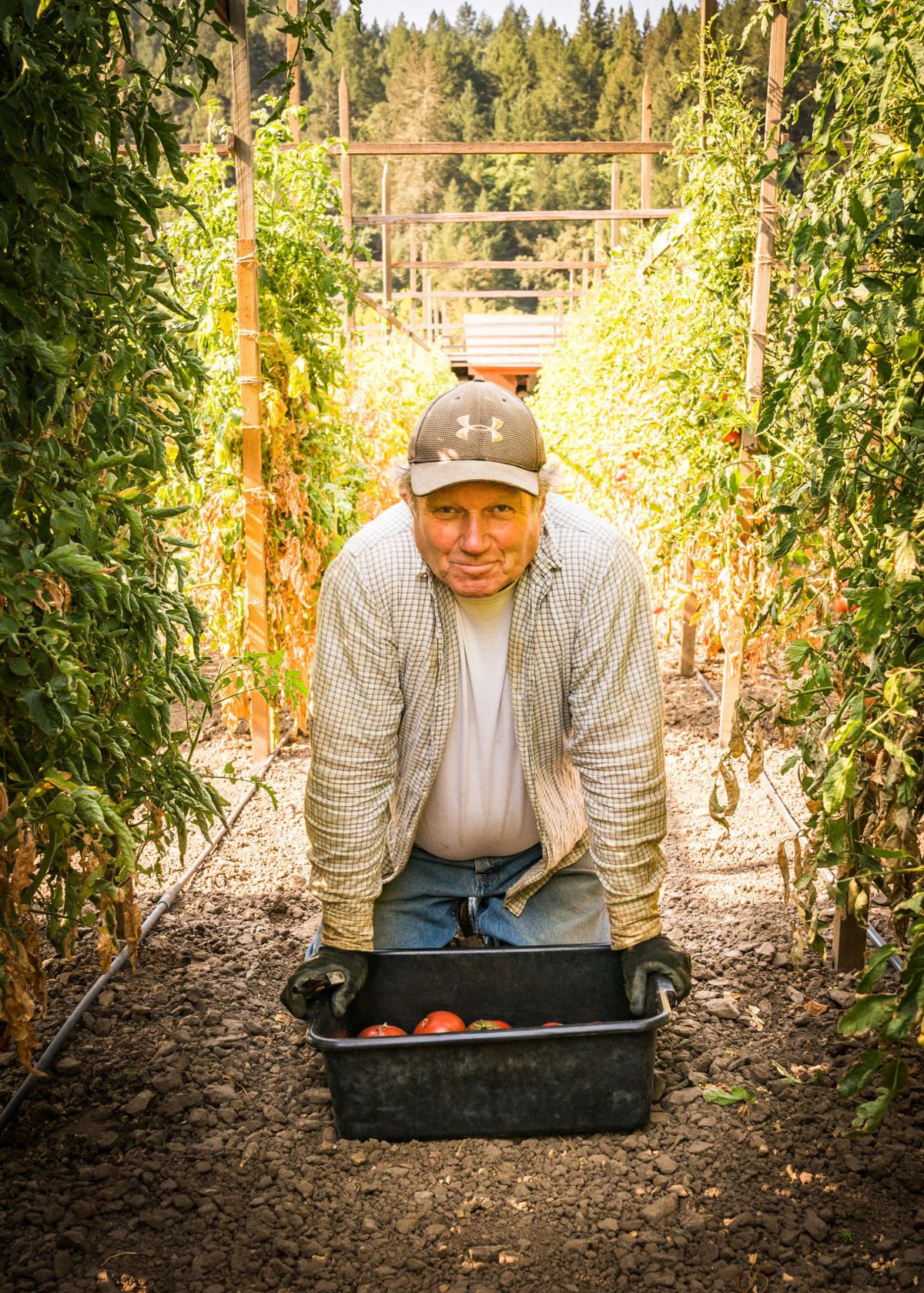 LEFT: Lynn Brown, the original founder and one of three partners who own Forni-Brown-Welsh Gardens in Calistoga, still hand-picks every tomato sold. 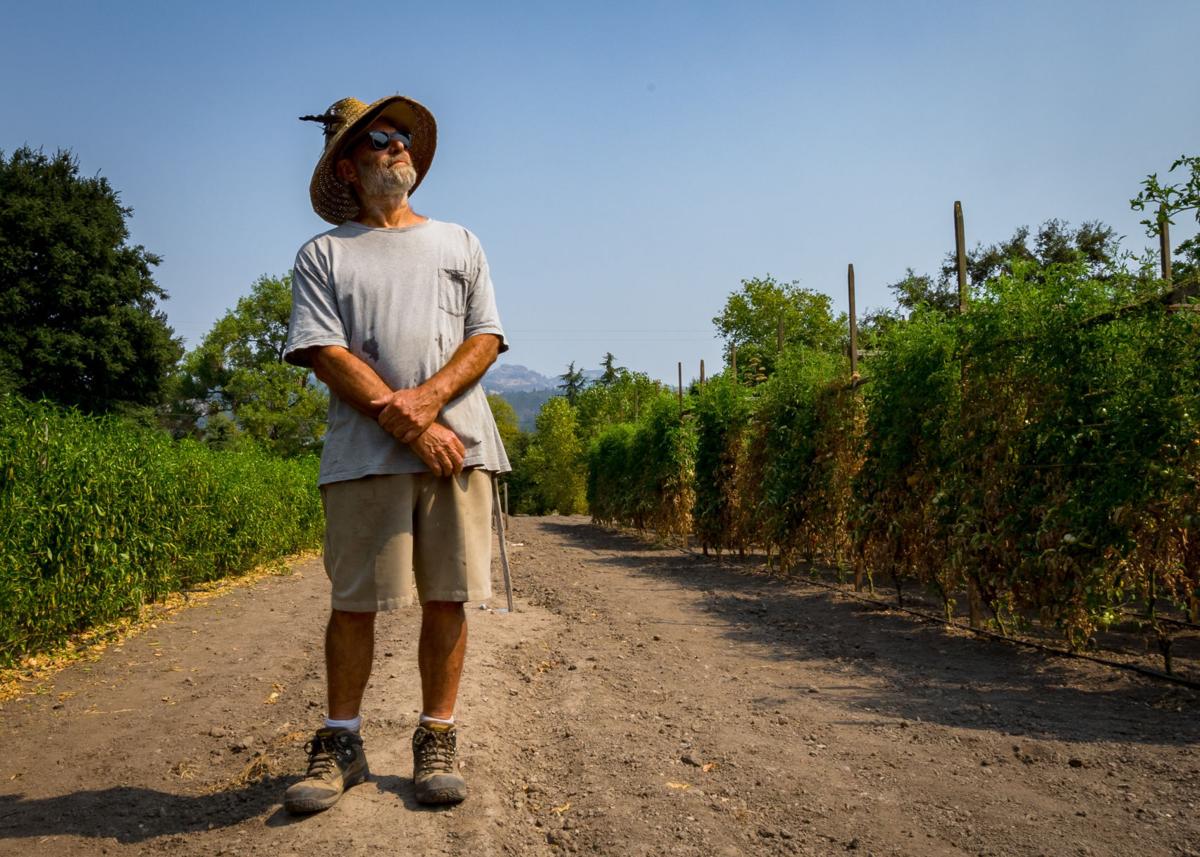 Peter Forni, one of the three partners who own Forni-Brown-Welsh Gardens in Calistoga, monitors the sun as he prepares the soil at their farm on a particularly hot day. 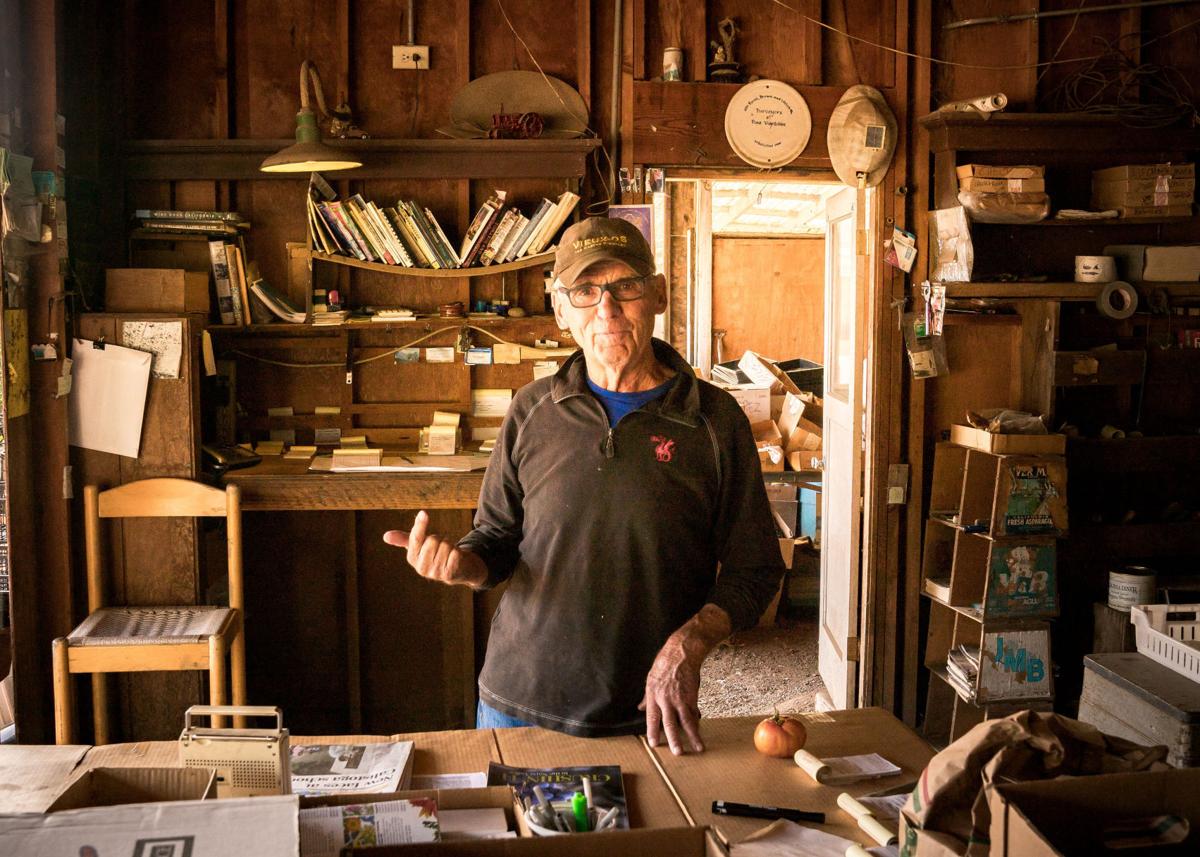 Barney Welsh, one of the three partners who own Forni-Brown-Welsh Gardens in Calistoga, prepares for his next delivery of tomatoes and Padrón peppers. 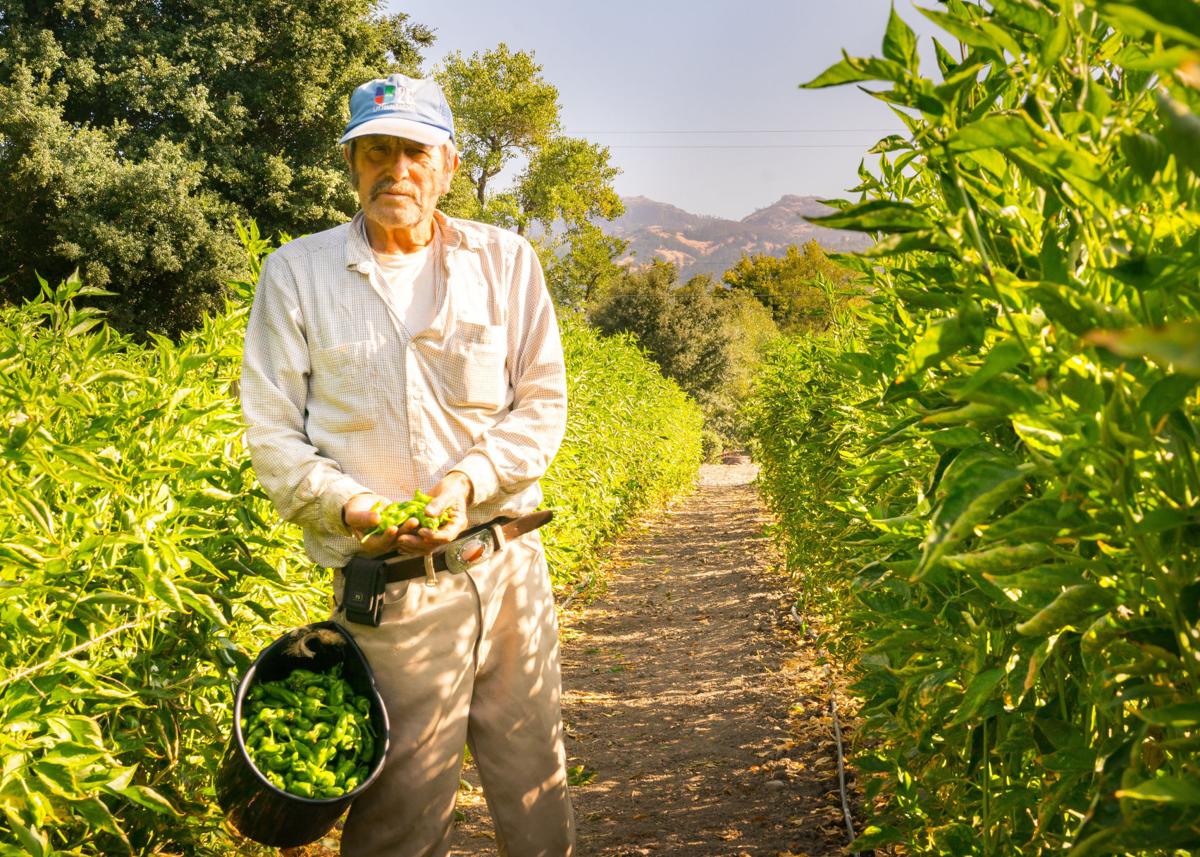 Ramon Rodriquez harvests a basket of Padrón peppers at Forni-Brown-Welsh Gardens in Calistoga. 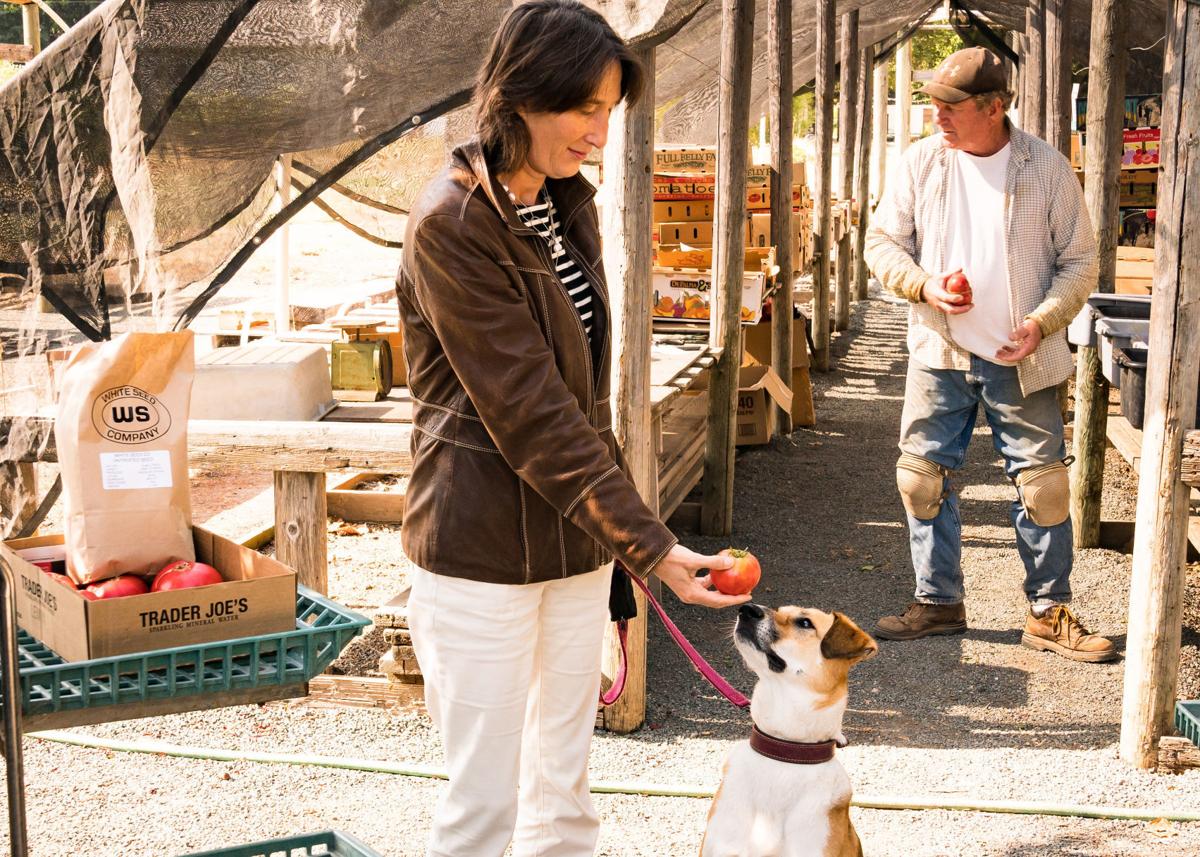 Calistoga resident and longtime customer of Forni-Brown-Welsh Gardens in Calistoga Sophie Gullung displays one of the heirloom tomatoes to her dog, an Anatolian Shepard. Lynn Brown readies tomatoes for clients in the background. 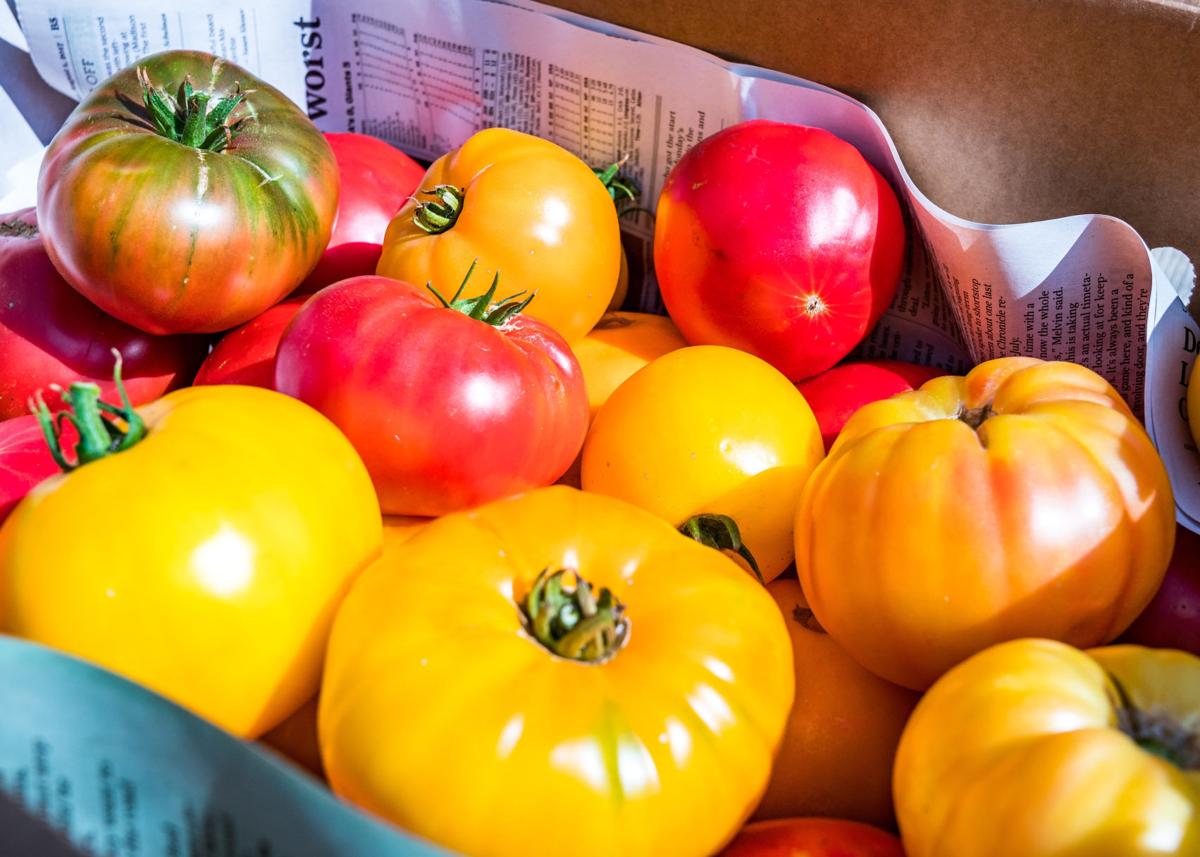 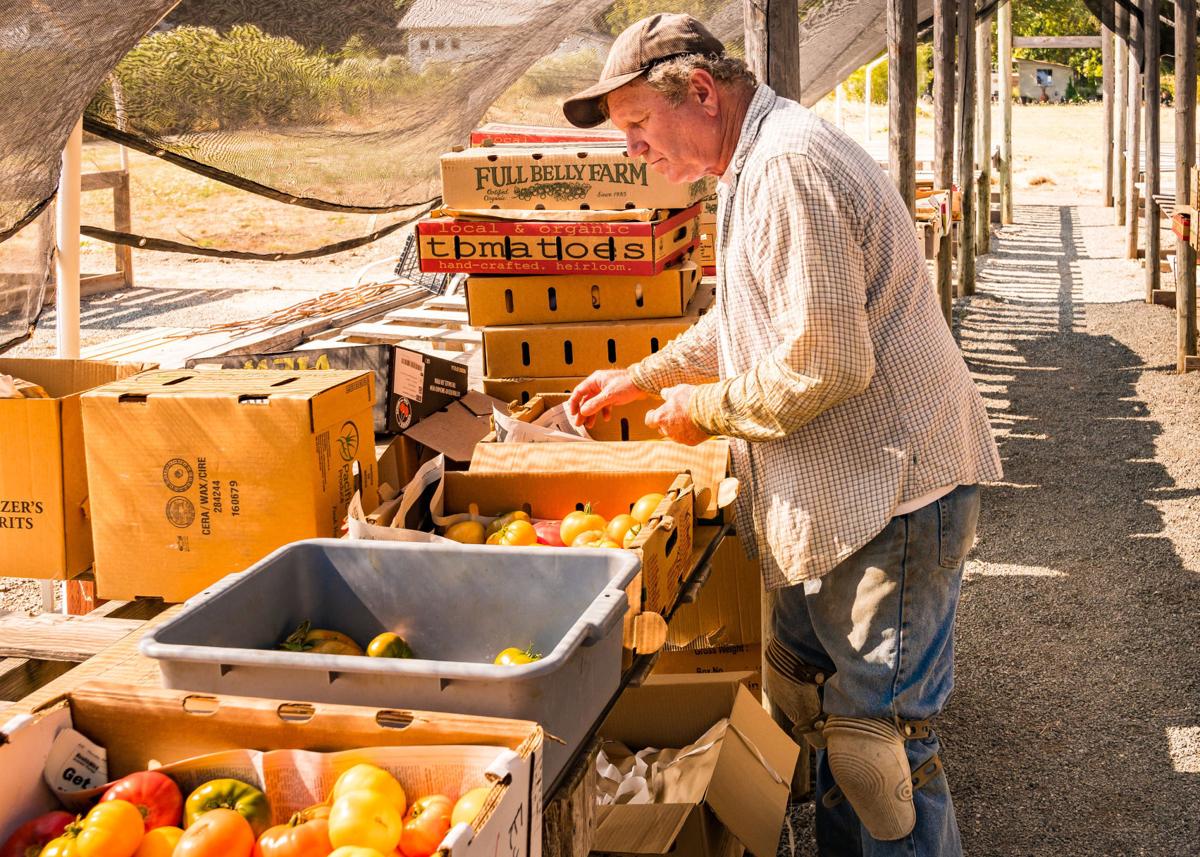 When the New York Times’ influential food critic Mimi Sheraton approached, her impeccable outfit and business-professional demeanor were in stark contrast to the dusty gravel road leading to her final destination, a rustic plot of land in Calistoga called Forni-Brown-Welsh Gardens.

Looking more like she might have been headed to a night at the opera rather than a working farm, she was skeptical but slightly hopeful, having heard rumors of the amazing tomatoes and other unique vegetables that had remained the coveted secret of some of the most influential chefs in the Napa Valley and beyond.

“As we toured the garden she told me that she’d never tasted an heirloom tomato that she actually liked,” said Lynn Brown, the founder and one of three partners who now own the gardens. “I guess she’d come to see what we were up to.”

That late-summer day had been perfect, according to Brown.

“As we walked along and talked I reached up and picked one of my favorite types of tomatoes that grow here — a Giant Syrian. It was still warm from the sun, and I cut out a big wedge and handed it to her. People think you need salt, but I never use salt on my tomatoes.”

Later, Sheraton often relived the moment in her writings and interviews.

“But of all the native tomatoes, none is so breathtaking as the Giant Syrian still custom-grown to strict organic standards for the innovative upscale restaurants of Napa and Sonoma by Forni-Brown-Welsh Gardens in Calistoga,” she wrote in her book, “1,000 Foods to Eat Before You Die.”

“The huge, meaty, radish-red fruit nurtured there fairly quivers with succulence and an almost bloody, beefy richness — its flavor so complete, even salt may be unnecessary.”

In “Inside the California Food Revolution” Joyce Goldstein (author, chef and former owner of Square One restaurant in San Francisco) also wrote about Sheraton’s experience with the tomato: “She almost wept when she tasted it.”

“It was just a revelation when I tasted that tomato,” Sheraton said during a phone interview. “I bit into it and it hit me so unexpectedly and so wonderfully — I’d had plenty of good tomatoes in my life but none like that.”

As to why the tomatoes are so good, Brown points to picking them ripe as one of the keys.

“In the case of Mimi Sheraton, here was somebody whose entire life and passion has been food, but she’d never been given a properly picked tomato,” he said. “Most tomatoes people eat have been picked green and unripe for transit. Here we pick them only when they are ripe and then make sure the skins do not get punctured or the flesh bruised. Same goes for our vegetables, including eggplant and salad greens.”

I’ve picked plenty of ripe tomatoes in my life, but none seem to rival those grown at this particular few-acre garden in Calistoga. When I asked Brown what made the difference he just shrugged.

Of the dozens of types of heirloom tomatoes my favorite of the selection offered at the gardens are the ruby-rust-colored Russian Blacks and the striated rose and sun-orange-colored Hillbilly varieties, each of which has its own subtle difference in flavor, texture and aroma. But the season for such wonders is fleeting, especially this year when high temperatures have reduced the crop considerably.

Along with throngs of others, I actually mark my summers by the Forni-Brown-Welsh calendar. The highlights include a plant sale in early April through May of each year when a dizzyingly broad array of plants and seeds are available for purchase at the garden. The next important time is midsummer, when the first vegetables begin to ripen and can be found at various local markets and restaurants.

But it is August that represents the highlight of my culinary-calendar year because it is then when the Forni-Brown-Welsh Padrón peppers and tomatoes have ripened to their peak. It is then that I often find myself drawn to local markets such as Cal Mart or Sunshine in search of the transient, fresh-picked tomato treasures. Once purchased, I delicately transport my coveted cargo home, secretly hoping that my wife and children might be out so I can greedily cut the first thick wedges from the ripest of the offerings. With a tiny splash of local olive oil and a light dusting of sea salt (I do like salt on all my tomatoes), I lift that first slice into the air and dangle it teasingly in front of my mouth. Aromas of earth and sun flood my mind with images of the tomatoes of my youth and then I take a bite and everything in the world seems right somehow, the sweet luscious fruit melting into mouthwatering savory flavors that call only for another taste.

And I am not the only one who has modified their life to center around the Forni-Brown-Welsh Garden.

“It’s one of the reasons we moved here,” Sophie Gullung said. “My sister Martine introduced us to Forni-Brown about 20 years ago. Forni-Brown is really the heart of Calistoga — for me they represent the true and authentic Calistoga, which is slowly disappearing. It is not about money first. It is about the product, the connection with the customers. A labor of love.”

Growing food that tastes good can have many benefits

“The seeds of the heirlooms have had to have been saved and nurtured over generations,” Goldstein said during a phone interview. “The seeds and plants have to be cared for and tended by meticulous farmers and the tomatoes are often presented to customers by innovative chefs. The result connects us to humanity by bringing back vivid taste memories.”

“Eating a wide range of foods from different cultures provides us an idea of what others love,” Sheraton said. “By exploring these different foods we gain a greater understanding and more tolerance for other people and their traditions — this is especially important now.”

“The food revolution in California was centered first around making food that tastes good, but there have been other benefits,” Goldstein said. “To grow these kinds of foods the farmers must care for the land and the products. And now there is a dazzling array of items for people and chefs to choose from. But that wasn’t always the case. For a long time we had only tomatoes that had been picked green and transported and stored in refrigerators — one should never put a tomato in a refrigerator!”

“Back when we first started in the late 1970s items like mesclun salad mix, arugula, Padrón peppers, French green beans (haricots verts) and heirloom tomatoes were nearly unheard of around here,” Brown said. “But chefs like Bruce LeFavour and the late Masataka (Masa) Kobayashi, then at Auberge de Soleil, were asking for special items and we were happy to oblige.”

For all the acclaim, the operation at Forni-Brown-Welsh Gardens remains a humble operation with a few long-term employees and the three partners each actively engaged in the farming activities.

Where as each of the three partners play their own special role in the operations, Brown himself still picks all the tomatoes by hand.

When I asked Brown why he insists on hand-picking all the tomatoes he looked out into the garden where one of their longtime employees was finishing up picking baskets full of Padrón peppers, the morning sun’s heat already causing small mirage waves to hover above the ground.

“I pick them because I know how to do it without bruising the fruit and because I can keep track of where I left off the day before,” he said.

But then Brown looked at Welsh, who just smiled at me before he turned to the back room to prepare a few boxes of tomatoes for delivery.

“Is there some other reason?” I asked.

Brown hesitated. “Well, you see,” he finally said but then paused and looked back toward the garden. “One of our employees has a tough time distinguishing between colors, and it would break his heart if we hired someone besides me to pick the tomatoes instead of him — so I just keep picking them, which seems to work best for everyone.”

A Calistoga couple has won city approval for a winery and tasting room on Foothill Boulevard next to T-Vine Winery.

LEFT: Lynn Brown, the original founder and one of three partners who own Forni-Brown-Welsh Gardens in Calistoga, still hand-picks every tomato sold.

Peter Forni, one of the three partners who own Forni-Brown-Welsh Gardens in Calistoga, monitors the sun as he prepares the soil at their farm on a particularly hot day.

Barney Welsh, one of the three partners who own Forni-Brown-Welsh Gardens in Calistoga, prepares for his next delivery of tomatoes and Padrón peppers.

Ramon Rodriquez harvests a basket of Padrón peppers at Forni-Brown-Welsh Gardens in Calistoga.

Calistoga resident and longtime customer of Forni-Brown-Welsh Gardens in Calistoga Sophie Gullung displays one of the heirloom tomatoes to her dog, an Anatolian Shepard. Lynn Brown readies tomatoes for clients in the background.