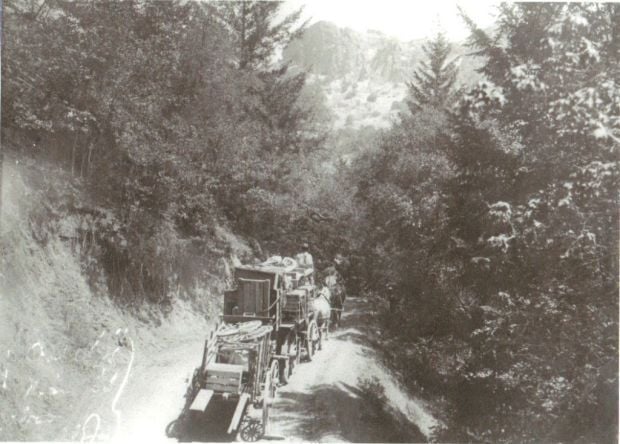 This stagecoach is similar in style to the one robbed in the story. 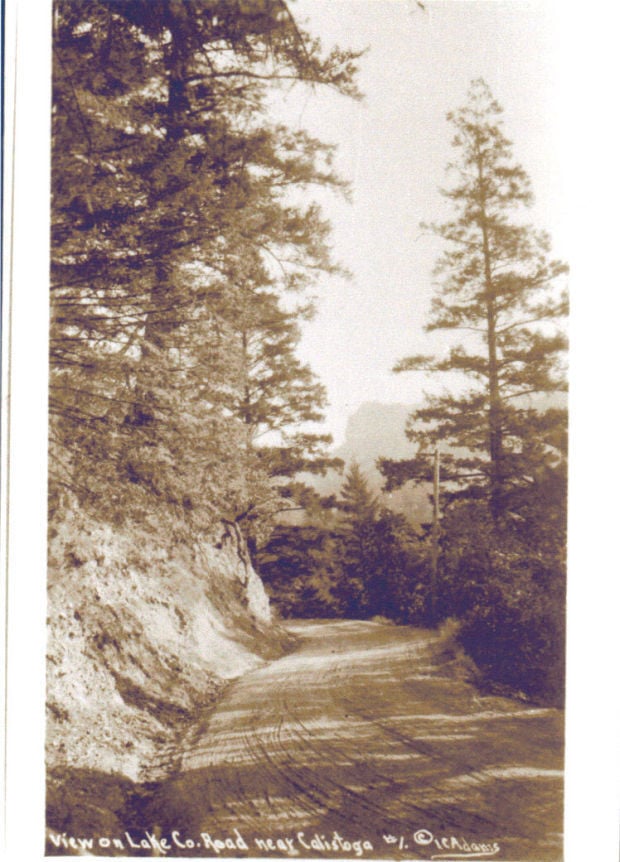 The old road from Calistoga to Kelseyville where the stagecoach was robbed.

Hot summer days had come early in late June of 1878 as a young Thomas James traveled west from New Jersey with his mother. Thomas’ father had come ahead and after establishing a freighting business, had sent for his family. Thomas was anxious to see his father again, it being two long years without word.

The town was Dutch Charley Flat, a small but rich mining town near the placers, just 30 miles northeast of what is now Auburn. As the train pulled into the station, the elder James was nowhere to be found. Thomas and his mother searched the narrow, yet bustling, main street. They found only stores and noisy saloons, but no one who could help them.

They wandered through the back streets filled with tents and makeshift cabins asking questions, searching for anyone who may have known Mr. James. Finally, after visiting a local livery stable, they were told that Mr. James had been in an accident a week earlier when his wagon, carrying a heavy load of iron pipe, had fallen over at the bottom of a canyon, killing him instantly.

With nowhere else to go and little money, Thomas and his mother moved to Sacramento, where Mrs. James had taken a job at a boarding house. Thomas also found work doing odd jobs to help support their family. Unfortunately, a few months later, Mrs. James became ill and died, leaving Thomas to fend for himself. Thomas was young, only 19 at the time. Being unable to cope with the loss of both parents, he drifted here and there sleeping in stables and spending too much time in local saloons.

The young Thomas moved from place to place, finally settling in Kelseyville. Here he met and married a widow 15 years his senior who more needed a man to work her cattle ranch than be a husband. She was a domineering woman whom Thomas fell out of love with quickly.

During one particular visit to town, he met another woman. Annabelle taught school at a local mining camp, was a member of the church choir, and was young and beautiful. She and Thomas fell in love and began a passionate relationship.

A few weeks later when Thomas was advised by Annabelle that she was carrying his child and wanted to wed, he was panic stricken. He knew that the widow would not divorce him. Annabelle’s condition would soon become obvious. What was he to do? Annabelle had the answer.

She had a close friend in San Francisco; she would move there, live for six months or so, have the baby, then maybe Thomas could follow her? But she needed money to support herself, and she had a plan. Annabelle told Thomas that once a month, the stagecoach from Calistoga carried the company payroll to Kelseyville. It would be easy, she explained, for him to rob the stagecoach. Thomas reluctantly agreed. On March 22, 1888, Thomas held up the Calistoga stage, ordering the driver, Fred Higgins, to give him the strong box carrying the payroll. Thomas’ bad luck ever following him, the box was empty. The driver had simply missed the pickup.

Time was passing, Annabelle’s condition could no longer be hidden. She left Kelseyville for San Francisco, but not before planning the second robbery attempt. The next stage delivering the strong box full of an estimated $10,000 was scheduled for June 23. This time Thomas was successful. Carrying a Winchester rifle, he ordered the driver, E.B. Stoddard, to hand over the money. Thomas didn’t even open the strong box, he simply buried it per the instructions given to him by Annabelle. She would go to the appointed stash location and retrieve it after a period of time had passed. Desperate and guilty, he simply rode out of town.

Thomas was sick over what he had done, his life was in shambles. There was nowhere to turn other than the bottle. His drunken state was constant, bar room fighting was an everyday event. On one occasion, a bottle was smashed over his head causing permanent brain damage. He was ultimately committed to the Napa State Hospital for the Insane.

During his first few months at the hospital, he received word that his wife was divorcing him. Then, a letter from San Francisco that Annabelle had died of complications stemming from childbirth. Thomas’ condition seemed to improve. He asked to speak to the local sheriff and confessed to robbing the stage. Because Thomas had been deemed insane, he could not be charged with his crime. In fact, he later vehemently denied not only the robbery, but the confession.

Curiously, in 1900, an elderly woman from San Francisco (claiming to be psychic) contacted the local authorities. Her letter stated the gold from a June 1888 Calistoga stagecoach robbery was hidden at the base of a large tree near a spring, approximately 25 yards from the old Napa-Wooden Valley Road.

Was this woman Annabelle’s friend? Had Annabelle told her where the strong box was to have been hidden?

That old stage route is now part of Highway 29.

The strong box was never recovered.

Kathy Bazzoli, a Calistoga resident, is on the board of the Sharpsteen Museum.

This stagecoach is similar in style to the one robbed in the story.

The old road from Calistoga to Kelseyville where the stagecoach was robbed.