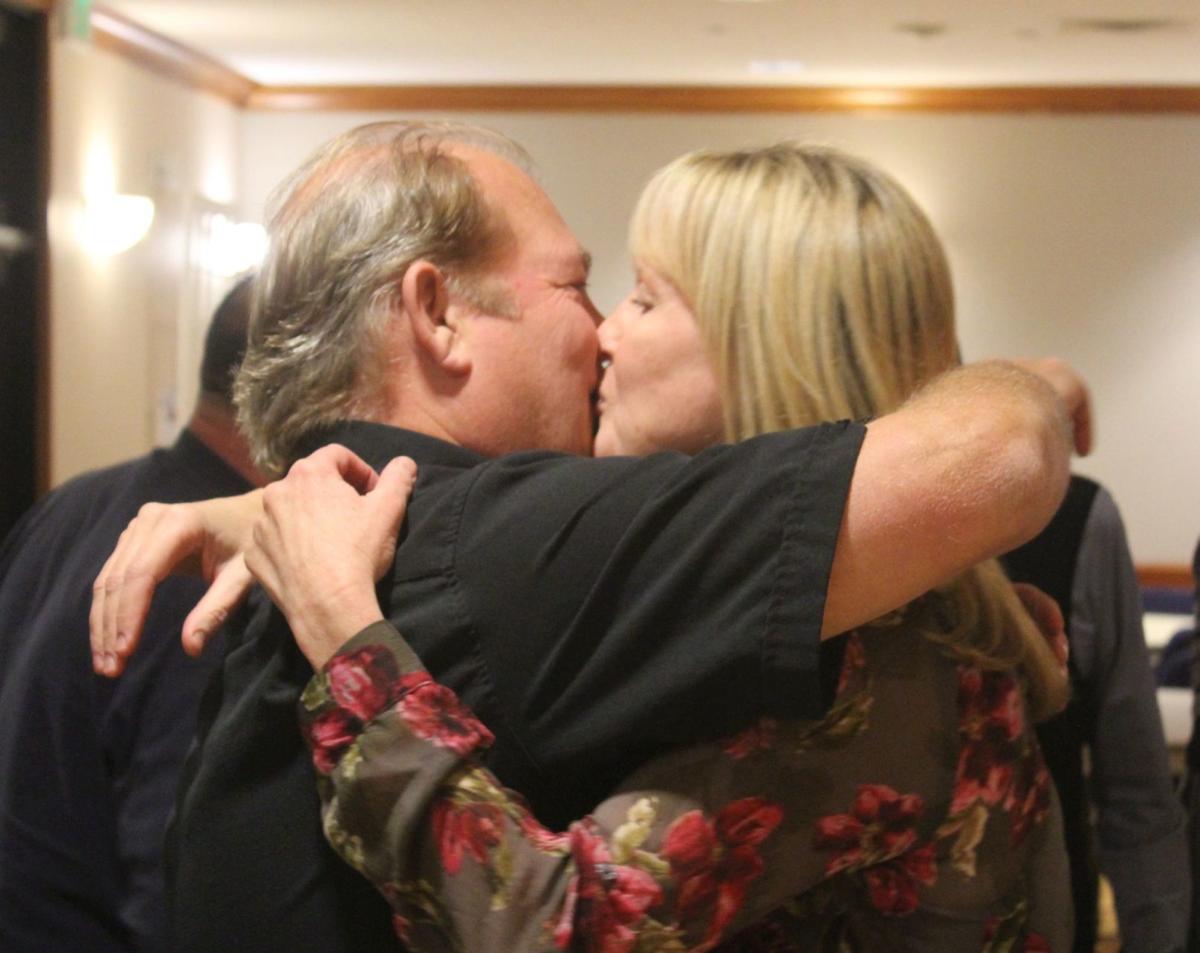 No hard feelings were apparent as Andy Gridley and his wife Susan Durbrow shared a kiss moments after she eliminated him to become Casino Rianda's first female champ. 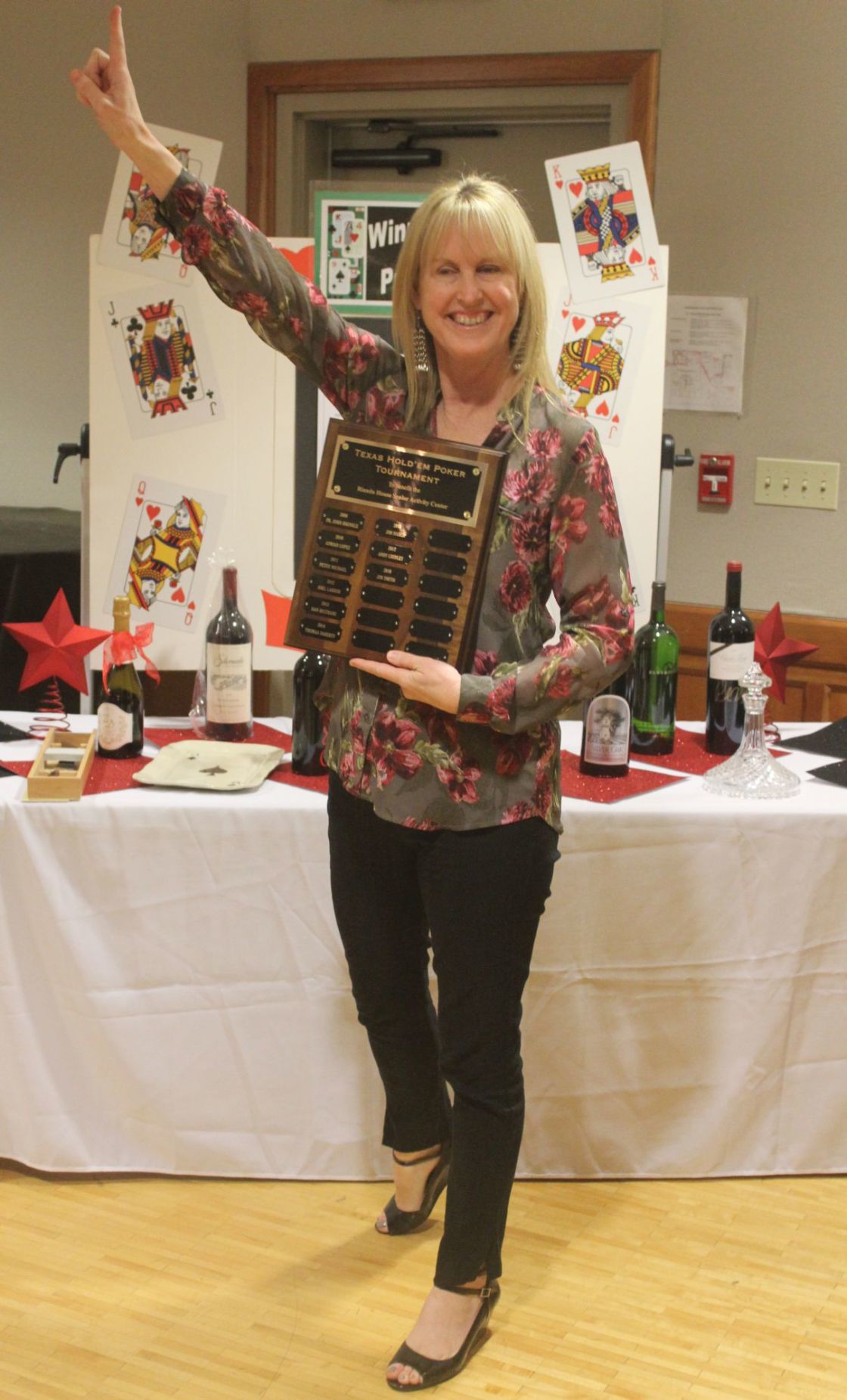 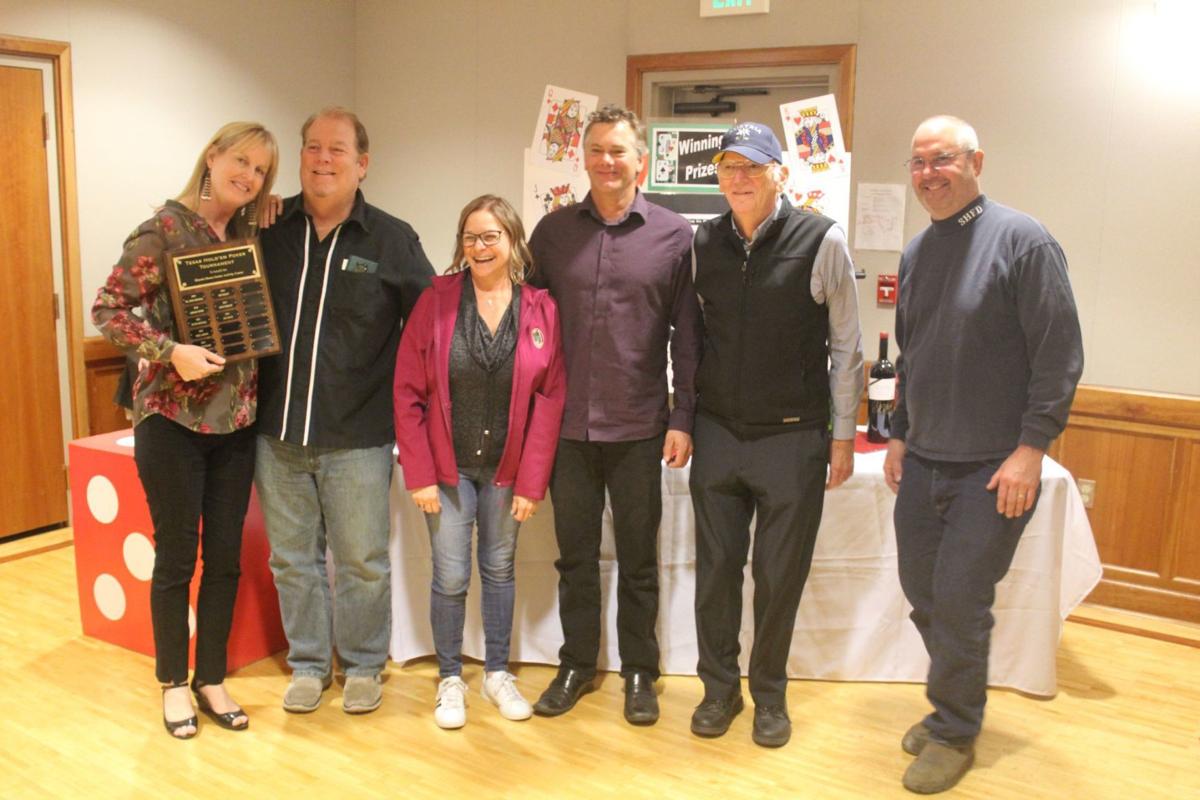 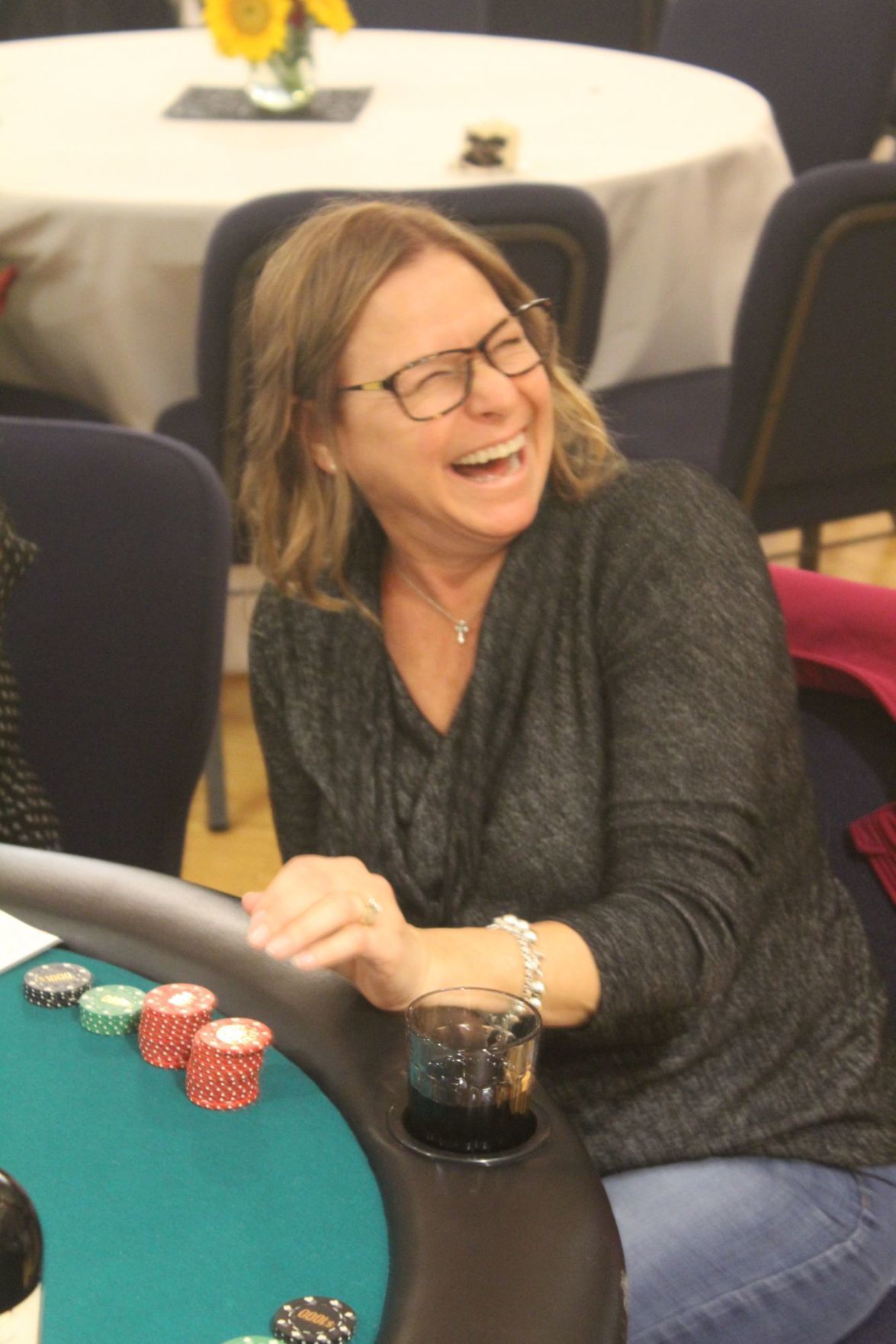 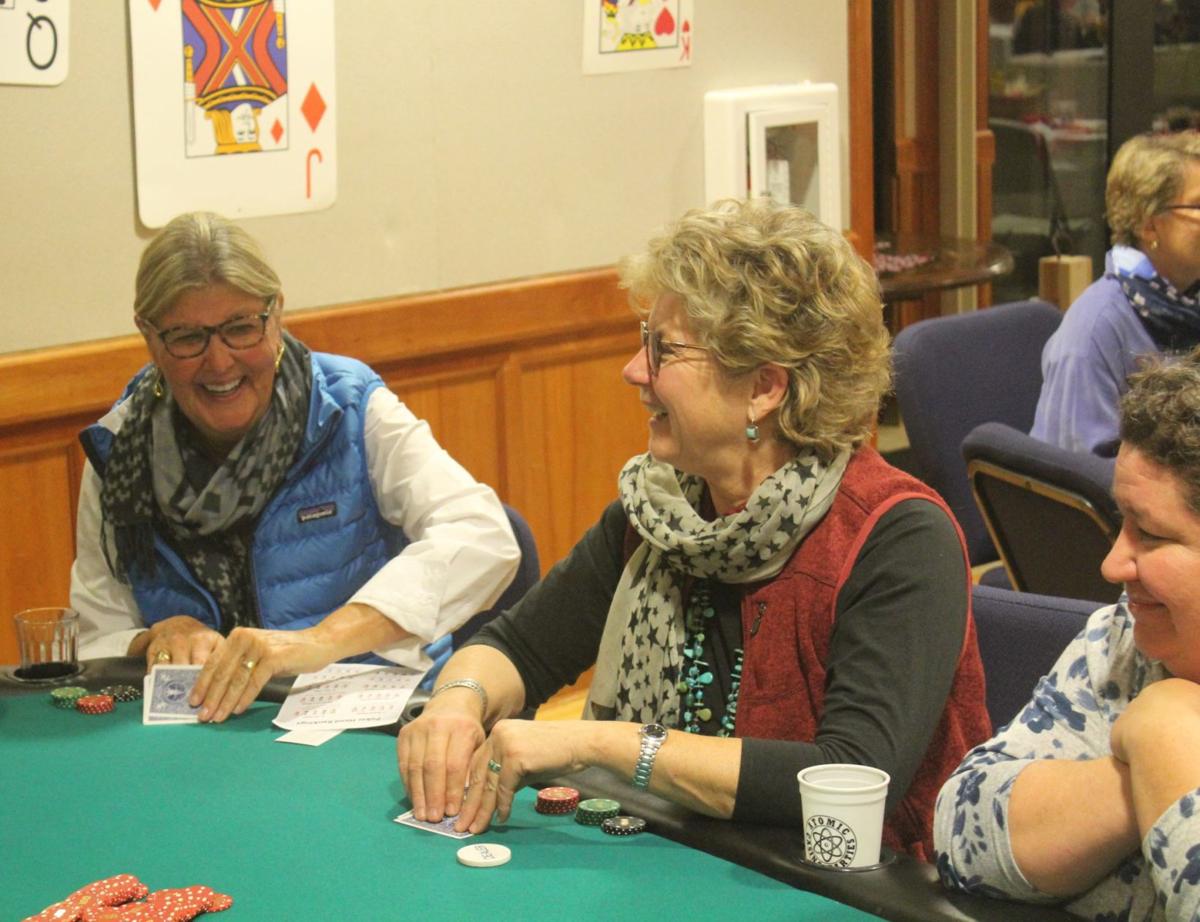 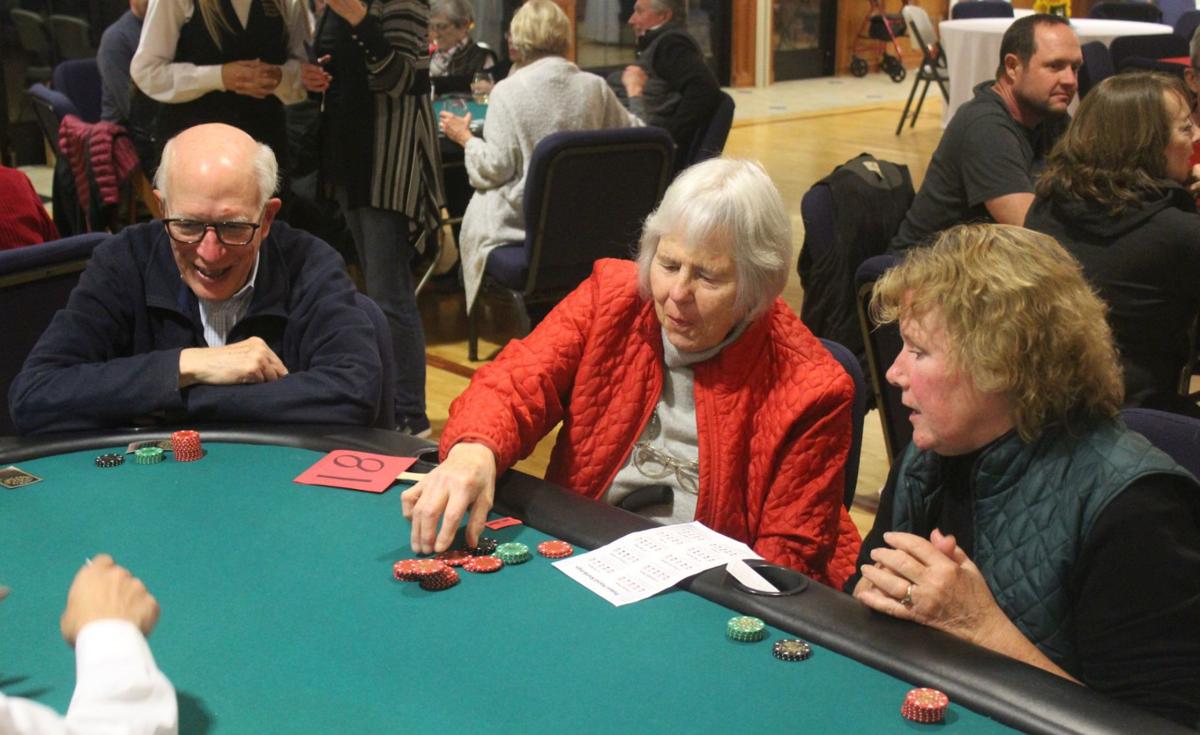 Phoebe Ellsworth rakes in a pot after beating the table with a pair of queens. Also pictured are Alan Galbraith and Leslie Cobb-Bruno, the eventual eighth-place finisher. 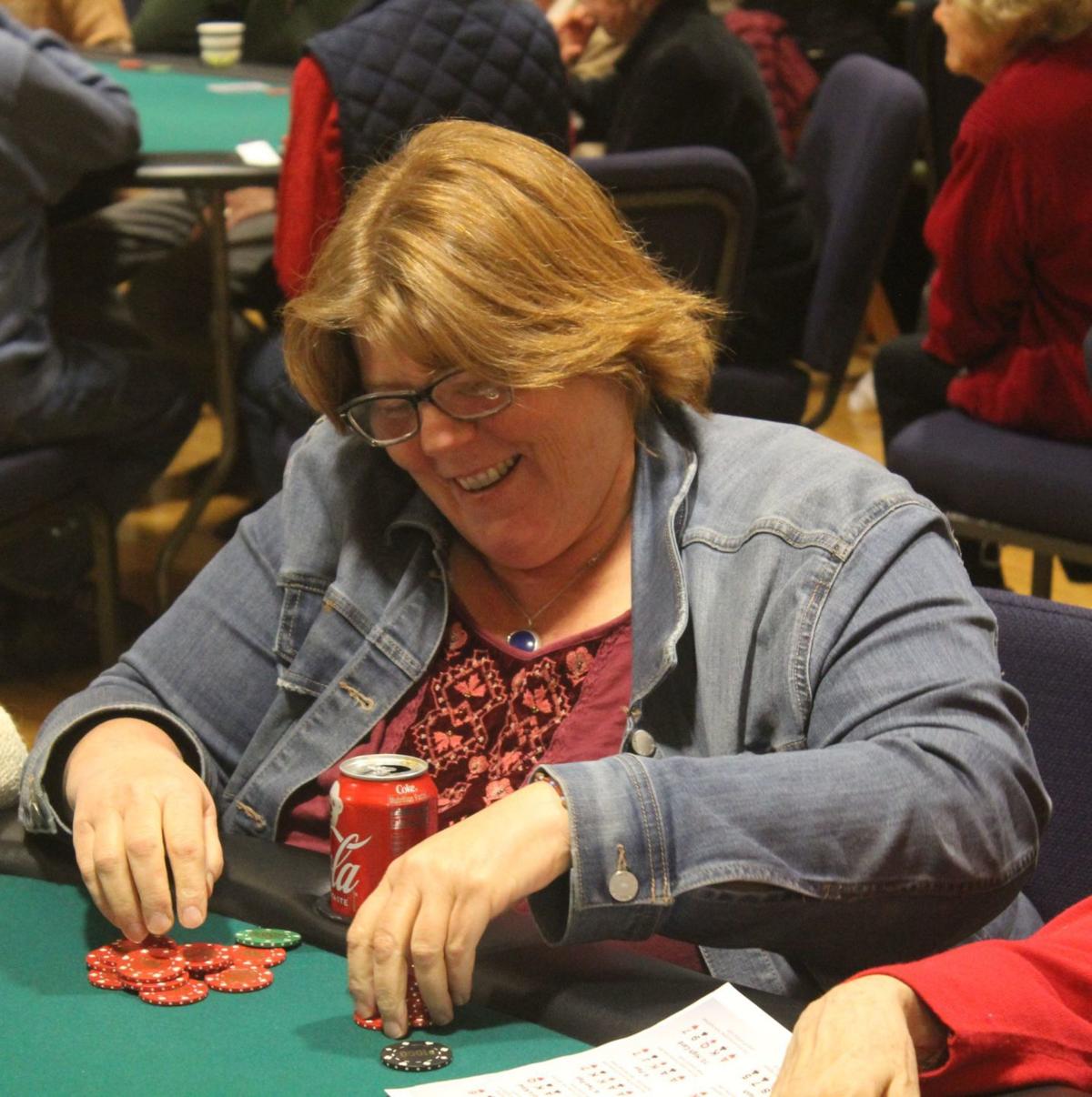 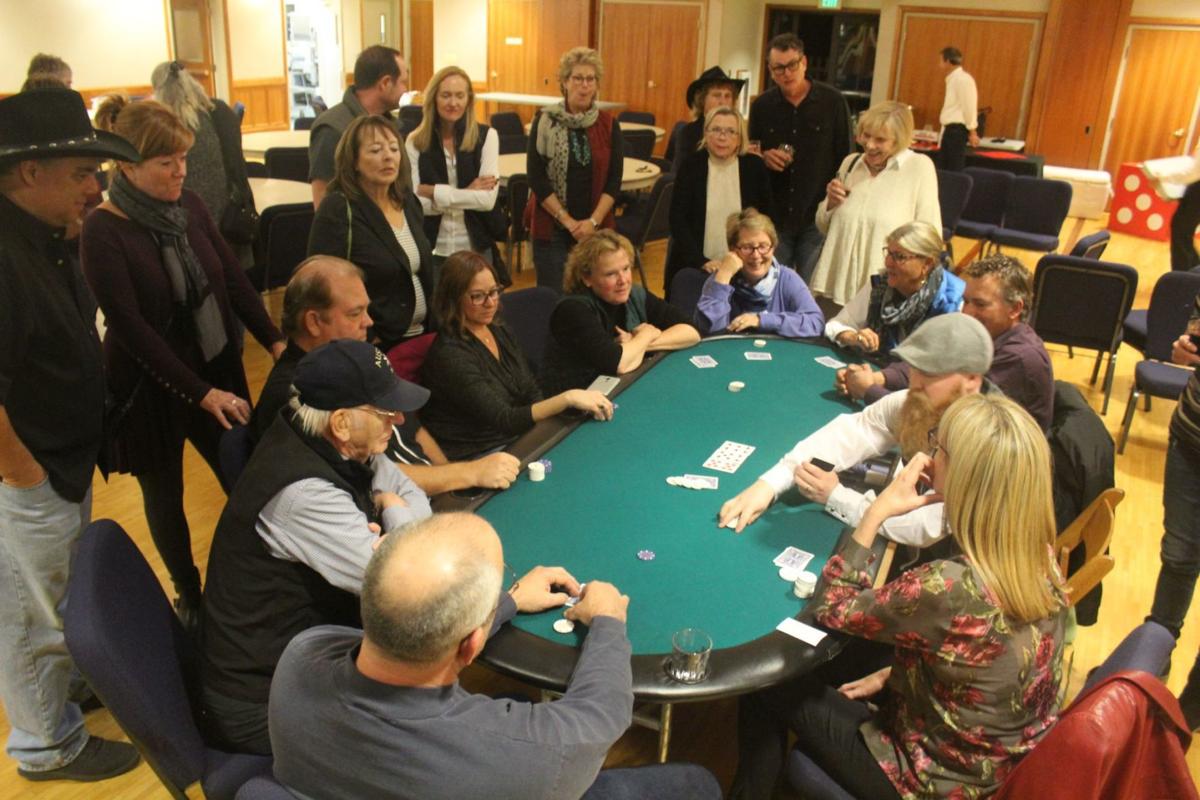 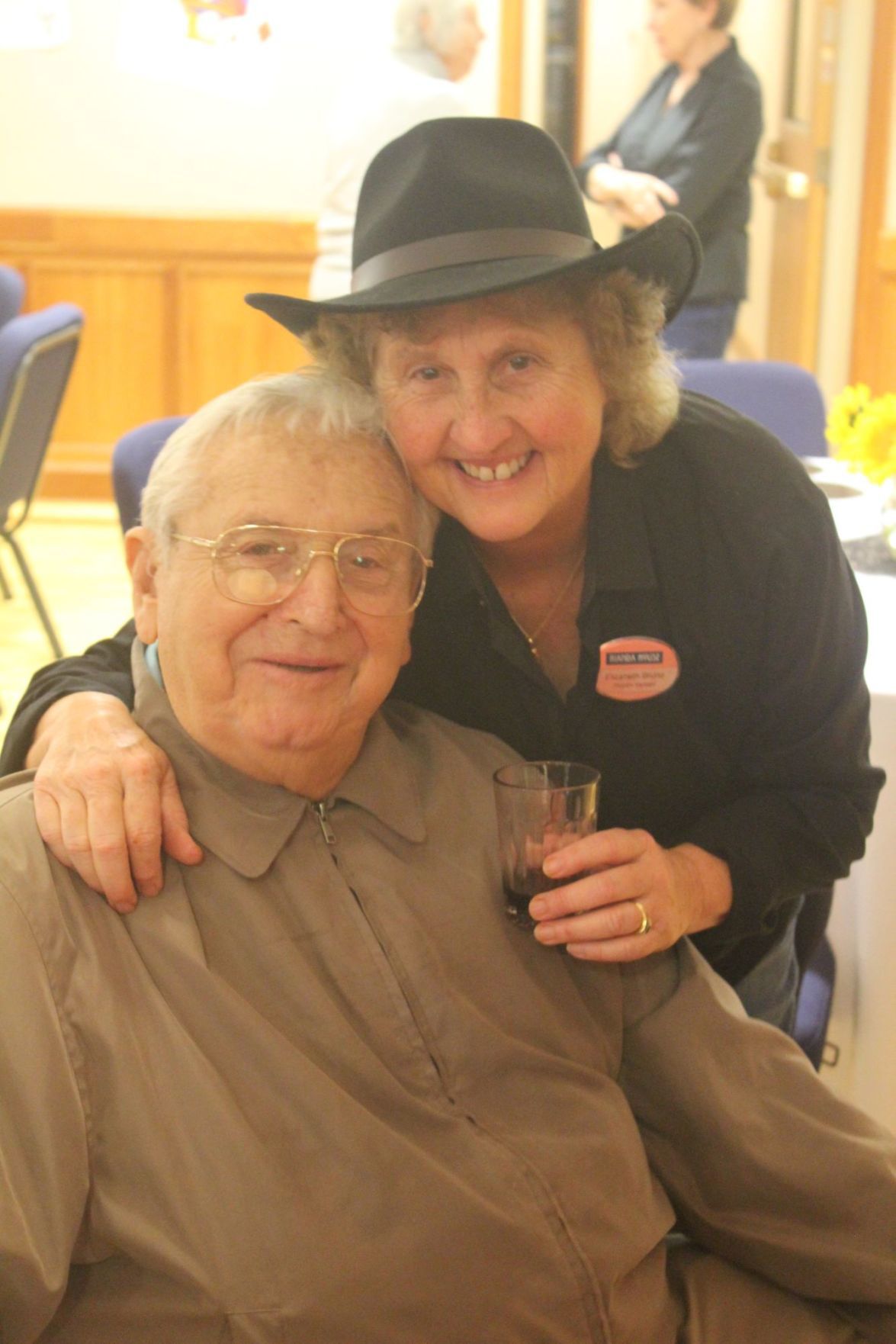 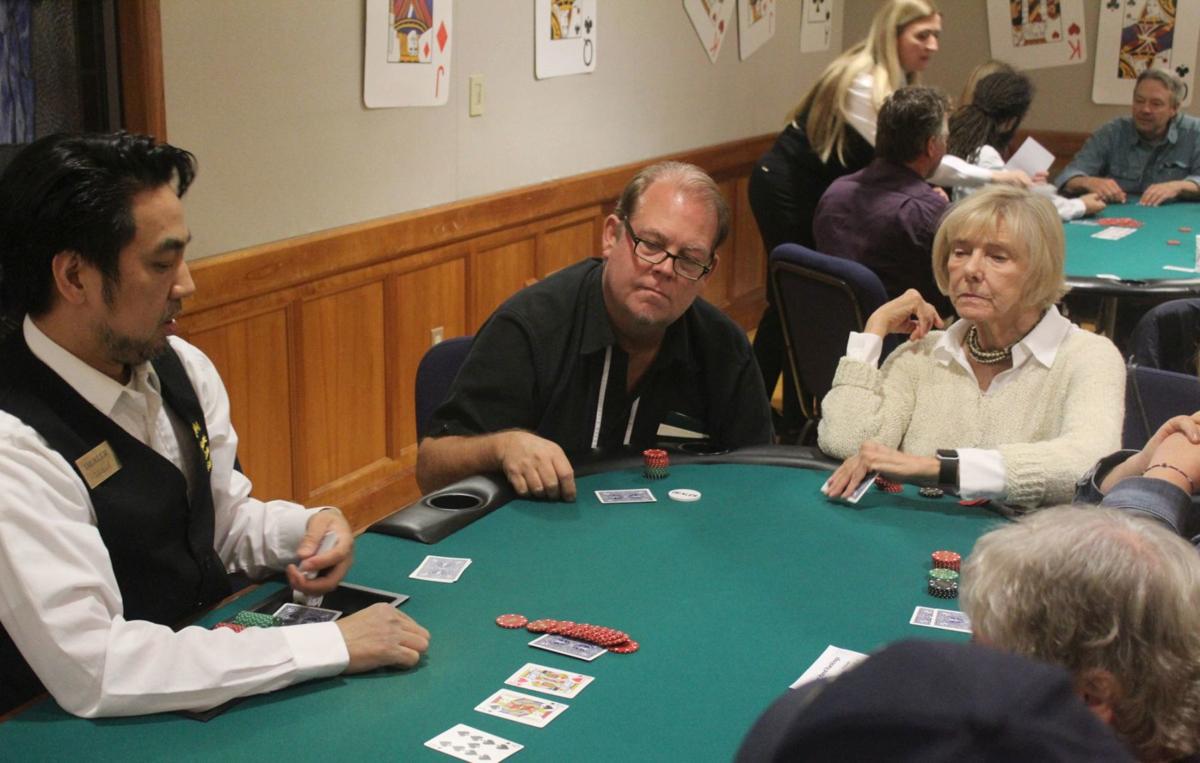 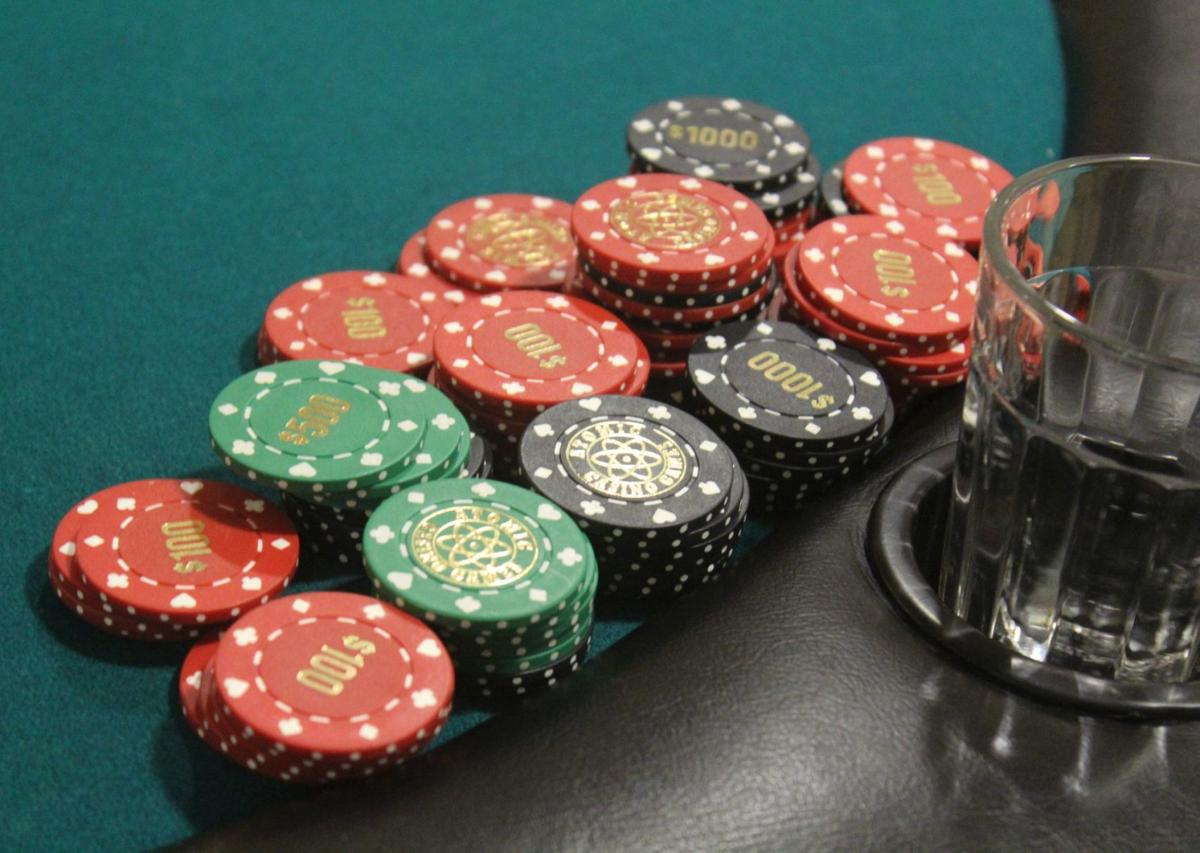 Dan Beltrami amassed a formidable chipstack on his way to finishing sixth at Friday's tournament.

No hard feelings were apparent as Andy Gridley and his wife Susan Durbrow shared a kiss moments after she eliminated him to become Casino Rianda's first female champ.

Phoebe Ellsworth rakes in a pot after beating the table with a pair of queens. Also pictured are Alan Galbraith and Leslie Cobb-Bruno, the eventual eighth-place finisher.

Dan Beltrami amassed a formidable chipstack on his way to finishing sixth at Friday's tournament.

There was just one player preventing Andy Gridley from becoming the first two-time champion of the annual Casino Rianda poker tournament: his wife.

Susan Durbrow became the first woman to win the charity tournament on Friday, scoring two-pair of aces and jacks on the flop to finish off her husband and third-place finisher April Mitts, St. Helena’s finance director.

“(Andy) has always done so well, and I’ve only played one other time, when I got knocked out really early,” Durbrow said. “This was about as exciting as it gets.”

The 10th annual Texas Hold’em tournament benefiting Rianda House was held at Grace Episcopal Church. It included dinner by Oak Avenue Catering, a silent auction, and a fund-a-need to repave the senior center’s run-down rear parking lot. Proceeds were still being tallied when the Star went to press.

“We’re savoring the community’s support,” said Julie Spencer, executive director of Rianda House. “When we started this event 10 years ago Rianda was just starting out, and to have people keep coming back to have fun is something we really appreciate.”

Durbrow spent most of the tournament quietly amassing chips at a table dominated by raucous beginners who were clearly having a great time.

At another table made up of more seasoned players and more serious action, her husband had been building a big chipstack of his own. He’d won the tournament in 2017 and finished fourth or better for three years in a row.

As the 45 players were eliminated one by one, the tables merged into a final table made up of six women and four men. Durbrow took a seat across from Gridley amidst amused murmurs from onlookers.

Finally it was down to Durbrow, Gridley and Mitts. Durbrow had the biggest chipstack and Mitts had the smallest, having survived a few desperate all-in bets.

In the final hand, Gridley placed a big bet on the table. Mitts went all-in to call his bet, and all eyes turned to Durbrow. She stared down her husband so intently that he comically covered his hands with his face. Durbrow didn’t just call his bet — she raised him, forcing him to go all-in rather than surrender the chips he’d already bet.

With Gridley and Mitts all-in, the players turned over their cards: Ace-jack for Durbrow, queen-jack for Gridley, and queen-nine for Mitts. The first three shared cards contained an ace and a jack, giving Durbrow a strong two-pair that became the winning hand.

“It’s a competition of luck and skill, but luck is probably more important,” Haslip said.

He said he plays cautiously early on while he gets a sense of the other players’ styles.

“People have patterns whether they realize it or not,” he said. “Also you don’t want to give away too much about how you play. I tend to play all the early hands almost the same way so that people can’t read what I’m doing.”

Smith, last year’s winner, said the most important skill in Texas Hold’em is patience. A smart strategy depends on the cards in your hand, how many chips you have, how many chips are in the pot, how other players are betting, and your position relative to the dealer. Being closer to “the button” gives you a chance to see how other players bet before you make your move.

Smith doesn’t pick up on other players’ “tells” – unconscious mannerisms that tip off whether they’re bluffing – but he does note their styles.

“It’s about being extremely patient and picking your opportunities,” he said.

Competitor Sharon Scott said it’s important to support Rianda House because it gives seniors a place to meet and something to do.

“Community is so important,” Scott said.

Kris Ridste lost her home in the Valley Fire and moved to St. Helena in 2015. She had family here, but no other friends.

“Rianda House was one of the places I went to build community and meet friends,” Ridste said. “If you’re retired or you’ve lost your partner, you can go there and have coffee and talk to people. It’s a place you go to feel connected.”

She’s enjoyed participating in programs and learning about Napa Valley history. She mentioned a Rianda House presentation on author Robert Louis Stevenson’s visit to the Upvalley.

“It’s a small, intimate venue,” Ridste said. “They bring in local speakers and you learn things you wouldn’t learn anywhere else.”

“It’s one of our greatest treasures,” said volunteer Bonnie Thoreen. “The library and Rianda House – those are the two centers of community here.”

“It’s good to support Rianda House,” said Gene Armstead, who’d only played poker online. “Plus it sounds like a fun thing to do.”