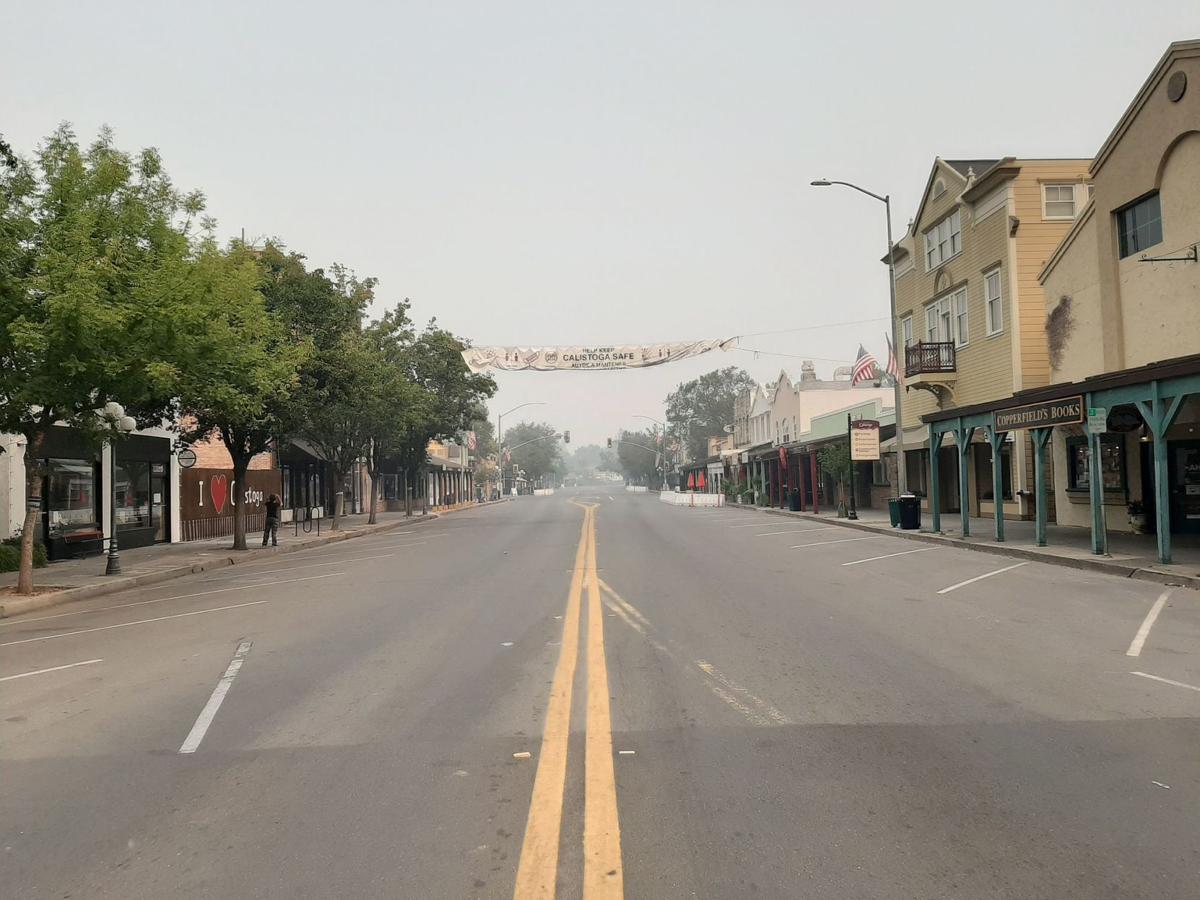 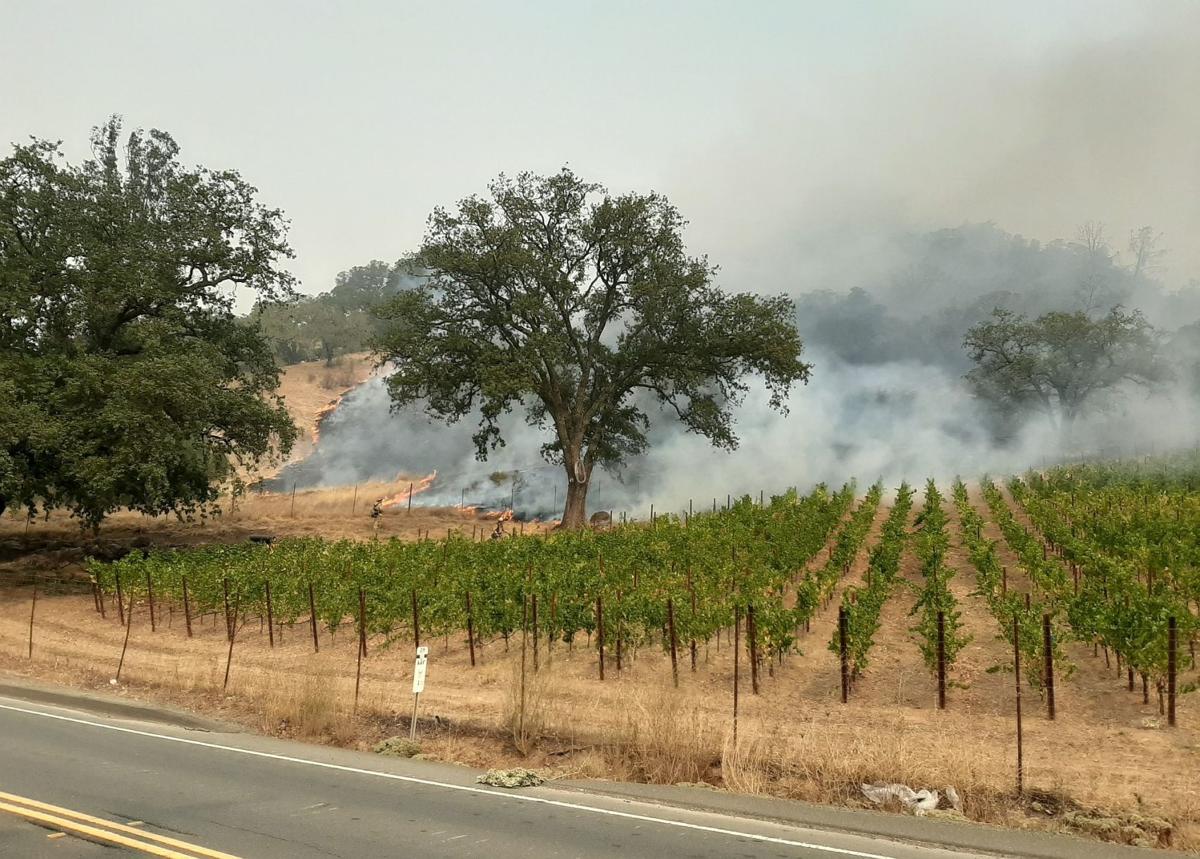 Firefighters monitored the Glass Fire as it crept towards Calistoga Sept. 29 just north of Oat Hill Mine Trail on Hwy. 29 leading up to Lake County. The location of the fire, near the PG&E substation, was a trigger point for evacuating the town. 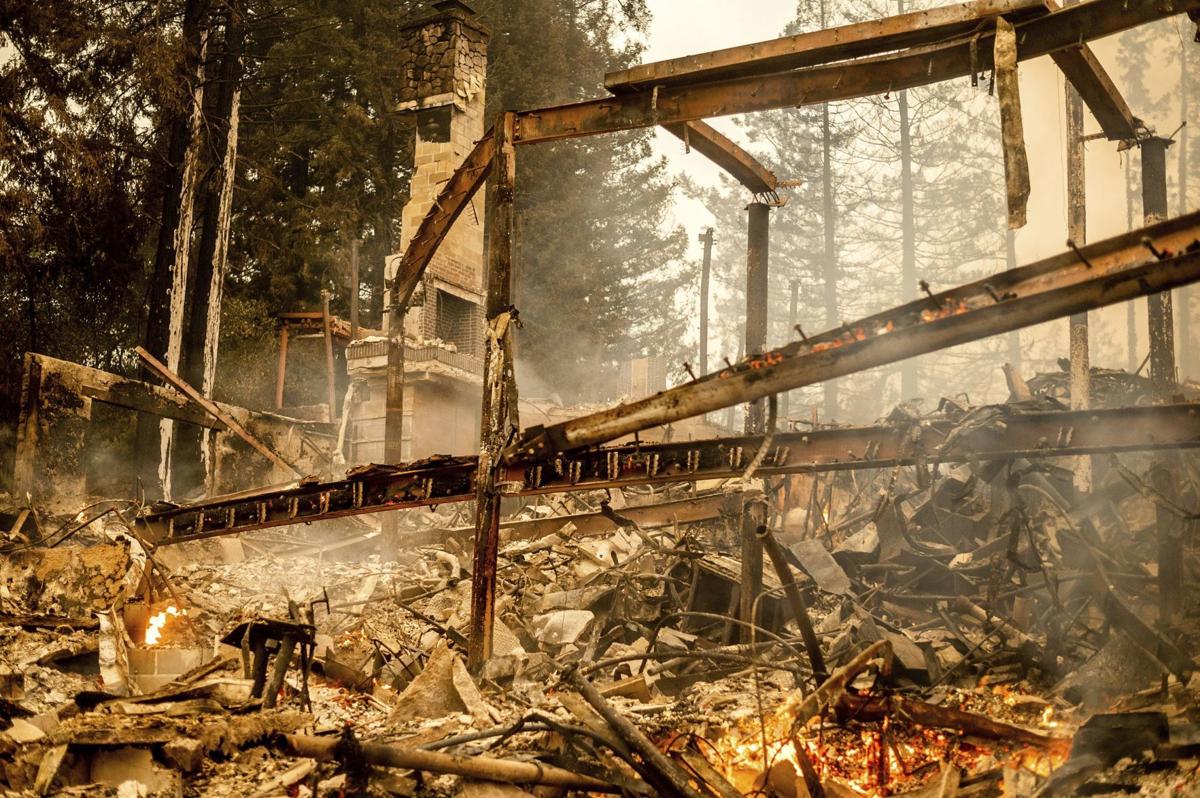 Charred framing remains, Monday, Sept. 28, 2020, at the Restaurant at Meadowood, which burned in the Glass Fire, in St. Helena. 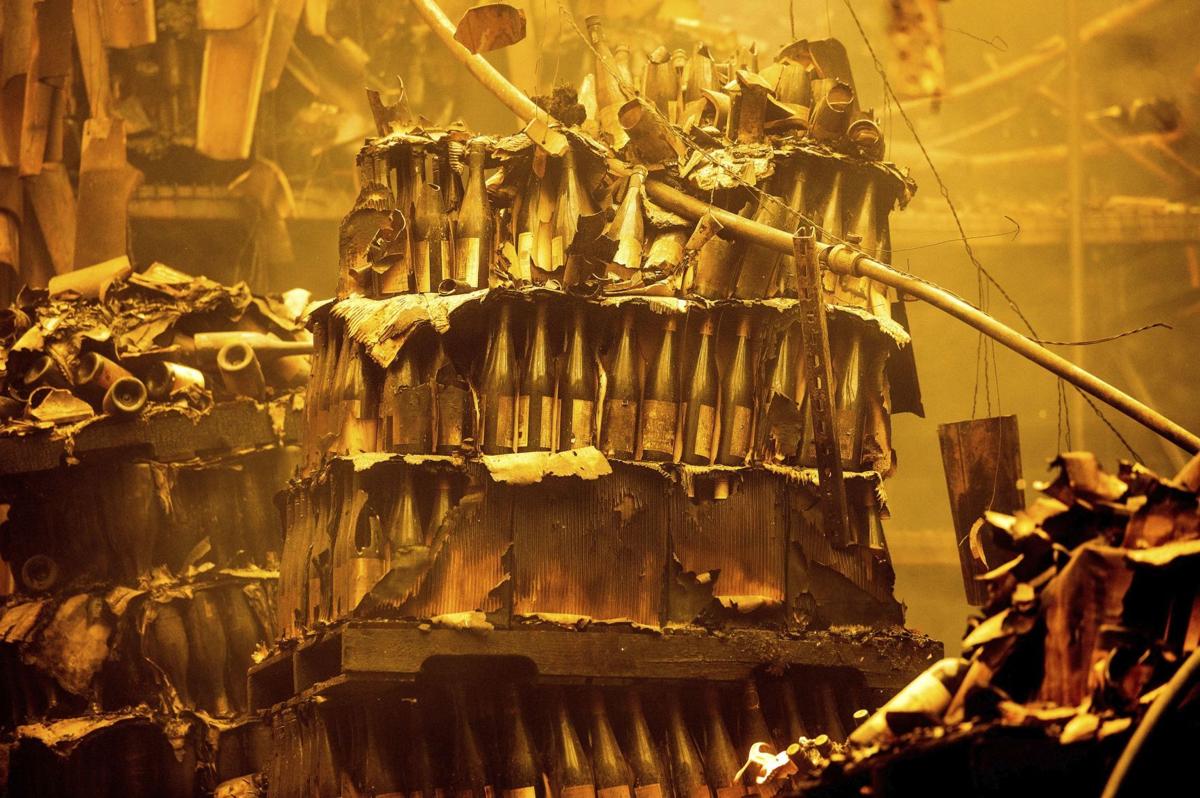 Charred wine bottles rest at Castello di Amorosa, Monday, Sept. 28, 2020, in Calistoga, which was damaged in the Glass Fire. 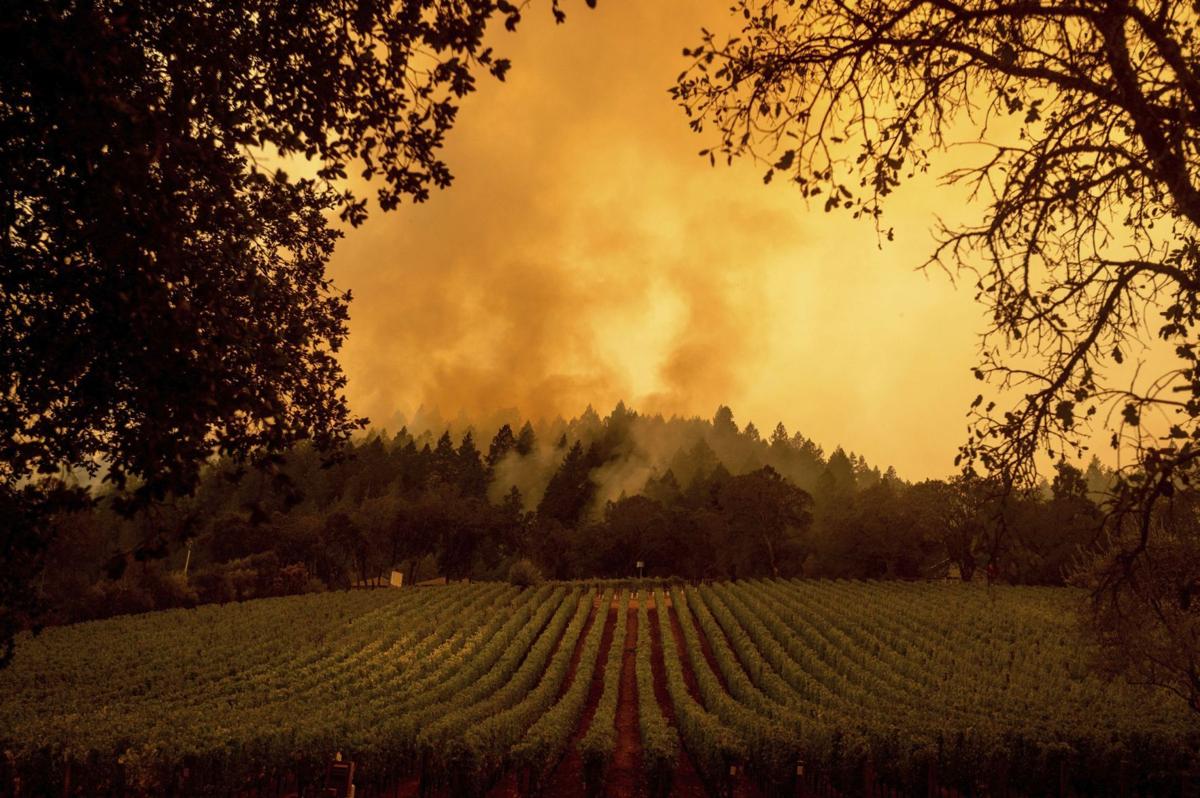 Smoke rises over a vineyard as the Glass Fire burns, Monday, Sept. 28, 2020, in Calistoga.

Updated: 3 p.m. The Glass Fire burned another 6,000 acres Monday night in Napa and Sonoma counties, prompting mandatory evacuation orders for the 5,000 residents of Calistoga and the 3,000 residents of Angwin.

A total of 42,560 acres have burned in the two counties since Sunday morning. In Napa, there was active fire spread overnight outside Calistoga along Silverado Trail at Oat Hill Mine Road and around Bothe Napa Valley State Park, said Janet Upton, Napa County’s public information officer.

No deaths or serious injuries have been reported.

Winds abated Monday and the National Weather Service’s Red Flag warning ended, but the vegetation is so dry that fire continued to spread overnight, Upton said.

Eighty houses have burned in Napa and Sonoma counties, but the tally is an incomplete one, Upton said.

With winds now blowing from the south and southwest, the fire Tuesday was most active outside Angwin and Pope Valley where firefighters are concentrating their efforts, Upton said.

Mandatory evacuations were ordered for Calistoga Monday night and for Angwin, home of Pacific Union College, at 11 a.m. Tuesday. There has been no reported damage inside the city of Calistoga, but the nearby red glow of the Glass Fire loomed large in the eastern hills during the night. Angwin had already been under a partial evacuation order.

Cal Fire was building a fire break near the corner of Highway 29 and Silverado Trail to stop the fire outside Calistoga. In its Nixle alert, the city of Calistoga said the fire department would continue patrolling for embers and potential fire spots.

For a map of evacuation areas and hot spots, go to https://bit.ly/33b8zjq.

Because of the active fires Upvalley, both Highway 29 and Silverado Trail are blocked to through traffic south of Calistoga. Area residents and evacuees are allowed through, Upton said.

As of midnight, 602 people had come to the local evacuation center at CrossWalk Church on First Street in Napa. Because of the heavy demand, a second site for evacuee services was opened at Napa Valley College, Upton said.

The wine industry and tourism are being impacted by the Glass Fire. There are 148 Napa Valley wineries in areas under evacuation orders or warnings, Upton said.

In addition to burning the Meadowood restaurant, the fire also destroyed three resort water tanks, part of the city of St. Helena water system, that served the resort and residents in the Madrone Knoll area. There will be no City potable water available in this area until a temporary solution is worked out, the city announced.

Gov. Gavin Newsom declared a state of emergency late Monday for Napa and Sonoma counties, as well as Shasta County where the Zogg Fire has burned 40,000 acres, and requested a presidential major disaster declaration to boost resources to these areas.

The cause of the Glass Fire has not yet been determined. Pacific Gas & Electric reported Monday that it had “no information indicating the Glass Fire ignition is attributable to our facilities.”

Evacuation orders remained in place Tuesday for Deer Park and the west side of St. Helena. St. Helena Hospital evacuated Sunday as a precaution.

The area’s Spare the Air Alert has been extended through Friday due to fire smoke.

The Glass Fire encompasses the fire that started Sunday morning on the east side of the Napa Valley at Deer Park and three blazes that popped up later that day on the west side and have moved into Sonoma County, threatening residential areas near Santa Rosa.

At least 426 people had registered for shelter assistance by Monday, and Napa County officials expect that number to grow.

A fire north of St. Helena has led to evacuations in Deer Park and along Silverado Trail between Calistoga and St. Helena.

Spare the Air alerts issued through Friday due to wildfire smoke

The number of county residents hospitalized with COVID-19 rose to six on Tuesday.

Chateau Boswell, a mainstay on the Napa Valley wine circuit for over 40 years, was destroyed Sunday in the Glass Fire.

Solage Calistoga is holding a drive-through food distribution event from 11 a.m. - 3 p.m. on Sunday, Oct. 11 for Auberge employees affected by the Glass Fire.

Many medical services are being offered at clinics while the hospital repairs fire damage to grounds. 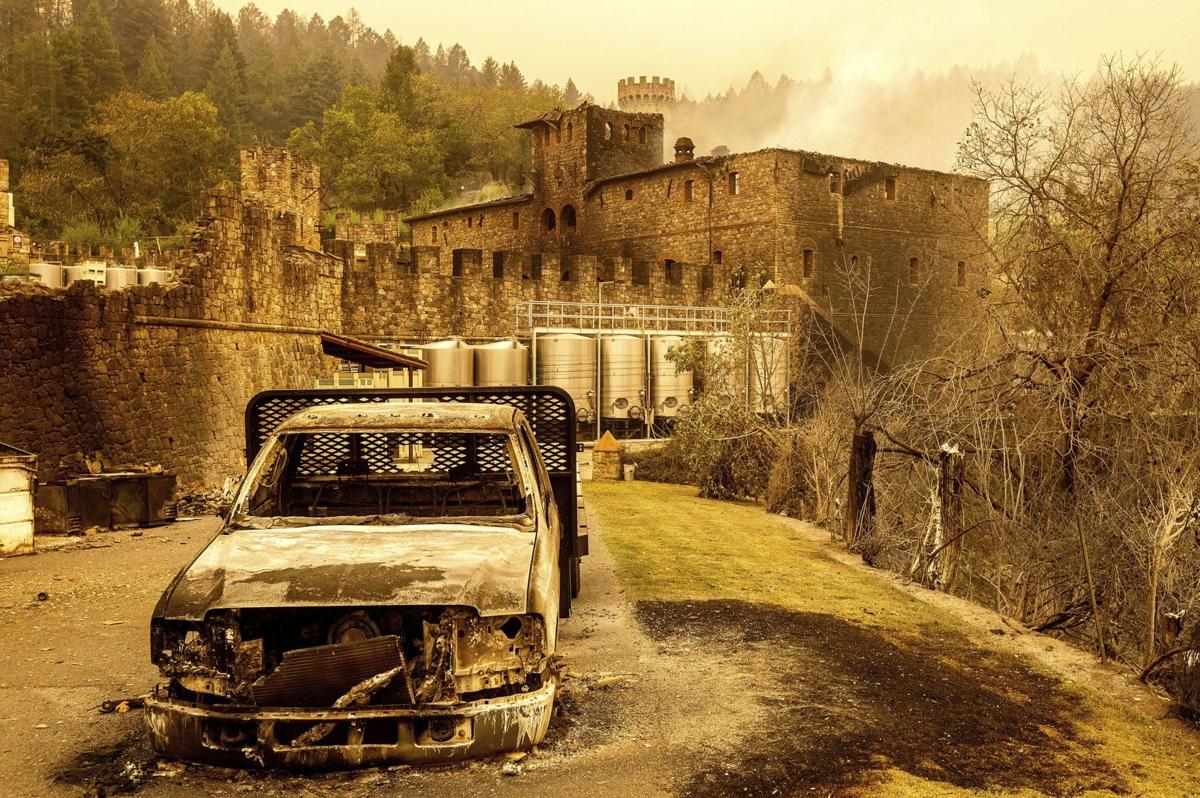 A damaged vehicle and wine warehouse stand, Monday, Sept. 28, 2020, in Calistoga at Castello di Amorosa, which was damaged in the Glass Fire.

Firefighters monitored the Glass Fire as it crept towards Calistoga Sept. 29 just north of Oat Hill Mine Trail on Hwy. 29 leading up to Lake County. The location of the fire, near the PG&E substation, was a trigger point for evacuating the town.

Charred framing remains, Monday, Sept. 28, 2020, at the Restaurant at Meadowood, which burned in the Glass Fire, in St. Helena.

Charred wine bottles rest at Castello di Amorosa, Monday, Sept. 28, 2020, in Calistoga, which was damaged in the Glass Fire.

Smoke rises over a vineyard as the Glass Fire burns, Monday, Sept. 28, 2020, in Calistoga.