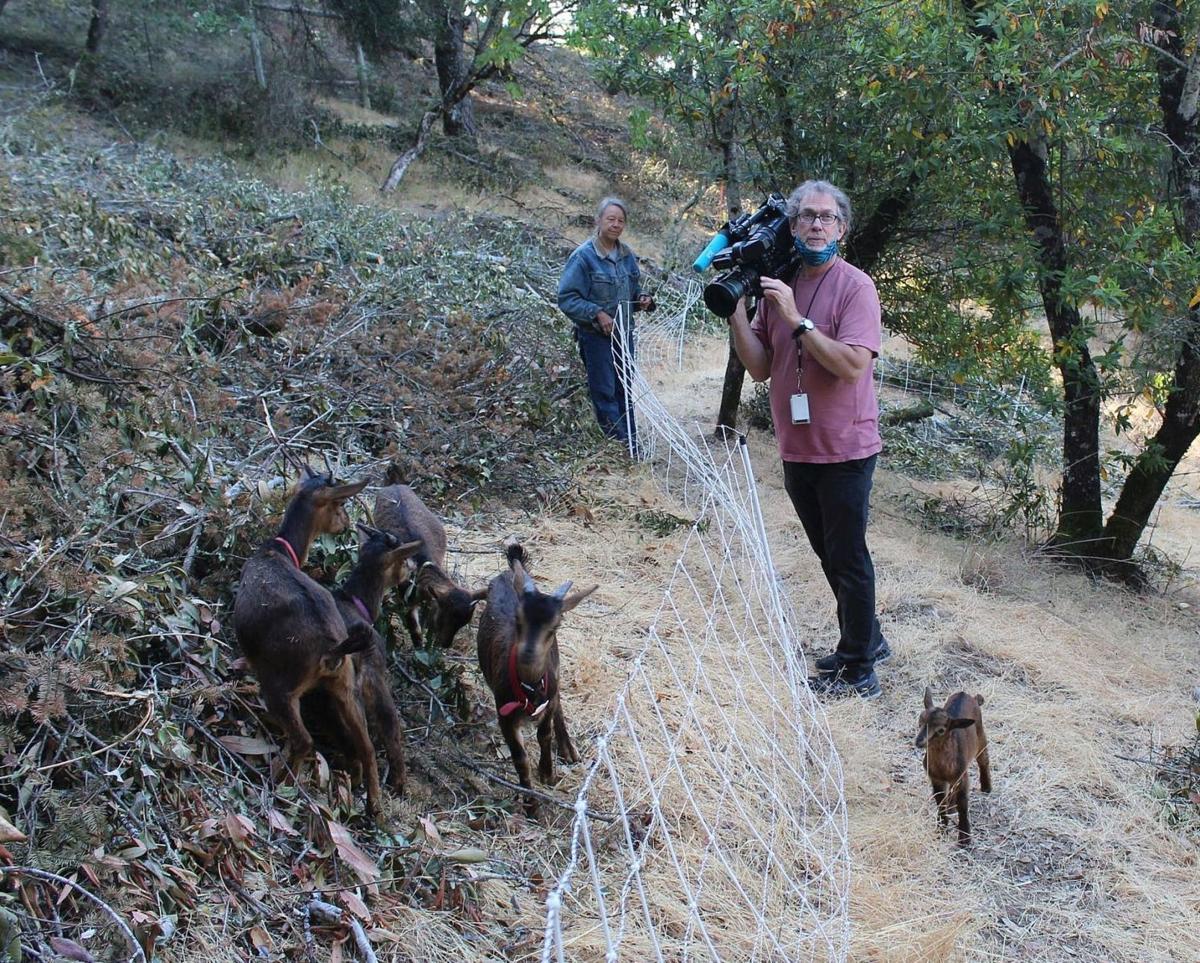 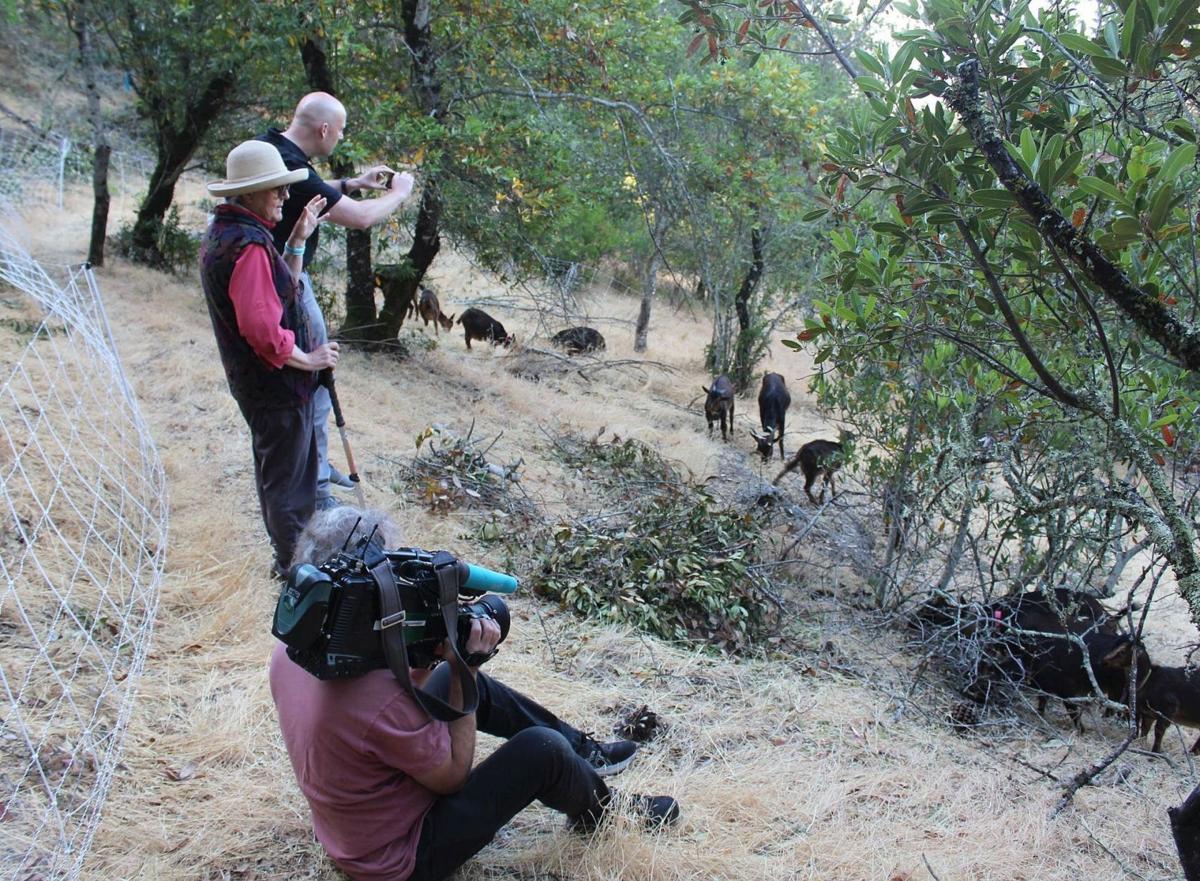 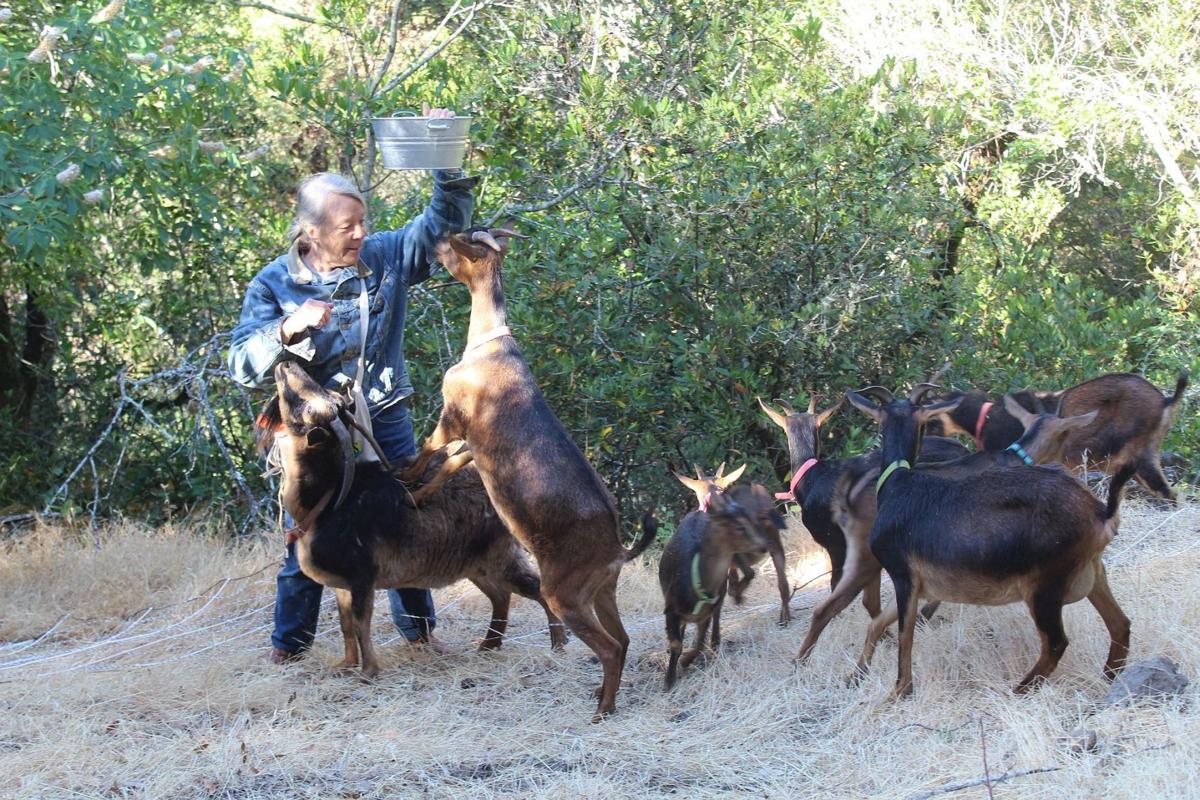 One way to get her goats back if they breach the fence is to entice them with alfalfa pellets, said Charlotte Williams, as seen recently at a property in Angwin. 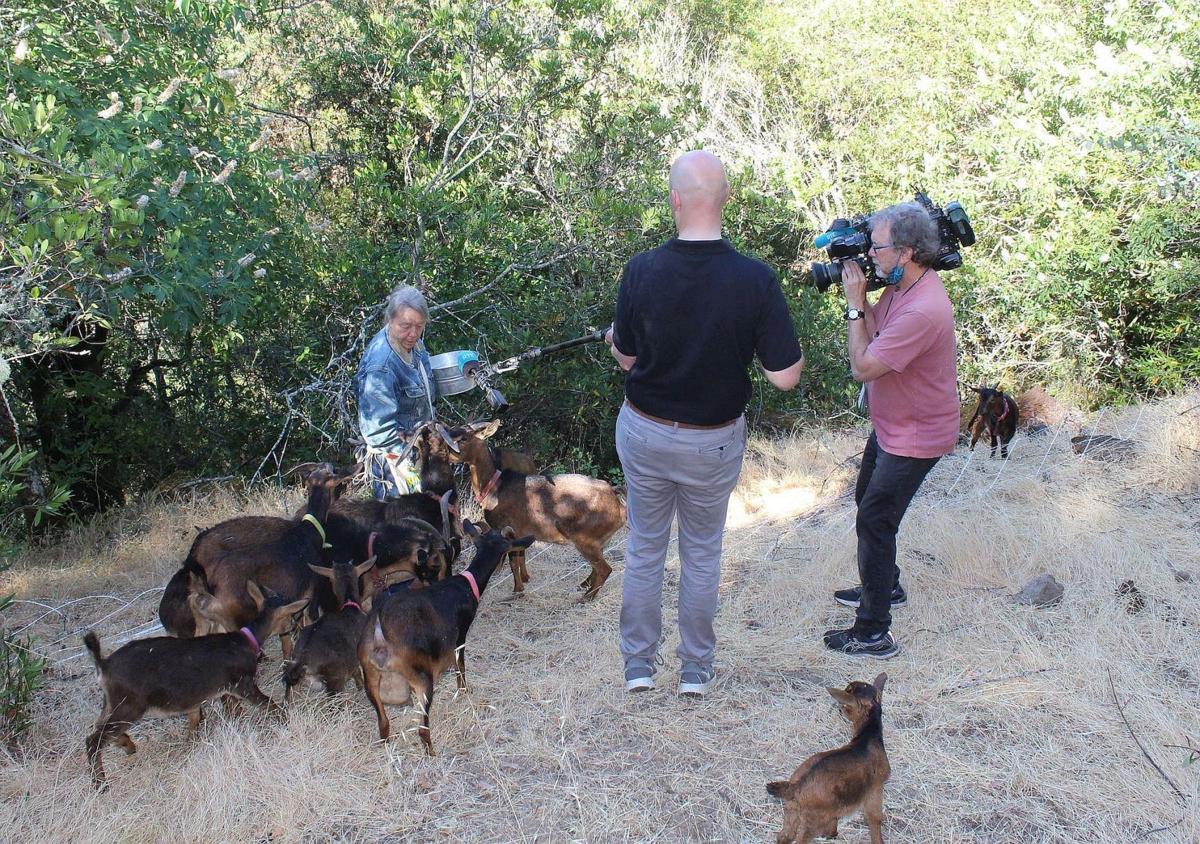 After only three weeks in the goat-scrub eating business, Calistoga's Charlotte Williams caught the attention of Irish TV journalist Brian O'Donovan, center, and his cameraman Murray Pinczuk who caught up with her at a property in Angwin June 2.

She’s only been in business a few weeks, and Charlotte Williams and her wildfire-preventing, shrub-eating goats have already made international news.

In the early morning of June 2, Brian O'Donovan of Irish TV RTÉ and cameraman Murray Pinczuk navigated their way up to a property on Howell Mountain where Williams’ two dozen goats were at work munching through underbrush.

O’Donovan is from the news station's Washington, D.C. bureau. He was searching the web for subjects for his piece on wildfire resiliency in Napa Valley, when he happened on a story The Weekly Calistogan ran May 13,profiling Williams and her newly operational goat-grazing business (Grazing through wildfire fuel).

The journalist interviewed vineyard and homeowners in the area, but Williams and her goats turned out to be a major part of the story.

Williams explained on camera why she started the business of renting her goats out to property owners, and how they go about eating through the brush that feeds wildfires.

The goats were stationed at the Angwin property of Elaine de Man, who explained how the threat of wildfires and climate change has affected the area’s environmental dynamic for homeowners and businesses.

Williams said she is surprised at how fast the business has taken off. “I’ve had so many requests for estimates, I could probably even work in Ireland sometime soon.”

Willliams can be reached at goats@sonic.net.

Calistoga's Charlotte Williams has started a business renting out goats to graze through Napa Valley's abundant underbrush, reducing the fuel that feeds wildfires.

A helicopter capable of 1,000-gallon water dumps and 46 more firefighters will be assigned to protect the county this year, officials have announced.

Thousands of fire-damaged trees are being removed at a cost of millions of dollars in the wake of Napa County wildfires.

Sunrise Horse Rescue was named a finalist in a nationwide contest to win a much-needed Land Rover. Help them out by voting online by June 28.

Residents at Rancho de Calistoga have turned what was once an eyesore into a community garden. They will hold a fundraising flea market from 9 a.m. to 3 p.m., Saturday, June 26.

Crows and ravens have cast a spell over humans

Tim Carl delves into the mystery of crows and ravens to discover what has made them so central a character to so many cultural stories throughout history.

One way to get her goats back if they breach the fence is to entice them with alfalfa pellets, said Charlotte Williams, as seen recently at a property in Angwin.

After only three weeks in the goat-scrub eating business, Calistoga's Charlotte Williams caught the attention of Irish TV journalist Brian O'Donovan, center, and his cameraman Murray Pinczuk who caught up with her at a property in Angwin June 2.