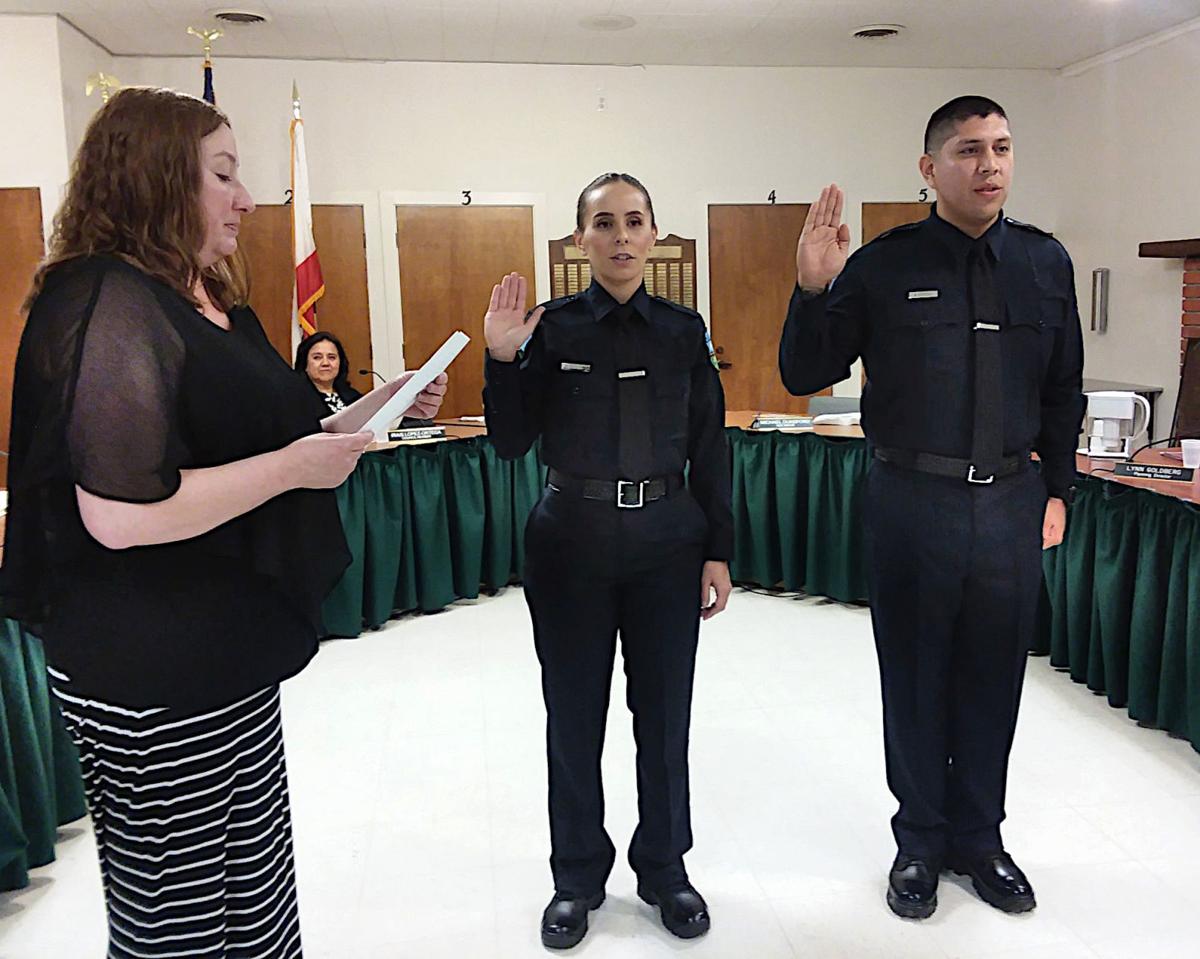 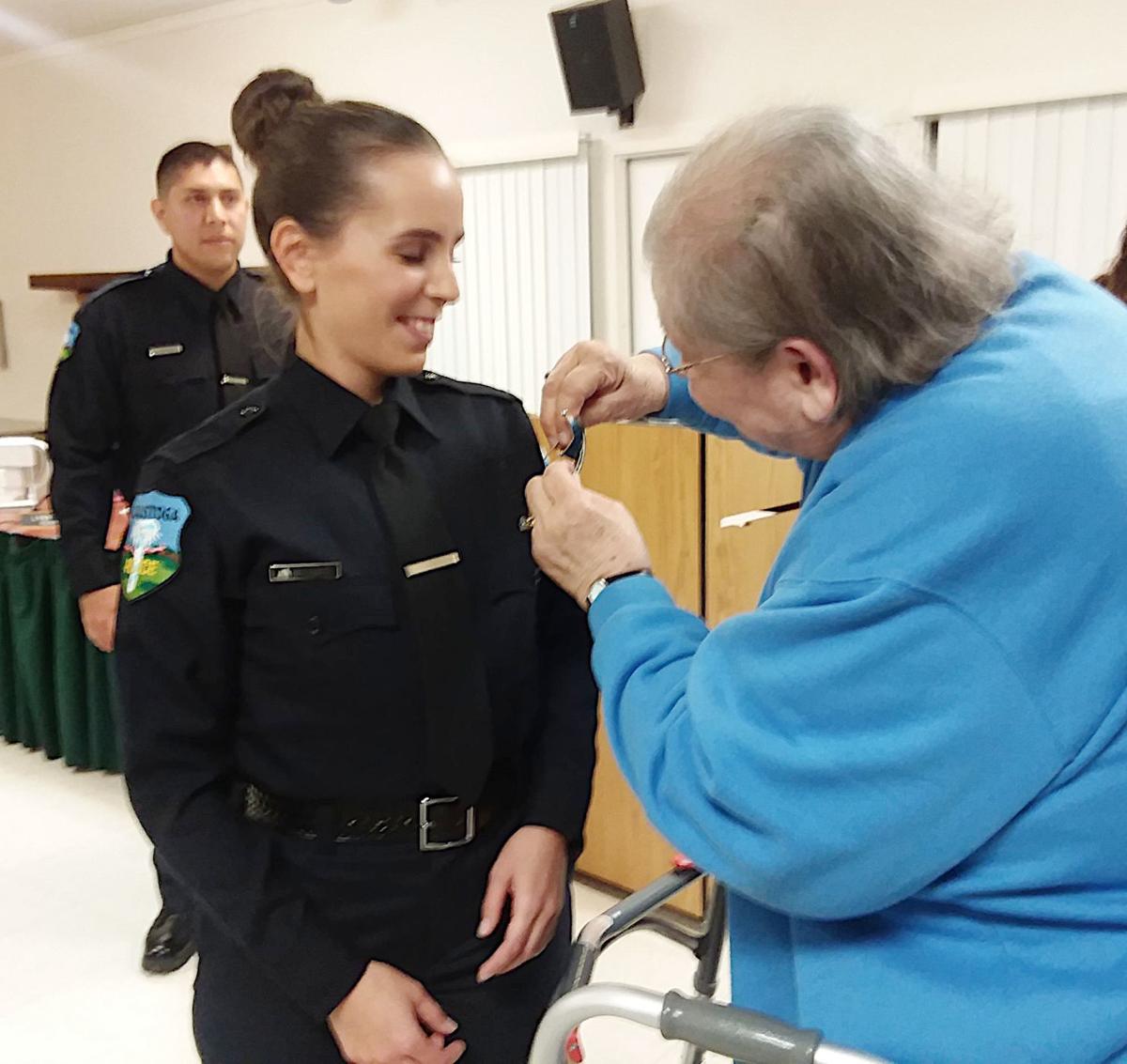 New Calistoga Police Officer Katie Hutchins was pinned by her grandmother on Jan. 7. 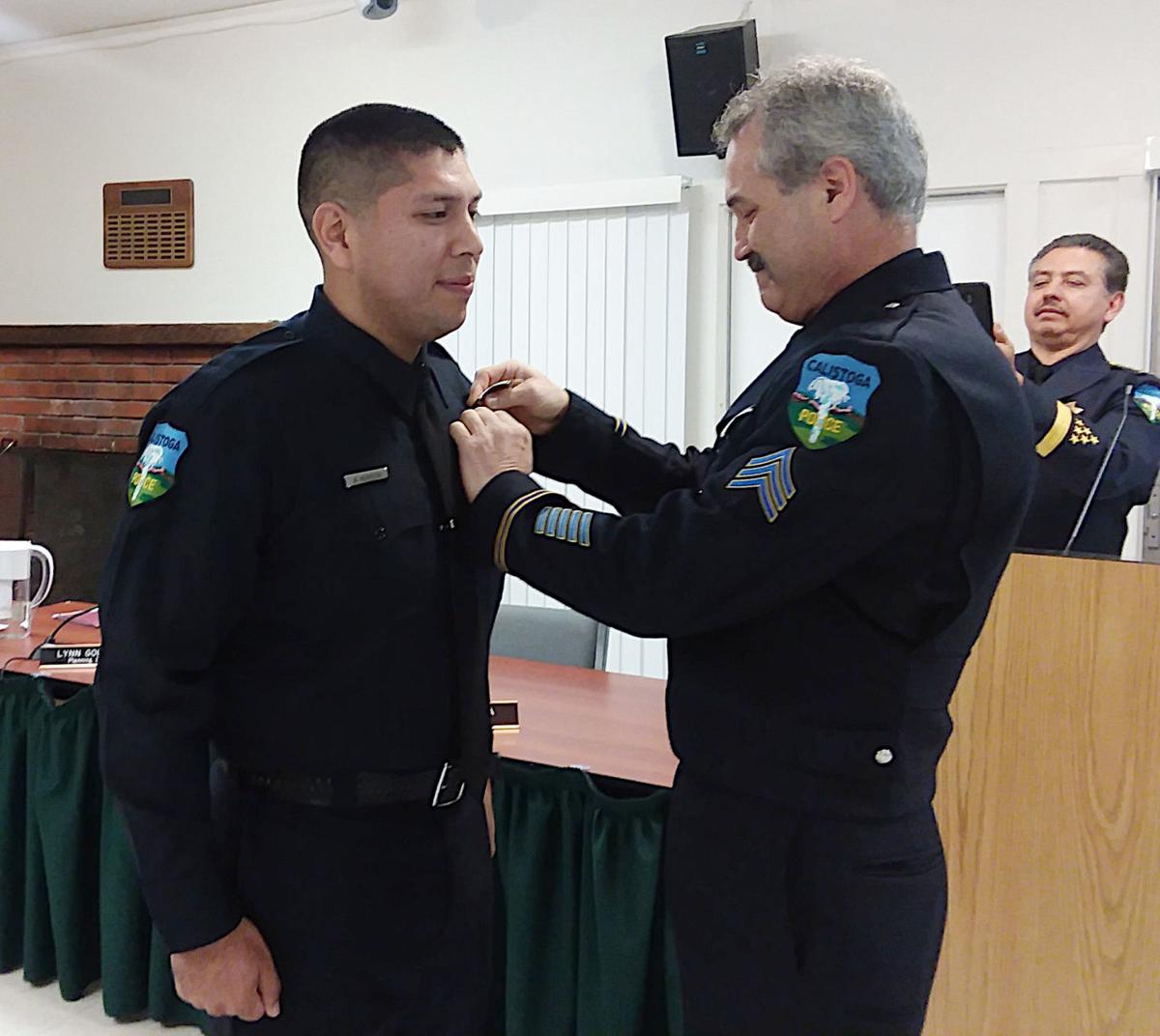 The additions will help fill out the ranks of the department, which has been understaffed by 40 percent for the past year.

Hutchins and Herrera-Ortega were sworn in on Tuesday.

Hutchins is a graduate of Santa Rosa Police Academy. She said, “This is an honor and an amazing opportunity. I love that people here are so active, and out walking their cute dogs.”

Herrera-Ortega is from Calistoga and served in the Marines Corp. He also graduated from Sonoma State University with a degree in psychology. Calistogans can frequently see him jogging around town, he said.

Webster is a recent graduate of the Napa Dispatch Academy. Department dispatchers are the “face and voice of the community,” said Police Chief Mitch Celaya, “And we’re thrilled to have her.”

In November, the department also promoted two officers to the position of Police Corporal: Kristine Romo and Nicholas Dellia. Part-time Police Dispatcher Wendy Ramirez-Munoz was promoted to a full-time position.

Celaya also said the department has made offers to two more potential officers who could be on board soon.

The police department has also updated body cameras for the officers, and is making upgrades to police vehicles by installing computers known as mobile data units. The department also purchased new radar signs to help with speeding, and has formalized an agreement with the St. Helena Police and Fire Departments, Celaya said.

Tobacco education grantThe Calistoga Police Department has also been awarded a Department of Justice Tobacco Grant for $472,600 to fund a School Resource Officer position for 2-1/2 years. The officer will address tobacco and vaping education, prevention, enforcement and related health issues for Calistoga’s youth.

Between 2016 and 2018, among Calistoga youth, there was a decrease in perception that tobacco products cause harmful health issues, from 78% to 58%, Celaya said. Use of the grant will take a multidisciplinary approach with education, training for school and police department staff, and community outreach, including working with the UpValley Family Centers.

The Calistoga Police Department has promoted two of its officers to the position of Police Corporal.

The Calistoga Police Department is taking a step toward modernization with the purchase of new computer equipment for its patrol cars.

Calistoga Junior Senior High School is starting to crack down on vaping, which can be harmful to students' brains, lungs, and development during growth.

July fatality on Foothill Boulevard run over by 'multiple vehicles'

No arrests have been made in the case of a man who was found dead the morning of July 18 on Foothill Boulevard in Calistoga.

How Do You Talk To Your Teens About Alcohol and Drugs?

“I feel defeated,” said the mother of a teenager last fall, at a focus group for UpValley parents about youth substance and alcohol use. “How …

Security guard arrested in connection with burglary at Beringer Vineyards

St. Helena turns to Plan B after lease talks with college collapse

The city of St. Helena is hoping that its Railroad Avenue buildings will provide sufficient space for city workers until a new City Hall is built.

Students and teachers are urged to apply for Napa Valley Community Foundation scholarships for the 2020-2021 academic year by March 5. Awards range from $300 to more than $5,000 per year.

The St. Helena City Council plans to ban the sale of flavored tobacco in an effort to fight underage vaping.

Calistoga Police Corporal Kristi Romo has been appointed to the position of Acting Sergeant, filling the position after Sgt. Matt Freese retired Jan. 31.

Calistoga Police Officer and Dispatcher of the Year honored

Providing Upvalley youth an alternative to the criminal justice system

The Upvalley Youth Diversion program is a one-time deal that provides youth with an alternative to the juvenile criminal justice system.

The St. Helena City Council is renewing its push to ban the sale of flavored tobacco products that critics say are causing a public health cri…

New Calistoga Police Officer Katie Hutchins was pinned by her grandmother on Jan. 7.