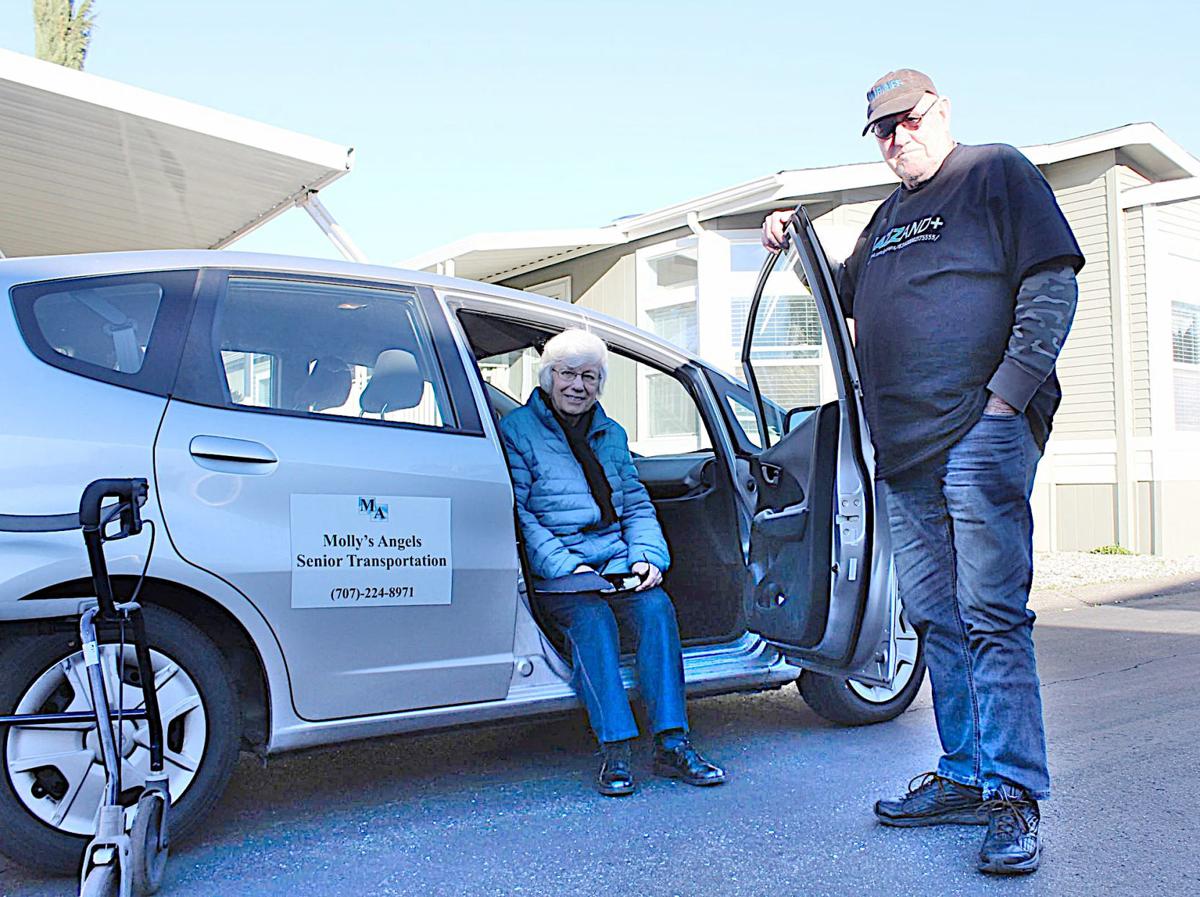 Molly's Angel 's driver Greg Lake with one of his regular passngers, Renata Schriener of Rancho De Calistoga. A former Marine in Vietnam, Lake is one of the few drivers Upvalley who takes seniors to their various appointments for free. 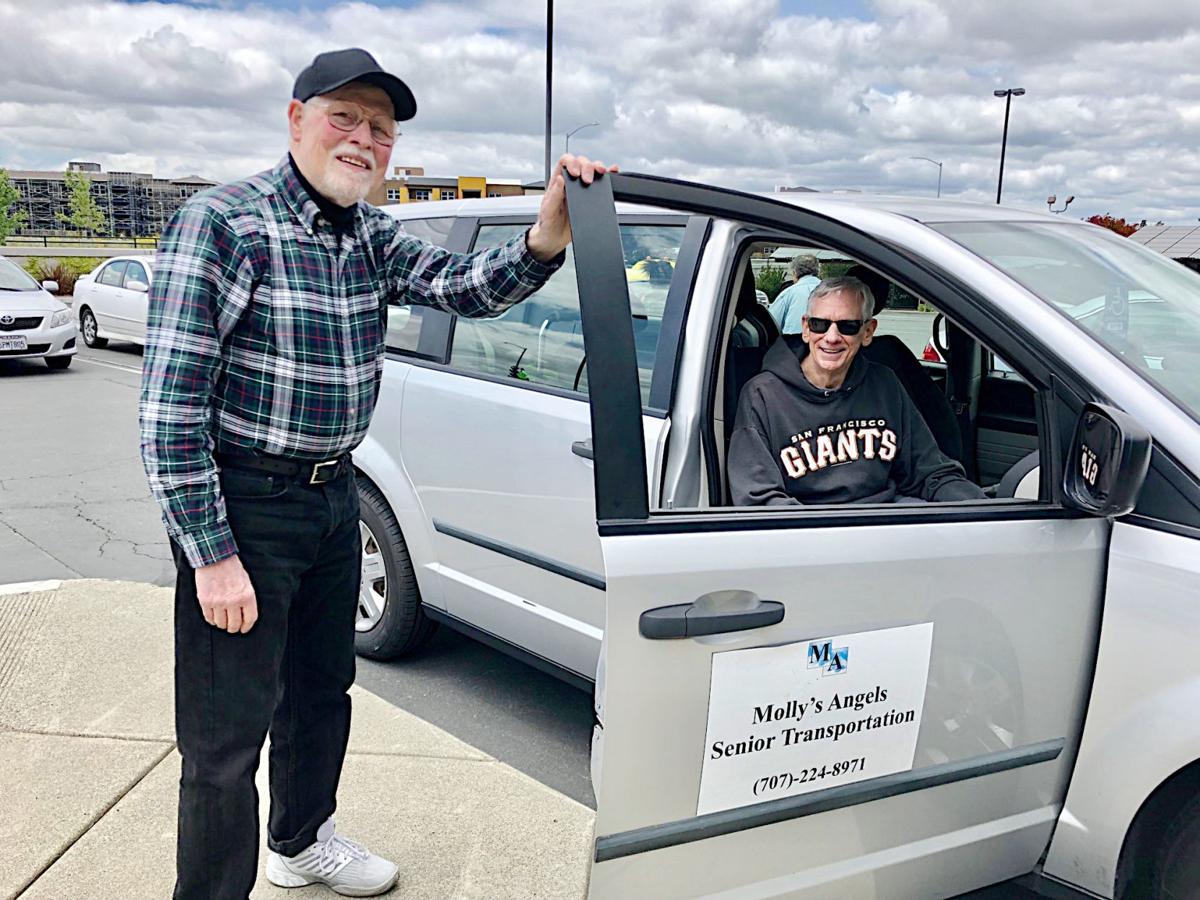 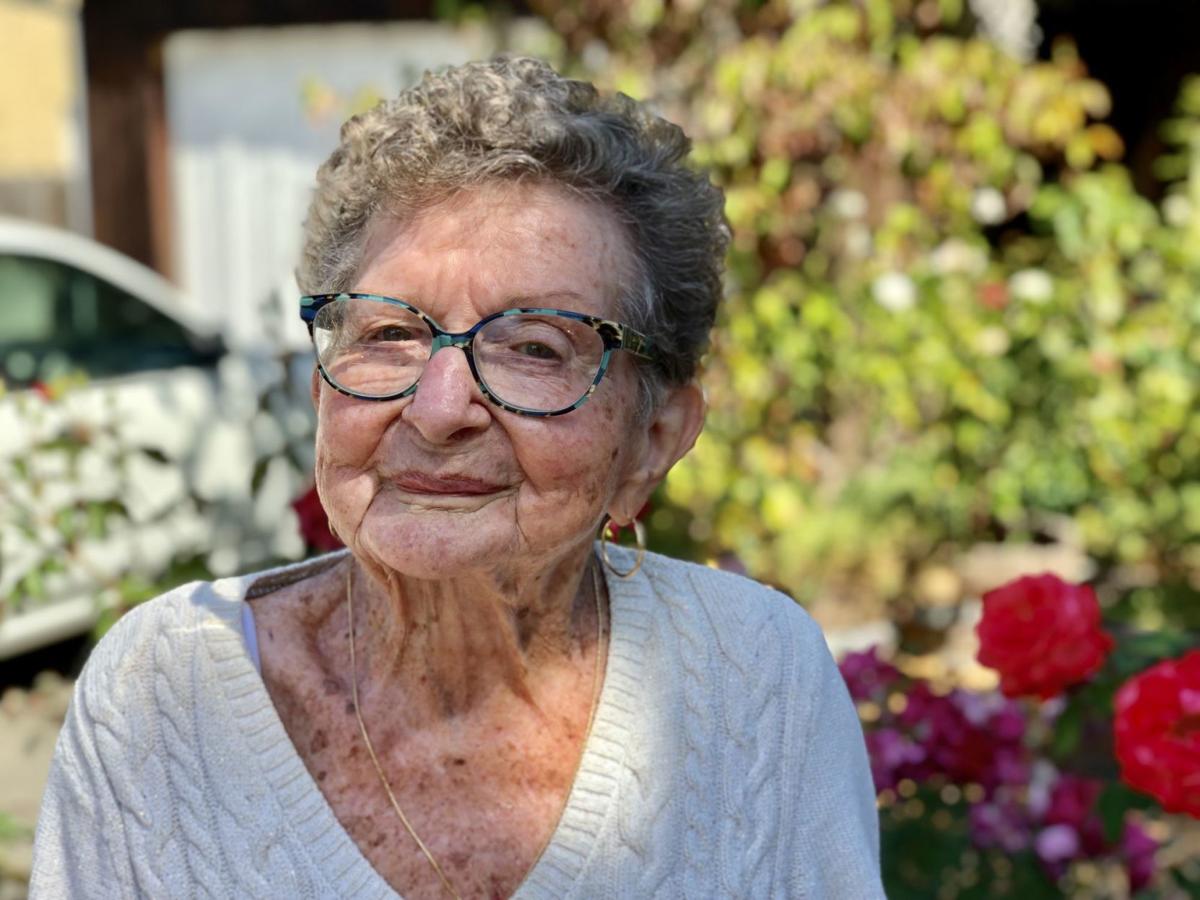 Muriel Synder is 97 years old and not only gets rides from Molly's Angels to her medical appointments, but also volunteers with their Telephone Reassurance Program.

Serving as a Marine in Vietnam in the early 1960s, Greg Lake saw a lot of action. In less than a year, he led 226 patrols as the point man, leading fellow soldiers through hostile, unsecured territory, regularly dodging sniper fire and watching out for booby traps.

Now, at 75, he lives in Calistoga and regularly drives for Molly’s Angels, taking seniors to their doctor’s appointments for free.

According to Lake, from a service point of view, it’s not such a stretch.

“Marines get things done,” he said. “If I’m capable and in good health, sure, I’ll do it. If you have a chance to help someone, that’s a no-brainer.”

Lake is originally from Oakland. He joined the Marine Corps out of high school in 1962, and reported to training at Marine Corps Recruit Depot, San Diego. He arrived in Vietnam in August 1965 with Company D, 1st Battalion, 7th Maine Regiment.

At 21 years old, he was one of the older guys in the unit, he said. Soon, he found himself taking sporadic sniper fire for six days during Operation Starlite, America’s first major battle in the Vietnam War.

It was not the Vietnam that’s depicted in movies like “Platoon,” Lake said. Bases had not yet been built.

“You didn’t go back to the base for a rest. You lived out in the boondocks. You just lived in the rice paddies,” he said. “There is no way to describe to someone who has not been in combat what it is like having someone shooting at you. The rounds are coming by are so close you can feel the heat [from them]. To see someone next to you get shot, killed or wounded it is not like a game or the movies anymore. I was only there for a year. That was plenty.”

A turning point for Lake happened when he came face to face with a Vietnamese soldier, with a rifle pointed at him.

“I’m standing there with my M14. All the Marine Corps training said ‘shoot him,’ but our eyes locked for a moment and we both backed up,” Lake said. “I don’t know this guy, he’s never done anything to me, if I were in his shoes, and there was a foreign army, I would be him.”

Lake snapped his fingers. “Just that fast in my brain I said, ‘I’m not shooting him. And I hope to God he doesn’t shoot me.’ I thought, ‘this is very wrong.’ I realized I was the bad guy. I was the invading military. From that day forward I still led all the patrols, but I never fired my rifle again.”

The road to Molly’s Angels

Lake was discharged from the Marine Corps in 1966.

“My original plan was to do 20 years. The war brought that to a screeching halt. I would not do it again,” he said.

Lake went to college, got a degree in art and teaching. Due to a glut of teachers at that time, he became a sign painter.

The adjustment to civilian life was tough. “I was always very tense. People would tell me I radiated hatred. People didn’t like to be around me.”

Finally, he went to the Veterans Administration and filed a PTSD claim. It changed his life.

After more than 55 years of drinking, he quit cold turkey. Then he also quit smoking. “I was in prison to alcohol and cigarettes,” he said.

Lake has no tattoos except for the dates of when he quit drinking and then smoking, on the inside of his arms.

The rewards of driving seniors

Molly’s Angels is a local organization, based in Napa, providing free transportation to seniors in Napa Valley who can no longer drive. Funding comes from the Napa/Solano Area Agency on Aging; a grant from the Gasser Foundation to cover rent, and additional support from grants from health organizations like Adventist Health/St. Helena Hospital Foundation, iTN America and St. Joseph’s Health.

“The rest is private donations and our annual Golf Tournament is our main fundraiser. This year that will be held on July 15 at the Eagle Vines Golf Course,” said Julie Orr, Molly’s Angel’s executive director.

The 20-year old organization is short on drivers, however, especially those able to drive in the Upvalley.

“This is a huge issue Upvalley – we often get calls from seniors in Calistoga needing to get to appointments in Santa Rosa and it’s a struggle to find volunteers to help,” Orr said. “ We know as well our population in this area is the fastest-growing demographic, and right now, there is no alternative solution being proposed other than kindly volunteers offering their help through organizations like Molly’s Angels.”

Lake has been driving for the organization for about a year. Around Christmas time in 2018 he had open heart surgery, and used Molly’s Angels to go to the hospital.

At the time he thought, “What a good thing to do. I’m retired, have a good car, and a lot of seniors in my park (Rancho De Calistoga) that need help.”

Lake looks after several senior residents in Calistoga, driving them to medical appointments, mostly in Santa Rosa. He admits he’s stretched thin. It’s not unusual for him to drive five or six days a week.

“There are one or two more drivers, but I’m kind of like the Lone Ranger out here,” he said. “I can’t take everyone. I’m only one.”

Lake is also an advocate for the organization, handing out his Molly’s Angel’s cards in doctors’ offices. “If I were in charge every senior, nation-wide, would have access to this free service.”

Renate Schreiner lives at Rancho de Calistoga and Lake is frequently her driver. She said she’d be “really lost without the service. I can’t say enough good things about Molly’s Angels.”

Although not required to do so, Lake waits, sometimes many hours, throughout the appointments.

“Greg waits and waits, he brings a book, he stays a long time. He probably has better things to do with his time, but this is what he is devoted to and it’s what he does,” Schriener said.

Drivers have to have a clean driving record and pass a background check. They don’t get reimbursed for mileage.

Lake says he is rewarded by “the smiles, the hellos and the thank yous ... it’s overwhelming. Some of these 90-plus year olds, they’re just sweet little old ladies that need help. Treat others as you would like to be treated. You feel good doing good things,” he said.

Schriener says she and Lake talk a lot during the drives, and she also takes him to breakfast or lunch.

Aside from waiting, Lake takes it one step further. Once out of the house, there are other errands to run; to the pharmacy, the grocery store or elsewhere, he says.

“You’re stuck in the house all day. Now, you’re out in the car with me. What would you like to do to make it fun?”

By offering free transportation, Molly’s Angels support seniors living in their own home. They are now in need of drivers from Calistoga and St. Helena.

Napa County senior services such as Molly's Angels and Meals on Wheels could see funding reductions.

Good morning, friends. I’m assuming because you are reading Senior Corner — and I’m very pleased that you are — that you are a senior.

My husband and I manage Rancho de Calistoga. For those of you who don’t know we are a 55+ community on the west side of town with 184 residents.

Signs of the times: Those more unfortunate and what we can do

Helping those less fortunate than ourselves starts with awareness.

Molly's Angel 's driver Greg Lake with one of his regular passngers, Renata Schriener of Rancho De Calistoga. A former Marine in Vietnam, Lake is one of the few drivers Upvalley who takes seniors to their various appointments for free.

Muriel Synder is 97 years old and not only gets rides from Molly's Angels to her medical appointments, but also volunteers with their Telephone Reassurance Program.