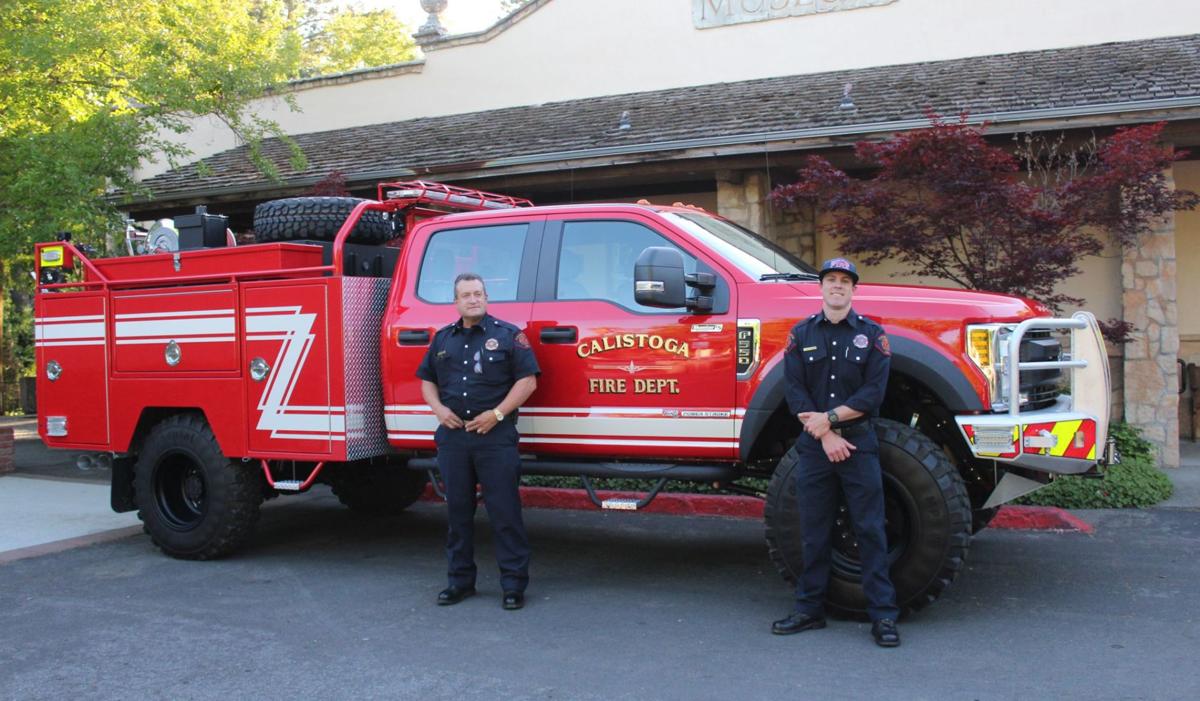 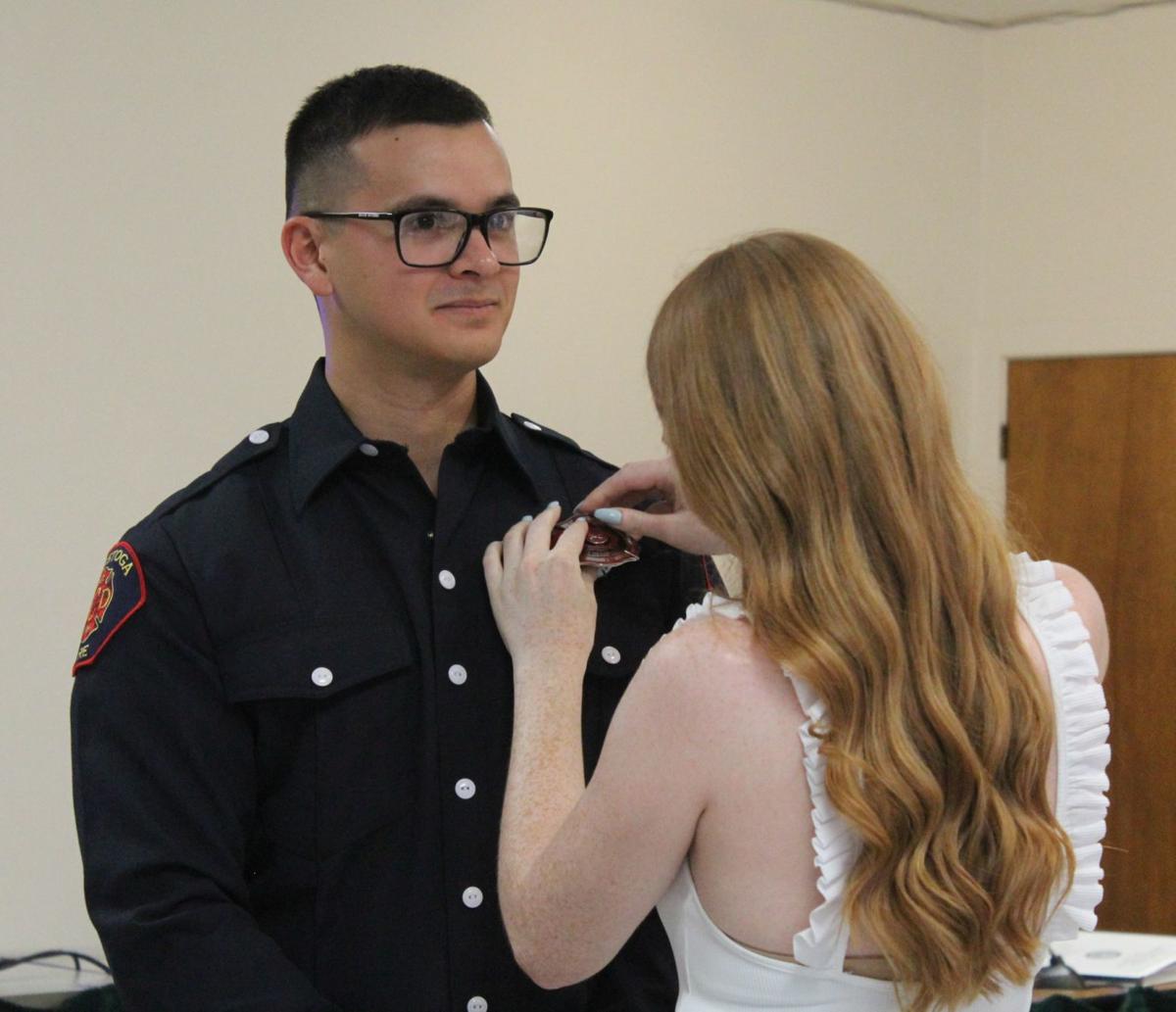 After being sworn in, new Calistoga Firefighter Kurt Seeberger was pinned by his girlfriend, Erin Calvert. 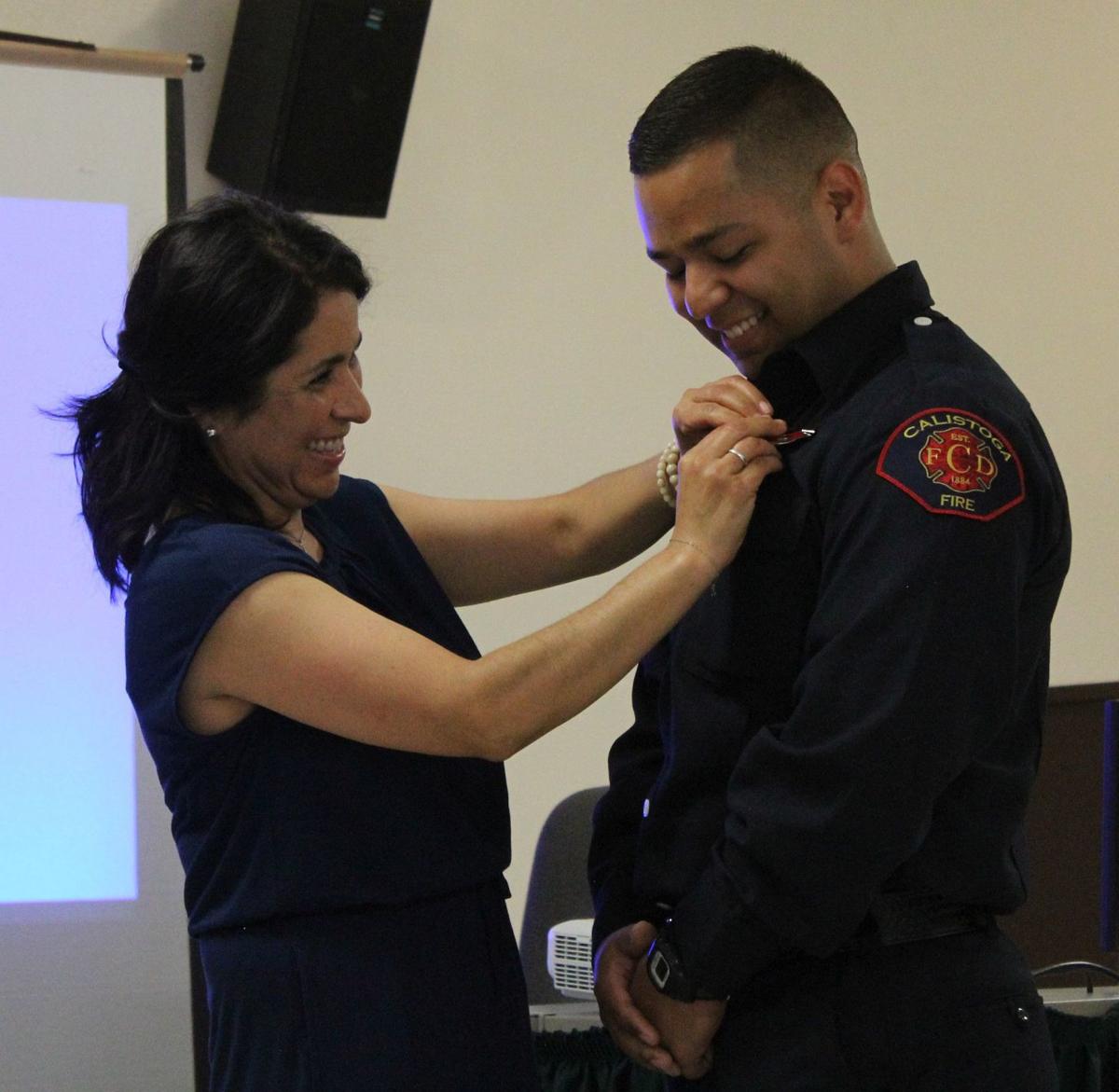 After being sworn in, new Calistoga Firefighter Sebastian Segura is pinned by his mother June 4.

The City of Calistoga is making headway on improvements to the Fire and Police Departments with staff additions and equipment upgrades.

They come to the department on the heels of part-time firefighter Adam Ramirez, who was sworn in as full-time in April.

The city also formally accepted the donation of funds from the Calistoga Firefighters Association for a new Type 5 Brush Truck.

Earlier this year, Fire Chief Steve Campbell reported the addition of three firefighting vehicles during the past year including the purchase of a fire engine in December, and a generous anonymous donation of $420,000 from a Calistoga resident for another Type 3 engine that the department will take delivery of in late fall.

City Finance Director Gloria Leon also noted during the meeting that recently approved salary increases for city firefighters, and the new rigs and equipment have drawn more applicants to the department.

The department is also moving ahead with fire safety sirens. Campbell explained it’s a two-part project, finding and getting the 50-foot poles, and a separate operating system from the FCC. The project is being funded by Illuminations Technology California, the new company occupying the former Carmel Gallery space on Lincoln Avenue, and headed by Mayor Chris Canning. There will be opportunity for public comment on the sirens sometime in July.

The public will also soon be receiving courtesy notices for weed abatement.

“It’s for your own safety and the whole neighborhood,” Canning said.

The public is also reminded that all fireworks are illegal within city limits, with the exception of the display at the fairgrounds July 4.

The city has also approved renewing a three-year agreement with Cal Fire for fire dispatch services. Calistoga is not capable of dispatch services for the fire department. The city and the county will split the $120,000 cost in half.

The city has also extended Police Chief Mitch Celaya’s contract through December. The chief was hired in December 2012 and intended to retire June 30.

The extension was provided as there have been delays in recruiting for a new police chief, and a desire to evaluate alternate means for providing police services, including contracting with the county sheriff’s office, and sharing services with other jurisdictions, like St. Helena, the staff report said.

The action will have no impact on the general fund as costs related to the employment extension agreement was factored into the budget.

Calistoga has a “new” full-time firefighter. Adam Ramirez has served with the Calistoga Fire Department part-time for just under two years, an…

On Tuesday, the Mountain Volunteer Fire Department of Calistoga was awarded more than $8,000 worth of life-saving equipment by the Firehouse S…

CALISTOGA — The Calistoga Police Department is at a crossroads. At the city budget meeting May 9, Police Chief Mitch Celaya told the city in n…

Completing a process that began in March, the city council on Tuesday approved the FY 2019/2020 budget, with $12.5 million in reserves, and a …

After much public testimony, the Calistoga City Council on Tuesday approved the purchase of three new warning sirens to alert the town in emer…

Fire trucks are driving along my street, I feel my pulse accelerating. Where are they going? Is there a fire? Am I ready to evacuate? Quick, w…

After being sworn in, new Calistoga Firefighter Kurt Seeberger was pinned by his girlfriend, Erin Calvert.

After being sworn in, new Calistoga Firefighter Sebastian Segura is pinned by his mother June 4.