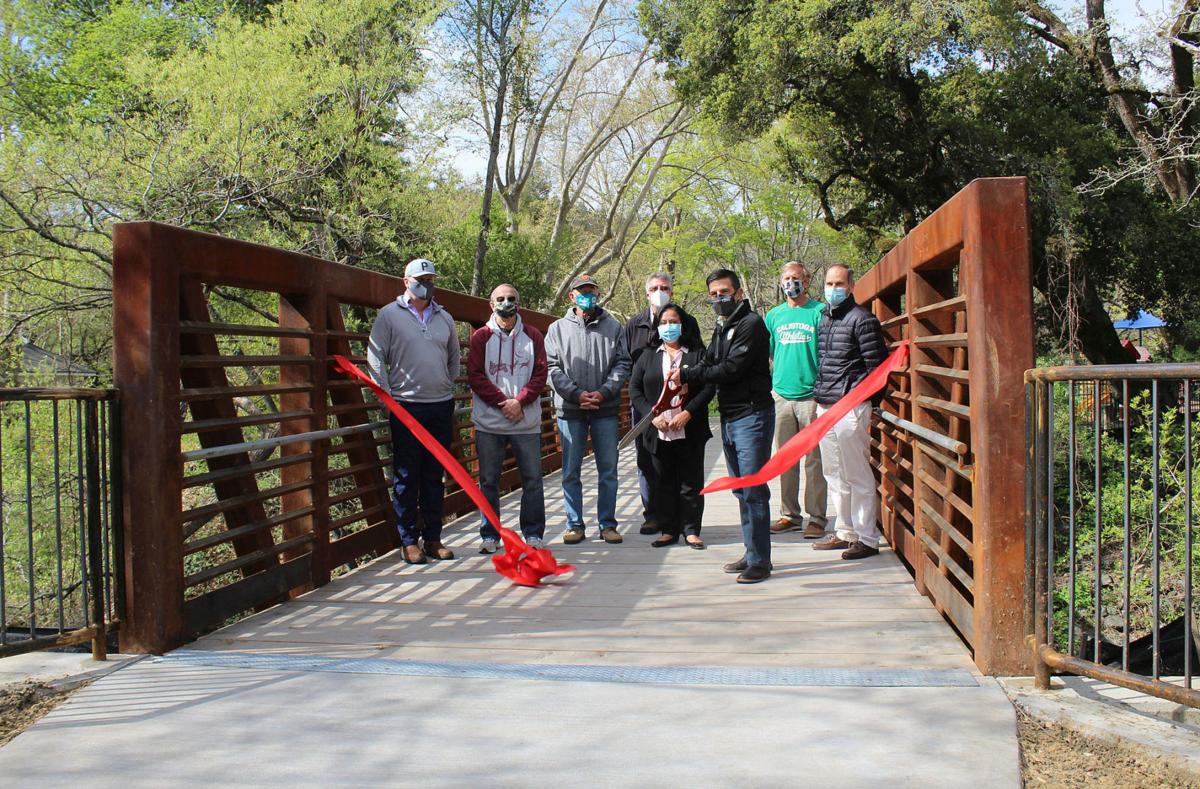 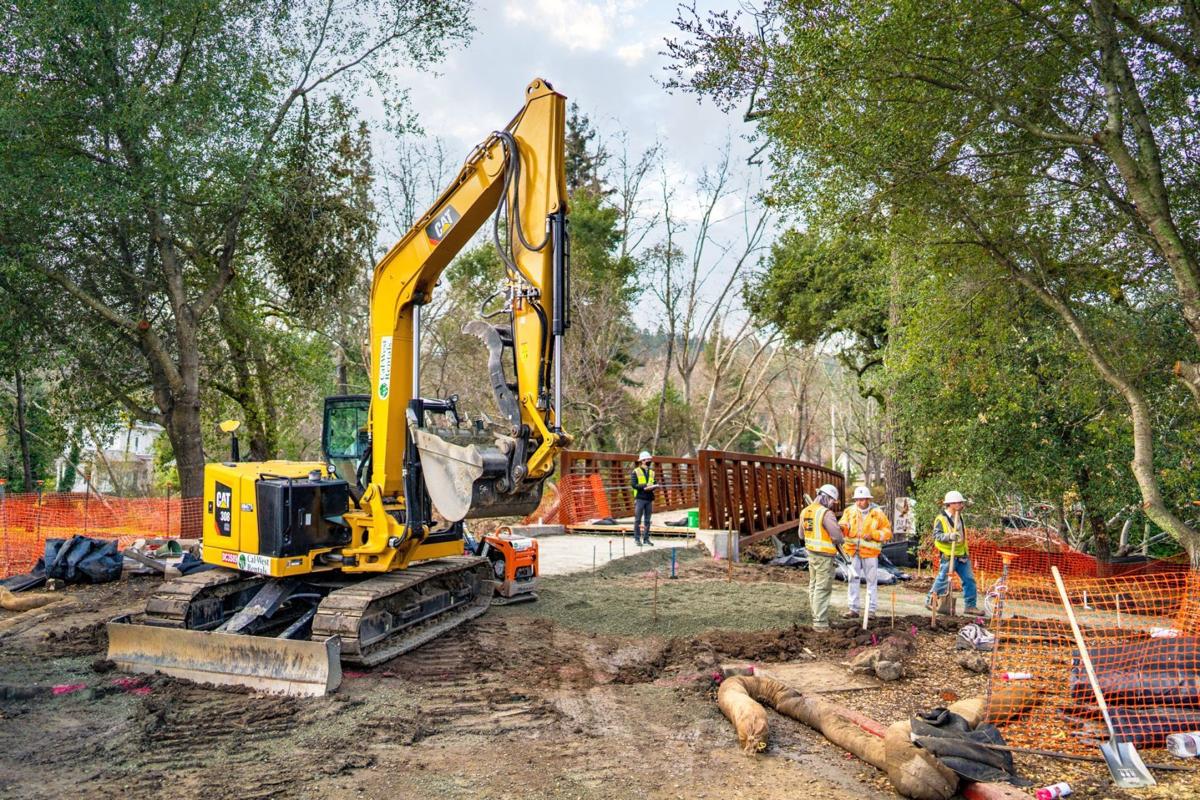 In January, workers put final touches on the new Pioneer Park Bridge that spans the Napa River in Calistoga. 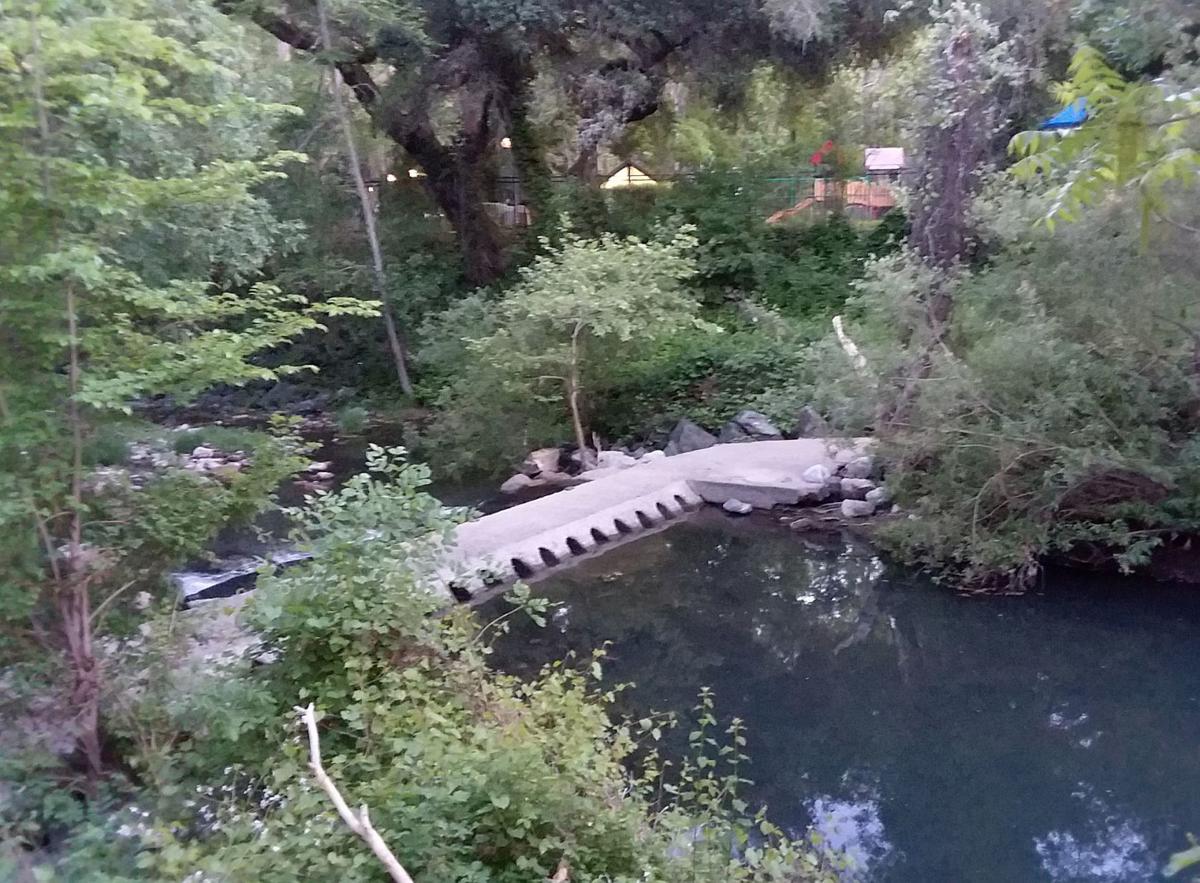 The old bridge leading from Pioneer Park to the Community Center is prone to flooding and hampers fish flow. With completion of the new elevated bridge, the old one will be removed sometime this summer.

In a large step towards making Calistoga an even more walkable, pedestrian-friendly community, the new Pioneer Park Bridge is officially open and ready for use.

The 110-foot pedestrian bridge spans the Napa River connecting Pioneer Park with the Community Center and the downtown area, and replaces the low concrete crossing, which was prone to flooding during the rainy season. The new elevated bridge complies with the Americans with Disabilities Act and offers a safer and wider crossing.

Before cutting the ribbon on Monday, Mayor Chris Canning thanked the many individuals and organizations that made the project possible including the past and current city councils, the public works department, the late Dieter Deiss, the Calistoga Active Transportation Committee and many others involved in the project.

Along with providing a wider and safer crossing, the new bridge will also improve conditions for fish habitat.

The old concrete bridge was constructed most likely in the 1950s or ’60s, when building regulations were not nearly as rigorous as they are now, said Public Works Director Derek Rayner. The old concrete barrier will be removed sometime this summer.

Adjacent to the bridge, Calistoga’s AT&T Pedestrian Pathway is now underway, with a downtown pathway along the bank of the Napa River that will connect the pathway to the bridge and Lincoln Avenue. Work on the pathway will most likely be completed by mid-to late summer.

Drone, river and bypass behind Oxbow

Plans dating back to 2009 for a downtown pathway along the bank of the Napa River will finally be initiated next month.

Calistoga's Studio on Main is closing its doors

Between the wildfires, evacuations, PSPS events, and the pandemic, the owners have decided to do something different.

Calistogans turn out for Fourth Friday March for Democracy

On Sept. 25, peaceful demonstrators carried signs and marched from the library to the Lincoln Avenue Bridge,

The City of Calistoga has started the process of updating the Housing Element of its General Plan, and is preparing for community input.

City of Calistoga issues mandate for water customers to conserve

The City of Calistoga has declared a Stage II Water emergency and starting May 1, residents and businesses will be required to conserve water.

Calistoga named one of Travel and Leisure's best small towns

Calistoga has been named one of Travel and Leisure Magazine’s 10 best small towns in California.

The City of Calistoga is sponsoring an essay contest for teens, with cash prizes, to encourage participation in local government. The deadline is April 16.

New parklets in downtown Calistoga serve as additional outdoor dining space, have been designed for curb appeal, and are here to stay throughout 2021.

To prevent further losses from power outages, Cal Mart will install a new emergency generator. Landscaping will also be added to the gravel area on Fair Way.

In January, workers put final touches on the new Pioneer Park Bridge that spans the Napa River in Calistoga.

The old bridge leading from Pioneer Park to the Community Center is prone to flooding and hampers fish flow. With completion of the new elevated bridge, the old one will be removed sometime this summer.