An artist's rendering of a proposed 50-unit apartment complex on Grant Street. 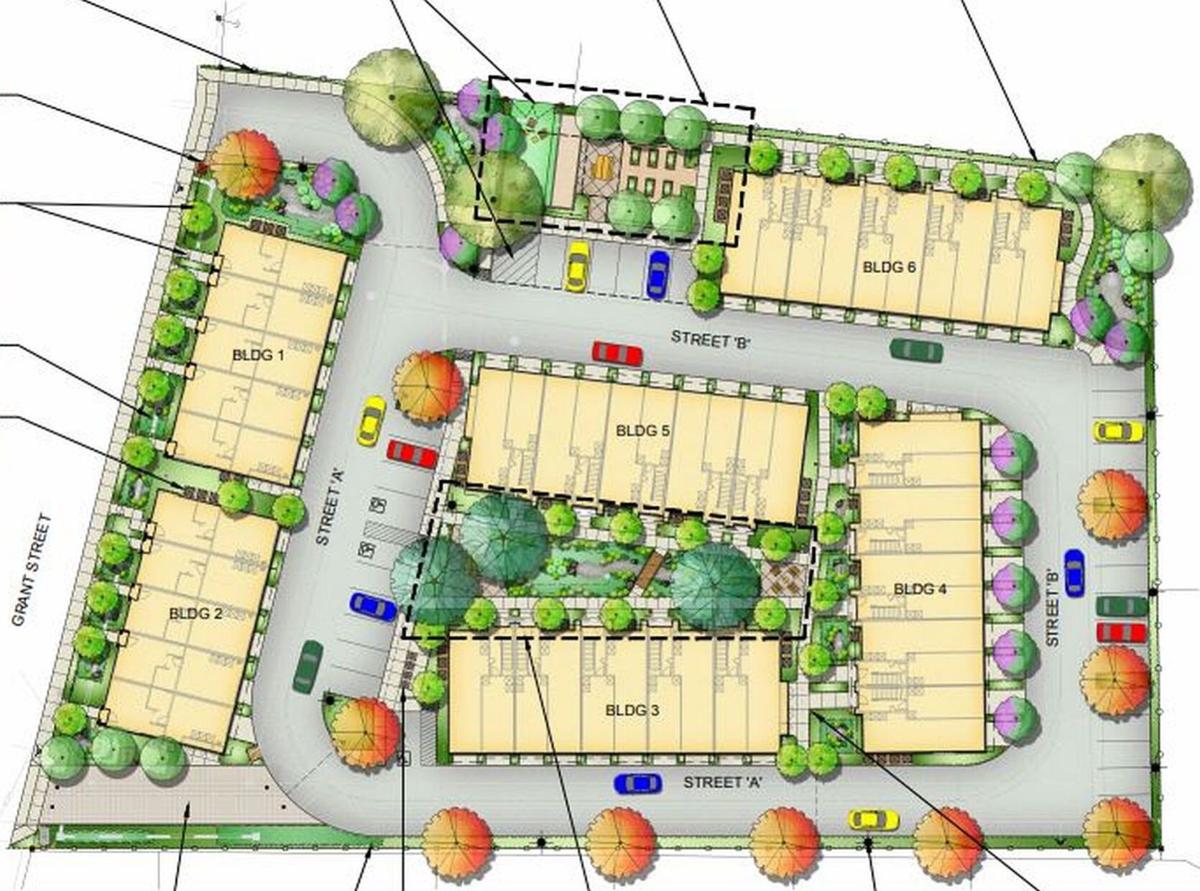 Citing the need for more affordable housing, and praising a well-thought-out design, the Calistoga Planning Commission on Jan. 27 approved a 50-unit apartment complex to be developed on Grant Street.

The property was previously approved for development in 2017-18. The current project, on almost 2 acres, calls for the demolition of two homes and an industrial building at 1408, 1410 and 1506 Grant St. The industrial building once served as Calistoga founder Sam Brannan’s livery stable, but a previous historical survey found the building does not have “historical significance.”

“There are other sites (around town) with a better connection to Brannan,” said Justin Shiu, the city’s consultant planner.

Representatives from the developer, DeNova Homes, Inc., said they plan to salvage redwood from the old building.

DeNova was also granted flexibility in the entitlement to convert the apartments to condominiums at a later date, should they choose. Representatives from DeNova said it’s not their intent to sell the property, but should market conditions change in 10-15 years, it allows flexibility without having to come back before the city.

DeNova would also serve as manager of the property, though with no on-site office.

Three different apartment designs will differentiate between one- and two-bedroom units, and a variety of design elements include open spaces, landscaping and raised garden beds, gables, balconies, and dormers.

Each unit will have at least a single garage, and DeNova Homes has also committed to improving on-street parking and sidewalks on Grant Street.

Planning Commission Vice-Chair Tim Wilkes also addressed concerns from the public regarding new construction of a three-story complex and maintaining Calistoga’s small-town character. He cited the continual need for affordable housing, especially when workers are needed for the new resort on Silverado Trail.

“We have a known deficiency of any kind of housing of this sort to fill a very real need,” he said. “We are in a rural area, and in a small town, but the only way to stay a small town, and to house the people we need to house in town, is either to grow out, as in Los Angeles, or to grow up.”

PHOTOS: CHECK OUT NAPA’S MOST EXPENSIVE HOMES IN DECEMBER

Calistoga's Roam tasting room application back before the city

Roam Antiques will be back before the city Jan. 27 with a revised proposal to add a tasting room to the Lincoln Avenue business.

The new dog park on south Washington Street shares its location with the temporary PG&E generators when they are needed.

Owners of the former Napa restaurant had sued landlord Beckstoffer Vineyards. The case had gone to arbitration.

Although projected last year at about $5 million, the City of Calistoga’s General Fund balance stands at $7.1 million.

The utility has 39 weather stations in Napa County, to monitor high-risk wildfire areas, with more planned.

The Lincoln Avenue building will be renovated and the business rebranded as VAULT Wine + Artifacts, with high-end antiques and a wine tasting component.

After a tough 2020 trying to market the city, the Calistoga Chamber of Commerce is focused on events and new promotions in 2021.

Blackbird of Calistoga closed as building gets retrofit

Blackbird of Calistoga has closed, as the downtown building is one of the last to be seismically retrofit.

Brannan Stables can and should be saved

Letter: Due its history, Brannan Stables should be saved from being turned into apartments.

Originally built around 1891, this downtown Napa historic mansion has been renovated from top to bottom. Take a look inside.

Buster’s Southern BBQ owner Charles Davis has submitted an application to the city for a permit for a new neon sign.

Amid two years of struggles, man builds St. Helena house by himself

An artist's rendering of a proposed 50-unit apartment complex on Grant Street.