Renovations to Dr. Wilkinson's Hot Springs will include moving the parking to the rear of the property and adding trees and landscaping. 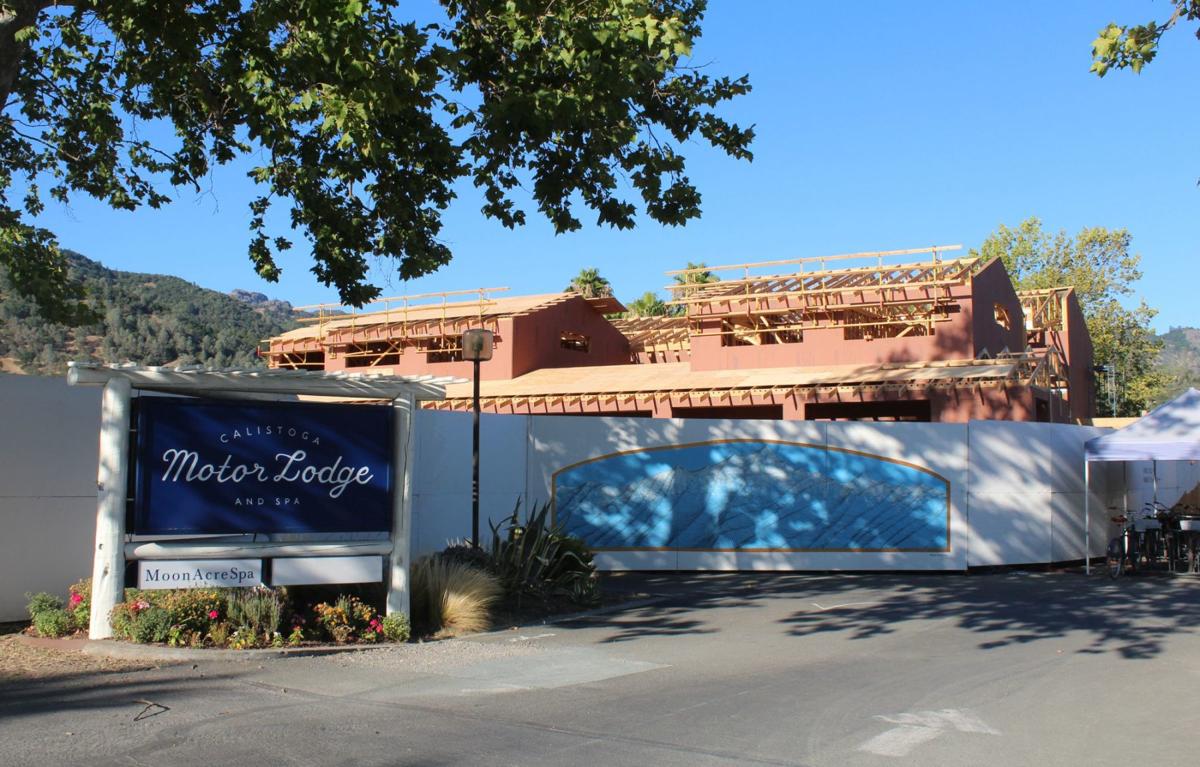 The new restaurant currently under construction at Calistoga Motor Lodge is expected to open in spring 2020.

Renovations to Dr. Wilkinson's Hot Springs will include moving the parking to the rear of the property and adding trees and landscaping.

The new restaurant currently under construction at Calistoga Motor Lodge is expected to open in spring 2020.

A few blocks further east on Lincoln Avenue, Calistoga Motor Lodge and Spa will be adding 39 rooms to its existing property.

Both projects were approved by the city planning commission on Wednesday.

The iconic Dr. Wilkinson’s was sold by the original family in April to San Francisco’s Chartres Lodging Group. The resort will be managed by Kokua Hospitality, which recently merged with Filament Hospitality, which manages the Motor Lodge.

Renovation plans for Wilkinson’s are mostly cosmetic and include new paint and landscaping. The new owners wish to keep true to the resort’s mission while renewing the character of the original 1952 resort, said Maki Bara, Chartres’ president and co-founder.

The renovation will also add a take-away food bar serving sandwiches and salads.

The resort consists of several buildings including a Victorian style house, called Edy’s, after Dr. Wilkinson’s wife, which is under review by Napa County as a historical site. Any renovations to that building must wait for that report, the city said.

Chartres also plans to keep the iconic neon sign on Lincoln Avenue, Bara said, and perhaps add smaller neon signs in keeping with that style throughout the resort.

Down the road, the Motor Lodge will be adding two buildings and 39 rooms to its property, also in keeping with the same design style as the rest of the resort.

A big coup for the city is a 24-inch, 1,200- foot sewer line the Motor Lodge has agreed to install — at considerable expense — along Lincoln Avenue to Fair Way, as part of the project.

“The people of the community ought to be thankful for that stipulation,” said Tim Wilkes, planning commission vice-chair.

The resort is also expected to bring in about $500,000 in hotel tax revenue (TOT) annually, said Lodge co-owner Christian Strobel.

In 2017, the Motor Lodge gained approval to expand with 12 rooms and a restaurant, which are now under construction. The restaurant is expected to open in spring 2020.

Other new improvements will be made to the front of the Lodge with upgrades in lighting and landscaping. The Lodge is also working with Caltrans— now on its 17th draft, Strobel said — to improve the nearby bike path and connect it with the planned Vine Trail.

The design of the new two-story buildings will also be sensitive to the area’s scenic vistas, Strobel said.

The impact of traffic with the new rooms is expected to be “less than significant” according to a traffic study prepared for the planned 78-unit Lincoln Avenue apartment complex next door, according to the staff report.

The new owners of Dr. Wilkinson’s Hot Springs Resort are on a mission to preserve and elevate the founder’s original intentions of providing a…

What should you get your sweetie for Valentine's Day?