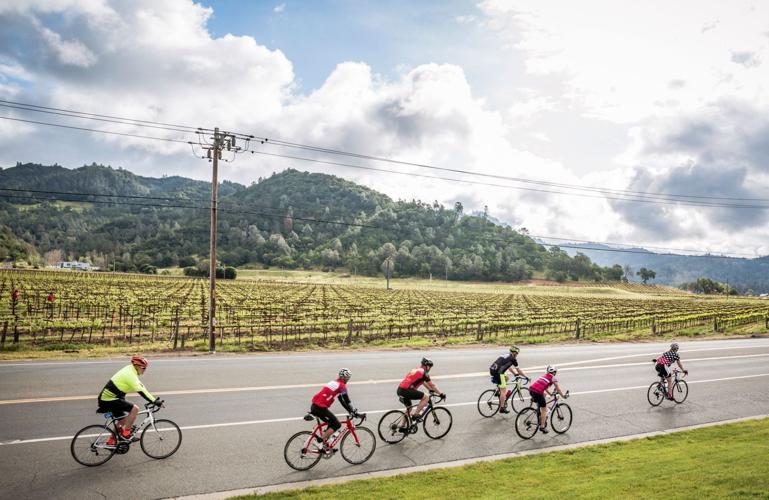 Between 200 and 300 people have registered to attend the three-day CLIF CampoVelo Napa Valley, to be held from Friday, April 26 through Sunday, April 28. Funds raised during the event will go to the Napa Valley Vine Trail and the national nonprofit, No Kid Hungry. 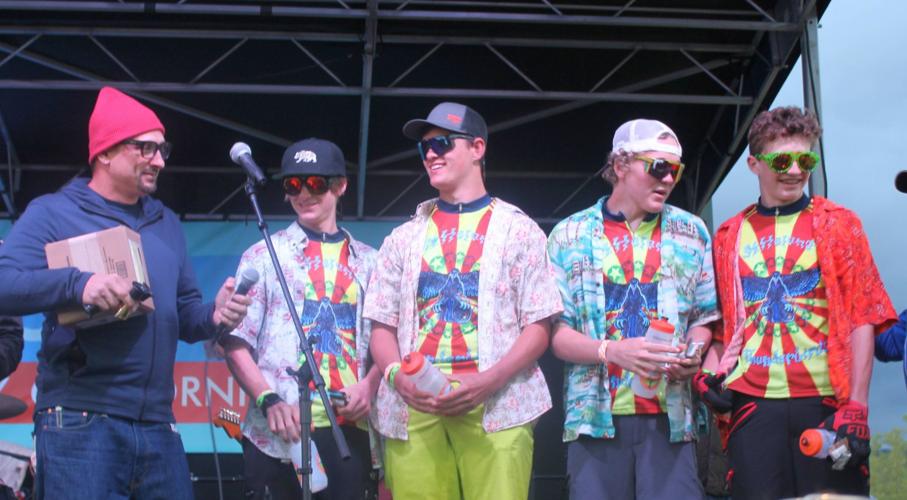 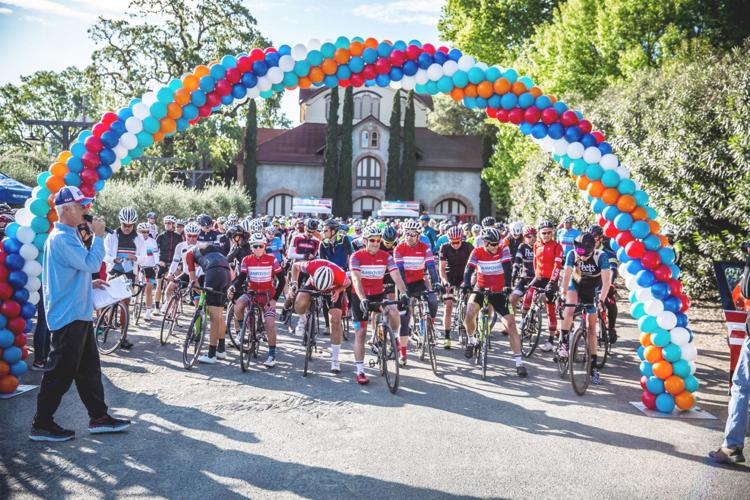 Participants of the grand fondo that is part of CLIF CampVelo Napa Valley get ready to ride one of three routes, 30, 50 or 80 miles, all starting at St. Helena's Charles Krug Winery. This year, the three-day event is from Friday, April 26 through Sunday, April 28.

Some 250 to 300 people from all over the United States will come to the Upper Napa Valley later this month to attend a three-day event called CLIF CampoVelo Napa Valley.

“The event was inspired by the word ‘camp’ when you were at summer camp. You would get up, play, pick your activities all day and go to bed exhausted,” said Rebecca Kotch, founder of Ride Napa Valley and partner with chef Chris Cosentino of CampoVelo, which is from Friday, April 26, through Sunday, April 28.

The event raises money for two beneficiaries: No Kid Hungry and the Napa Valley Vine Trail.

“We are raising money for child hunger in our country,” Kotch said. “One in five children have food-related issues, not having enough food.”

CampoVelo is just one of the many organizations raising money for No Kid Hungry. Tickets to the Friday night VIP dinner at Tamber Bey are available for $225.

On Saturday afternoon, the culinary demonstrations will be at the Calistoga Motor Lodge and Spa.

The Napa Valley Vine Trail is a local effort to build a 47-mile world-class biking and walking trail from Calistoga to Vallejo. It began in 2008, and so far some 12.5 miles of the trail have been built, from Kennedy Park in south Napa to Yountville.

“Saturday Night at the Speedway” was inspired by the cult classic film “Breaking Away” and the “Little 500,” a bike relay race held annually at Indiana University.

From 5 to 9 p.m. Saturday, April 27, teams of four will use one bike to race around the Speedway dirt track at the Napa County Fairgrounds in Calistoga. Each team member has to do one lap on a single-speed, flat pedal bike. “That’s what makes it so hard. It’s not as easy as it looks,” Kotch said. Teams will race against each other in different heats, seeking to reach the final race of the night.

Last year, the Thunderbirds, the mountain bike team from St. Helena High School, won the main event. “We had girls in pink trying to win, along with the Clifsters, chefs who were trying to win, but they couldn’t beat the high school kids,” Kotch said.

Attendance for CampoVelo participants is free; others can buy tickets for $35 at campovelo.com/" target="_blank">campovelo.com. Along with the bike relay races, food truck cuisine, wines and beers will be available for sale. Music will be provided by The Mattson 2 & Hector.

After breakfast Sunday, the gran fondo-style bike ride offers 30, 50 and 80-mile routes. Kotch said the entire weekend is all about the food. With 12 chefs offering their recipes through the weekend, the “food is really an amazing culinary experience, even at the rest stops. There is no such thing as Oreos and oranges,” Kotch said.

After the bike ride, participants will head back to Charles Krug for a pig roast feast, coordinated by chef Chris Cosentino. Along with the dozen chefs, who all play a role during the weekend, the event includes three winemakers and 10 pro cyclists, including Bob Roll, who will announce results at the Speedway event.

Tickets for one day, two days or three days are available at campovelo.com. Prices range from $185 to $755.

Kotch started Ride Napa Valley in 2012, initially as a way to show people the different routes through the Napa Valley, where to stop and get water, for instance, and to help people get more information about cycling in the Napa Valley. Today, she runs six different events, big and small.

“Ride Napa Valley is dedicated to raising money for nonprofits, doing good one pedal stroke at a time,” Kotch said.

Along with CampoVelo, Kotch also coordinates Cycle4Sight for the Rotary Club of Napa, which will be held on Saturday, April 20. Some 1,300 to 1,600 riders are expected at that event, which features three bike rides, 15, 25 and 50 miles. Money raised goes to the Enchanted Hills Camp for the Blind, located on Mount Veeder, and for veterans services through the Rotary Club.

This year will mark the second year of “Rock the Ride,” a ride-and-walk benefit for gun violence prevention. It will be held June 29 in Yountville and will include rides of 25 miles, 10 miles and a three-mile walk. Afterward, all participants will share brunch, which is “burritos and bubbles” in the park. It also includes a silent auction. Local and national leaders, including Rep. Mike Thompson, keynote speaker, are expected to attend.

“Last year, Nancy Pelosi spoke and there were congressmen and representatives from all across the country that came in,” Kotch said. “We’ll see that again this year.”

The money raised will benefit four nonprofits working to end gun violence, including Alaina’s Voice Foundation, honoring Napa’s Alaina Maria Housley, who was the victim of a mass shooting at Borderline Bar in Thousand Oaks on Nov. 7, 2018.

Kotch is in the third year of putting on the Napa9, which supports Napa Police Youth Services Bureau. On one day in September, 20 or 30 “dedicated souls” ride the nine peaks of Napa, logging in 125 miles and climbing 13,500 feet on various peaks. “It’s an all-day affair,” Kotch said.

The ride is limited to 40 cyclists. Ride Napa Valley provides sag support, volunteers at a three-to-one ratio, who are out on the course all day “making sure the cyclists get up and down safely and are fed, hydrated and given whatever they need,” Kotch said.

“It’s a huge challenge. I don’t think I could do more than three of them, much less nine,” said Kotch, who was a former bike racer when she lived in Los Angeles.

On Oct. 19, “Bikes for Tots” will be held, in conjunction with the Napa County Bicycle Coalition and the Fast Freddy organization. It includes a bike ride, lunch and a lobster party dinner at a local winery. Proceeds from the event are used to buy bikes and helmets for youth and teens and provide training on how to ride bicycles safely for children.

Kotch adds she always needs volunteers. Different shifts and tasks are available for each of the rides.

“I treat them well, feed them and give them T-shirts,” she said.

The big joke is that Napa cyclist Rebecca Kotch is so busy coordinating cycling events through Ride Napa Valley that she no longer has time to ride.

Individual event tickets are available for a Friday, April 26 benefit dinner at Calistoga’s Tamber Bey Winery that is part of the third annual…

Kotch's special events company covers it all - from 'soup to nuts'

At the Second Annual CampoVelo Napa Valley “breaking away” cycling event on Saturday evening, a new “Saturday Night at the Speedway” relay rac…

The sixth-annual Calistoga Food & Wine Event will be held Thursday, May 9, through Saturday, May 11 at Solage, in partnership with Calisto…

Ride Napa Valley's Rebecca Kotch is facing some challenges with organizing her events, including rides to raise money for various nonprofits.

Between 200 and 300 people have registered to attend the three-day CLIF CampoVelo Napa Valley, to be held from Friday, April 26 through Sunday, April 28. Funds raised during the event will go to the Napa Valley Vine Trail and the national nonprofit, No Kid Hungry.

Participants of the grand fondo that is part of CLIF CampVelo Napa Valley get ready to ride one of three routes, 30, 50 or 80 miles, all starting at St. Helena's Charles Krug Winery. This year, the three-day event is from Friday, April 26 through Sunday, April 28.