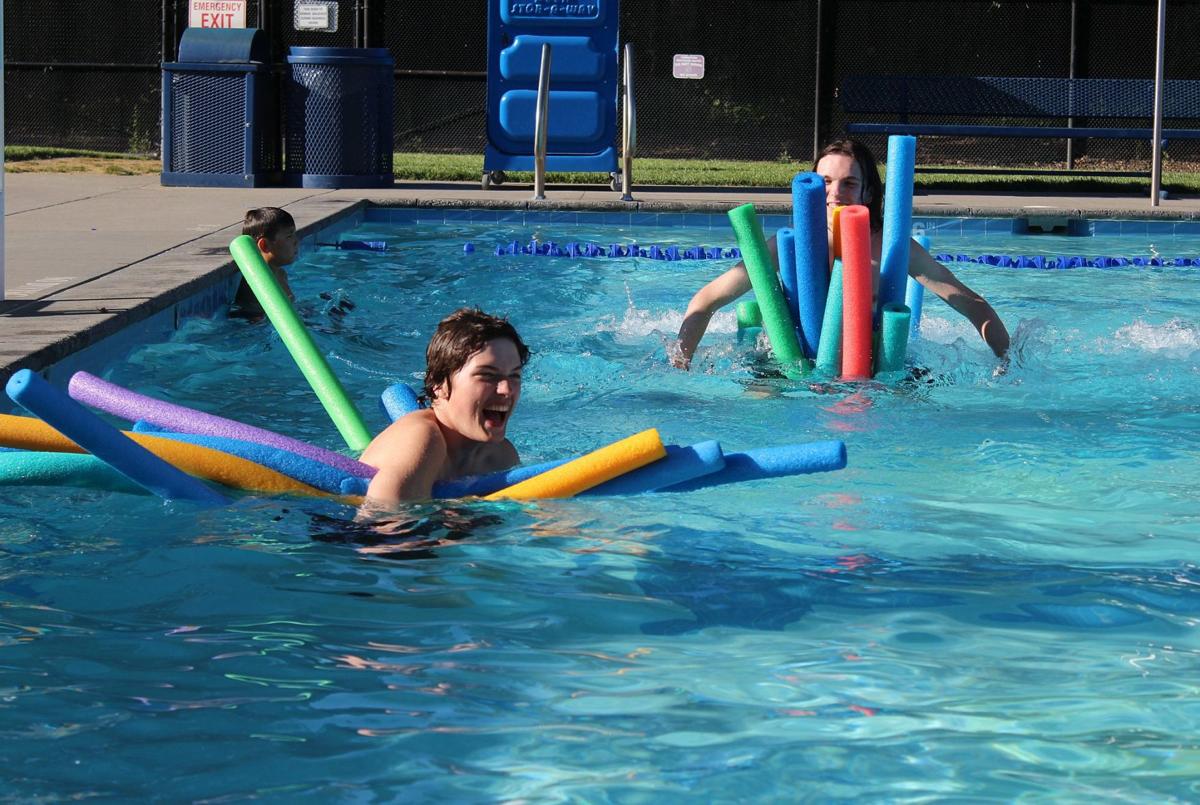 Kids and families take advantage of 'Noodle Night,' just one of the many free activities at the Calistoga Community Pool. 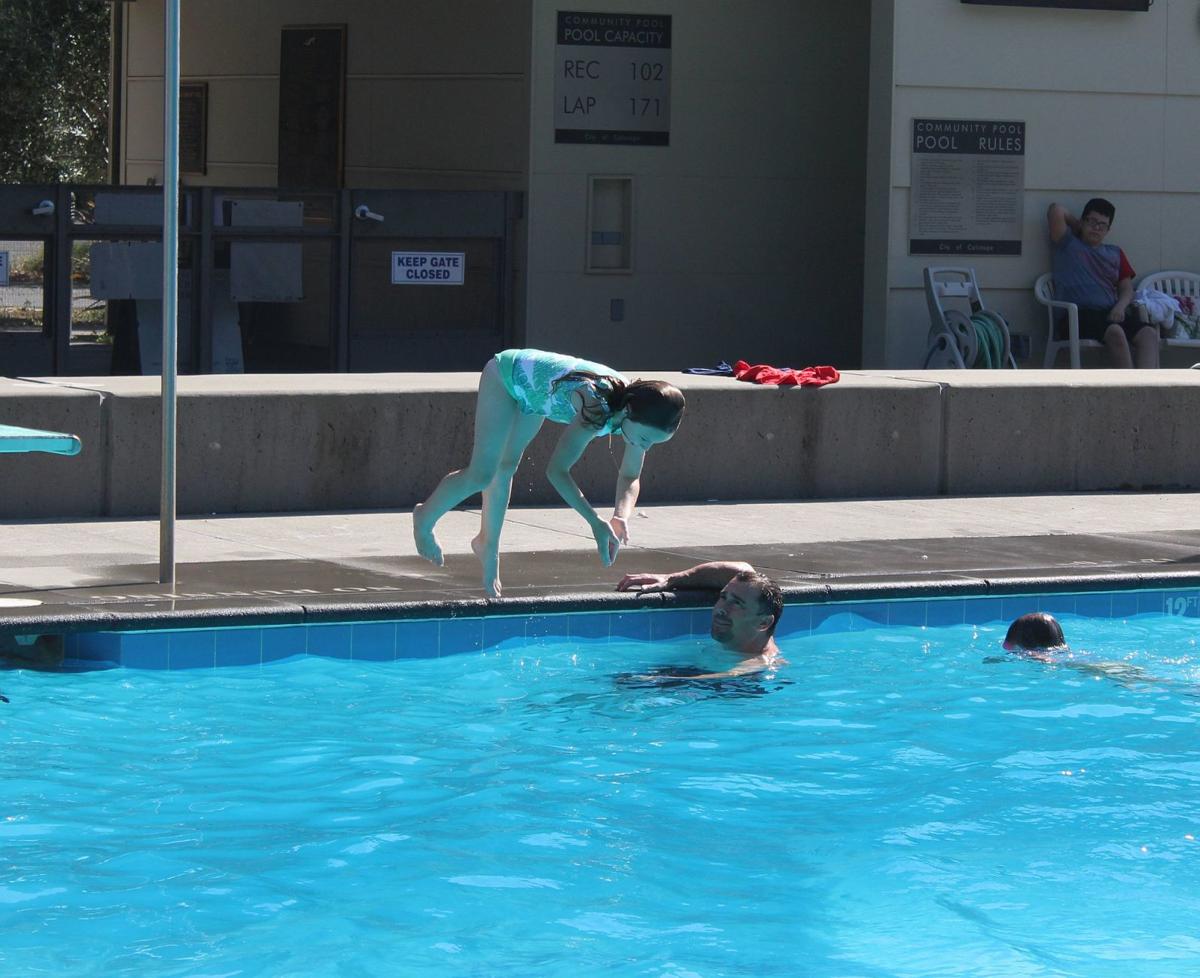 Free swimming classes are taught at Calistoga's Community Pool throughout the summer. 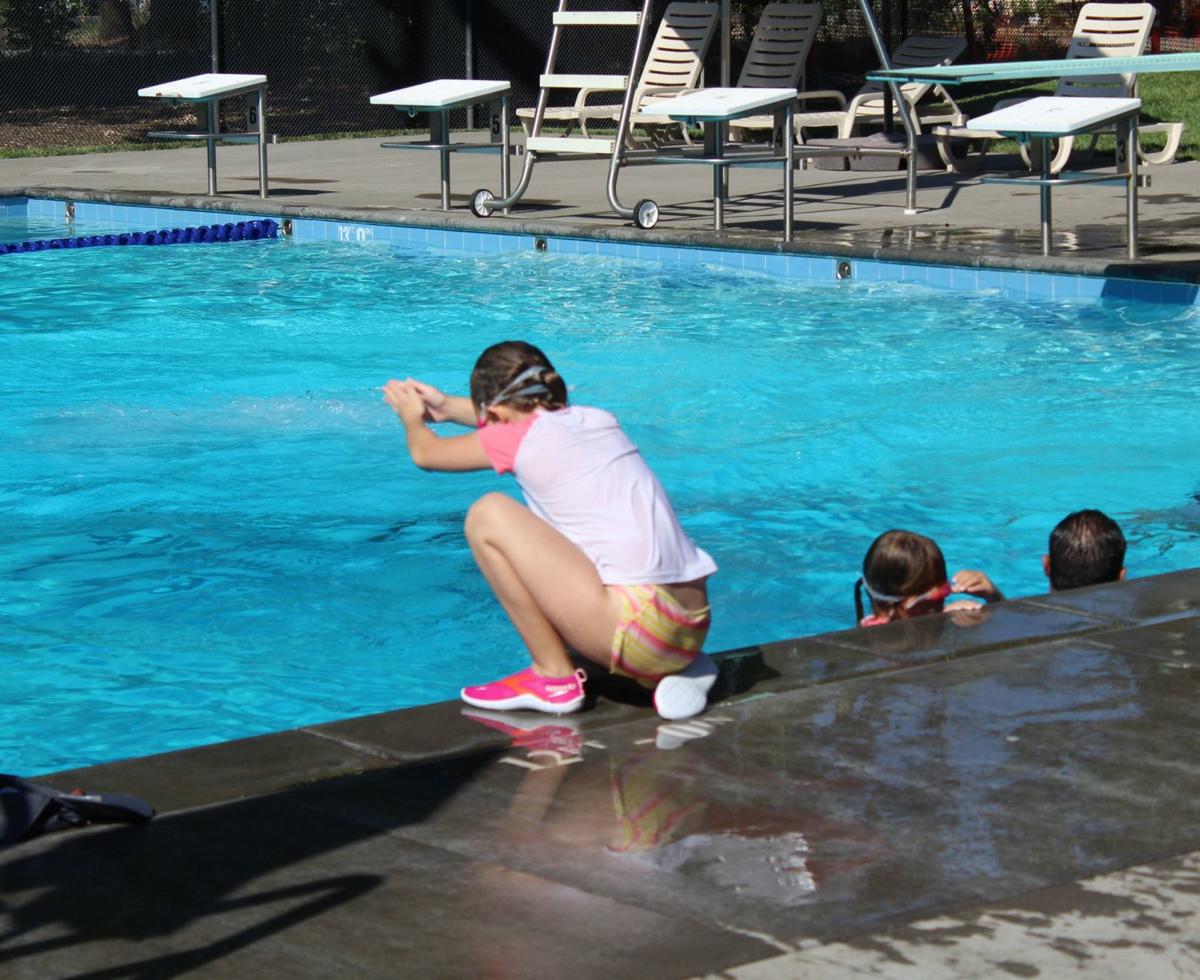 During the summer, kids practice their diving skills at Calistoga's Community Pool.

Make it free, and they will come.

This past year, Calistoga kids and adults are enjoying free recreation programs in record numbers. Yoga classes are at capacity, swimming pool memberships are way up, and summer camps are maxed out.

“People are not just signing up for activities, they are also showing up,” said Rachel Melick, Parks and Recreation director.

Previously, at a cost of $120, summer camps like soccer and tennis were hard to fill. Now, they’re full.

“At first there was a little apprehension that people would sign up for the free programs and then not show up. But that hasn’t been the case. Now that they’re free those same camps have doubled in size. We’ve been showing tremendous increase in numbers,” Melick said.

At the community pool, the Parks and Recreation department has given out 478 free memberships so far this year, compared to about 100 last year. That’s a value of $140,000. Residents do need to register and get a card this year, but overall numbers are still up, Melick said.

Melick joined the Parks and Recreation department about five years ago. Since then, the city council asked her what it would take to raise attendance and she said “make the programs free,” and that’s what they did, she said.

“Other than the police and fire departments, the recreation department is the biggest way the city has of making a difference in people’s lives,” said Gary Kraus, Calistoga city council member.

There are not many other places that offer so many free park and recreation programs.

“When we first started doing this I did some research and found one place in Florida that does something similar,” Melick said.

The city has also changed the classification of the pool and recreation programs into a city department after the arrival and organization of the programs by Melick.

“Rachel has done a heck of a job,” Kraus said.

The free parks and recreation programs started with the pool.

The community pool, at Logvy Park, was built 10 years ago, to a large extent with donations and fundraisers which brought in well over $1 million for the project, said Kraus.

The pool was well used, but the city was short on funds in general and the number of months the pool was open was limited.

“It wasn’t being utilized as much as it could have been, so the city first decided to let students swim for free,” Kraus said. And as the city’s finances improved, “It made sense to make it free for anybody from within the city.”

Finding enough lifeguards was initially an issue. When Melick started, however, she began teaching lifeguard classes. Now, with two additional instructors, 8-15 kids are trained in each class. Most of them go on to work at the pool. If they do, they don’t have to pay the fee for the class.

Meanwhile, the junior lifeguard program has doubled in size.

“It’s great because we’re training about 23 kids every season to be a lifeguard, so we’re not running into that same issue of a lack of lifeguards. It’s a great job and teaches valuable skills that you’ll have your entire life,” Melick said.

The lifeguard program draws kids from St. Helena and Angwin as well.

Recreational swimming and most swim classes at the pool are free for all residents, including adults— a $300 value which includes the popular swim aerobics class.

There is a fee for the swim team, which is contracted out to U.S.A. Swim and provides a higher level of service that gives kids access to swim meets, Melick said.

The numbers for those attending swim lessons are also way up. This year saw 93 in lessons and last year was about 27. So far this year 215 kids have come through, and this time last year it was about 80, Melick said. “So we’ve added a ton of lessons.”

The city also began to hear stories from families who couldn’t afford to put all of their kids into a program like soccer, so subsequently none of the kids were enrolled.

By making the programs free, the department was able to add more teams this year, and participation has increased by about 30 kids.

“We’re seeing more interest in our programs, and more so on the girls side of it. We’ve added a ton of kids,” Melick said, adding the soccer camp at the end of the month is already full.

“It seems to me the best thing for this community is to be as supportive as possible and to engage our youth in useful activities, and organized sports is a great way to do it. It teaches them teamwork, it’s good exercise, can you think of something better to do for kids?” Kraus said.

Parks and Recreation also partners with Calistoga Fit for free yoga classes and outdoor exercise classes in Pioneer Park and at the pool.

“I think that’s a huge part of our success with our exercise classes. It’s allowed us to have more participants in water aerobics and increased the satisfaction with the program,” Melick said.

New this year were youth dance camps in the spring which taught kids hip-hop and ballet folklorico. Between the two classes 75 kids signed up. The department would like to offer the ballet class again — it’s just a matter of finding an instructor, Melick said.

A number of park and recreation programs are beginning July 8 including a youth tennis clinic and a youth volleyball camp, and youth Soccer Camp begins July 29.

New this year is a sing a long choir on Tuesdays through July 30, for those 18 and older.

The department also partners with Rianda House, in St Helena, and adult and senior activities will continue to grow and develop, Melick said.

As you have most likely noticed by the longer days, bustling downtown and warmer temps, summer is coming. With summer we welcome a variety of …

While the Little League season may be over, the Calistoga youth baseball scene rolls on into the summer.

Boys & Girls Club Summer Camp is in full swing! The days are full of games, skits, science projects, sports, pool visits, and so much more…

A Bit of Boys & Girls Club for May

May was a month of delight at the Boys & Girls Club: We had a little bring-your-grownup-to-spa-night event, a big bustling Neighborhood Ni…

The Advising Dean: In search of equity for women athletes

When I was asked to coach our son’s Saint Lawrence O’Toole basketball team in the late 1970s, the star guard was a little girl named Jennifer.…

Remembering Apollo 11: Rianda House seniors know exactly where they were on July 20, 1969

Fifty years ago, American astronaut Neil Armstrong made history by taking the first steps on the moon. He and his Apollo 11 crewmate Buzz Aldr…

After the retirement of long-time Public Works Administrator Louise Harrison, the city is taking advantage of the vacancy to reclassify the po…

Concerts in Pioneer Park more popular than ever

Get there early is the best advice.

Using a rainbow selection of crayons and colored pencils, the eight campers at the Mini GUILD summer camp were deeply immersed as they illustr…

Boys and girls challenged themselves and each other physically and mentally by competing in the 2019 Boys & Girls Club Summer Olympics, he…

Calistoga Parks & Recreation celebrated the 10th anniversary of the Community Pool on Aug. 4 with a genuine birthday party complete with c…

A stimulating new Fall Meditation series specifically for seniors will be held at the Rianda House Senior Activity Center in St. Helena. The s…

Three Upvalley events to celebrate Elderhood, those 65 and older

For decades, Americans have defined cohorts of people of similar ages and distinctive sets of values by names that take on lives and personali…

Kids and families take advantage of 'Noodle Night,' just one of the many free activities at the Calistoga Community Pool.

Free swimming classes are taught at Calistoga's Community Pool throughout the summer.

During the summer, kids practice their diving skills at Calistoga's Community Pool.